news Patrick Schwarzenegger Had to Wear a ‘Pregnancy Belly’ for ‘The Staircase’: ‘It Was Weird’

Patrick Schwarzenegger now knows what it’s like to be pregnant. Well, kind of.

While the “Terminal List” actor’s father Arnold Schwarzenegger played a man who could conceive and carry a child in 1994 comedy “Junior,” Schwarzenegger revealed he wore a “pregnancy belly” prosthetic to show his “The Staircase” character’s physical change over the course of the HBO limited series.

“He got really heavy,” Schwarzenegger told Variety of playing real-life North Carolina resident Todd Peterson, who battles alcohol and drug abuse. “I had to wear a four-month pregnancy belly. It was weird.”

Schwarzenegger’s Todd is the son of Michael Peterson (Colin Firth) and Kathleen Peterson (Toni Collette) who are caught up in a twisted true crime case after Kathleen is found dead at the foot of the stairs. While the real Michael Peterson has slammed the HBO series for being inaccurate, co-showrunner and executive producer Maggie Cohn assured IndieWire that the show is not a documentary reenactment and takes creative liberties.

“It’s basically just allowing the viewer to know, ‘we got you,'” Cohn explained. “We’re telling a story that is familiar, but then we are making decisions that are taking you down a path that you wouldn’t have anticipated.”

Or as costume department head Jennifer Starzyk said, “There is a documentary, why would we recreate it? Go watch the documentary! We’re making our own version of the story.”

Aside from “The Staircase,” Schwarzenegger had to put on 20 pounds of muscle to star as a Navy SEAL in Prime Video’s “The Terminal List” opposite brother-in-law Chris Pratt.

“I was eating nonstop,” Schwarzenegger shared with Variety of the “fun” experience. “I had to fill out the uniform and not look like a little shrimp.”

Up next, Schwarzenegger will lead Prime Video’s “The Boys” spin-off series “Gen V” set on a superhero college campus.

Per an official synopsis, “Gen V” is an “irreverent, R-rated series that explores the lives of hormonal, competitive Supes as they put their physical, sexual, and moral boundaries to the test, competing for the best contracts in the best cities. It’s part college show, part ‘Hunger Games’ — with all the heart, satire, and raunch of ‘The Boys.’”

“It’s kind of like ‘Euphoria’ meets superheroes, I guess,” Schwarzenegger explained. “They are so secretive about what the heck happens in this show. [But] it’s ‘The Boys’! I know it’s gonna be something f**king crazy.”
Click to expand...

Like the other Kennedys of his generation, I don't see him or his siblings making waves any time soon. But he'll still be somewhat known in his own right.

Aspiring Mogul said:
Like the other Kennedys of his generation, I don't see him or his siblings making waves any time soon. But he'll still be somewhat known in his own right.
Click to expand...

He's got his shot coming up.
Lots of attention on the boys right now and he's in the spinoff 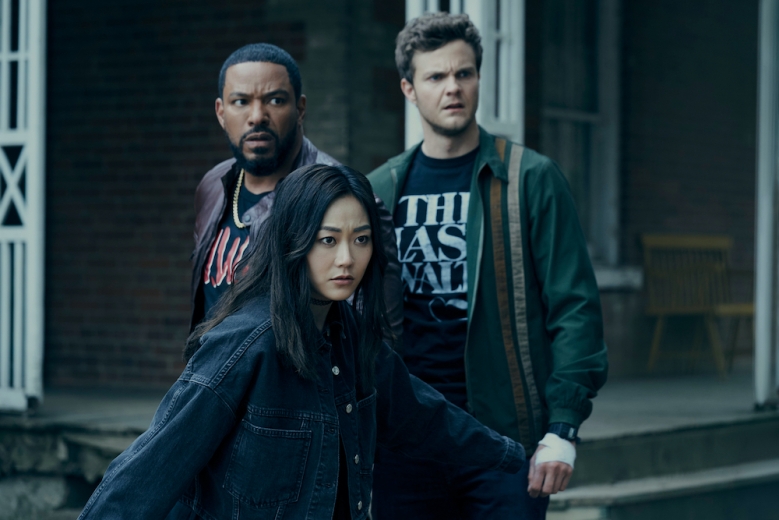 ‘The Boys’ College Spinoff Reveals Title, Promises to Be ‘Rollercoaster Filled with Blood and Guts’

Staff Member
Moderator
Most people under the age of 40 (50?) probably don't even know that he's part of the Kennedy (extended) clan.
www.maralesemann.com

news Desus and Mero Breakup Was ‘A Strategy’ Planned Over a Year in Advance, The Kid Mero Says

news Neil Gaiman on Why ‘The Sandman’ Isn’t in the DC Universe Anymore: ‘It Wandered Off Into Its Own Place’

news Zack Snyder Is Still in the DC Universe and Now Playing Himself on ‘Teen Titans Go!’