I'm working on a fluid simulation that will show a spaceship diving into the ocean. While my machine renders the images I thought I'd show you the playblast for one of the angles I'll be finalizing in the next few days.

A playblast is what Maya software calls a quick preview. It's mostly used during the development of a shot to judge the animation and camera moves.

Those quick previews have saved me more time than I could ever count.

You might consider cutting it off at about 12 seconds, since it's unlikely that the rest would be used in an edit, and it would save you 33% render time. Just a thought. Maybe you have a good reason for it to have a long tail.
Upvote 0 Downvote

I agree with you, Nate. It runs long. I wasn't considering render time but only giving people a chance to look at the water. Just a test...

UPDATE: I went to bed last night with frame 273 already in the rendering process. This morning frame 273 was still rendering. It's a low resolution test render and 10 hours later it was still rendering. Well, I stopped it. made some changes to the filter size, noise threshold, and GI . Now frame 273 has been re-rendering for an hour and 40 minutes and is nearly complete. I'm finding out exactly what I need to know; how far I can go with my resources. I can render 2 million foam and splash particles if I want but only at a low resolution. This will be of no use to me if I want to render at HD or UHD. Water and smoke and explosions are all doable but ocean water with a lot of splashing going on and being shot really close is a no no. I could probably move the camera farther away from the point of the ship impacting the water to cut down the render time considerably, but do I want to?

I'll post the rendered test as soon as I can.
Upvote 0 Downvote

UPDATE: I was able to bring down the render time on frame 273 down to 2h20m. 30 or so frames after that took just as long, but I think I'm out of the woods. The render times are down to 1h14m and going down as more and more particles die off. This is a good test! At this rate, I think the last 300 frames will render in less than 10 minutes/frame. Hang in there!
Upvote 0 Downvote

Still chugging along. I just can't bring myself to stop it even though the render time is way too high to be useful to me. I want to see this thing through.

I've learned something that I suppose I should have known but didn't. Particles, even if not visible to the eye, when they exist within a translucent mass such as a pool of blue water, they must be accounted for. Ray tracing, reflection, refraction, all of it. Each particle of foam is contributing to the light coming into the camera lens. I should have generated less foam and I should have had them die off quicker. Anyway, That's where we are. 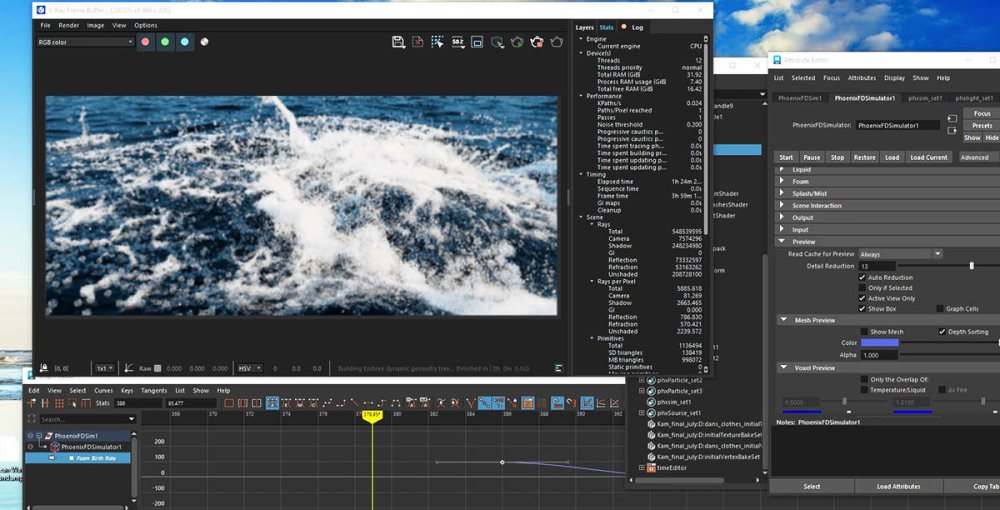 looks great, you seem to be making good progress. Particles really stack up on renders, and if you can find ways to cull them without loosing much image quality, it can provide significant speed increases. There should be some culling controls somewhere in the plugin. Particle lifespan range or something like that. A lot of people use curves on those settings so you still get some long term particles, but just less of them.

So point is, it's really impressive that you can pull off a sim of this quality. I can see from the image that you are getting a really detailed render.
Upvote 0 Downvote

Thanks, Nate. Here's something I think you will appreciate, I"m rendering at 466x200. I'm going to see how far I can go with upres'ing it using an A.I. program called Gigapixel.
Upvote 0 Downvote

I've used it. AI upscalers actually work really well. You may not get the results you want from such a low render resolution though. Upscaling has diminishing returns as you go down in original image size.

Anyway, hope it turns out well for you!
Upvote 0 Downvote

Yeah, I know what your saying. The resolution I chose for the splashdown test was simply a screen size vs render time compromise. I'm curious to see if I can push it to 500%..... I like to get as much data from a test as I can... What I'm really hope is that Gigapixel can push hd to UHD. Now here's the thing; I want to upres CGI elements with an alpha channel. I might have to extract the alpha, upscale it then put it back in using a shuffle node in Nuke unless Gigapixel can do it natively.

update: people are saying you have to extract the alpha as I described.... No problem.
Last edited: Oct 19, 2022
Upvote 0 Downvote
A

I finally have some results. I'd have to say the greatest thing I learned is that good results cost a lot,,,, of render time. Too much for the resources I have available to me. 5 hours/frame for a relatively low res output is not something I can deal with but there is something to remember about fx shots for movies; you don't render anymore that you will actually use. In my tests, I rendered the ship flying in, splashing down, then let the camera linger on the aftermath. In a real shot I might have actually only rendered 24 frames from the splashdown. Those are the most expensive frames. The ship flying around takes mere seconds to render. It's the particles that make up the splash that cost a lot.

I also ran some tests with upscaling the low res footage. It is very promising. I was able to upres the images to 400% their original size with no problem. Maybe I'll post some side by side image for comparison later. For now, here are my results. I hope you don't mind that I didn't upload the video to Youtube. Because of the resolution of the tests, 466x200 I'm afraid their upscaling would make it look like crap. Plus, using HTML5s built in ability to show video, you should be able to scroll through the video one frame at a time if you want to study it. I found you can make it play full screen and although it doesn't look great, it's not bad consider the resolution of the video.

Looks really cool! you really got a good splash effect on that main render, and the upscale worked pretty well. I liked the bonus tests also. I wish I had the time available to do this quality of render. It's really amazing the results you get when you use the full caliber sims like this. Anyway congratulations on finishing this epic render!
Upvote 0 Downvote

This has been a great R&D project so far. At present, I've got the render time for the complex frames down from 5 hours to a mere 14 minutes. I don't think there are any hardcore CGI generalists here so I won't get into the nuts and bolts but it came down to fine tuning the lights and turning off some of their physical attributes that didn't really contribute much to the final rendering. The latest clip is coming in a day or so. It might be finished tomorrow but I want to add some bonus tests to the video, and I want to show what's going on under the water that makes some of the splashes occur.
Upvote 0 Downvote

OK. Here's the final shot. I'm pretty happy with it and I learned a lot... Enjoy!

K
software Opinions on which Editing software to stay with