My IMDb war over Sylvester Stallone...

Well, I know they have their own rules, but I found him in around 6 films as an extra that I doubt anyone knew about, and only one particular movie that no one really knows of, was approved by their editors. Some guy that actually met Stallone, stole the scene from Pigeons off of an old YouTube channel I used.

I basically came across a screenshot from a rare book 3 years ago, which was posted to Craig Zablo's fan site. It is about a show called Score, or something. Well, it said 'he could be seen' in the films, Downhill Racer, Lovers and Other Strangers and a few other movies, such as Klute and Bananas. Yet a few of these movies are not even mentioned in any other book about Sly, nor his own site, or even listed on his official IMDb page. So I got copies of all the movies, and went looking for him.

On their support forum, I posted videos and images of where he appears to back up my findings, but they ended up erasing some of these credits and closing the threads, claiming they needed REAL verification. I'm aware that if you submit something on there, you need actual proof, plus you have to put uncredited in the pop down menu. But yeah, I already know this.

I also found him in other films like Mandingo, MASH and What's Up, Doc?, and I may have been the first and only person to do so, because I just followed clues from interviews and stuff, that did not reveal much. I added them on Wikipedia...

Here's what I seen, however...

Mandingo: Guy in a crowd watching a man getting hanged, and has a red hat on.
MASH: Appears as a soldier at a table for 1 second, when a guy says, "I'm the commanding officer..."
What's Up, Doc?: A blurry extra, seen for a second when Barbra Streisand is using a white telephone.

I guess rules are rules. But I also found Bruce Willis in a little known 80's movie called Prince of the City, yet that cannot be proven either. He's just sitting at a desk in the end scene to a very boring movie.

My IMDb obsession over Sylvester Stallone...

It's a tough job...but someone has to not misinform the fans. LOL!

I'm a Sly fan, so I found this info interesting.

Speaking of bit parts, I was this background extra, in Stallone's OVER THE TOP. I kept my face towards the camera, but I'm blurred. I can still tell it's me, though. 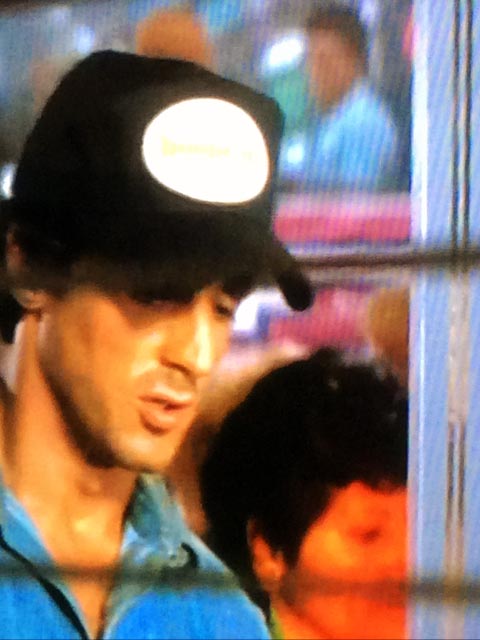 I'll take some screenshots on my phone later, and upload where he appears in the films...
P

Sounds like imdb. I got into a spat with them after they suddenly removed one of my credits from an episode of a TV show I was in. I originally had 2 episode credit, but they deleted one a year after the show for some reason. So I simply submitted the app/form whatever to have it readded and it was denied. I tried again, denied. I got snippy with them and the issue was "resolved" when they just removed me completely from the credits of the show on the site all together.

Were you just an extra? If so, I doubt you would have been credited as an actor. Sometimes for short films, you can get away with that, as they tend to have fewer people working on them, so often the extras get credited as well. I've been in things where you can hardly see me for more than a few seconds, and I got credited as stuff like Extra or Bar Customer. Those type of films are useful if you want an IMDb page where you can easily add a few true credits, no matter how small the role was. Then once that rule of theirs is bypassed, you can fill it up with a lot of uncredited parts.

IMDb is fussy about people having only uncredited parts, but if you have at least one on-screen credit, you should be able to add uncredited parts, with evidence mind you. But if you try sending them a picture of your appearance in the comments box for the edit function, try explaining that you were in the film or episode, and that this is definitely you. You can use the print screen button, or VLC Player to take a snapshot.

As for Stallone...I may just have to forget trying to get those extra parts added, because they are either not allowed to add them, or they're taken the piss. Either way, I kind of feel like I should have kept it a secret all along that I found him in these movies, but I'm not that type of person.

peteraonfilm said:
Were you just an extra? :
Click to expand...