I have heard the John Williams vs Hans Zimmer debate a million times played out over the interweb by casual fans. I'm curios to find that of actual musicians, composers and film makers, which composers are your favorite? Since I mentioned Zimmer, I'm going to jump to his immediate defense here and say that I think while he may not be the symphonic mastermind that John Williams or Howard Shore are, he is a fantastic FILM composer, and I do think his music usually does an incredible job in bringing out the emotional backbone of a movie.

That having been said, my favorite is probably Howard Shore. I also love Alexandre Desplat, John Powell and the late James Horner (I know he's not an active composer, but given how recent his tragic death I think it fare to include him).

What do you think?!
Sort by date Sort by votes

Great choice. He's definitely got the lock-down on a particular style of comedy. A talk about hard-working, he's putting out like 5 and 6 scores a year!
Upvote 0 Downvote

I love John Williams, but not his recent work, which leaves a bland taste in my mouth, especially the STAR WARS prequels. Amazing, since I loved the scores to the original trilogy. Lately, it has been Henry Jackman (KICK-ASS, KINGSMAN, X-MEN: FIRST CLASS). I'm still waiting for John Murphy to do something as significant as SUNSHINE and 28 WEEKS LATER, which I loved.

James Horner! I can't believe he died, last June, and nobody on the forum mentioned it. I just found out, as I rented SOUTH PAW, last night. The producers could not afford him, so he did the score for free! One of his last.
Last edited: Nov 22, 2015
Upvote 0 Downvote

IOTM Winner
I really like Michael Giacchino. Had the pleasure of seeing the 'Incredits' performed live in Manchester by the Halle. Blew me a away.
Upvote 0 Downvote
S

Nick Cave's soundtrack for "The Assassination of Jesse James by the Coward Robert Ford" was really quite excellent.
Upvote 0 Downvote

I stand by James Newton Howard. He's the most talented underrated composer. He's done amazing work on some of the biggest movies you've seen yet nobody ever brings his name up!
Upvote 0 Downvote

Zimmer's scores all sound the same! The only time they're interesting is when he collaborates with other composers. He and Junkie XL killed with Supe.v.Bat, and then of course there's Gladiator.

But c'mon. Are you kidding me? John Williams is the Michael Jordan of film scores, I don't know how anyone would even try to debate that.

I think Bear McCreary is a name to keep an eye on. His score for 10 Cloverfield Lane is amazing!
Upvote 0 Downvote

I agree. No one touches vintage Williams (JAWS, STAR WARS, RAIDERS, and ET). Loved his work since GILLIGAN'S ISLAND and LOST IN SPACE. After RETURN OF THE JEDI, I felt his quality go way down, around the same time he starting devoting a lot of time to the Boston Pops. I think it was 9 months of the year, compared to 3 months that allowed for movie scoring. Some people may be comparing the latter part of his career to what Hans has been doing.

I was really disappointed in INTERSTELLAR and that over-used organ type sound. On the other hand.... INCEPTION really connected with me. Brilliant work!


I loved that director, Nolan, cranked the score on that movie. He also cranked it with Interstellar, but that technique annoyed me on that one. I've also enjoyed the BATMAN BEGINS and DARK KNIGHT (Zimmer working along side James Newton Howard). Interesting technique of fleshing out a minimalistic 2 note theme and making huge layers and sequences out of it. I like MAN OF STEEL, also.

moonshieldmedia said:
I stand by James Newton Howard. He's the most talented underrated composer. He's done amazing work on some of the biggest movies you've seen yet nobody ever brings his name up!
Click to expand...

I was just rewatching THE SIXTH SENSE and was noticing how much the score elevated that slow paced, but excellent movie. Talk about giving something a voice.

Oh, and someone to watch out for would be Dean Valentine. He scored trailers for PROMETHEUS ("BUUUUM....BUUUUMM!"), INTERSTELLAR, THE MARTIAN, FURY, and this:

One of my current favorites is Michael Giacchino.

He started out scoring video games, moved to TV (Lost, Alias, Fringe, & Six Degrees among others). His film work includes:

Michael Giaccino, good stuff. I didn't know his name before today, but I like all of those scores (the ones I've seen/heard anyway). Ditto that for Dean Valentine. Scoopic, the music you linked of his almost sounds like a what would happen if Elfman and Zimmer collaborated.

As far as Williams is concerned, it is my opinion that he's still at the top of his game. I don't agree that there's been any drop-off in quality or innovation. His score is damn-near the only reason to watch any of the Star Wars prequels, and I think the music was just as good in Force Awakens. And frankly, I'm stunned that anyone would suggest his quality of worked dropped off after Jedi. I mean, Jurassic Park!!!

I'm also eager to see what comes of Junkie XL. I think his collaboration with Zimmer on Supe.v.Bat was fantastic, and I LOVED what he did for Fury Road.

Alcove, press "quote" and you'll see how I linked the YT video you meant to link.

Yup, I was tired. I forgot the behind the "=" thing.
Upvote 0 Downvote

Alcove Audio said:
Yup, I was tired. I forgot the behind the "=" thing.
Click to expand...

I had a feeling it was just a brain-fart.

Disclaimer: The following is just my personal opinion. Music is different for each person. Keep in mind, I like dark, muscular, thematic orchestra and throbbing synths (Tangerine Dream sounds, ROBOCOP and STARSHIP TROOPERS, etc.).

After seeing the movie, replayed, about a month ago, I Amazon ordered the MEET JOE BLACK CD (yes I live in the past) It has one or two themes that blow me away - up there with the best, but the CD as a whole is kind of boring for me.

Cracker Funk said:
And frankly, I'm stunned that anyone would suggest his quality of worked dropped off after Jedi. I mean, Jurassic Park!!!
Click to expand...

I stand by what I said, though I reworded this paragraph to say that JURASSIC PARK is an exception. The main theme is fantastic. The rest of the score seemed good, but not enough to make me want to hear it in isolation...until this conversation. Perhaps, I'll give it a closer listen.

I believe that Williams peaked with EMPIRE (Vader's theme, the Asteroid Field, the wonderful heroes' themes, Bopa Fett, etc.) and E.T. When RETURN OF THE JEDI came out, it was the first time I was a little disappointed with a STAR WARS score. (A lot could have been the tone with the Ewoks involved. I can't stand them.) It was really good, but not up to his previous work. Also, the original release didn't have the best part - some of the Emperor scenes and the choir theme as Luke beats down Vader. I since got the full version and that made it much better. 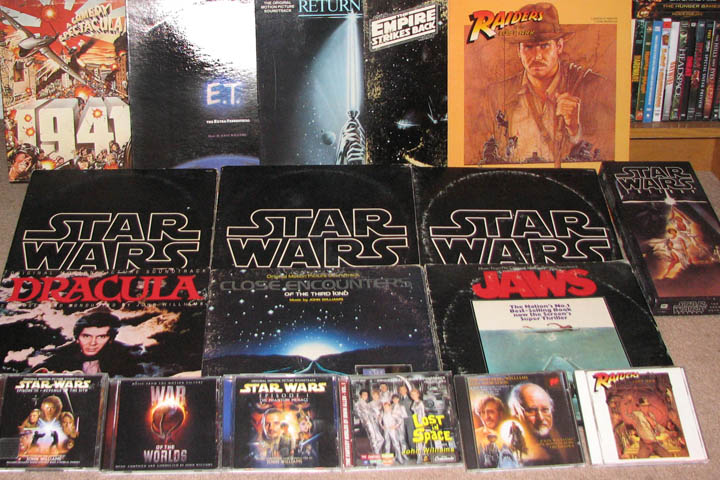 As for the other scores since? You see what's in my picture. There is little outside of that J.W. collection that makes me want to listen further. WAR OF THE WORLDS and the new STAR WARS stuff sounded so empty to me. Sure, I liked the Dual of the Fates theme and the Anakin and Padme love theme. There was another, too. The rest didn't call to me, at all.

I'm a guy who bought 3 double albums of the original STAR WARS score, because I kept wearing them out on my record player. (Thank goodness for CDs.) Every song was great. The motifs of LOST IN SPACE were being channeled and elevated in a magnificent way. The first time I heard STAR WARS, it was already familiar to me.


So what happened? Was I just getting older? Nope. Scores like Steve Jablonsky's TRANSFORMERS and Danny Elfman's Music For A Darkened Theater compilations were blowing me away. The scores to OBLIVION and EDGE OF TOMORROW are fabulous. The former wakes me up, every morning.

Again, this is all my opinion. If I told you I went gaga over Bear McCreary's EUROPA REPORT soundtrack, you might think I'm crazy.

IOTM Winner
I wish I'd mentioned the theme from the 'Thin Red Line' by Hans Zimmer. One of my favourites ever. When he's on his game he's ace. When he's Batman V Supermanning he's headache inducing.

Oh and 'Evey Reborn' from V for Vendetta. https://open.spotify.com/artist/0s1ec6aPpRZ4DCj15w1EFg

For me it is absolutely Howard Shore.
Upvote 0 Downvote
You must log in or register to reply here.

C
South African with a Master's Degree in Film Scoring