hollywood Ever Wonder Why Hollywood is At a Creative Low?

Sort of seen the general creative and unique qualities of Hollywood films degrade a bit over the last 2 decades? I certainly have...especially when it comes to SciFi and Fantasy, but there is also a massive lack of good action and adventure films....have not really seen anything that gives me the feeling that awesome action, scifi, fantasy films used to give back in the 80's and 90's...It's really pathetic. And if you don't agree no worries...the general public certainly agrees with me, as well as the critics, professors, famous filmmakers, etc. Well, I can tell you exactly why this has happend, it is because of insecure, old guard bastards like this clown: 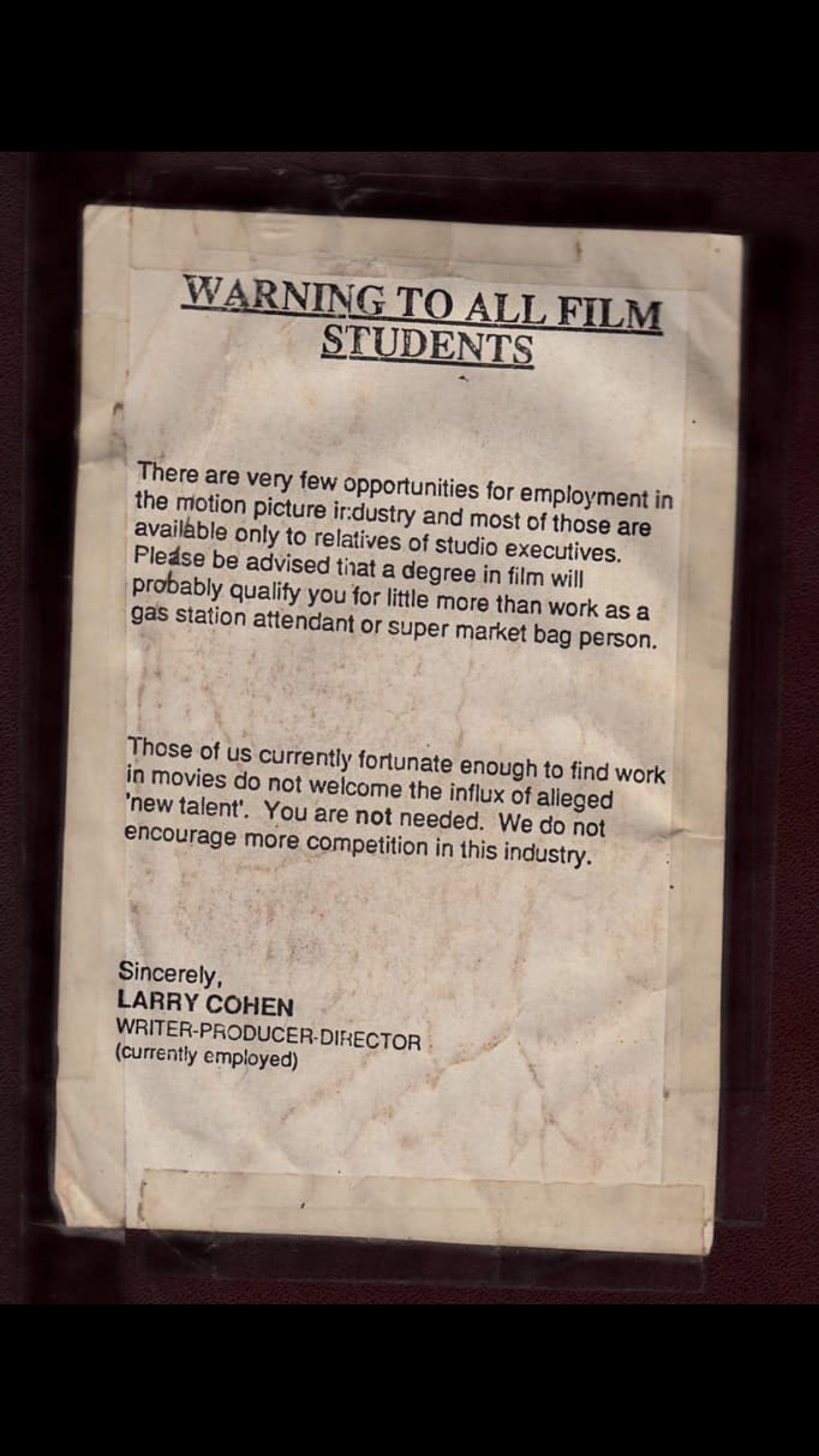 If several producers like this guy ACTIVELY work to stop younger talent from having opportunities in the biz (it's a lot easier for folks to do that than you think. They just call up that executive or producer they know and badmouth a person, or even just guilt em a bit about hiring someone else...seen it happen) If they do this, for several decades, you get an industry full of 80 year olds that slow down, or stop entirely...or die, like that guy, and you are left with...nothing. He worked his entire career to stop young talent...and now that he's gone....there is no new talent lol. It's simple logic.

Good god the old guard took a giant dumb on the industry, and left it in ruins when they were done lol. And we have to clean up their crap, and deal with their mistakes. Last music video I did in Los Angeles, every location I dealt with was extra cautious, extra money, extra DIFFICULT because of the mistakes and bad treatment laid at the location owners by the careless, selfish, dishonorable old guard hollywood filmmakers. We are literally paying for all their mistakes.

Practice good filmmaking and business ethics. Don't be threatened by other filmmakers like that Larry Cohen guy up there...Don't be so insecure that you cripple the progress of the cinematic art. Again, follow the filmmaker's code of ethics...don't leave filmmaking resources and the general attitude of your city toward filmmaking in a state of chaos and disorder. Don't crap on the industry and the art like Larry Cohen.

He had poor experiences with film students. Guys like me would come in
willing to do anything and learn on the job. Far too many film students
looked down on ultra-low budget film making; “At USC we have equipment
that works...” was a common statement. We just made it work. Those
who thought of themselves as “new talent” looked down on those of us
who thought of ourselves as “workers”. And Larry didn't like them much.

He was a wonderful character and very respectful to his crews. He never
looked at film making as “art”. He just loved working.

I'm sad he has passed.
C

I appreciate that someone that knew the guy came in here to reply, thanks.

However by what you are saying it stills sounds like the guy had a bone to pick with young, talented filmmakers. It sounds like he appreciated crew that helped him with his projects, and was threatened by young filmmakers that knew how to make their own films. I know a lot of folks that don't consider film "art," but love working, respect their crews...and look the other way when there is a young talented director because, well, another young talented directed is a threat.

However, I am glad to hear he was respectful and hired young crew.

Directors are typically the one that have nearly all the responsibility for making a good film, and are CERTAINLY the only ones that will be blamed and shat on if the film is bad, and since so much of the film has to come from their head, and it's all riding on their shoulders and their reputation is on the line, I really do separate folks that work as crew primarily from a person that is through and through, to their death, someone that directs films and wants to earn the privilege to control that process creatively from start to finish. The risks and asks are just monumentally different.
C

Also, just adding something...I REALLY am bothered by the above attitude in the industry.

People working in Hollywood that don't consider filmmaking an art, is really just the bottom of the barrel for me. They remind me of lawyers or salesmen that are just trying to earn a buck. Really not the place that I'm coming from at all...makes me cringe.

I know I have to work with em, and doing that with a smile on my face was a huge learning process.

Never look down on anyone that helps you achieve your dream

sfoster said:
If you work with enough "artists" you might change your mind on that hahaha
Artists are much more difficult to work with than a union laborer and if im directing it's about my vision coming to life not theirs

Never look down on anyone that helps you achieve your dream
Click to expand...

This is a tricky thing man. The process needs to feel rewarding for everybody and sometimes money wont cut it. So they try to extract fulfillment by adding their own personal touch to a project. Take actors for example. We're told from the very beginning of the creative process ( screen writing ) to leave room for actors cause they don't like to be dictated how to act with specific details ( same thing goes for directors too ). Now this is not always a bad thing, on the contrary it proves extremely productive as spontaneous acting sometimes prove to be better than what was originally intended. But sometimes these urges by the crew to interfere with the filmmaker's vision is hard to take. as a project that was intended to show something very specific drifts off to somewhere that the writer/director didn't intend for. And sometimes it deviates for the worst.

yeah actors can bring a lot to the table but when youre filming you dont want 30 different crew members bombarding you with creative suggestions.

CamDoz said:
People working in Hollywood that don't consider filmmaking an art, is really just the bottom of the barrel for me. They remind me of lawyers or salesmen that are just trying to earn a buck. Really not the place that I'm coming from at all...makes me cringe.

I know I have to work with em, and doing that with a smile on my face was a huge learning process.
Click to expand...

Many come to this point by working for far too many people who expect them to work long hours across multiple days for atrocious money and expect them to enjoy it because it’s ‘art’ and one must ‘suffer’ sometimes in creating said ‘art’.

And half the time, said ‘art’ is some newbie Writer/Director’s passion project that he somehow got funded and is not particularly good.

So I understand how some can get jaded, though that doesn’t mean I want to actively work with those who are jaded to the point that they are extremely difficult to work with.

Healthy perspective is often warranted on both sides of that coin.

As for the supposed creative dearth in Hollywood, it depends on what you classify as Hollywood. Certainly there are plenty of new, creative somewhat risk-taking stories and productions on platforms such as Netflix, Hulu, HBO, Amazon etc etc. and many of them are shot in Los Angeles.

The traditional studios aren’t taking as many creative risks, nor are they risking as much on the indie films being snapped up by the streaming services. It’s easier and safer to bank on existing franchises and series’ and capitalise on an existing fan base.

Tackling and/or ‘fixing’ that is about much more than an old guard not interested in new or younger filmmakers. Certainly, from my perspective there are more outlets and opportunities for new and younger filmmakers to take creative risks, make money and forge a career than ever before.
Last edited: Mar 30, 2019

CamDoz said:
However by what you are saying it stills sounds like the guy had a bone to pick with young, talented filmmakers.
Click to expand...

He didn't have a bone to pick with young talent. Not in my experience
knowing him. That note you posted was “tongue-in-cheek” from a director
who was a provocative guy. He never once – that I heard of – looked
the other way when a young, talented director ask his advice. You have
never heard of an example of Larry Cohen standing in the way of a
young, talented director making their first movie.


CamDoz said:
Really not the place that I'm coming from at all...makes me cringe.
Click to expand...

I'm sorry it makes you cringe.

There are many different perspectives and it can be wise to understand
and even respect the reasons people make movies. Putting people down
(“bottom of the barrel”) for having a different perspective than you
seems counter productive to me. Almost as if you are suggesting you
are somehow better than them.

Many see film making as a craft. A method of telling a story. They love
the craft but don't see it as art. I see nothing bothersome about that
opinion. You and I come to making movies from a different perspective
yet we both want the same thing; to make a living doing what we love.

I respectfully disagree with the premise of this thread. I think Hollywood is putting out some wonderful movies. My opinion on why it's so common for people to think that Hollywood movies are worse than ever -- there's more of them. It's true that, a long time ago, many Hollywood producers learned that all they need to turn a profit is a big name lead actxr and a massive advertising campaign. Even if the movie sucks, they'll make enough money on opening weekend, by inundating the multiplexes with multiple screenings of the movie, to likely turn a profit or at least break even (especially with all the "creative" accounting techniques they employ).

So, yeah, most of the movies are shit. But there are still plenty of good ones out there, being produced by major studios. Some of them go unnoticed but catch a new life in streaming/blu-ray, but the big ones do quite well. Personally, I think "Endgame" is a fantastic movie, and so I'm not surprised to learn that just today it passed "Avatar" as the highest grossing film of all time.

Currently I am very impressed by the amount of documentaries that are on the Criterion Collection and Netflix. They may not be traditional Hollywood released movies but as a viewer it's a great option.