Staff Member
Moderator
Remember back in 2006?
A team of lacrosse players from Duke allegedy raped a stripper.

The whole nation was up in arms, the coach got fired, the players lives got ruined, and the media MADE SO MUCH FUSS.
It's really insane that I only just learned that it was all made up - false - fake - lies - no rape.

The woman who said they raped her?? She is in prison right now for MURDERING HER BOYFRIEND - stabbed him to death.
A complete psycho.

Truly insane the media would make so much noise about this case and then not one single peep when the truth came out.
Maybe the reporters didn't want to make themselves look bad? for beliving her?

What one of the lacrosse players had to say about it --
when he first learned he was being fasely accused of being a psycho rapist, he made light of the situation, joking in an email to a friend with an american psycho refernece. that email went public and everyone took it out of context.

Would he always be “the kid who wrote this completely repulsive e-mail,” who “must be a sociopath” and “unstable?” But he was also frustrated. “Nobody ever gave me any opportunity to explain myself,” he says.

By the time they arrived back in New Jersey, a horde of television trucks and newspaper photographers were lined up in front of their house. “We pull into the house, walk up, and my three sisters and my mom are all pretty teary-eyed watching the news,” McFadyen recalls. “The news anchor was just like, ‘What a sick, twisted kid. This kid’s parents must really be ashamed,’ or something like that. And I’m with my parents, and all my little sisters are there.
Click to expand...

Wikipedia article on the stripper that lied about being raped:

Vanity Fair article from 2014 that details the incident. 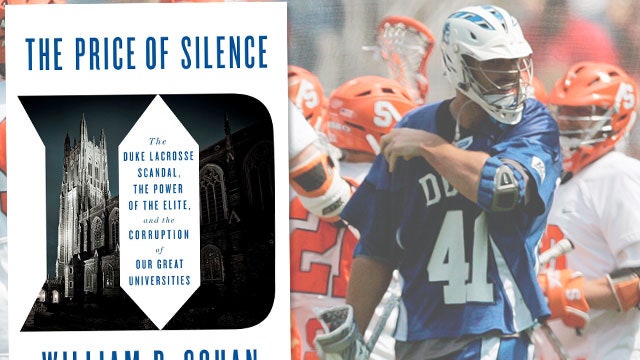 The Duke Lacrosse Player Still Outrunning His Past

Staff Member
Moderator
I remember very clearly when the charges were dropped - but that might be because my sister went to Duke Law School, so I'm always tuned in to stories about the school. It would be a good basis for a movie - fictionalized to avoid having to pay for the rights, of course.
Last edited: Apr 9, 2022
www.maralesemann.com

Staff Member
Moderator
I had dinner with my family tonight so I asked all of them.
They all remembered the duke lacrosse rape story. None of them heard it was fabricated.

For sixteen years everytime one of us would hear duke we would think rapists.
Last edited: Apr 9, 2022

Staff Member
Moderator
This is the fairly long article that ran in the NY Times the day all charges were dropped.
While I'm sure the media didn't play it up as much as the original account, it WAS covered.
Maybe it's human nature to remember accusations rather than resolutions.
https://www.nytimes.com/2007/04/12/us/12duke.html
Last edited: Apr 9, 2022
www.maralesemann.com

mlesemann said:
This is the fairly long article that ran in the NY Times the day all charges were dropped.
While I'm sure the media didn't play it up as much as the original account, it WAS covered.
Maybe it's human nature to remember accusations rather than resolutions.
https://www.nytimes.com/2007/04/12/us/12duke.html
Click to expand...

I don't read the newspaper so I wouldn't have seen that.. back in those days? probably got my news from stuff like the daily show
but my family didnt recall this either and they are some pretty smart people.

i think its just not as sensational as a duke rapist saying he wanted to kill women and wear their skin, taking some silence of the lambs joke out of context to make him look like a monster and ruin his life.

This is unfortunately another instance where I wrote a long and interesting reply and had to delete it.

I can give a more tame response about news cycles though. I pilot drones sometimes to get aerial shots, and there are more and more laws against drones, driven by fear and folktales.

The origin of this grand overreaction was a national news story. The story was that a drone had been sucked into the intake of a jet in flight, piloted by an unregulated rc pilot and crashed the plane. The AP picked up the story and broadcast it across the world within 24 hours. 2 days later, they were investigating the plane, and it came to light that it was actually just a large bird that had gotten sucked into the engine. The company that owned the plane contacted the press immediately, and gave them the correct information.

The press replied "people aren't interested in hearing a story about how a drone didn't crash a plane" and the correction did go out, but only to about 1% of the readership of the original news.

After this, a huge wave of politicians began to integrate anti drone laws, campaigning on the promise to protect citizens from plane crashes, and these unlicensed murderers of the sky. There are now 1000s of anti drone laws, the final culmination of which is that pilots have to complete an exam that asks childishly simple questions, and then charges hundreds of dollars as a processing fee for grading the single page of these. To this day no one seems to know that no drone has ever crashed a plane, but people are still attacking them, in the name of justice, freedom, and re-election through fearmongering.

And to head off discussions about peeping toms using drones, (which I've heard a lot of), I've piloted drones for hundreds of hours, and never seen through a window. It's an optics science thing. You can't fly with a narrow field of view, so any one window is usually a few pixels across. Dip down below the tree line, and you're likely to crash into something you can't see, brighter outside than inside, windows look black, fly at night at low altitude, you will definitely crash. When I was filming a nature film from 500ft in the air, I was regularly accosted by locals who would run up and accuse me of spying on them.. About the only spying you can do with a drone is being able to follow a car, or larger object. But they were angry, because of a news story that never got redacted.
Last edited: Apr 9, 2022
You must log in or register to reply here.

news These Moments in ‘The Crown’ Season 5 Seem Beyond Belief — but Are They?