Here's a test I ran for my upcoming production which will feature claymation characters that are actually CGI. I learned a lot from the test. Mostly, I learned that I don't like keyframe animating CGI characters. I think it will be well worth the money to invest in a motion capture system so that around 90% of the animation can be captured from a person wearing a bunch of sensors hooked to their body.

I'll apologize in advance for some of the behind the scenes footage in this video. My screen capture software started acting up and I'm too tired to figure it out right now. Anyway, enjoy!

The video is 3 minutes long.

Looks great man, the matchmoving is perfect! You should have this guy surf on the roof of a car in traffic.
Upvote 0 Downvote

Staff Member
Moderator
Theres lots of great budget solutions for body tracking, i have one full body tracker I had bought just for VR gaming called walkovr, not that i ever used it lol
Upvote 0 Downvote

Yeah, for this project the CGI has to interact with the real world a lot. I've found some people on Youtube who do that sort of a thing for a living. It's clear there's a lot more to motion tracking than just setting up the software. Some people have a true talent for it and can track anything. For me, I need there to be a lot of good tracking points in the shot and as little motion blur as possible. I've never Match Moved a car driving by but I should probably give that a try. If I can do it, I can have Walter surf on top of it!

Motion capture has come a long way from the ping pong ball days. Digital sensors with GPS is what I'm going for. When it's set up, I should be able to drive the CGI character LIVE then save it and move onto the next performance...
Last edited: Jan 16, 2023
Upvote 0 Downvote

Here's a frame from the animation. I applied a film look to it during compositing... Not sure how I feel about it now though... The white creature seen in the frame is a 3D printed model I used to determine what the shadows for Walter should look like.. I decided to leave it in the shot. 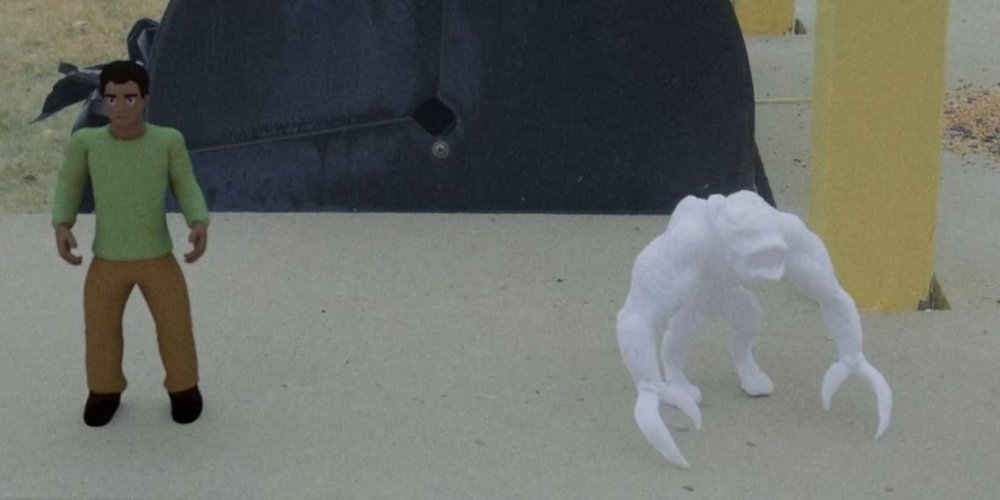 This picture shows Walter's skeleton and IK set up. Although I didn't use it in the animation, the feet have a complex set of IK joints that allow each foot to bend at the ball of the foot. The set up allows you to go against the hierarchy of the joint chain. 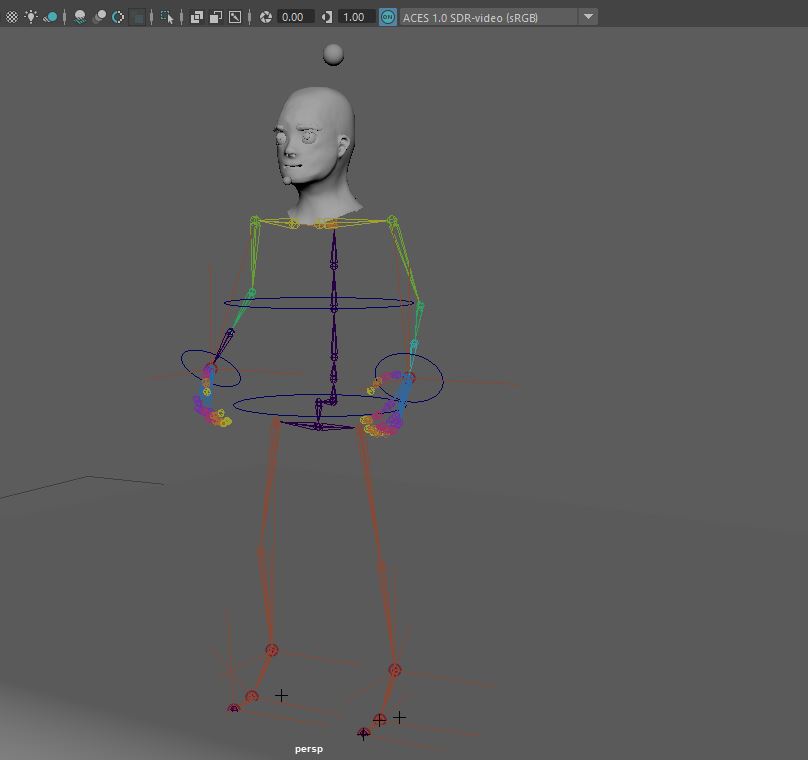 ​
Here's a shot of the camera, Walter standing on a 'shadow catcher', and an image plain that shows the background plate. Through the camera lens, Walter lines up properly with respect to the background. The shadow catcher receives shadows but the geometry itself does not render, only the shadows cast upon it.

..and finally, a portrait of Walter 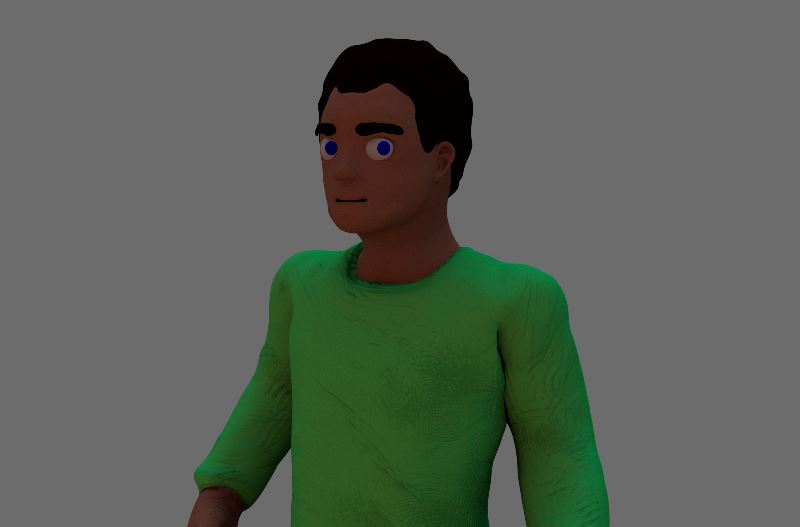 You don't know how important shadows are until they're gone! The shader does a pretty good job of giving a claymation look. I wonder if you could wire up a random proceedural deform on the model to mimic the small changes in the clay that happen when they move the models. You know, those minor finger dents in the clay that constantly shift a bit during real claymation. That detail, if you could nail it, would go a long way towards selling the claymation aspect.
Upvote 0 Downvote

Nate North said:
I wonder if you could wire up a random proceedural deform on the model to mimic the small changes in the clay that happen when they move the models. You know, those minor finger dents in the clay that constantly shift a bit during real claymation. That detail, if you could nail it, would go a long way towards selling the claymation aspect.
Click to expand...

That's a great idea! I could probably write a script that randomly replaces the bump map with others that show different deformations.. If you look at his chest close you'll see a finger print.

I didn't set up the lights for the portrait shot of Walter. I just used the IBL dome that I used in the animation. It doesn't do the details in the clay surface justice. Maybe next time I'll run an ambient occlusion pass to help bring out the texture more.. To be honest, I don't understand the coloring on Walter's shirt. The areas that should be shadows, like in the finger print, are a darker green. Not what I was expecting The only thing I can think is that it's from the dome light... I'll add it to my list of things to investigate... Do you know what the hardest part of this entire test was? The shadow beneath Walter. I rendered with V-ray which, for some reason, makes doing a simple shadow catcher non-intuitive. Mental Ray is as easy as checking a few boxes. Arnold has it's own shadow catcher shader. V-ray makes you add a special node to the shader that you then have to set up to be a shadow catcher. it's probably a good thing and I just haven't discovered the benefit of such a set up yet...
Upvote 0 Downvote 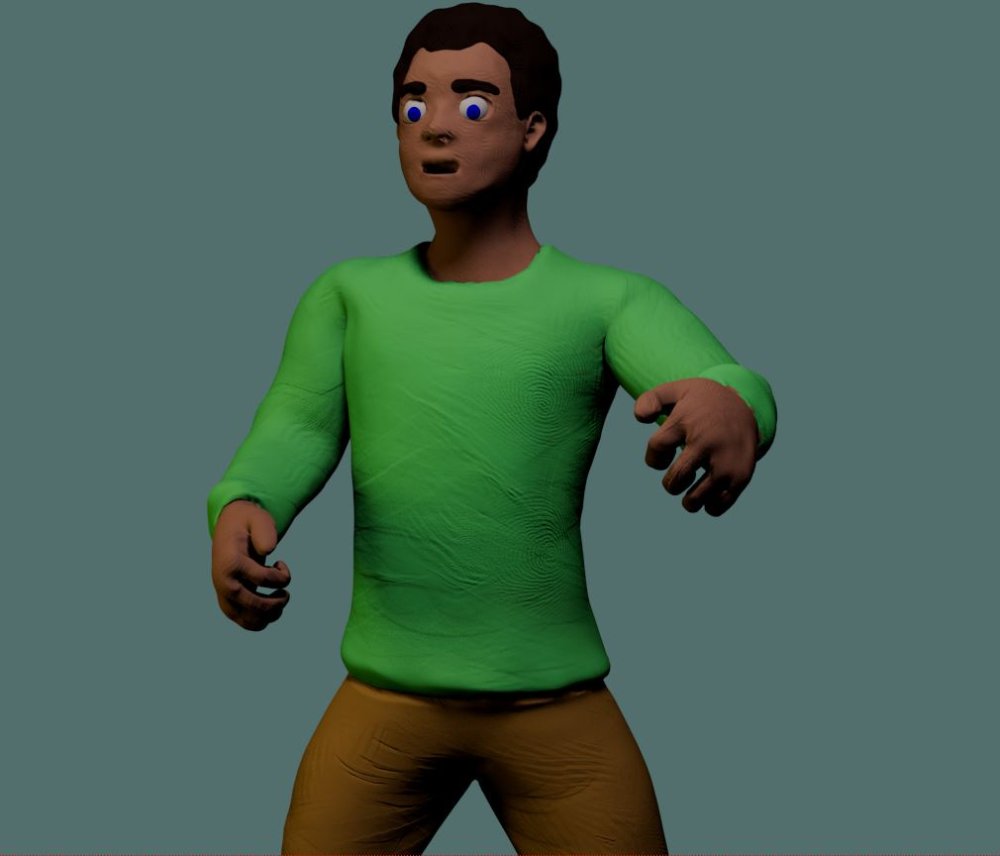 producing One of my methods to test quality of screenplay : Program it as visual-novel video game
2