news The Greatest Horror Movies of All Time

Products featured are independently selected by our editorial team and we may earn a commission from purchases made from our links.

Why does it feel like horror movies are always undervalued? One thing’s for certain: In this age of geekery reigning supreme, critics and academics no longer dismiss the genre as disreputable with the kneejerk regularity some once did. But even now there’s talk of “elevated horror,” of artier explorations of dread and terror — Ari Aster’s “Hereditary” and Luca Guadagnino’s “Suspiria” being two very recent examples — that are clearly distinguished from, well, non-elevated horror. The idea being that they engage your brain more than just showing brains being splattered against the wall.

How can films that fire your adrenal glands, send shivers down your spine, raise goosebumps, and quicken breath — that inspire such an intense physical reaction — also be cerebral experiences? We forget all the time that, as Anna Karina’s Pierrot Le Fou character Marianne Renoir says, “There can be ideas in feelings.”

What scares people says a lot about them — as the recent debate about what it means if a viewer finds certain elements of “Get Out” scary or funny revealed very clearly. “Get Out” showed the similarity between horror and comedy, the two genres most often expected to provoke an immediate, visceral reaction. Maybe the aversion some viewers have to both genres is a fear of losing control: of laughing so hard you snort or having to turn away in fright, of embarrassing yourself. A lot of people simply don’t want to lose control, no matter what. What’s funny is that horror, like comedy, is a genre in which each filmmaker has to assert his or her utmost control over the material, has to perfectly calibrate the storytelling, so that we can lose it. Extreme control so that the audience can lose control.

The IndieWire staff put together this list of the 135 Greatest Horror Movies of All-Time to celebrate these intensely primal, personal films. Our writers and editors suggested over 150 titles and then voted on a list of finalists to determine the ultimate ranking. We hope it’s a list that captures the wide range and diversity of the genre, from underseen Laird Cregar vehicles to a Russian chiller based on a Nikolai Gogol story, from J-Horror to the Mexican gem “Alucarda.” Brace yourself for these movies: losing control will never be so much fun. 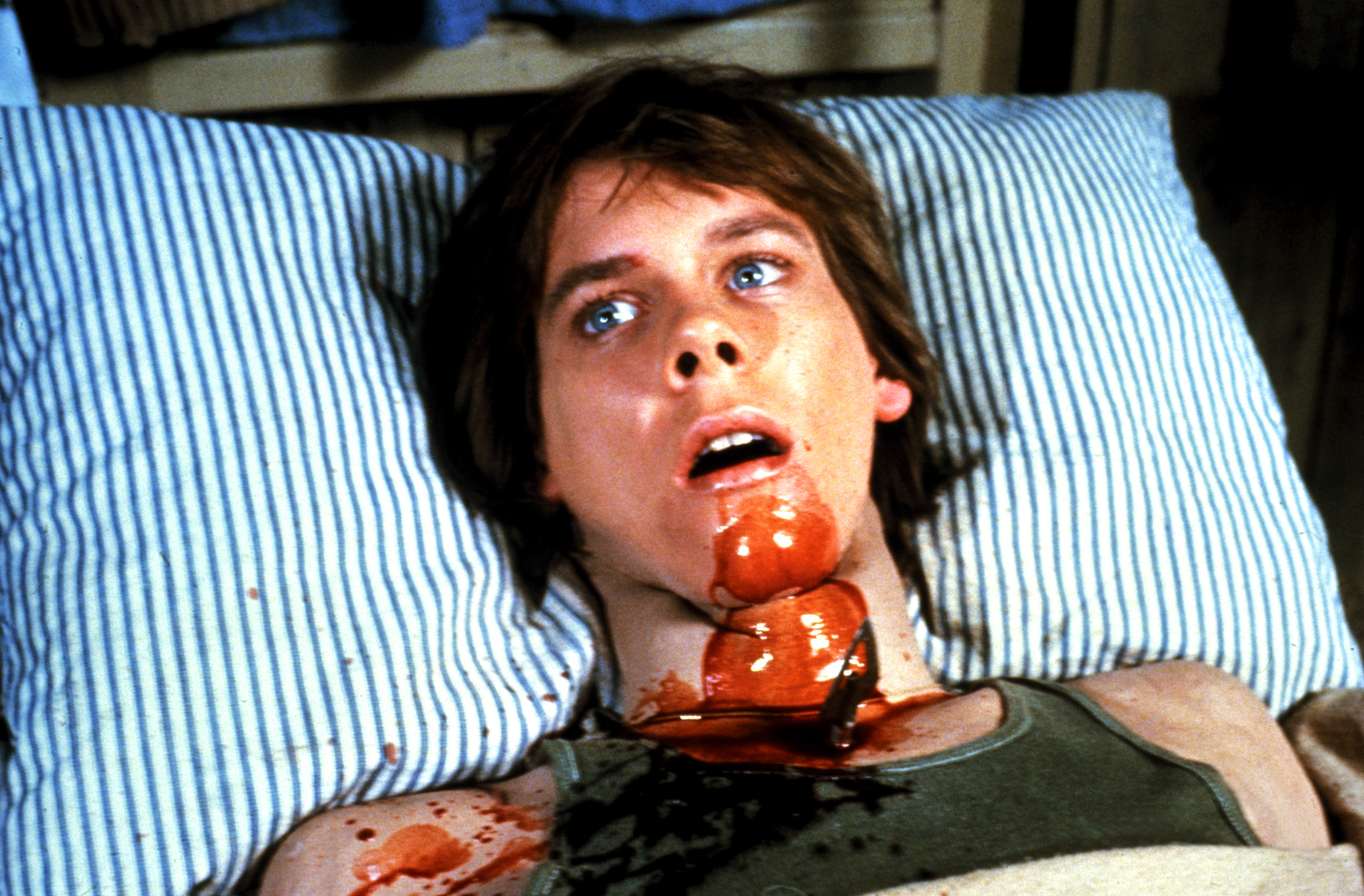 Anyone looking for the origin of how ill-fated Camp Crystal Lake camper Jason a) became a murdering machine and b) got that kicky hockey mask he so loves to sport while on his rampages will likely be at least somewhat disappointed by Sean S. Cunningham’s surprise smash hit “Friday the 13th.” Hell, Jason isn’t even the killer in what would become the first film in a sprawling, unwieldy, and often very confusing franchise (no, we’re not talking about that time Jason went to space, not now, not ever), but that shouldn’t prohibit any enjoyment of this (quite literally) campy, kooky indie hit.

And, yes, it was an indie hit! Understandably inspired by the success of John Carpenter’s “Halloween,” Cunningham and writer Victor Miller started shopping around their script — which leaned heavily into similar ideas, from the unseen stalker and the horny teens in peril, to gory kills and a seemingly “safe” atmosphere in which they are carried out — before it was even complete. A bidding war ensued, and ultimately the film was picked up by Paramount Pictures, who carried it to an almost $60 million box office run. Filmed on location at an old Boy Scouts camp and with a cast of young rising stars (including Kevin Bacon, Adrienne King, and even Bing Crosby’s son, Harry Crosby), this first entry into the series is a wacky, gory delight all on its own, independent of the scads of follow-up features.

You surely know the shape of it already: a bunch of horny camp counselors attempt to clean up a previously disused summer camp (something bad happened there so many years ago, but who can even remember what), and when they’re not busy getting down, they’re being killed off by a particular brutal unseen killer. There are things that go bump in the night and scary thunderstorms and axes and arrows, oh my! Mostly, though, there are stupid teenagers running facefirst into danger and not ever having the good sense to get away from it — believable! — and a truly unexpected villian with a very special axe to grind. While it’s scary and gory and amusing enough on its own, “Friday the 13th” does nattily set up more chills to come, and while it would take nearly two more films for Jason to get his mask, from the start, we at least know why he kills, and who could ask for more? —KE 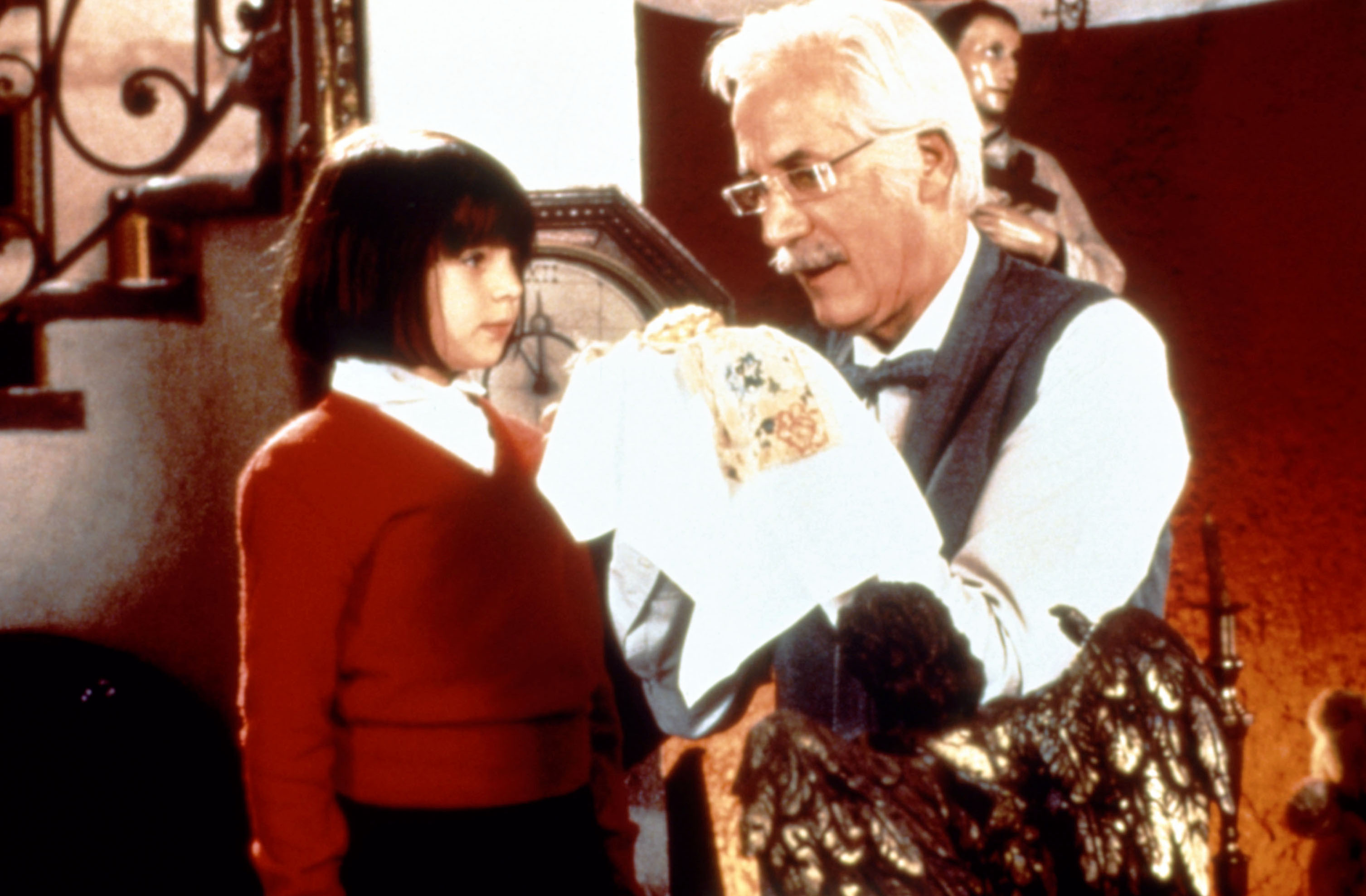 Before the fantastical vision of “Pan’s Labyrinth” jettisoned him to international prominence and his emotional monster story “The Shape of Water” won Best Picture, Guillermo del Toro established some of the key ingredients for his brand of magical realism in his 1993 debut feature “Cronos.”

The film’s mythology begins in the 16th Century, when an alchemist develops a device that provides him with eternal life. It’s discovered in the 1990s by an antiques dealer (Federico Luppi), whose name bears an unsubtle similarity to one Christian savior. Jesús Gris is soon afflicted with a resurrection of his own during a battle for the device waged by a dying businessman (Claudio Brook) and his nephew-henchman (Ron Perlman).

While the canvas of “Cronos” is more compact than those afforded to del Toro later in his career, a smaller budget couldn’t constrain the filmmaker’s voice. In a movie that skillfully balances gore and heart along with fantasy and reality, del Toro’s first monster is a man, one caught between a supernatural thirst for blood and the humanity he retains through his love for his granddaughter.—CL 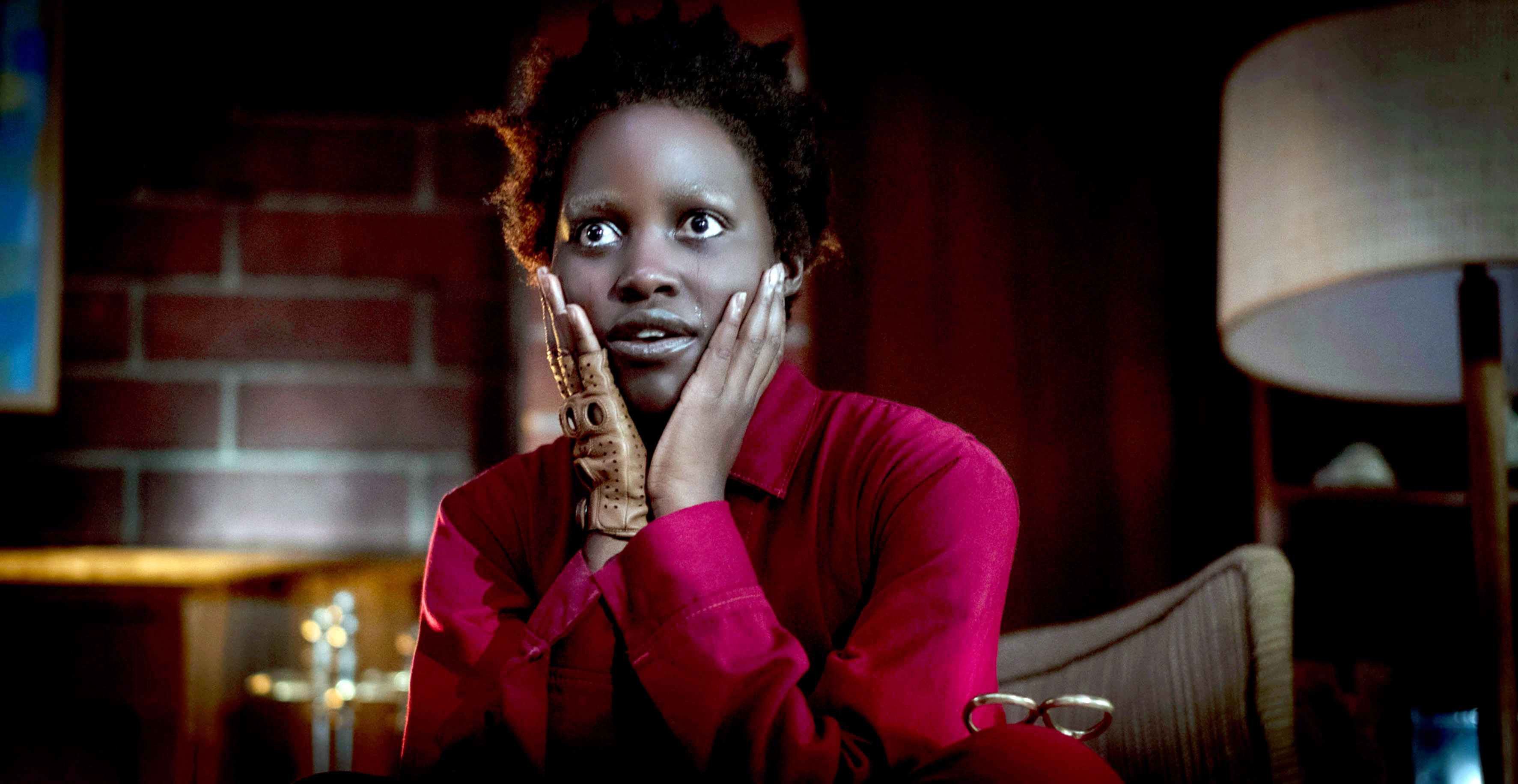 For his 2019 followup to the zeitgeist lightning-rod “Get Out,” Jordan Peele builds a fascinating mythology in “Us.” What starts as an eerie drama about a family (led by Lupita Nyong’o and Winston Duke) on a bad vacation quickly unravels into a doppelgänger nightmare. Are we really the people we think we are, or are the darkest versions of ourselves living in the ground below?

Nyong’o does an exceptional double bill as devoted mother Adelaide and her deranged, scratchy-voiced double who emerges from beneath the surface of civilization, along with many others, to wreak havoc on the privileged, oblivious living. Elisabeth Moss is predictably marvelous as the wine-guzzling Kitty, who is most certainly that woman we all know on a beachside vacation, but the actress quickly subverts that performance to play her monstrous, murderous double. As Peele’s dark demimonde expands, not everything checks out, especially as the film swells to include the 1986 Hands Across America human chain against poverty, but his wild swing at the fences is impossible to look away from. —RL 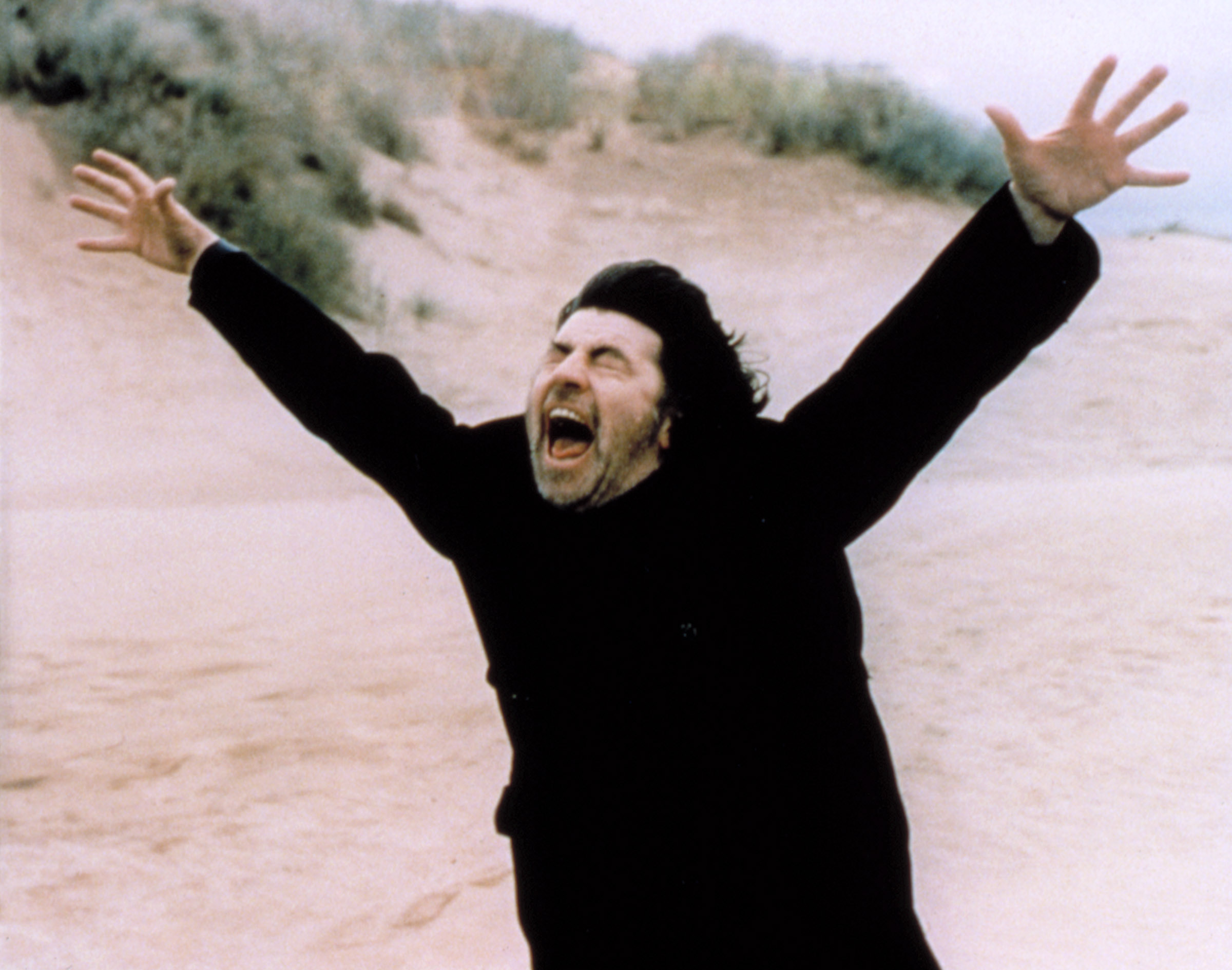 Jerzy Skolimowski’s “The Shout” is a uniquely unsettling plunge into a sound engineer’s descent into madness. Already, Anthony Fielding, played by John Hurt, is primed for madness. In his rickety studio in England’s North Devon coastline, he crafts sounds from unusual sources, striking a violin bow across scrap metal, rolling wet marbles across a sheet pan, or chain-smoking into his microphone to create eerie aural soundscapes. Then there’s the Francis Bacon paintings lining the walls.

The provincial life he shares with his wife Rachel (played by the always-excellent Susannah York) is seriously disturbed by the arrival of a mysterious vagrant (Alan Bates) who claims a Shaman has taught him to deliver a scream so deafening that it can kill a person. That shout —staged impeccably in a windy dune as Hurt pummels down a sandy hill to uncertainty and lambs topple to their death by sound — doesn’t kill Anthony. But the consequences are much direr, as a complete psychosexual breakdown of his marriage ensues. Skolimowski’s under-seen film is a masterclass in psychological horror. There are no jump scares, no monsters in the dark, but this adaptation of a short story by British writer Robert Graves is most disturbing for its unpeeling of a marriage already doomed. The sounds in the aftershock ring through your head. —RL 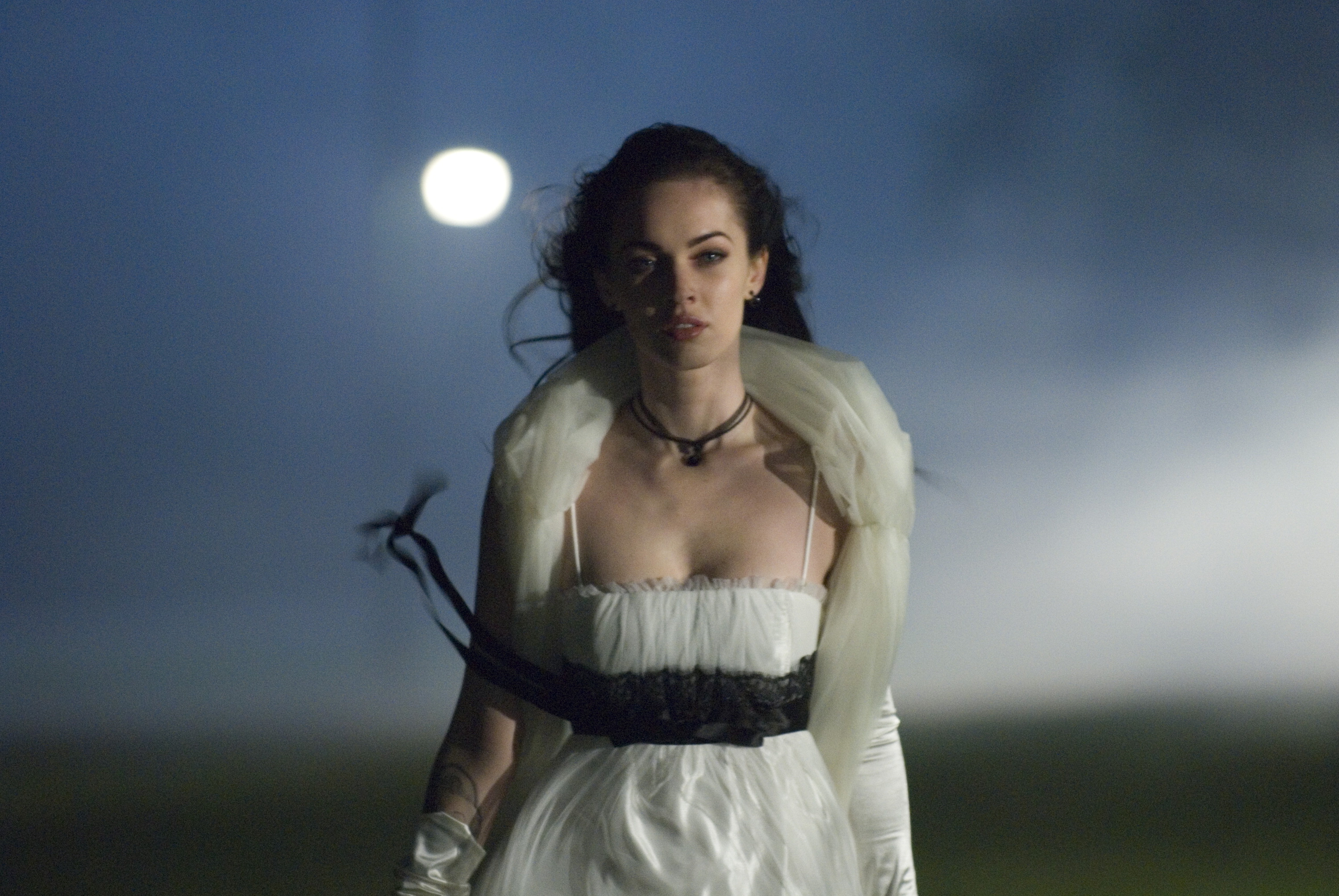 Cruelly overlooked at its release in 2009, it didn’t take long for Karyn Kusama’s subversive feminist possession flick to receive its rightful reevaluation. As too often happens to movies about women and girls, “Jennifer’s Body” was originally written off as fluff, despite a killer script from Diablo Cody, fresh off the success of “Juno.” The movie revolves around two best friends, one popular (Megan Fox) and one not (Amanda Seyfried), and plays with the blurred lines of the intense bond that can develop between teenage girls. Offered as a virgin sacrifice to serve the male ego’s needs, Megan Fox’s Jennifer becomes possessed due to, well, not actually being a virgin. With satirical aplomb, Cody transformed the iconography of possession into an allegory for the way women’s sexuality is demonized in the service of patriarchy. Add to that some explicitly Sapphic overtones and Kusama’s expert direction, and it’s no surprise that “Jennifer’s Body” became a cult hit. Now if we could only relaunch Megan Fox’s career, that would be the final but of justice served.—JD
Click to expand...

Staff Member
Moderator
I thought Jennifers body was a really terrible movie and i was surprised how bad the script was for the the writer. i turned it off.

sfoster said:
I thought Jennifers body was a really terrible movie and i was surprised how bad the script was for the the writer. i turned it off.
Click to expand...

Yes, it's an interesting list, but has a lot of weak movies are on it. It's lacking many of my favorites, such as DEAD ALIVE, CREEPSHOW, AN AMERICAN WEREWOLF IN LONDON, THE HOWLING, 30 DAYS OF NIGHT, THE HITCHER, JURASSIC PARK, THE WOLFMAN, KING KONG, FRIGHT NIGHT, DRAG ME TO HELL, VIDEODROME, PREDATOR, etc.

INSIDE is listed twice, at #129 and #119. I really liked it, but apparently they thought it was good enough to occupy two spots.

Some odd ones that I like are on the list, such as THE SKIN I LIVE IN and BROTHERHOOD OF THE WOLF.
E

Wow... The Shout is going back a bit. I remember seeing that when I was a kid.

Carpenter's The Thing would be my favorite movie of all time. And I really like Prince of Darkness as well.

It's funny, I don't really rate Jordan Peele at all. I thought Get Out was good. And I loved the first half of US. But the end of the movie was pretty poor, imo. He had a great opening premise but didn't know how to conclude it - So he hand waved the story away, sadly.
You must log in or register to reply here.