news Netflix’s ‘Blockbuster’ Is Set in 2022. Why Don’t the Characters Understand Social Media?

Say what you will about Netflix’s “Blockbuster,” but it’s certainly a bold choice.

Bolder still might be the creators’ decision to set the comedy series not in the eponymous home video company’s heyday, but in the present, where there is exactly one Blockbuster left in the world. Putting “Blockbuster” in 2022 provides sky-high stakes for the store’s survival as it competes with streaming, but it also means characters should be engaging with social media and technology, and the show either doesn’t acknowledge or can’t quite understand that. “Blockbuster” feels out of step with the times for multiple reasons, and it’s puzzling lack of understanding of social media doesn’t do the show any favors.

It’s not new for TV shows to fail at understanding modern society’s relationship to technology. The issue is most prevalent in teen shows, which are either packed to the gills with forced hip jargon and cursory Tiktok references or entirely absent of this element of day-to-day life. Texts and apps look different depending on if the show clears rights to depict them, or decides to show those on screen instead of on a phone itself. Characters use social media in ways that real people often don’t, or even talk about websites and apps in ways that feel forced and unnatural. The teens on Netflix’s own “Ginny and Georgia” seem to constantly be explaining apps and how they use them to the uninitiated audience, adding up to conversations that sound nothing like how those characters would actually talk.

“Blockbuster” never shows or engages with Tiktok, but insists on mentioning it often. Most characters in the show are old enough to probably not bother with the app, which makes it even more unnecessary to acknowledge (adding up to the suspicious conclusion that no one in the writers room has ever actually used the app). In Episode 1, Eliza (Melissa Fumero) names things that she’s grateful to the internet for, name-dropping YouTuber Logan Paul (insane) and then saying “Tiktok influencers” with no elaboration. She doesn’t have to be fluent in the app’s top content creators, but “Tiktok dances” is at least mildly specific and therefore believable. An episode later, she says that Kayla (Kamaia Fairburn) gets paid to put on makeup while lip-syncing to John Mulaney bits on Tiktok, which is extremely specific, and effective as a result. Unfortunately, the punchline then boils down to how Timmy (Randall Park) feels old, and the show misses out by not exploring how these things work and why they make people feel old — especially as it mirrors their experience working in a video store that grows increasingly obsolete by the day.

Eliza’s relationship to social media contains multitudes. She loves her nameless Tiktok influencers and problematic YouTubers, but in a later episode refers to “following” someone on Facebook, not adding or friending them, the more common Facebook terms (if anything here tracks, it is Eliza being on Facebook). She says she made a fake Facebook account to “follow” this person, which sounds exactly like how people use and talk about Instagram — but oddly enough Instagram is never name-dropped in “Blockbuster.” Nor are any dating apps, though Carlos (Tyler Alvarez) does refer to swiping and Timmy is supposed to be on one, but Kayla steals his phone and uses “reply all” on the matches, which no app to date has been messy enough to offer as a real option. Authenticity in media matters, and the clear lack of it when “Blockbuster” engages with social media weakens the show. 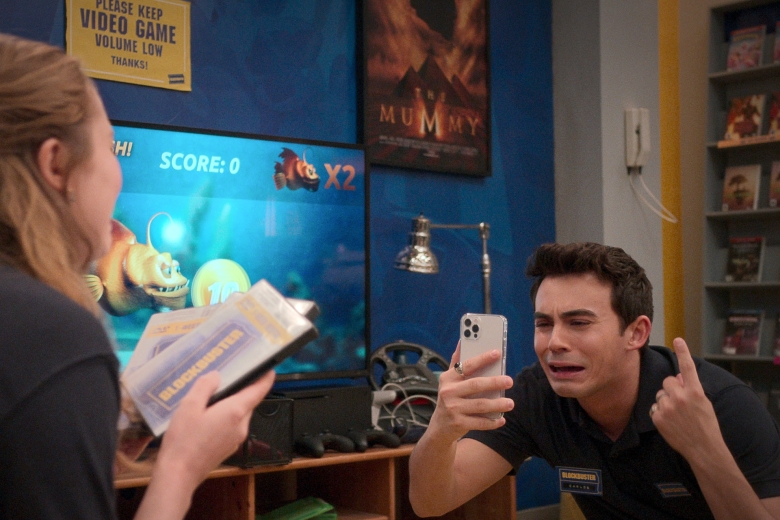 The comedy’s desperation to cling to the past is evidenced with surprising strength in Carlos, a 24-year-old accounting student and aspiring filmmaker. To hear him tell it, Carlos works at Blockbuster so that he can emulate the career trajectory of Quentin Tarantino, but beyond that he isn’t doing much to kickstart his dreams. He’s a walking movie encyclopedia who idolizes the film critic on the local news, but when it comes to Carlos having a natural eye for filmmaking, “Blockbuster” mostly feeds this exposition through other characters. Carlos’ major ~moment~ as a creative visionary is when he films Connie (Olga Merediz) trashing the store while hopped up on Five Hour Energy, a horizontally-filmed iMovie edit that might have been impressive in 2005 but that most smart phone users can knock out in minutes (vertically) in 2022.

“In the premiere episode, Carlos and Hannah (Madeleine Arthur) film some vertical video content that viewers never see — in fact, “Blockbuster” never visually acknowledges vertical video, which lines up with its inexplicably anti-internet stance but once again does not reflect the reality of its chosen setting (the scene also equates the importance of their “online marketing” on par with another employee selling snacks to stoners). When the store block party goes awry, Carlos is somehow the only person there who films it, and his video brings a local news team to the store for free publicity. “Are you like a famous director now?” a clueless Hannah asks. No, because Carlos didn’t even post the video; Kayla did. False attribution and intellectual property theft are among the nastier realities of social media, but “Blockbuster” doesn’t care to explore them.

Setting “Blockbuster” in 2022 and not letting its characters naturally engage with technology and social media renders whole swathes of the show inaccurate. If technology and the internet are so evil, why not take them out of the equation by setting the show in an earlier decade? “Blockbuster” evokes sentimentality for the past whether it wants to or not, because most viewers will associate the store itself with the ’90s and aughts. This could have been the nostalgia watch of the year, but instead presents a confusing portrayal of contemporary life that doesn’t belong here and now.

“Blockbuster” is now streaming on Netflix.
Click to expand...

Staff Member
Moderator
I watched the first episode and hated it.
My primary note was that it should have been a peroid piece.

People want to remember the good times - not see some shitty store flounder to stay afloat with an outdated business model.
Last edited: Nov 6, 2022
You must log in or register to reply here.

news ‘Wednesday’ Renewed for Season 2 on Netflix (Nope, Not Amazon)