NOTICE: THIS THREAD HAS BEEN UPDATED IN A NEW THREAD, THIS PITCH IS NO LONGER VALID

Hi! I am Asher Pike. A young Australian man who is participating in a race. The Human race. I am an artist, and this is HUMANITY: (Video Trailer / Pitch Link):

Every aspect of that word, the vast histories, stories, viewpoints, records and cultures recorded within Humanity will be presented in a rollout of content. This experience will be comprised of visual narratives (films) and an original album of songs. I will be taking inspiration from the world's visual and musical styles to convey the senses, emotions, events, records and the other vast experiences of the human condition from its many viewpoints through Art. This artistic journey will be filled with many ups and downs, many failures and successes, this is the main objective:
To use visually and musically artistic means to present to you, the viewer each kind of mindset, culture, life-pathway, belief and viewpoint that humans indulge in. It will be up to you to favour or discard whatever faces of Humanity are presented, as they will each be presented as their believers want them to be. Also, each view will then be presented from the opposing side, and from “middle grounds.” All this portrayed through the visual and musical art of the worlds cultures.

Here is the GoFundMe fundraiser: 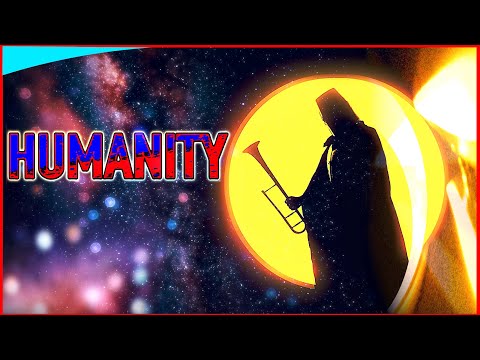 Here is a 2000 word pitch for those interested in reading into this further: 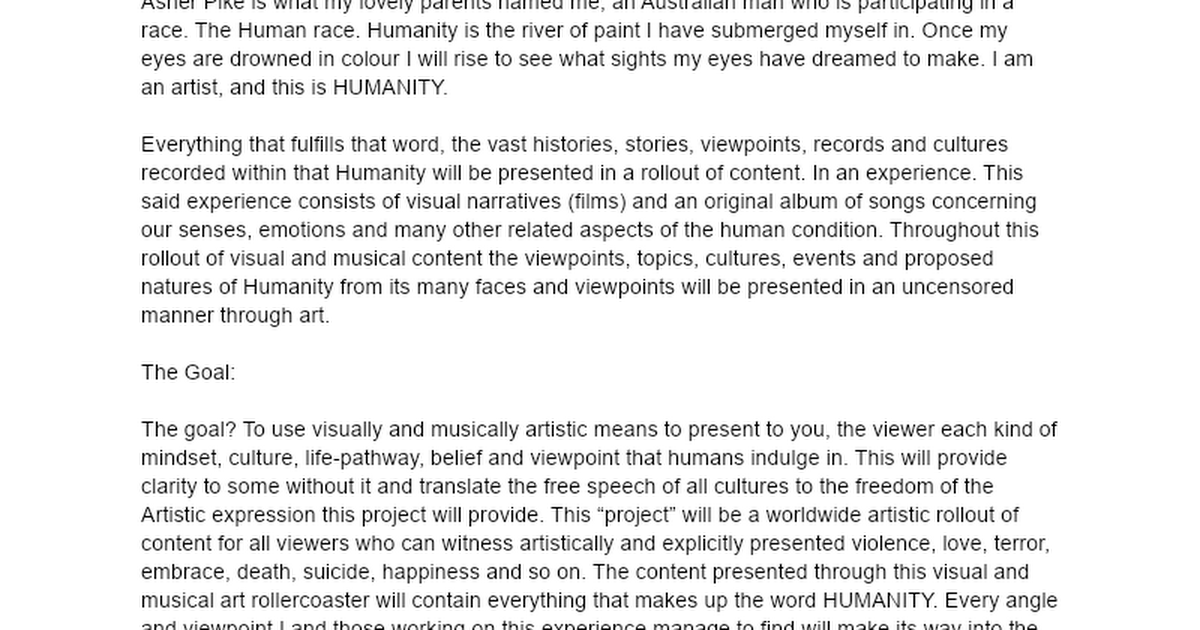 HUMANITY Full written pitch By Asher Pike 2000 words -Project summary Asher Pike is what my lovely parents named me, a young Australian man who is participating in a race. The Human race. Humanity is the river of paint I have submerged myself in. Once my eyes are drowned in colour I will ris...

I would absolutely love to know all your opinions, your criticisms, feedback, all of it. This is a very ambitious project and also a simple one due to the nature of the word Humanity.
Everything you need to know about this project is surmised in that word, in HUMANITY.

Staff Member
Admin
20K for touring, performances, comics, and events for a film that does not exist yet.

indietalk said:
20K for touring, performances, comics, and events for a film that does not exist yet.

Lol my friend your right it’s a stretch and that’s why I’m no longer pitching those extra things like tour, comics etc to anyone or in the fundraiser. I doubt the fundraiser will raise anything either to be honest. The chances of success at all as always are 0.000009 percent.
Last edited: Aug 19, 2022

Staff Member
Admin
Don't be Fyre Fest! Don't say there's comics and tours and music videos and events when you don't even have a film. You will quickly lose credibility in the community from anyone that gives a dollar. Be honest and spell out exactly what the money is for. Do you need help with buying props? Paying crew? Don't ruin your reputation.
Want a signature for fun or advertising?
indiePRO members can put text and a link here!
indieBIZ members can put text, a link, and an image!

indietalk said:
Don't be Fyre Fest! Don't say there's comics and tours and music videos and events when you don't even have a film. You will quickly lose credibility in the community from anyone that gives a dollar. Be honest and spell out exactly what the money is for. Do you need help with buying props? Paying crew? Don't ruin your reputation.
Click to expand...

Well to be honest I still will be making many music videos, comics, books and short side films that accompany the main big daddy Humanity film and album. But those productions just won’t be funded at all by the now simplified fundraiser. Those projects are now just gonna be complete side projects. Cause as feedback and criticism has shown simplicity is needed for the humanity premise, one film and one is album is a much better project to fund than a whole ass 7 film rollout with ten million other contents. So now while the main film n album will be pitched, the rest will remain as side projects that won’t be funded. And also I woudnt say I don’t have a film, this has been in planning personally for many years now and many of the visuals I have made before are like storyboards. So yes your right I haven’t done much but it sure is into the gritty stage of pre-production. With many concept films having been made. The best being 2 full proof of concept feature films. But I do see what you mean there’s still not much to go off of, as always chance of success here is minimal. That’s the game in filmmaking hey.
You must log in or register to reply here.

call-for-entries The ATF Formats Pitch 2022: Could your gameshow be the next big hit?