Hi all! Been a while since I was posting regularly here, so apologies for the drive-by promotion (though I can assure you all that I do still frequently check-in and read through the boards).

For those who don't know – which I imagine is almost all of you, how times have changed... – I've taken a step away from filmmaking in recent years to focus on my career, which is/was journalism, but has now segued into podcasting. I've been producing podcasts professionally for the last few years and started my own company to do so in April (prior to that I ran the podcasting operation of a magazine). I primarily do current affairs, economics, politics, management podcasts, that sort of thing, but I've allowed myself a small indulgence in order to start Establishing Shots, which is a podcast about filmmaking, aimed at indie filmmakers. It's going to feature lots of interviews with people from different parts of the industry, but with the focus aimed at getting practical tips and advice for indie filmmakers.

I've just released the first episode, which was with Chloe Trayner who's the associate director of Open City Documentary Festival. For those who don't know, Open City is probably the UK's second biggest documentary film festival after Sheffield Doc/Fest. Unfortunately, it was quite a short interview and was recorded in a very tricky environment at the back of the festival hall, but there's some interesting stuff in there, particularly about the submissions process and how their curate their content. Would be very grateful for anyone giving it a listen.

And do subscribe on iTunes if this is of interest. I'm hoping to attract a partner sponsor in the next few weeks, so feel free to DM me if you have any tips!

How do you get the Russo Brothers to exec produce your £25k indie film?

On the latest episode of the Establishing Shots podcast, I spoke to Jay Alvarez, writer/director of Dizzy Pursuit, about how he got the Avengers directors involved in his film (along with Robert Downey Jr) and all the nuts and bolts of making an indie film on a shoestring budget, and the pitfalls that we all face trying to get our work out there. I hope it's of interest to some of you. If not, I shall weep.

You can listen to the episode here.

And if you enjoyed that, please do consider subscribing on iTunes. This whole project is a labour of love – I make my living producing podcasts, but, thus far, not a cent from this and really it's just there to be a resource for indie filmmakers. I try and ask the questions that I want more journalists to ask, and we've got some great episodes coming up from that perspective.

Staff Member
Moderator
Terrific interview and a great "get," at least from my American perspective

mlesemann said:
Terrific interview and a great "get," at least from my American perspective

Thanks Mara! Yeah, was delighted to get to speak to him (and get a decent block of time) given that I guess Won't You Be My Neighbor? is probably the current favourite in this year's Best Doc Oscar race, and a crazy box office success to boot. I'm trying to get a mix of indie filmmakers and more high profile guests (I recorded an episode with the cast of the new Coen Bros movie, including Tim Blake Nelson and Zoe Kazan, last week) and go from there. Hopefully it will find its audience in weeks to come...

I checked out your podcast. Great content! You have one more subscriber now

Runlevel Two said:
I checked out your podcast. Great content! You have one more subscriber now

I've just published this week's episode, which is a conversation with the cast of the new Coen Brothers movie, The Ballad of Buster Scruggs. I speak to Tim Blake Nelson and Harry Melling, and then Zoe Kazan and Bill Heck. Both the conversations are a bit mini but I loved asking Zoe, particularly, about the differences/similarities between the Coen Brothers and Nancy Meyers (and she gives a great answer)!

You can listen here, and also subscribe on iTunes or Spotify if you enjoy!

There's also video of the interviews, so will see about uploading that to YouTube and posting here, if I'm not too embarrassed...

Staff Member
Moderator
Absolutely great stuff and nothing to be mortified about.

I'm a real Zoe Kazan fan, and I love the look on her face when you asked about Nancy Meyers. The transition to a serious answer when she realized you weren't joking is great - and I'm a big Meyers fan too.
www.maralesemann.com

This week's episode is with a British filmmaker called Victoria Mapplebeck, who works in documentaries, and has just produced two acclaimed short documentaries about her son, shot on iPhones, and is currently making a VR documentary about her own treatment for breast cancer.

You can listen here and do subscribe here if you enjoy.

If it makes it easier, I've also put it on YouTube (though please do still subscribe through a pod streaming service if you enjoy!):

And if you're interested to watch Victoria's latest film, here it is:

(I've unsuccessfully tried to post this three times now, so apologies if the message is brief!).

My latest podcast, and possibly, though not definitely, the last before Christmas is an interview with Yann Demange, director of 2014's '71 and White Boy Rick, starring Matthew McConaughey. He was also talked up as a future Bond director and reportedly interviewed when Danny Boyle dropped out (though WBR has been a bit of a bomb and probably not helped his star).

Have to say that I found him a bit prickly and defensive, and clearly not interested in doing press for a film that's getting a very limited release here in the UK (I think it was a bit wider for you folk in the US). Anyhow, some interesting thoughts all the same. Listen here: https://audioboom.com/posts/7108401-how-to-go-from-britain-to-hollywood-with-yann-demange

(And, as ever, if you enjoyed please do subscribe on iTunes and leave a (hopefully positive!) review).

I took a couple of months off this project because I had to focus on work that was getting me paid, and the last interview I had done before Christmas, with director Yann Demange, wasn't very good and made me reappraise why I was doing this...

Anyhow, I'm going to start releasing episodes again, starting with this week where I talk to writer/director and Academy Award winning VFX developer (who's also a friend of mine) Ben Kent about his new horror-comedy, F.U.B.A.R. Grateful for any listeners:
https://audioboom.com/posts/7186302-how-to-go-from-vfx-whizz-to-writer-director-with-ben-kent

And you can subscribe here if you're that way inclined! If anyone is feeling particularly generous and wants to leave a rating and review on iTunes, that would also be really helpful to me in terms of growing the audience for the show.

I'm struggling on with this project, despite the lack of a big audience. Any listens from you guys (plus ratings and reviews on iTunes if you're an absolute doll) would be much appreciated!

This week I'm talking about Arabic cinema, something I know nothing about, with Sheyma Buali, who is director of the BBC Arabic Festival here in London. If you know nothing about the Middle Eastern and North African cinema scene then this is a pretty interesting introduction!

Using the YouTube version for embedding purposes but do subscribe on iTunes if you have it or you can use Spotify if you prefer!

Hey everyone, just checking in with a new episode of my filmmaking podcast. This one's with Mark Jenkin the writer/director of a film called Bait. Bait's been a real hit here in the UK – it's a little Cornish film shot on a Bolex and with dubbed sound, so very unusual, but it's been acclaimed here in the UK, has been in most mainstream cinemas and won a BAFTA. It's really worth seeing.

Anyhow, you can listen to the podcast here.

Hi Nick. I'm a little embarrassed to say I just subscribed - a year and a half year after you first mentioned it.

I enjoyed this episode. I want to see "Bait" and I'll listen to past episodes. No excuses these days of the economic shutdown...

directorik said:
Hi Nick. I'm a little embarrassed to say I just subscribed - a year and a half year after you first mentioned it.
Click to expand...

Haha, absolutely nothing to be embarrassed about – and thank you for listening! To be honest, this is the first episode in a year (let's call it the start of season two). Have struggled a little bit for motivation whilst work has been busy, but hopefully will get some good interviews done in the next few weeks. And definitely watch Bait – it's a beautiful film and I think it's success is a real testament to the way that audiences can and do still connect with interesting filmmaking.

Back in the day I shot a lot of 16mm B&W with a spring-wound Bolex and loved processing the film myself so I related to Jenkin. 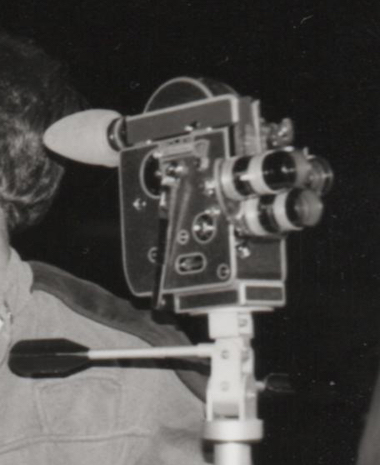