Thinking about getting a higher quality shotgun mic. I like to record my audio separate from the video so that I can mix it in post, and I would also like a better means of doing so (currently using a laptop with a recording interface). Does anyone have any suggestions from mid to high price range?


If you decide on one of the mid-priced audio recorders and do not want to get a mixer I would suggest you get one of the modded units from Oade Brothers. They are not much more expensive than the stock units and have much better pre-amps.

Thank you for the post. If I mix them on the set, can I still remix them in post? As in, two channels being recorded onto two separate tracks?
S

I've looked at it, but I'm looking for something a little higher end.

I'm running an AT835R and am quite happy with the sound quality from it. For a short capsule shotgun, it's got incredible off-axis rejection. Affordable, but requires phantom power.

Compared to the camera mic, of course. Each incremental improvement will seem "incredible" until you get used to it.


Scorer said:
Thank you for the post. If I mix them on the set, can I still remix them in post? As in, two channels being recorded onto two separate tracks?
Click to expand...

So far, at least, you are only recording one (1) sound source, so what multiple sources are you mixing in post? If you are a one-man-band sound crew you would set one channel lower than the other as a safety against sudden transients; after all, you can't mix and boom at the same time, which is not an issue for a real sound team.

I have another question for you. Why do you want to invest so much in prosumer/professional sound gear? Are you planning on becoming a professional production sound mixer or opening a commercial production company? Otherwise, IMHO, you are wasting your money. Who is going to swing the boom and run the mixer/recorder for you? Booming and running professional equipment requires knowledge and a high degree of skill. Just because you own it doesn't mean that your sound will reflect your audio investment; it may, in fact, sound worse than the more forgiving prosumer/consumer products. If you go the prosumer route - $1k to $2k - you may save some money if you do a lot of shooting; otherwise you should very seriously consider hiring a professional to do your sound. A professional production sound mixer, even an ambitious up-and-comer, will have knowledge, skills and experience far superior to your own. The ambitious up-and-comer will have a decent sound kit, and an long-time pro will have gear you can't even begin to afford.

BTW, just the accessories for the high end gear will set you back another $2k.

If you are not going to be using it every day (or at least on a very regular basis) it is probably not a wise investment.


This guy easily has about $10k slung around his neck.

This sound cart, if you include the stuff you can't see, probably goes for well over $50k. 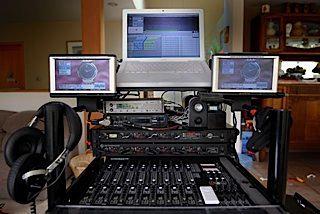 I see. So to get good sound quality (better than an azden sgm-1x) and something more simple to record with (other than toting a laptop and usb recording interface around) while keeping it disconnected from the camera itself, what would you recommend that isn't blowing my wad?


If you want a micro-budget kit:


If you want to go ultra-mini-micro budget:

Much appreciated, thank you.
S

One more question if you don't mind answering, in what context would I be using the pencil mic?

Using a shotgun mic indoors, especially in an unprepped room, takes a great deal of skill; otherwise you end up with the classic "hollow, roomy, ambient" indie dialog sound. This is caused by two different problems with sound physics. The first is that shotgun mics pick up almost exclusively the longest sound reflections in the room; the second is "combing" created by the way the interference tube of a shotgun mic works. Getting the mic in close and precisely aimed is difficult for inexperienced boom-ops to accomplish. Since inexperienced boom-ops lack a high degree of skills a hypercardioid mic will somewhat mitigate the exaggerated reflections and mostly eliminate the combing effect.

I just bought a Riggy Micro, anyone have any experience or an opinion about using one of these?

Getting the Tascam DR-100mkII, should have it in a couple weeks, I'll try it out with my azden, and if I like it I'll get the other two mics as well.

I am using Rode NTG-3 on Zoom H4n recorder. NTG-3 worth 699 australian dollars and i like it so much. but i read a lot of reviews and watch a lot of youtube videos in comparing with other products and i finally come to a decision on buying RODE NTG-3. It rocks!!!


If you decide on one of the mid-priced audio recorders and do not want to get a mixer I would suggest you get one of the modded units from Oade Brothers. They are not much more expensive than the stock units and have much better pre-amps.

Question about the Promix 3 mixer... What are the pres like? The DR100 is a bit hissy but with a good mixer, it becomes a great little tool. How much extra punch will the pres have on the promix?

The ProMix 3 is a nice low-budget mixer. Does it compare to a Sound Devices mixer? No, but the ProMix 3 definitely has better mic pres than the DR-100. Just keep in mind that not all of the hiss is coming from the DR-100; low budget mics do have some self-noise, although it is minimal.
G

Alcove Audio said:
The ProMix 3 is a nice low-budget mixer. Does it compare to a Sound Devices mixer? No, but the ProMix 3 definitely has better mic pres than the DR-100. Just keep in mind that not all of the hiss is coming from the DR-100; low budget mics do have some self-noise, although it is minimal.
Click to expand...

When I paired the DR100 with a mixer... now I understand why everyone thinks it is 'hissy.'

The 'low' gain setting takes out all the hiss once decent pres are installed. And as for sound design...

Don't get me started!
S

Ok. So I got the Tascam DR-100mkII. I am concerned about hiss though. I just edited a shot with my azden sgm-1x and I got A LOT of hiss. I am not sure why. It recorded very quietly, and as a result I had to up the gain/volume to bring it to a decent level, thus making the hiss horrible.

Can either of you audio techies recommend something? I am looking to get the best sound quality possible out of the dr100, I would prefer not to spend $1000 bucks if I don't have to, but that is my limit.
You must log in or register to reply here.
Share:
Facebook Twitter Reddit Pinterest Tumblr WhatsApp Email Link
Top