If you asked who my favorite “Yellowstone” character is, I’d say Monica Dutton (Kelsey Asbille). The response might be surprising, considering she lacks the star power of Kevin Costner, the raw intensity of Kelly Reilly’s Beth, or the more expansive stories given to Rip (Cole Hauser) and Kayce (Luke Grimes). But in a world where these characters get away with actual murder in nearly every episode and constantly undermine each other, Monica has a conscience. She’s a good person who looks at the family she’s married into and figuratively says, “WTF was I thinking?”

And yet Monica feels like the Job of the Yellowstone, a character routinely traumatized, threatened, and injured for what the series presumes is impact and significance but feels like cheap television theatrics. And in the two-episode Season 5 premiere, a pregnant Monica lost her child after a car accident involving a buffalo and a man trying to eat pretzels.

Monica has always been a lightning rod for trauma. In Season 1, after declaring she didn’t want to live at the Yellowstone ranch, she was accidentally assaulted and suffered a traumatic head injury; Season 2 saw her the victim of racial profiling that ended in her having to strip nude; in Season 3 she offered herself up as bait to catch a murderer; and in Season 4 she was nearly killed in her own home during an assassination attempt on the Duttons.

That’s a lot of bad things for one character! While Beth has also been threatened with sexual violence, beaten, and nearly blown up, she has a greater sense of agency in the things that happen to her. As Rip tells her in Season 5’s premiere, she actively seeks a fight, and if bad stuff goes down, Beth Dutton is ready to meet it with a punch to the face. But as she routinely tells everyone, Monica just wants a normal life. She doesn’t seek out a fight, danger, or much of anything and yet it routinely follows her like a stray dog.

In this case, even when Monica is presumed to have agency, it is only used to showcase pain and trauma for entertainment purposes. Take the Season 3 storyline where she volunteers to catch a serial killer on the reservation. On the surface, this is Monica asserting her own agency to actively stop a killer. But we still have to watch Monica in a scared position of vulnerability, mimicking what numerous Indigenous women feel every day, and watch her be nearly sexually assaulted before being saved by a man. And, as Johnson explains, in the end, this narrative serves “little to no point to the overall plot” of “Yellowstone.” The killer only happens in that one specific episode and the task force Monica joins is seemingly disbanded immediately after.

Tolstoy once said that every unhappy family is unhappy in their own way, but what “Yellowstone” does with Monica is give her happiness, watch her eyes light up, and then kill it in front of her. Take her pregnancy announcement that ended Season 4. It was an opportunity for not just her and Kayce to come together as a couple but for Monica to blossom as a person, especially after the Dutton raid and deciding to extricate her family from the Yellowstone. 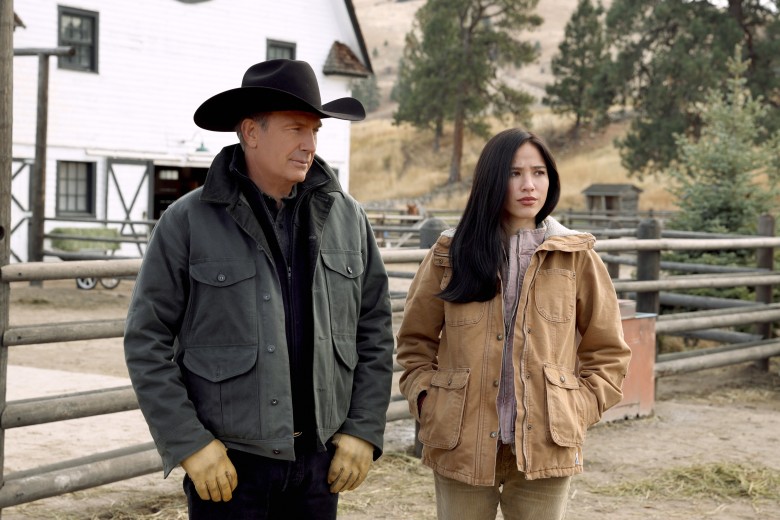 We didn’t get to relax much beyond that, considering the Season 5 premiere jumped ahead to the end of Monica’s pregnancy. So we, as an audience, didn’t get to see any moments of joy leading up to her delivery. But, boy, we got to watch Monica struggle to give birth, bloody in a ditch.

What makes this even more frustrating is the frequency with which series creator Taylor Sheridan plays up how much the show celebrates and loves Indigenous women. In a recent interview with The Atlantic about whether “Yellowstone” is a red-state series, Sheridan made a point of mentioning Indigenous women. “I just sit back laughing. I’m like, ‘Really?’ The show’s talking about the displacement of Native Americans and the way Native American women were treated and about corporate greed and the gentrification of the West, and land-grabbing. That’s a red-state show?”

These are similar talking points as when Sheridan promoted his 2017 feature film “Wind River,” which focused on two white characters attempting to solve the rape and murder of an Indigenous woman played by Asbille. In the case of that film, Sheridan attempted to shape intense and systemic mistreatment of women on reservations while packaging and selling it as a standard murder mystery with two non-Indigenous leads. Criticisms of the feature in 2017 noted how Jeremy Renner’s character was a white man who fancied himself part of the reservation community. Sheridan himself even touted sending the royalties from the film to a Native American women’s group in 2017, though by 2019, it was unclear if that ever happened.

In this case, seeing Monica’s trauma isn’t meant to show the character’s strength and resiliency, nor is it to wholly show how horrifically treated Indigenous peoples are by white people. It’s to exploitatively provoke a response. Seeing Monica suffer is to have the audience say, “Yes, this is horrible. But I can’t stop watching.” She’s no different than ads for foreign orphans begging you to save them for less than the price of a cup of coffee. On top of that, every time Monica escapes, something terrible happens.

Correlation shouldn’t equal causation, but in Monica’s case, it often does. Monica doubles down on maintaining a sense of morality and right and wrong, but this usually results in pain and nearly death. Even after leaving the reservation and then the Yellowstone, she suffers trauma that perpetually labels her an outsider. She’s doomed to have an unhappy ending.

Can this be fixed? Sure, although it would require Sheridan to allow others to cultivate a story of their own. Sheridan writes the majority of the episodes, and it’s unknown how many, if any, Indigenous writers are involved. Considering how little Monica and Gil Birmingham’s Thomas Rainwater, mayor of the Broken Rock Reservation, factored into Season 4, there might not be a desire to give them much. But something needs to happen because I shouldn’t be using #MonicaMustLive every season.

“Yellowstone” airs Sundays on the Paramount Network.
Click to expand...