After sitting out the third standalone Thor feature, “Thor: Ragnarok,” original star Natalie Portman returns for “Love and Thunder,” care of a meaty role as Dr. Jane Foster that’s already drawn strong praise from fans and critics alike. And, as has long been teased by director Taika Waititi, Portman is very much along for the entire ride this time around, as the film sees her character going through a massive transformation into someone, well, massive: her very own Thor.

While Portman was never truly resistant to returning to the Marvel Cinematic Universe after her turn in “Thor: The Dark World,” it did take a juicy pitch and an enthusiastic filmmaker to get her back in action. Once she was hooked, Portman said she quickly took to Waititi’s style of filmmaking, complete with lots of takes, lots of ideas, and even lots of cuts.

“It was really Taika who came to me, which was so incredible because he’s a director and creative human I so admire,” Portman said in a recent interview with IndieWire. “He came with the comic books where Jane becomes the Mighty Thor and was like, ‘What do you think about this?’ So it was this kind of a twofold opportunity, one to work with him and the other to get to have Jane evolve into this superhero, which was really exciting.”

“Thor: Love and Thunder” partially draws upon a comic storyline first put into place during the 2014 run of the “event storyline” titled “Original Sin,” which sees a) Thor no longer able to wield Mjolnir and b) the hammer subsequently being picked up by an obscured woman, who ends up being Jane. But while the good doctor’s powers grow when she’s wielding the hammer as the Mighty Thor, a long-term illness that has plagued her (also not really a spoiler, given its roots in the comics: it’s cancer) only grows worse when she returns to her human form.

Even with that important framework in place, Portman said that Waititi and the cast and crew were free to change other things as they saw fit. The actress said that Waititi’s “ability to flow with ideas” delighted her, along with “his demand for spontaneity.” She added, “His requirement that every take be different and new and fresh is something I hope I get to bring into every project I work on.” 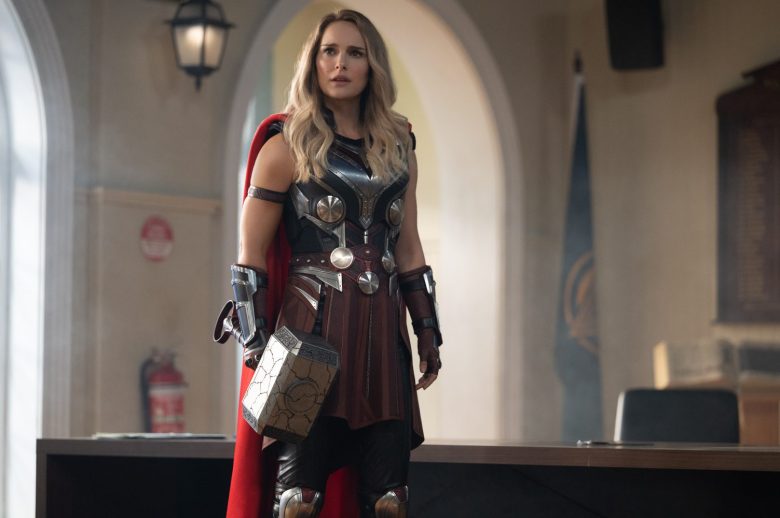 “Taika was pretty gutsy about just letting us seriously change the plot because of certain choices we made in the scene and certain places we decided to go,” the actress said. “Some of it was right and some of it was not right. Some of it ended up in the film, some of it did not, but it was pretty incredible to get to play and to get to have that latitude in the emotional stuff, as well as the comedic stuff.”

That demand for spontaneity and a bent toward filming multiple takes of different scenes meant lots of good stuff was left on the cutting room floor.

“There were whole sequences, planets, characters, and worlds that didn’t end up in the movie that were hilarious and amazing and [that] we spent a lot of time and energy on, and certainly the entire crew also designing and conceiving,” Portman said. “It’s just amazing how much great material is not in the film, considering how much great material is in it. Usually, it’s like, you’re just trying to get enough good stuff to put in the film, and this had overflow. So that was really surprising.”

Some of those snips include the more emotional scenes between Thor and Jane. “I don’t want to spoil anything, but there are some very emotional scenes,” Portman said. “The interesting thing was how we had room to workshop them. We filmed 20 different versions of [one key scene]. There’s a few pivotal emotional scenes, but we did really, really different things, many different times.”

Also filmed but not included in the final film? More scenes between Jane and Valkyrie (Tessa Thompson), the king of New Asgard, who welcomes Jane to the village after she appears, picks up Mjolnir, and turns into the Mighty Thor. Portman and Thompson are already good friends in real life, which added both ease to the film’s production and the obvious chemistry between their characters. 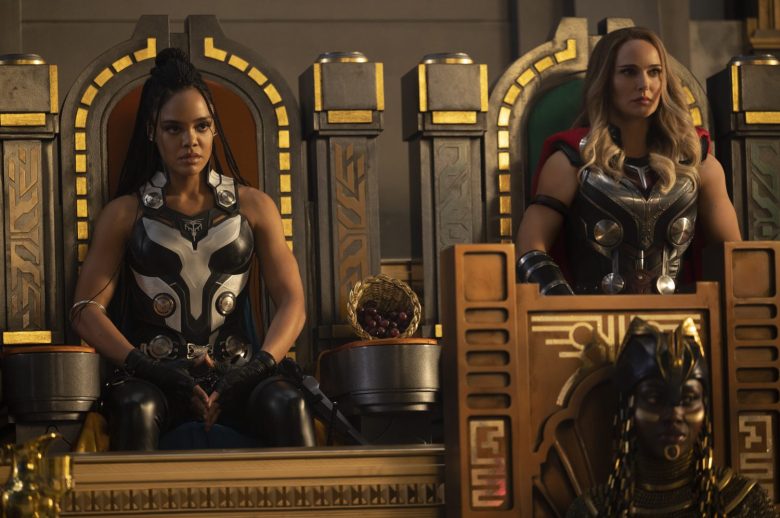 “Well, I was very, very lucky to have worked with Tessa before. We had worked on ‘Annihilation’ before and then have been very close afterwards for the past several years,” Portman said. “So to come on set and have this really good friend there already, who also had experience working with Taika on ‘Thor: Ragnarok,’ who kind of let me know kind of what the vibe was on set, what the style was, that was really, really wonderful thing to have.”

In the film, Jane and Valkyrie appear to become fast pals after Jane arrives in the tiny little village that holds the entirety of the current Asgardian population (which ultimately appeals to the film’s baddie, Christian Bale as the nefarious Gorr). Even before Thor and Gorr arrive on the scene, the duo are bonded (Valkyrie seems pretty hip to Jane’s foibles, like her inability to come up with a natty catchphrase, and they even have something of a special handshake between their chosen weapons).

Asked if there were more scenes between the women that didn’t make the final cut, Portman was enthusiastic. There’s enough material that she “would love as its own spinoff.” She added, “I’d be really, really happy if we could see that. Because there certainly is kind of a missing period in the film. … I feel like you don’t necessarily see how they’ve become close [in the film], and so I would definitely be open and excited to see that.”

A Disney release, “Thor: Love and Thunder” will hit theaters on Friday, July 8.
Click to expand...