A little girl not named Grace sits quietly at the center of Barry Jenkins’ “The Underground Railroad.” Introduced in the third episode holding a finger to her lips, “Grace” — played by Mychal-Bella Bowman and whose real name constitutes a minor yet precious spoiler — has been hiding in a cramped attic for many, many months, waiting for the real, operational, underground railroad to whisk her out of North Carolina and into safer, less confined spaces. Grace isn’t the show’s lead, or even one of the leads, though she does cross paths with Cora (Thuso Mbedu), the chief protagonist and most seasoned traveler, when the grown runaway crawls into Grace’s stooped refuge, seeking similar concealment from the malevolent forces out for them both.

Like so much of the Amazon Prime Video limited series, Grace blends literal and figurative interpretations; she’s a flesh-and-blood character and an ethereal embodiment of life itself; she’s inspired by Harriet Jacobs, a real woman who hid in an attic for seven years before she could escape to freedom in the North, and she’s a mysterious amalgamation who plays by her own rules. Grace drifts out of the story as softly as she’s brought in, but her presence lingers in a way befitting one of the series’ few expansions on Colson Whitehead’s novel. For an adaptation that adheres closely to its Pulitzer Prize-winning source material, Grace stands out as more than just enrichment to the text; she’s a reference to the author’s past work, an avatar for the many Black children (and even adults) running through this story, and a symbol of how exquisitely “The Underground Railroad” frames its historical fiction to drive home lasting truths.

Similar layers exist throughout the 10-episode saga. “The Underground Railroad” employs aspects from traditional slave narratives, including sadistic torture and villainy, but it builds off these graphic scenes instead of making them the focus. (The second episode feels like it’s calling out past movies and shows that defined Black characters primarily through pain, as white curators at a museum ostensibly founded to honor African American history emphasize cruelty over curiosity.) Later chapters also prove remarkable in their tenderness, as Jenkins’ trademark patience behind the camera builds romance and passion with powerful precision, establishing unique individual identities while fleshing out each subject, no matter how many scenes they get. Nothing in this world is untouched by slavery, and yet human nature at its purest still shines through, unvarnished, in far more characters and moments than anyone could imagine.

On a Georgia plantation prior to the Civil War, a tall, blue-eyed, formerly free man named Caesar (Aaron Pierre) tries to convince Cora to run north. She refuses, at first, too tied to the people she’d have to leave behind and to the life she’d been born into, but eventually she relents. After all, her mother Mabel (Sheila Atim) left years ago, when Cora was little, and now she’s a local legend — admired for her courage and feared for the precarious example she’s set. Cora sees what happens to runaways who are caught, and so does the audience. These early scenes are horrifying enough to make you turn away yet illustrative of that very point: Anyone would want to run, but few could face such consequences.

Soon “The Underground Railroad” moves on from its plantation setting. On the run from an notorious slave catcher named Ridgeway (Joel Edgerton), Cora ventures into South Carolina, North Carolina, Tennessee, and Indiana, where the distinct lands and citizens are nevertheless united in their inhospitable disposition toward Black people. The small town of Griffin, S.C. seems downright utopian compared to the merciless fields of Georgia, but appearances can be deceiving. (The episode plays out like a better hourlong version of “Them,” or a similar horror show drawing from history’s bleakest corners.) North Carolina wears its hatred on its sleeve: All Black people are outlawed, whether they’re slaves, free men, or anything in between — it’s a crime simply to exist. Tennessee and Indiana take on various identities depending on the episode. One hour sends Cora through hell on Earth, as she traipses over literal scorched Earth in search of hope amid desolation. Another entry discovers a welcoming community of wine-makers, where Cora can see a future beyond her next breath. (It’s a marvel to watch Jenkins’ camera rise and fall to mirror his subjects’ emotional states, soaring to impossible heights in good times and sinking into the dirt during their lowest points, finding tactile beauty in each shot.) 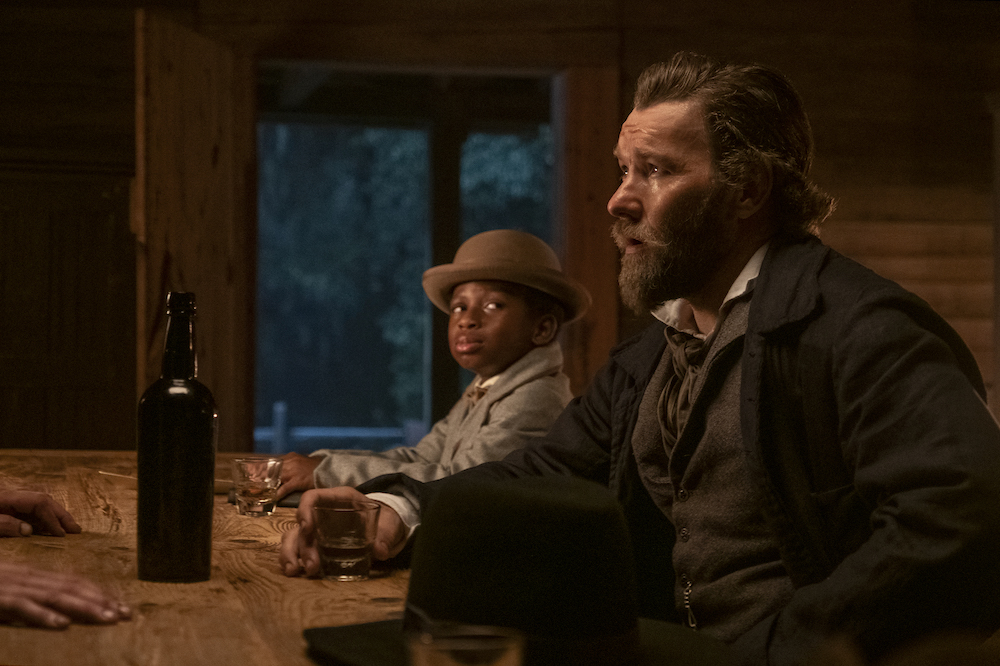 Chase W. Dillon and Joel Edgerton in “The Underground Railroad”

By connecting stories with states and dividing states into telling topics, Jenkins and his co-writers — Jacqueline Hoyt (“The Leftovers”), Nathan C. Parker (“Moon”), Allison Davis, Adrienne Rush, and Jihan Crowther — flex their strong episodic structure and make you wish Amazon had released the show weekly, so each entry could be properly examined in real-time. From the fleeting yet singular performances (like Calvin Leon Smith in Episode 6) to each remarkable shot (captured by D.P. James Laxton) and impeccable music choices (including Nicholas Britell’s hymnal score and known tracks picked by Jenkins for each set of end credits), every episode provides an immense amount of material to dissect and discuss, all of which is more important than reaching the end of the narrative — “The Underground Railroad” won’t reward you for bingeing all 10 hours in a day (it is not a movie), but it could’ve benefited from having 10 days (or so) to break down each finely crafted hour.

But really, any sort of rapid consumption would prove antithetical to Jenkins’ overall mission. What’s so striking about “The Underground Railroad” is how richly it captures the interiority of its characters, no matter how much time they’re given. Cora steers nearly every episode, which provides the talented newcomer Mbedu ample time to push her freedom-seeking journeywoman through staggering emotional terrain; with little-to-no overt exposition, Cora’s choices always add up, even as her internal progression grows more complex by the day. The sturdy episodic arcs allow Jenkins to dip into other people’s stories, including an astounding, unexpected three-part arc for Ridgeway, of all people. Edgerton deserves as much credit as his crew for avoiding the pitfalls common to villains of the antebellum South; framed as Cora’s unwanted savior as often as her unrelenting hunter, there’s a fiery guilt driving this complicated slave catcher, and Edgerton — along with his amateur partner Homer, played with maturity beyond his years by Chase Dillon — softens and hardens his antagonist with enough regularity to keep audiences from knowing what to expect, yet still knowing Ridgeway on a human level.

This brings us back to Grace. Without delving any further into spoiler territory, part of her resolution is carried out as a wordless retort to a line in the previous episode. During some drunken philosophizing, Ridgeway says, “The will of the spirit is nothing compared to the heart that’s overwhelmed with hate.” As ugly as it sounds, there’s truth to his claim, and Jenkins’ story lives in that hate long enough for its power to sink in. But Grace won’t let it consume her. Hate burns like fire through “The Underground Railroad,” and its protagonists feel the heat. Some are even badly burned, but none are ever engulfed. As the end credits roll, they stand in peaceful, loving defiance, one character after the next laughing and smiling together, or simply staring back at you, dear viewer, asking for their resilience, their experience, to be acknowledged. Barry Jenkins & Co. have done just that. Before the final needle drop, it’s impossible not to feel closer to this world and everyone in it.

Cora to Caesar, Ridgeway to Grace, their lives burst free from the confined corners of history, recontextualizing the American experience — from the past through the present, and from fiction, finding truth.

“The Underground Railroad” premieres all 10 episodes Friday, May 14 on Amazon Prime Video.
Click to expand...