Mindy Kaling’s name speaks for itself in Hollywood — for better or worse.

The comedy multihyphenate who got her start writing for and acting in “The Office” just starred in HBO Max’s “Velma,” an adult series executive produced by Kaling and created by Charlie Grandy. In January, Kaling’s first solo show, 2012’s “The Mindy Project,” made its Netflix debut. The perfect storm of new and old — highlighting common threads in Kaling’s work — has resulted in a fresh wave of online backlash against the creator and her oeuvre. This latest round of criticism cites internalized racism, lazy writing, and more issues, but what’s driving those feelings is actually quite simple: fatigue. At this point in her career, Kaling fans know the type of character that she will play or write, yet some viewers continue to hate-watch and fume at what the creator long ago stated as her thesis.

HBO Max announced Kaling would be voicing the well-known “Scooby-Doo” character back in 2021, a decision that Kaling herself said was met with positive feedback. When it was later revealed that the character would be reimagined as South Asian in Kaling’s image, the backlash was so strong that Kaling herself felt it. A lot of it — claiming that this was no longer the beloved character that many grew up with, that it was no longer Velma — carried racist undertones, a nasty and frequent response to minority casting announcements, especially ones that build out characters who were originally white.

With “Velma” now out in the world (IndieWire gave the show a “B-“), the conversation has shifted, and the complaints are familiar to anyone who follows Kaling. At the top of a list of qualms lobbied on social media is that “Velma” appears to be another character in a familiar Kaling mold: an Indian-American woman with a specific cocktail of dry humor and self-loathing, whose identity isn’t intertwined with her culture and who has a crush on a cis-het white male. It’s a valid concern when it comes to “The Sex Lives of College Girls” or “Never Have I Ever,” but Kaling crucially did not write or create “Velma.” The character undoubtedly took shape around her casting, but the show bears a lot of displaced viewer frustration (and an apparent tide of hate-watching).

Meanwhile, the Netflix debut is many viewers’ initial exposure to Fox’s “The Mindy Project,” the first show Kaling created and the first iteration of her soon-to-be-repeated character type. A lot of “The Mindy Project” — like many of its contemporary shows like “New Girl,” “Happy Endings,” or “How I Met Your Mother” — hasn’t aged well. It is a product of the TV comedy era in which society was theoretically post-bigotry and post-offense — offending everyone in order to offend no one. It’s the argument used by present-day comedians to defend the unshakeable habit of punching down — a dated philosophy that even pops up in “Velma,” a show that should at least be doing better to keep up with the times. 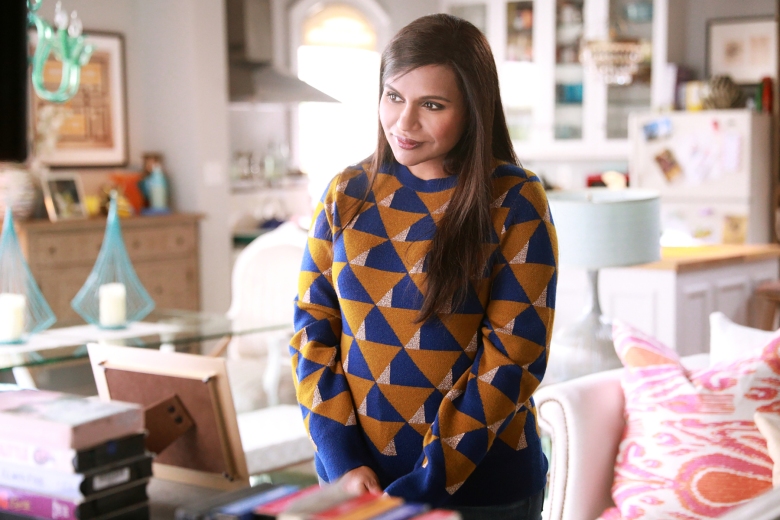 Here are some of the online criticisms lobbed at Kaling over “Velma’s” premiere weekend: that her writing damages young girls, that she’s part of a class of South Asian comics whose humor is outdated, that she was brainwashed by her Ivy League New England education, that she’s Islamophobic, that she’s a TERF. Some of these are compelling arguments, some rooted in fact, some conflating her views with her characters, and at least one based on…liking a tweet.

It’s certainly worth raising the concern that the “sex-obsessed brown girl in love with white men” is not the healthiest depiction of South Asian American women on television, but Kaling’s work paved the way for new, fresh voices to add their own version as well. (It’s on studios and networks to bet on that talent, and somewhat on them for repeatedly turning to Kaling for any kind of South Asian representation.) The Islamophobia cited in “The Mindy Project” is painful but intended as satire (again, worth looking at through the critical lens of hindsight); “Never Have I Ever” arguably spotlights the very real prejudice between Hindus and Muslims, but misses a chance to examine why it’s harmful.

Kaling and peers like Aziz Ansari came up in an entertainment industry that was built to work against them, to shut them out, and they blended in until they were allowed to stand out. Their voices can come off as confused because their journeys to fame — and to writing Indian American characters — were confusing. Kaling’s characters aspire to whiteness because that is what she and countless others were told to do for generations. No wonder it doesn’t resonate with some modern viewers.

Between the bookends of “The Mindy Project” and “Velma” is the rest of Kaling’s career, with lead characters based on or played by Kaling herself (sometimes both). From “The Office” to “Late Night,” they share similarities adding up to the exact portrayal that is the last straw for many viewers of “Velma.” This is fatigue, pure and simple. Kaling’s modus operandi has grown stale for casual viewers who seem irked not even by watching her latest projects, but that they even exist. It’s the kind of cynicism found elsewhere in Hollywood, with viewers who tire of someone like Ryan Reynolds or Adam Sandler consistently playing the same character — yet this kind of vitriol is rarely directed at those actors, and white men especially.

Kaling’s detractors simply need not watch her work — and her defenders need not justify this highly successful woman repeatedly writing what she knows and what has already proved to work. There is barely evidence to suggest that Kaling’s next original project (both “Never Have I Ever” and “The Sex Lives of College Girls” will return) — writing, acting, producing, or starring — will not follow the formula she set for herself back on “The Office.”

Charged responses like these crop up because a creator touched a nerve. Casting outrage aside — again, it’s racist — unpacking Kaling’s characters can be a constructive exercise, but even if she reads every critique there’s no guarantee of change. For viewers who are simply tired of seeing the same, the easy answer is to tune out. For those hurt by the specific themes and characteristics she revisits, these conversations can amount to more than directing all ire at Kaling. And for Hollywood executives, there’s a clear demand for numerous, nuanced South Asian characters with new voices behind them (literally and figuratively) — an opportunity that should be seized.

“Velma” is now streaming on HBO Max, with two new episodes every Thursday. “The Mindy Project” is available on Netflix.
Click to expand...