In the fall of 2003, a new nurse arrived at a quiet hospital in the middle of New Jersey. He was mild-mannered and affable, with an impressive resume of former gigs. His name was Charles Cullen. Call him Charlie. He quickly became friends with fellow nurse Amy Loughren, who was also good at her job and kind to those who came into her orbit. Both were hiding secrets: Amy had recently learned she had a disease that required a heart transplant, one she could not afford until she had finished up six months at her new-ish gig at the hospital (that’s, of course, when her medical benefits kicked in); Charlie was a serial killer.

What happened when Amy met Charlie, and then discovered his horrifying secret and helped bring him to justice, is well-dramatized in Tobias Lindholm’s appropriately chilly “The Good Nurse.” Based on Charles Graeber’s book “The Good Nurse: A True Story of Medicine, Madness, and Murder” and exactingly adapted by “1917” screenwriter Krysty Wilson-Cairns, Lindholm’s version of a serial killer procedural drama keeps everyone, from its twisted murderer to the woman who finally stopped him and even the audience itself, at a remove. It’s a nifty fit for the Danish filmmaker behind similarly cold-blooded dramas like “A War” and “A Highjacking,” who establishes a sense of unease from the film’s opening moments and never quite relents.

Initially kicking off in Pennsylvania in 1996, “The Good Nurse” introduces Charlie (Eddie Redmayne) in his favorite habitat: a drab hospital, where a patient is dying before his very eyes. As the pressure mounts and Charlie moves gingerly out of the way, all sloped shoulders and put-on attentiveness, cinematographer Jody Lee Lipes pushes in, closer and closer. Even as the patient dies and the rest of the hospital staff reels, Charlie doesn’t flinch. The audience, however, will.

Seven years later, Charlie lands a new job at yet another hospital, one shortchanged by budget cuts and very much in need of good help. Nurse Amy Loughren (a perfectly calibrated Jessica Chastain) is wonderful at her job, but it’s taken a major toll on her, both physically (soon we’ll learn more about the ailment that keeps her out of breath and always scared) and emotionally (a single mom, Amy is constantly just scraping by to keep her two cute daughters in sneakers and under one roof). Charlie seems like a godsend, someone not just capable when it comes to nursing, but genuinely interested in Amy and her girls’ life. They bond immediately, and within weeks, it’s as if Charlie was always a part of Amy’s life.

There is so much she doesn’t know. But she’ll find out. 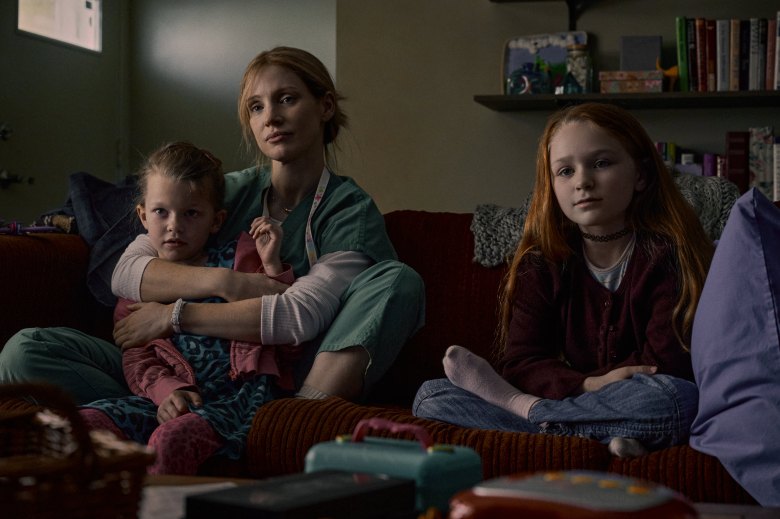 While Graeber’s book covered much about the case, the author spent significant pages detailing the real-life Cullen’s biography, attempting to unravel his pathology, and even took aim at the broken nature of America’s hospital system itself, but Wilson-Cairns zeros in on Amy’s life as the emotional center of the story, grounding this nightmare in something very real. Her screenplay also introduces a handful of Cullen’s victims (now estimated to push past 300 total) as they enter Amy’s orbit and eventually come into contact with Charlie. With so many victims, it would be impossible to include even a fraction of them all, but Wilson-Cairns spends precious time on a pair of women who are ultimately killed by Charlie’s nefarious techniques, but only after Amy (and the audience) have come to know them.

These choices provide emotional ballast for what’s to come, and push Chastain into delivering an effective performance in a very quiet package. While the stakes of bringing Charlie to justice stretch far beyond just Amy and her family, keeping us fixed on Amy, a naturally sympathetic character, adds necessary emotion, particularly as “The Good Nurse” moves into more procedural territory.

After one death, a pair of local cops (Noah Emmerich and Nnamdi Asomugha, both solid) are brought into investigate, even though the hospital and its lead administrator (a steely Kim Dickens) give them precious little to work with. But as they’re hammering away at this strange case, Amy is also starting to wonder what’s really going on with her good friend Charlie, and as the trio come together to unravel the mystery and the murders, “The Good Nurse” snaps further into focus, culminating in a spine-tingling (if likely slightly fictionalized) showdown in which Chastain finally reveals her full power and Redmayne doesn’t flinch.

Anyone looking for reasons as to why Charlie did what he did will not find them in “The Good Nurse.” (Netflix will release the film in October, one month later the streamer will also debut a related documentary, “Capturing the Killer Nurse,” which may have further insights to offer.) That’s no knock against the film, which quite boldly doesn’t try to tie anything up in a neat package, mostly because a) that’s how it was in real life, as Cullen has still never attempted to explain his actions and b) it speaks to the reserved nature of Lindholm’s latest. It may leave some audience members cold, but it should really leave them chilled to the bone.