news The Frenetic Editing of ‘Elvis’ Is a Matter of Perspective

Many critical responses to “Elvis,” both positive and negative, have been based on the assumption that the movie is told from the perspective of Tom Hanks’ manipulative and self-serving Colonel Parker. To say that Parker tells the story just because he narrates it is to ignore every aspect of cinematic storytelling aside from the screenplay, a fundamental mistake with any filmmaker — but especially with one as holistic in his sensibility as “Elvis” director Baz Luhrmann.

Luhrmann’s approach to point of view is more sophisticated than either his partisans or his detractors acknowledge: While Parker is unquestionably a voice in the story (a voice which is already complicated by the fact that he’s a liar and thus a completely unreliable narrator), the movie really belongs to its title character, whose unfulfilled longing for emotional and artistic serenity finds its visual corollary in Luhrmann’s frenetic yet intimate camerawork. Parker tells the tale, but it’s Elvis’ visceral experience that we’re invited to share.

Even the soundtrack doesn’t really belong to Parker, as his narrator’s voice takes a back seat to a cacophony of crowd noise, music, media reports and memories that plunge the audience further into Elvis’ head as well as into the psyche of the culture at large — even more than Elvis or Parker, the film is told from the point of view of the America that made them both legends.

“Elvis” is a movie that goes both deep and broad, capturing what it’s like to be a celebrity at the center of a maelstrom from the vantage point of both the celebrity and the maelstrom; it’s immediate and reflective at the same time, one of the few historical films that seems to exist in the present tense.

The task of preserving and clarifying the wide range of Luhrmann’s visual, aural, and thematic preoccupations — while still giving “Elvis” a coherent shape and rhythm — fell upon editors Jonathan Redmond and Matt Villa, who built on their previous collaboration with Luhrmann, “The Great Gatsby,” in their attempt to tell a classic story in modern terms.

“Baz was very clear even the early phases of development and pre-production that he wanted it to feel contemporary,” Redmond told IndieWire. “In ‘Gatsby,’ we often used hip-hop alongside of or in the place of jazz, so that the audience could decode just how radical and exciting jazz was in the 1920s. Baz wanted to do the same thing here.”

By integrating original Elvis recordings with covers performed by Austin Butler and modern tracks by artists including Doja Cat, Eminem, and Måneskin, the movie creates a bridge between the period in which it takes place and the present day, clearly and concisely conveying how sexy, dangerous, and thrilling Presley was in his moment. The integration of different musical styles works in other ways too; at times the movie reaches further back into the past to splice gospel music with country and rhythm and blues to give the viewer a direct line into the musical influences taking up residence inside Elvis’ brain.

For Villa, it was all in service of one goal. “We always intended to turn the biopic on its head whenever possible,” he told IndieWire. “‘Biopic’ was a dirty word in Baz’s mind.” 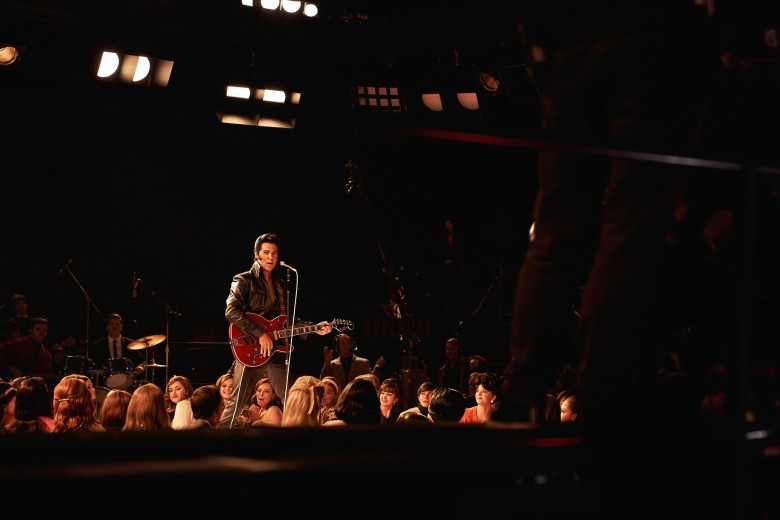 Avoiding the usual beats of the biographical film in favor of an impressionistic structure that gives about 30 times the emphasis to one event in Elvis’ life (his 1968 “Comeback Special”) than another (his entire decade-plus movie career, which is introduced and discarded in about a minute), Redmond and Villa were able to drill into the moments that synthesized Elvis’ personal crises with the crises of a nation in turmoil. The “Comeback Special” comes at a time when Elvis’s career is at a low point, but also at a moment of political assassinations and war; the personal and the global inform each other in productive ways as the editors juxtapose archival audio and news footage with a meticulous recreation of the television performance that serves as Elvis’ response to the times.

“We elongated that sequence because there was so much happening both from a world-historical point of view and in terms of Elvis’ development and his relationship with the Colonel,” Villa said. “It really presented an opportunity to pinpoint their decline, as Elvis came back to the music he loved, which is not what the Colonel wanted him to do at the time.”

That tumultuous relationship between Elvis and Colonel Parker provided the editors not only with an anchor for the comeback special, but also the unifying principle they needed to get the movie down from its initial running time of over four hours. “The longer assembly really did play, but obviously it had to come down,” Villa said. “As we finessed the cuts the most important moments started to reveal themselves, and many of those had to do with Elvis and the Colonel.” Because the film started so much longer than they knew would be acceptable for a wide theatrical release, the editors were able to keep their objectivity during the year-long post-production schedule: “There was so much that had to come out that it became like a new film each time,” Villa recalled. “It was quite easy to look at each new cut with fresh eyes.”

The whittling meant the editors had to lose a lot of favorite material, from delicate personal moments like an early scene between Elvis and his first girlfriend to portions of the electrifying musical numbers. “Every song that you see in the film was shot in its entirety, and we edited them in their entirety,” Villa said. “There was a lot that came out there that I was sad to see go, and there were lovely scenes between Elvis and his first band.”

The major cuts led to some sensitive moments at early screenings. “We attended a couple of screenings with actors who didn’t know how little they were in the film. You’d gladly walk into the cinema with them, but try to avoid them when you’re walking out.”

Aside from the relationship between Elvis and Parker, the musical numbers were another structural guide, as Redmond and Villa used them as signposts to articulate specific stages in Elvis’ development. “We were spoiled with choices in all the concert scenes,” Villa said. “They were shot very conventionally, from beginning to end with multiple cameras, and our challenge was that each of them served a different purpose. The Louisiana Hayride was there to show Elvis being unleashed on the world, so there was a great freneticism to that sequence to show that this was a force of nature no one had ever seen before. Then the baseball field scene was all about defiance, so we started slowly to lull everyone into a false sense of security.

And there are the Vegas years, which have a different purpose and a different style. Our challenge was to figure out what style served each purpose best while keeping all the narrative streams going.”

That challenge was made slightly more manageable by the integrated approach Luhrmann takes to his films, in which all of the departments are in constant communication from pre-production to release. “Often as an editor your job is just to sit at a desk and someone hands you a hard drive and you cut it,” Redmond said. “On a Baz Luhrmann movie it’s never like that. Matt and I were involved in the initial script development and all the way through — I was on this project so long that now I’ve got two babies that I didn’t have when we started.”

Villa added, “Usually you cut the movie and you hand it off to the music department or the sound department, but with Baz every department is happening at the same time and there’s a beautiful alchemy that comes out of that. Jon and I literally worked next door to music editorial and the composer, and that’s not only a delightful way to work but an essential one given that in Baz’s films everything informs everything else.”

“Working on a Baz Luhrmann movie isn’t a job, it’s a vocation,” Redmond concluded. “It’s a labor of love. I’ve edited some of his stuff on boats, and I’ve been hanging out of helicopters with him timing shots. You never really know what’s going to happen next, and from an artist’s point of view that’s fun and exciting and different. It’s a constant creative adventure, and that’s what I love about working on his projects.”
Click to expand...

news ‘Elvis’ Will Enter the Building Next Tuesday via PVOD, Not HBO Max