news ‘The Falcon and the Winter Soldier’ Review: Episode 4 Proves It’s Still All About Steve (Rogers)

[Editor’s Note: The following review contains spoilers for “The Falcon and the Winter Soldier” Episode 4, “The Whole World Is Watching.”]

A specter is haunting “The Falcon and the Winter Soldier” and based on “The Whole World Is Watching” there’s no exorcising it. The ghost of Steve Rogers’ Captain America was inescapable during the fourth episode, which saw a new entrant (however unlikely) in the Captain America sweepstakes and witnessed the probable destruction of the current shield-bearer. Given that the Disney+ series is the MCU’s first Captain America story since Steve’s exit — building off his legacy while ushering in his successor(s) — it might be best to assess the critical events of this week’s episode through the various components that made up our original Star-Spangled Man with a Plan: the man he always was, the serum that amplified his attributes, and what he stood for while carrying his shield.

“Do you want to kill Nazis?” – Dr. Abraham Erskine
“I don’t want to kill anyone, but I don’t like bullies; I don’t care where they’re from.” – Steve Rogers
Click to expand...

Steve Rogers, the Jack Pearson of superheroes, was unflinchingly perfect. If he saw a situation pointed south, as in “Captain America: Civil War,” he couldn’t ignore it. It’s what led to his dissatisfaction with the stars and stripes and his crossing of a patriotic Maginot Line. De-facto leader of The Flag Smashers Karli Morgenthau (Erin Kellyman) finds herself in a very similar position. The world of the MCU post-blip is awful (and, unfortunately, sounds a lot like our world), with income inequality growing more cavernous and government aid less and less reliable.

During a mission to retrieve the rest of the super-soldier serum she and the other Flag Smashers stole from the Power Broker, Karli and one of her acolytes have a long conversation about Captain America, where her follower suggests she could be the new Cap as “a leader who looks like them, who understand their pain.” Karli is trying to rectify the ills of the world through an “eat the rich” philosophy, but her methods seem a tad messy and too often villainous. Cap would never blow up a van, killing civilians, nor threaten to murder someone over the phone.

Erin Kellyman in “The Falcon and the Winter Soldier”

Zemo, no fan of super soldiers, is quick to remind Bucky and Sam that as someone who willingly took the super soldier serum, Karli is a supremacist on a radicalized path. When Bucky states that “the serum never corrupted Steve,” Zemo responds, “Touché. But there has never been another Steve Rogers, has there?”

“So, good becomes great. Bad becomes worse. This is why you were chosen. Because a strong man, who has known power all his life, will lose respect for that power.”
Click to expand...

These, of course, are the words spoken by Dr. Abraham Erskine (Stanley Tucci) the night before Steve Rogers is given his dose of the super-soldier serum (alongside a whole bunch of vita-rays), which transforms the scrawny and scrappy kid from Brooklyn into the original Star-Spangled Man with a Plan, Captain America. In the film, this is used primarily to distinguish Steve from Red Skull, the first recipient of Erskine’s formula, whose quest for power would become his ultimate undoing. Revisiting that line, however, in the wake of “The Whole World Is Watching,” brings all sorts of shades of gray to what was once a fairly black-and-white issue (Cap:good::Red Skull:bad).

Karli has not gone full Red Skull, but she is seemingly fighting the divergent aspects of her personality. After Zemo (really the only person moving the plot forward) finds out where the funeral for Karli’s surrogate mother Donya Madani will be held, Sam attempts to use his grief counseling background to rationalize with the lead Flag Smasher, acknowledging the helplessness of the needy, but assuring her that killing people doesn’t make it a better world. “You’re either brilliant or hopelessly optimistic,” chides Karli. Sam asks back, “Well, can’t I be a little bit of both?” And he’s right. That description could also describe Steve Rogers, who even after becoming disillusioned by the government would fight for a just cause. 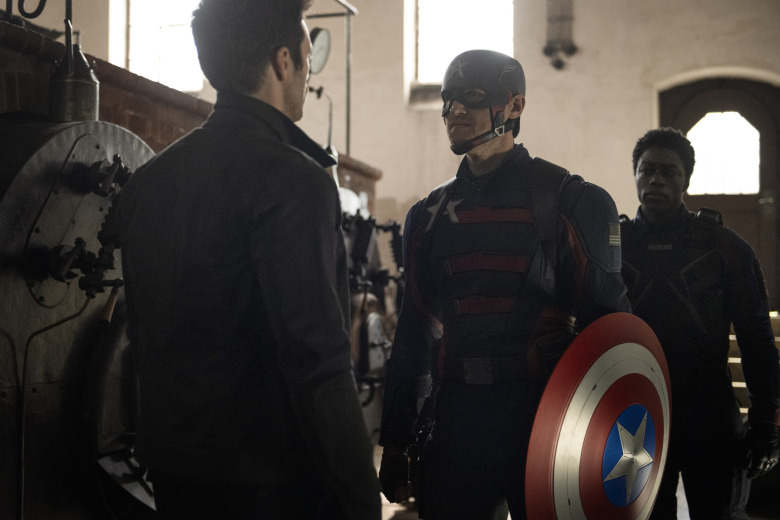 Sebastian Stan, Wyatt Russell, and Clé Bennett in “The Falcon and the Winter Soldier”

It should be noted that during Sam’s cordial chat with Karli, New Cap (like New Coke) John Walker is spazzing in another room with Zemo, Bucky, and Battlestar, which leads to him making his first, but certainly not last, bad decision of the episode. Walker busts in on Sam and Karli which allows the latter to escape, but not before getting shot by Zemo and dropping all the remaining super soldier serum. Zemo, single-minded in his goal, tries to destroy all the serum, before being stopped by Walker, who spots and pockets the last remaining vial (bad decision No. 2).

“That shield doesn’t belong to you. You don’t deserve it! My father made that shield!”
Click to expand...

A defeated Tony Stark spoke those words at the end of “Captain America: Civil War” after Steve plunged his vibranium shield into Iron Man’s arc reactor (an image mirrored in an incredibly dark way at the end of this episode). Steve, in response, dropped the shield, choosing to save his friend’s life rather than hold onto the symbol.

After blowing Sam’s attempt to reason with Karli, John Walker makes his third bad decision of the episode when he condescends to Ayo (Florence Kasumba) and the rest of the Dora Milaje. The ensuing fight may be the highlight of the episode, if only to watch Walker get suitably thrashed, but also to see just how fierce the Dora Milaje can be. (Bonus points for the Five-Point Palm Exploding Heart Technique that causes Bucky’s arm to fall off.) The drubbing at the hands of Ayo and Co. leaves New Cap in a bad way. “They weren’t even super soldiers,” he bemoans to Battlestar. Is there anything more dangerous than an emasculated man with latent feelings of inadequacy?

Wyatt Russell in “The Falcon and the Winter Soldier”

Walker inevitably takes the serum (bad decision No. 4) in the hopes that he can go toe-to-toe with The Flag Smashers, and for the briefest of moments, it works. But eventually, he’s overpowered and about to be impaled by one of the many knives the revolutionaries wield. That is, until a non-super-soldier-serum-aided Battlestar intervenes, and in the ensuing moments he’s kicked super-soldier-style into a column by Karli, which seemingly kills him.

What follows is John Walker’s potentially final bad decision as Captain America, showcasing all the ways in which he wasn’t fit to serve as Steve’s heir and how the serum magnifies the man, which in Walker’s case seems to be a mix of PTSD and a general asshole complex. In a rage, Walker stalks a lone Flag Smasher, knocking him to the ground, and proceeding to smash the shield down edge-first, repeatedly, for what seems like minutes. A crowd gathers around, filming on their phones, aghast and in horror.

“That shield is a monument to a bygone era,” Karli said, earlier in the episode. “If anything, that shield should be destroyed.” Mission accomplished. Whatever Captain America meant before, it will be hard to erase the image of that shield, once a symbol of hope and justice, with its bottom third coated in blood dripping to the ground. 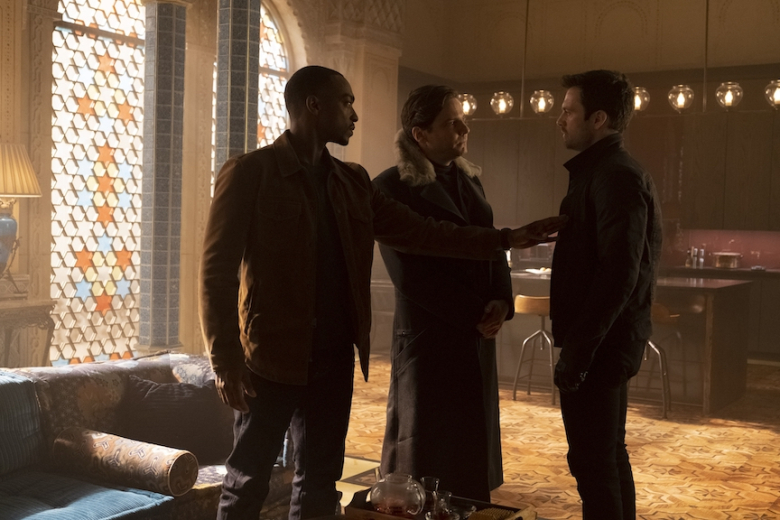 Anthony Mackie, Daniel Brühl, and Sebastian Stan in “The Falcon and the Winter Soldier”

Overall, “The Whole World Is Watching” was a slightly less exciting entry after the previous few episodes, perhaps because so much of it was focused on Karli and John. And while getting a little more backstory into Karli’s motivations (however non-sensical they may be) is likely important table setting, boy, was all the John Walker stuff a slog. It’s hard to say whether John Walker isn’t an intriguing character because of how he’s written or how Wyatt Russell is playing him, but everything comes off as one-note. No action he takes is surprising. He’s just a high-strung putz who seems to make the wrong decision at every turn.

This week’s episode also felt strangely slow, lingering on faces maybe a few beats too long, with the additional time not adding any new information. Here’s hoping the show can return to its buddy cop bread and butter, where Bucky and Sam bicker while simultaneously kicking ass, for the next couple of weeks.

And if showrunner Malcolm Spellman, director Kari Skogland, and Marvel head Kevin Feige are to be believed, “The Falcon and the Winter Soldier” was always planned to be a six-hour film rather than a traditional television show, which places “The Whole World Is Watching” at the end of its second act. Much like its MCU-on-Disney+ predecessor “WandaVision,” it’s likely the last two episodes will be chockfull of action — and attempts to tie up as many loose ends as possible. (Remember Isaiah Bradley?!)

“The Falcon and the Winter Soldier” debuts new episodes Fridays on Disney+.

news ‘The Falcon and the Winter Soldier’ Explainer: Catch Up on the Heroes’ History

news ‘The Falcon and the Winter Soldier’: Shooting a Psychological Thriller About the Legacy of the Shield

news ‘The Falcon and the Winter Soldier’ Review: Episode 3 Seeks Out the ‘Power Broker’ in Zemo Dark Thirty