news Syfy Had No Problem with Gory ‘Chucky’ Season Finale

Editor’s note: Spoilers below for the season finale of “Chucky.”

This season of Syfy’s “Chucky” series swung for the fences.

Narratively, the season took our teenage leads out of Hackensack, New Jersey and into the Catholic school which murderer turned living doll Charles Lee Ray (voiced by Brad Dourif) attended as a child. And after a season filled with the murders of children, a priest being blown up, and a meta plotline about Jennifer Tilly being possessed (by a character played by Jennifer Tilly), series creator Don Mancini took the characters back home for a Hackensack Christmas season finale with Episode 8, “Chucky Actually.”

As Mancini told IndieWire via Zoom, the finale was a capstone to a season that tried to be experimental with the narrative TV format. “I wanted to play with the structure, and the expectations of the [final] episode format,” he said. Since Season 1 ended with Chucky’s Halloween episode, Mancini wanted to contrast that with a Season 2 finale set at Christmastime. “I’ve always wanted to do a big Christmas Chucky thing, so this was our opportunity to do it and see Chucky deck the halls.”

The finale is also meant to set up added suspense. Episode 7, “He Has Risen, Indeed,” saw the characters in heavy levels of peril. One might think the finale gives them a chance to relax and reflect — not the case.

“That’s our brand, to be a little experimental at times. What’s the use of having a TV show if you can’t play a little bit?,” said Mancini. That meant going big with the end of Season 2, culminating in “Chucky Actually” containing the goriest kill the series (and the “Chucky” franchise) has ever embarked upon. Mayor Michelle Cross (Barbara Alyn Woods) comes downstairs to investigate a strange sound, only to have Chucky use a chainsaw to split chop her in half. It’s a long, grotesque sequence, but to hear Mancini talk about it, there was absolutely no hesitation from the Syfy network. 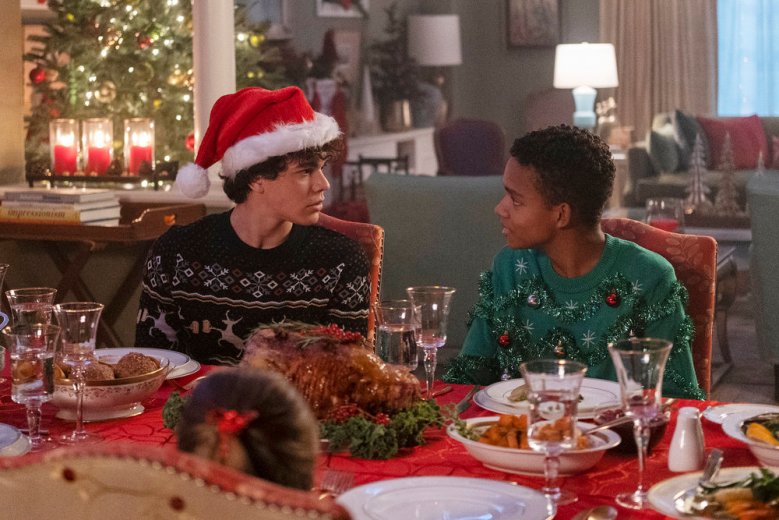 He said that while there was no concern about the show’s violence, there was a bit of hesitation from the network that the meta humor and narrative experiments might be too weird. Case in point, this season’s episode “Death on Denial,” focused on Tiffany Valentine (in the body of Jennifer Tilly) trying to keep those who actually know Jennifer Tilly from finding out Tiffany is impersonating her. “‘Death on Denial’ was a special treat for all of us just to get these other actors in and let’s do something weird,” Mancini said.

So far, Mancini has the show planned through at least five seasons, and he can also see a world where the series runs alongside new films in the “Chucky”-verse. “If the opportunity presented itself” Mancini would be into pulling double duty.

A world where Chucky is on screens big and small would certainly do a lot towards giving the character proper respect in the horror realm. In Chucky’s near-35 years as a horror icon, he’s amassed a following fans, especially those in the LGBTQ+ community, who love the character’s irreverent meta-humor mixed with gore and a smidge of heart. If Don Mancini can give us a character being vivisected at Christmas that ends in a sweet story of friendship, it’s worth it.

news Everything Coming to Netflix in February 2023