news ‘Supervillain’: How the Tekashi 6ix-9ine Documentary Made an Action Figure Into an Artful Monster

“Supervillain: The Making of Tekashi 6ix9ine” has its share of surprises. Karam Gill’s three-part series charts the perpetual rise and fall of one of the music world’s largest antagonists, the process by which Brooklyn-born and -raised Daniel Hernandez slowly transformed himself into rapper and social media archenemy Tekashi 6ix9ine.

Amidst the blend of interviews and archival footage, each episode takes a few well-timed journeys into a dreamlike abstract void. Dubbed in onscreen text as “Elements of a Supervillain,” each of these interstitials takes a part of the Tekashi lore and brings it to an artistic operating table of sorts. With a synthetic Tekashi figure in the center of the frame, disembodied white-gloved hands manipulate and style him as part of a hypnotic, sometimes nightmareish makeover.

“Karam said, ‘Think “Apple meets Kanye’s house.”‘ And I think that was deliberately to contrast with the gritty nature of doing found footage documentary. This was an almost a respite or a palate cleanser,” said Karin Fong, who directed both the “Elements” sequences and “Supervillain” opening credits sequence that introduces many of the visual elements.

Fong and her team at Imaginary Forces design studio worked from both that aesthetic guidance and the idea of largely-unseen forces transforming the documentary’s main subject. Much like “Supervillain” outlines how Tekashi is a product of multiple influences, one no-brainer place to start developing some of the key “Elements” components was the rapper’s very name.

“One of the things that we were really excited about when we were brainstorming early on, one of our designers, Henry Chang, he’s a really big fan of Gundam models, Japanese action figure toys. Tekashi is named after an anime character,” Fong said. “We were talking about the idea of Tekashi as an action figure. What if we broke him down into something that gets constructed, like the actual doll itself? We mold the parts, we put it together, and we construct them from scratch. And that, later on, allows us to have interchangeable parts.” 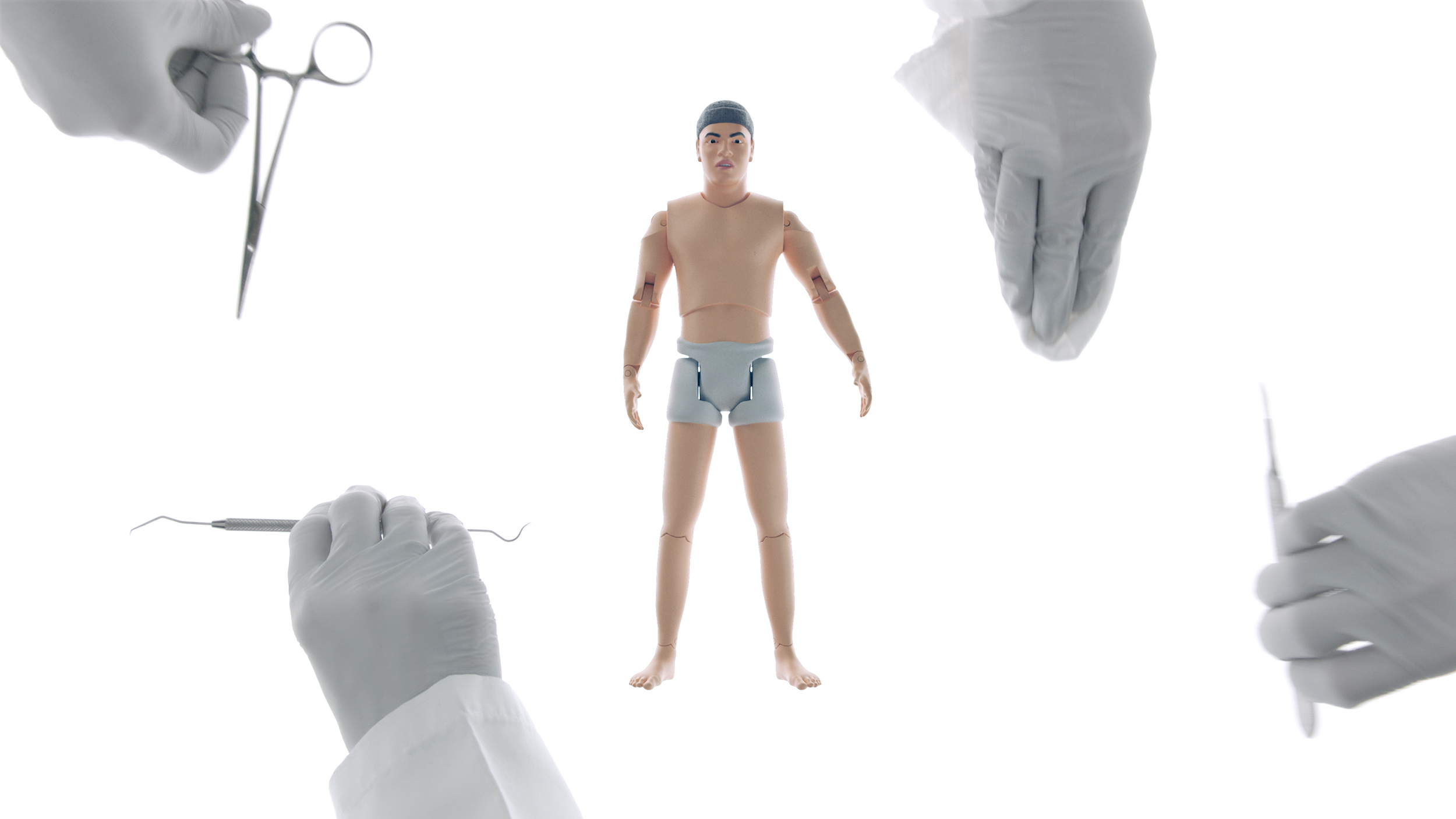 Fong and Imaginary Forces have produced a number of striking visual sequences for TV projects. But unlike the Emmy-winning shadowy Escher-like hallways of the “Counterpart” opening or the shimmering, sinewy wisps from the beginning of “See,” “Supervillain” had the chance to make “Elements” even more tactile, starting with the rainbow letters spelling out the show’s title at the end of the opening credits, made from physical casts.

The same is true for the Tekashi figurine, created by longtime VFX veteran and custom figure designer Tim Sepulveda. From the base figure — about nine inches tall and a modular head that could change for different stages of Tekashi’s transformation — lead designers and animators Henry Chang and James Gardner were able to blend in some of the more elaborate moves that couldn’t be done purely by hand.

“They did a wonderful job with really getting the details of the doll in close-up,” Fong said. “We’ve got a scene where he’s in this prison outfit. There’s a point where it’s slow motion and all the parts of his prison outfit swap and gets redressed in his signature rainbow outfit. It’s like his comeback. We really loved taking the language of action figures or models, that exploded point of view. ”

Sprinkled in amongst the shots of Tekashi being tattooed — and in one case, literally de-faced — are inserts of various neon-colored, bubbling reactions. It’s another piece that makes these “Elements” sequence feel more visceral, matching Giancarlo Esposito’s occasionally menacing narration. The sequences’ prop master Matthew Eikelberger made sure that those science vibes weren’t purely a product of basic trial and error.

“I have to hand it to Matt. He really worked to find the right chemical reactions, the right powders. He researched and got a kit together of some of these reactions that we wanted to get. We’d buy chocolate molds and freeze gelatins into the molds. It was a little bit of a science experiment on set. Some would be a dud, then one would bubble up and it was like, ‘That’s a good one, get it!'” Fong said. “Anybody who paints watercolors knows it starts really pretty and then everything starts to be the same brown. Then you have to start over again. And that’s always the joy of when you’re shooting anything, even as controlled as this. You’re not quite sure what you’re going to get.”

With the flashes of color and the darkly comic voiceover, these “Elements” have a real distinct energy. But perhaps the layer that makes it most unnerving is that collection of hands, fidgeting with and manipulating the 3-D printed Tekashi. They’re present in the show’s opening title sequence, too, prepping this laboratory blank void for whatever comes next. It was key for both Fong and Gill that you never see the full bodies that these hands belong to. 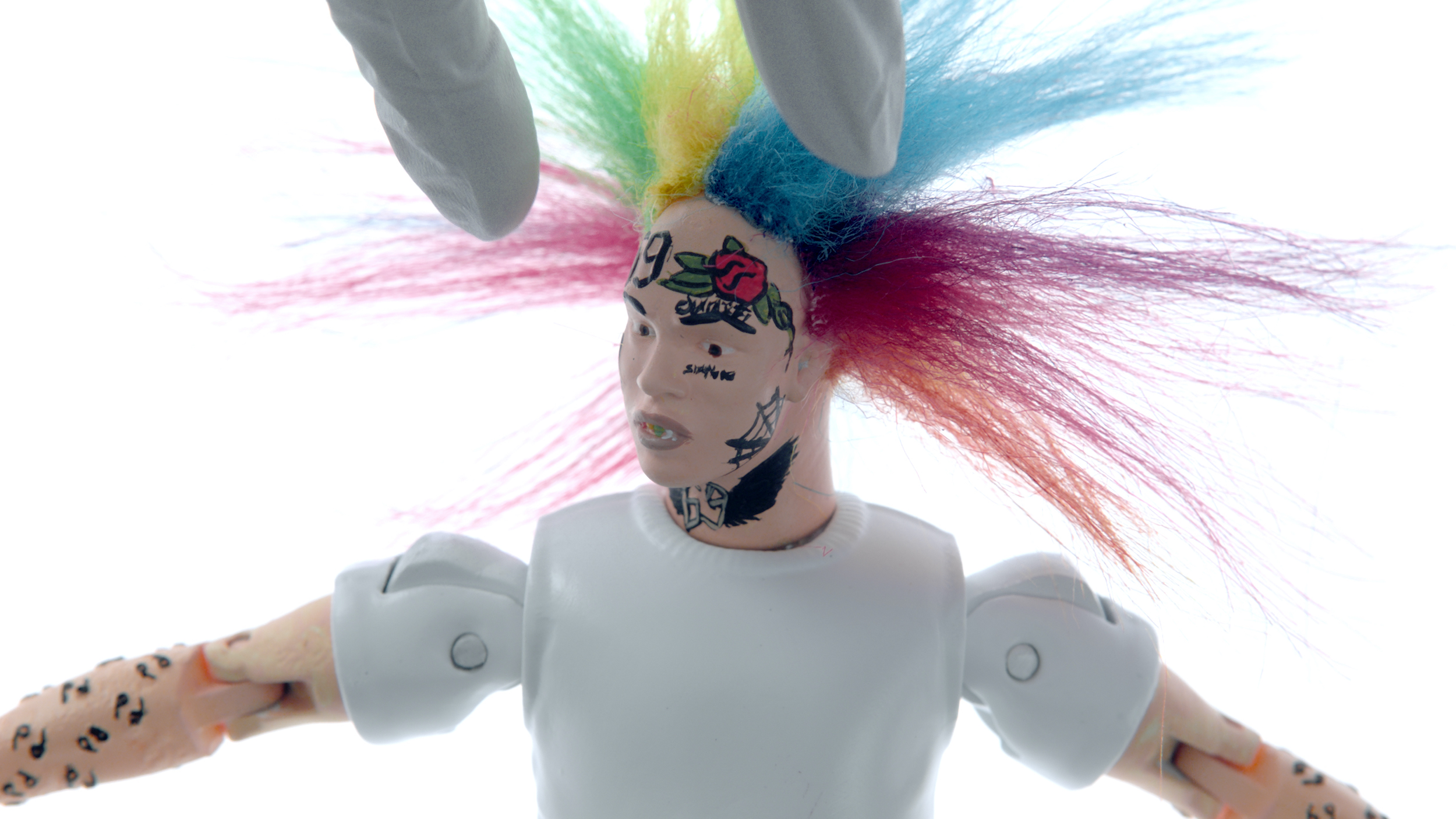 “You can’t tell who these people are. There’s an anonymity that plays into the story as well. If we’re all players in the society of making these supervillains, there’s many of these hands and lab technicians and scientists. Nobody’s taking direct responsibility,” Fong said. “The idea is that it’s more unsettling to have these very controlled hands that then eventually kind of freak out at the end and don’t know what to do. They start very sure and at the end are backing away from what they’ve made.”

Another design choice that didn’t stray too far from the source was the Tekashi figure’s rainbow hair. Aside from being a fairly accurate representation of the hairstyle and a color palette inspiration, the team got to use remnants from actual Troll dolls. (Not only does the double meaning of “troll” fit Tekashi’s persona perfectly, “Supervillain” includes footage from a birthday with a life-sized version of a few of the “Trolls” movie characters.)

“Karam really wanted Troll hair on the doll. Super Gluing it to the bald head and to try to style it in a way that’s both Troll-ish but also looks like Tekashi was just one of the adventures we had in this whole saga,” Fong said. “The guy’s got a strong brand and we totally exploited that, from the rainbow test tubes to the powders to his puffer jacket. It’s wonderful to work with this kind of candy-colored, ‘Skittles gone mad’ aesthetic. The brightness, to me, almost makes the whole thing seem more dark.”

Even in the portions that blend the physical model with digital elements, there’s still a recognizable weight to all of the component parts that are shown on screen. Fong wanted to disguise those transition points, not just to create a more seamless viewing experience, but to further mirror the idea that with the main subject of “Supervillain,” it’s nearly impossible to separate the idea of Tekashi 6ix9ine from the man who gave that character life.

“What’s interesting is that the whole story is such a mix between the analog and the real person in the digital world,” Fong said. “That’s something that is very much of our age. Real life persona versus digital persona versus social media persona: where do they start and end? People are these hybrid personas now, and I feel like, aesthetically, our methods of filmmaking are kind of embracing that, too.”

“Supervillain: The Making of Tekashi 6ix9ine” is now available to stream in its entirety via Showtime and Showtime Anytime.
Click to expand...

news ‘The Mosquito Coast’: How the Camera Became an Essential Part of Justin Theroux’s Perilous Journey