Stream of the Day: Why ‘The Florida Project’ Has a Perfect Ending

Staff Member
With readers turning to their home viewing options more than ever, this daily feature provides one new movie each day worth checking out on a major streaming platform.

Few movie endings over the last several years have proven to be as divisive as “The Florida Project,” Sean Baker’s 2017 drama about a single mother and her young daughter living in a Florida budget motel on the outskirts of Walt Disney World. The film, now streaming on Netflix, world-premiered to universal acclaim at Directors’ Fortnight in Cannes, but even admirers of Baker’s slice-of-life vision have found the film’s last one minute sequence to be tough to swallow. Baker makes such a jarring filmmaking shift that it’s hard to enjoy “The Florida Project” finale, and yet it’s without a doubt one of the most perfect and most fitting movie endings in recent memory.

“The Florida Project” stars Brooklynn Prince as Moonee, a six-year-old whose big imagination shields her from the grim realities of her poverty-stricken life. The key to what makes the film’s ending so brilliant is the perspective from which Baker not only tells his story, but visualizes it as well. To watch “The Florida Project” is to view the world through a child’s eyes in all its big, beautiful glory.

Working with cinematographer Alexis Zabe, Baker turns Moonee’s desolate Florida surroundings into a candy-colored playground. Her budget motel is a neon pink kingdom, made all the more humungous as the camera is often at Moonee’s height. The vibrant blue sky looms large, the clouds as white and robust as the opening of a “Toy Story” movie. The grass is a florescent green. The shops on Moonee’s block seem to emerge from the ground like storybook pop-ups. A row of abandoned homes are filmed to look like oversized pastel dollhouses. The handheld camera maintains a real-world intimacy that becomes fantastical when filtered through Moonee’s perspective. This is the only world Moonee has ever known, and she chooses to see endless beauty and wonder wherever she looks.

The polarizing ending arrives when the Florida Department of Children and Families (DCF) shows up at the motel to take Moonee away from her mother (Bria Vinaite), who has been using their room to solicit sex for money in order to support her daughter. Moonee runs to the neighboring motel to say goodbye to her best friend Jaycee, but she breaks down in tears at the doorstep and struggles to find the words. Jaycee grabs Moonee’s hand and in the blink of an eye Baker switches from 35mm film to digital. Using an iPhone 6S Plus camera, he tracks the two friends as they flee the motel and escape into Walt Disney World. Moonee and Jaycee sprint towards the Magic Kingdom and the scene cuts to black.

Baker’s sudden pivot to digital and a hardened, guerilla style of filmmaking is a radical move, and it’s made all the more jarring by an overpowering orchestral score that has been invisible from the soundtrack up until the moment Jaycee grabs Moonee’s hand. This final minute feels so out of place stylistically and ends so suddenly that it has a jarring effect. At the same time, Baker’s ending is not necessarily a radical one, given that he’s devoted every second of the last 105 minutes to telling this story through Moonee’s perspective.

Once the DCF arrive to take her away, Moonee’s fight-or-flight impulses take over. The world is no longer her playground. The reality of her dire situation can no longer be ignored. Or can it? The tonal jump shows how Moonee’s imagination saved her from an inevitable harsh reality, so much so that she writes her own fairytale ending. Her prince is Jaycee, and she’s whisked away from danger and taken to refuge in a magical kingdom. The fantasy of the moment and how it contrasts with the rawness and impulsiveness with which it is presented creates a gut punch to the heart. 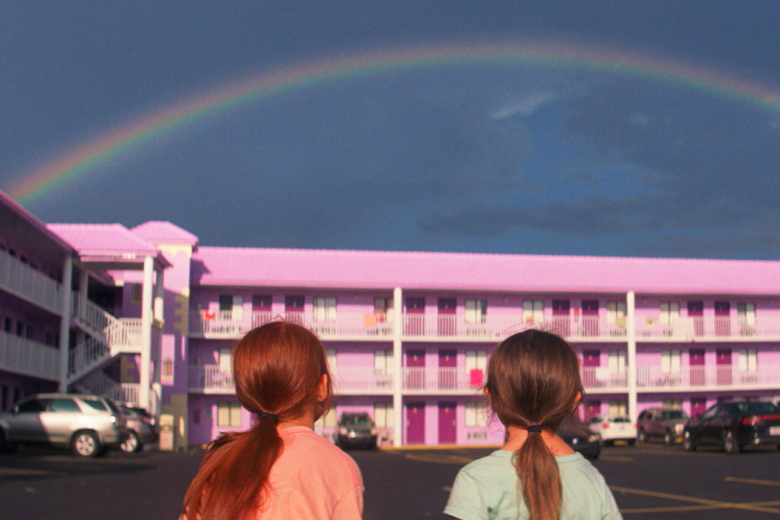 “We’ve been watching Moonee use her imagination and wonderment throughout the entire film to make the best of the situation she’s in,” Baker said of the ending in 2017. “She can’t go to Disney’s Animal Kingdom, so she goes to the ‘safari’ behind the motel and looks at cows; she goes to the abandoned condos because she can’t go to the Haunted Mansion. And in the end, with this inevitable drama, this is me saying to the audience, if you want a happy ending, you’re gonna have to go to that headspace of a kid because, here, that’s the only way to achieve it.”

“The Florida Project” is far from the only movie to end by creating a “what if” fantasy for its protagonist. Bong Joon Ho used the format just last year in “Parasite” (now streaming Hulu), which visualizes Ki-woo’s plan to earn enough money to free his father. In “Mommy” (now streaming on The Criterion Channel), Xavier Dolan creates a stirring montage set to Ludovico Einaudi’s “Experience” that the viewer discovers only in retrospect to be the character dreaming of what her son’s life could have been and not the actual reality of her troubled son getting better. Both filmmakers cut to the present to reveal these sequences are just mournful “fake outs,” but the power of Baker’s “Florida Project” ending is that it robs the viewer of such a return. The film ends in fantasy because Moonee no longer has a reality that’s safe. It’s a painful truth, and a perfect one.