‘Star Trek: Picard’ Review: Episode 3, After a Sluggish Start, Is Finally ‘The End of the Beginning’

Staff Member
We are earthbound no more! Well, by the end this third episode of “Star Trek: Picard,” anyway. But throughout much of it, especially once Santiago Cabrera’s compelling new character, Rios, was introduced, it felt like this show was finally about to achieve warp velocity. And at the end, when Jean-Luc uttered his immortal catchphrase “Engage,” it felt like “Picard” had done just that.

There were still a few bumps in the road getting there, though.

“The End of the Beginning” opened with a flashback 14 years earlier right after the synths had destroyed the Utopia Planitia shipyard and left Mars in flames. Picard has a pivotal meeting with a shaken Starfleet Command — they apparently, fearing for their greatly depleted resources after the attack, were so committed to calling off the rescue armada they had been going to send to Romulus that they were even willing to accept Picard’s resignation instead. The devastating news of the sudden end to his Starfleet career is teased out slowly in Picard’s conversation with Raffi (Michelle Hurd), clearly a senior Starfleet officer at this time herself. We’re still not certain of exactly their relationship? Was she his new XO after Riker left to command the Titan at the end of “Star Trek: Nemesis”? There’s a lot of familiarity there in the way she keeps calling him “JL.”

“I never believed Starfleet would give into intolerance and fear,” Picard says. Sigh. Wonder what present-day institutions this could be allegorizing here? “Star Trek” has never been one for subtlety, but this moment in 2020 doesn’t really call for subtlety.

Raffi thinks this isn’t all Starfleet’s doing. She suggests an at-first-glance ridiculous theory: that for some reason the Romulan Tal’Shiar had been involved in sabotaging the rescue fleet designed to save their species. Picard is rightly skeptical. Why would they possibly do something so self-defeating? 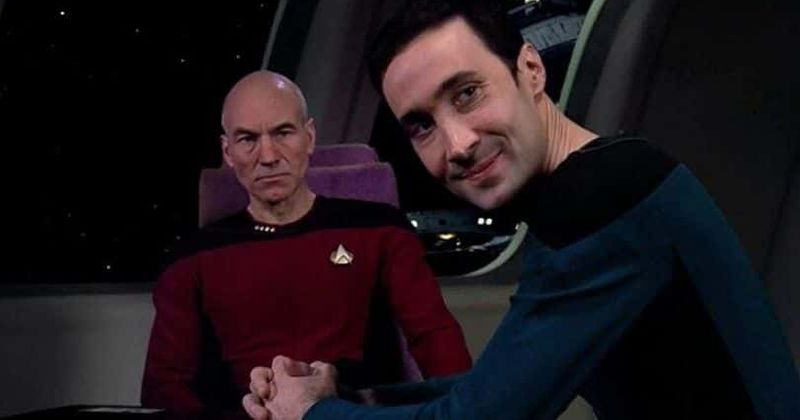 “How to Telegraph Villainy: An Actor’s Guide” — Of course, Bruce Maddox (Brian Brophy), last seen onscreen in “Next Gen” in February 1989, was supposed to have ultimately become a good guy.

Skip ahead to the present. Jean-Luc is trying to recruit Raffi to find him an off-the-books starship and pilot to take him to wherever Bruce Maddox, the guy he thinks created Data’s daughter Soji, might be. (Maddox having been the robotics expert who previously wanted to disassemble Data in the classic “Next Gen” ep “The Measure of a Man,” before eventually becoming his friend.) Raffi is pissed. Not even Jean-Luc’s anti-Starfleet screed on TV (or whatever you call the 24th Century version of TV) made her happy. Here she is out in the American West, alone in the desert, still struggling with her addiction issues and completely forgotten by Starfleet, while at least the public at large still cares about Picard’s opinion, which he’s happy to share while surrounded by the luxurious “oak beams and heirloom furniture” in his chateau. Not mentioned here is why it seems that Jean-Luc is one of the “haves” and Raffi is one of the “have nots” in a Federation economy that’s always made a point of eliminating money altogether. (She also seems to be hanging out in the exact same place where they filmed that awful final showdown in “Star Trek: Generations” where Captain Kirk is crushed to death by a bridge.)

Anyway, Picard says to Raffi that she may have been right all along about a plot spearheaded by both the Romulans and Starfleet insiders to sabotage the rescue fleet. It sounds crazy… but then remember in “Star Trek VI: The Undiscovered Country” there were Klingons, including Klingon Christopher Plummer, who were trying to sabotage the Federation’s attempts at rescuing them too.

Back on the Borg Cube, we meet the director of this whole project to rescue some drones and use their technology for whatever purpose the Romulans want: Hugh! The drone Capt. Picard liberated long ago, played with a casual, nobody’s fool attitude by the returning Jonathan Del Arco. He knows the Romulans view these liberated drones as both a “threat” and “assets to be warehoused” and why exactly he’s playing along remains unclear. “I hate it,” Soji says about the service they’re expected to render their Romulan masters.

But oddly enough, most of the liberated drones Soji is helping rehabilitate are, in fact, Romulans. One particularly catches her interest: Ramdha (Rebecca Wisocky), a former anthropologist who specialized in what humans might call mythology but that Ramdha finds so eternally present and urgent she calls “news.” And one such story is about “The Destroyer.” 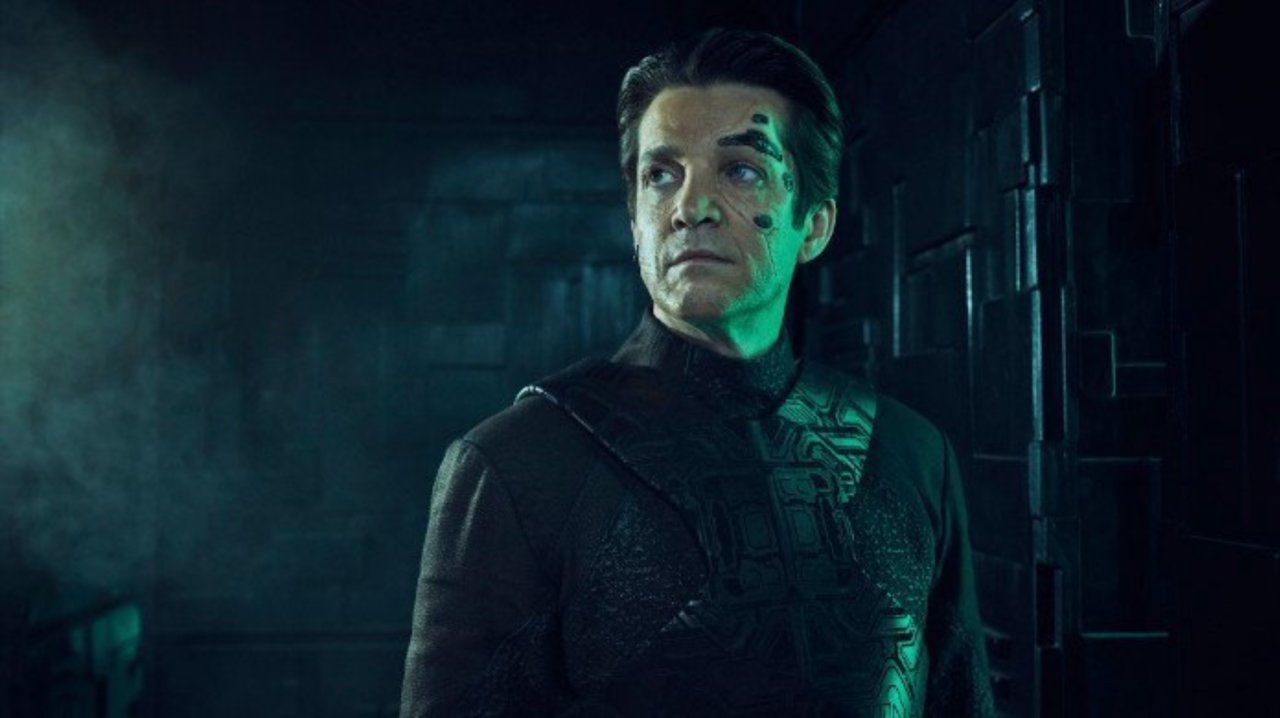 Hugh (Jonathan Del Arco) is significantly de-Borgified compared to when we last saw him onscreen 26-and-a-half years ago.

At long last, Raffi gets over her anger and puts Picard in touch with a potential pilot: Rios, former XO of the heavy cruiser U.S.S. Ibn Majid, named after the legendary 15th Century Arabian sailor and navigator. Rios is the perfect addition to this group of misfits Picard is assembling: an ex-Starfleet officer who flies around the galaxy on his own ship doing “off the books” jobs, with only a crew of holograms that look exactly like him for company. How funny that this guy is just constantly surrounded by versions of himself? The two we meet — an EMH (emergency medical hologram, like Robert Picardo’s “Doctor” on “Star Trek: Voyager”) and an ENH (emergency navigation hologram) seem to have slightly different accents and personalities (a lot more nerdy and earnest than Rios himself), just to keep their captain on his toes. The real, flesh-and-blood Rios has been injured — “I didn’t die” is his only explanation — wants to leave the scar, and chomps down on a cigar. This guy already has more life and personality than all of the other new characters on this show combined. And he has an intriguing past: apparently, his ship, the Ibn Majid, endured some kind of calamity — and a secret one too. Any record that that ship ever existed has been scrubbed from Starfleet’s datafiles. He’s resistant to Picard, because he “already had one grand, heroic captain” in his life and saw that person die in front of him. Spoken like a romantic trying to come off as a cynic. Classic.

But no, the adventure doesn’t actually begin there. If these first three episodes form a kind of prologue to whatever mission lays ahead they should be given a cumulative name: “The Long Goodbye.” Because before setting off for the stars we still have to check back in at the chateau one last time for Picard to do some packing — haven’t all these episodes really just been about him packing? — and say goodbye to his Romulan caretakers. But of course, the Zhat Vash shows up, and not to sample the 2386 vintage. Picard’s caretakers quickly dispatch them, with the final baddie felled by none other than Dr. Jurati (Alison Pill) the quirky Daystrom Institute scientist might be able to help them use Soji to revive Data. She realized she had to join Picard on his quest too after the mysterious Vulcan head of Starfleet Intelligence, Commodore Oh, in league with the killer Romulans herself, showed up on Okinawa to pump her for information and issue some not so veiled threats. (When did Vulcans start wearing sunglasses, by the way?)

Turns out, the one Romulan assassin left alive at the chateau has a warning for Picard and his merry band of misfits himself: Soji may not be what she says she is. She could be “The Destroyer,” the legendary figure from Romulan myth who Ramdha mentioned earlier. Cut back to the Borg Cube, and Ramdha suddenly freaks and starts calling “Soji” the Destroyer herself. Two-factor authentication!

Picard & Co. had better hit the starlanes asap to save Soji, because it seems everyone but her knows who she is. And, thank the Prophets, they do at last – Jurati, Picard, and Raffi all beaming aboard Rios’s ship to get this mission under way. Rios declares that his services are expensive (What does he want to be paid in in this money-free society? Latinum?), but away they go, with Picard getting to say his immortal line: “Engage.”

My question last week was, “When will this show start?” Well, it’s finally started at the end of Episode 3. My question now has to be: What is this show? A spy drama? A talky chamber piece? A character drama in which every character just flat out states in dialogue what’s wrong with them? To quote another legendary “Trek” character: curious.