I’m going to let you in on a little secret of the trade: Film critics actually want to love everything they watch. The odds may not always be in our favor, and certain assignments inspire lower expectations than others, but nobody shows up for work hoping to be miserable that day — least of all when they’re lucky enough to work a job that offers an occasional measure of outright transcendence.

Which is all to say that, one of these days, I would be absolutely overjoyed to rave about one of the glossy, star-studded, and/or special effects-driven original movies that Netflix releases onto its platform without any marketing or festival play whatsoever as part of the streamer’s pact with the dark lord Satan to flood the zone with cinema-flavored content (last summer’s “Hustle” is almost strong enough to feel like the exception that proves the rule). And while Francis Lawrence’s “Slumberland” is a slight cut above the likes of “The Gray Man,” “Mr. Harrigan’s Phone,” and “The School for Good and Evil,” I’m afraid that today is not going to be that day.

Broadly inspired by Winsor McCay’s 1920s comic strip “Little Nemo in Slumberland” — and yet so obviously unfolding like a mishmash between “Alice in Wonderland” and “Inception” that you can almost hear Lawrence pitching it to Netflix in those exact words — “Slumberland” is a sleep-oriented storybook of a movie that’s as confusing and forgettable as an actual dream, and several hundred times as long.

Swapping out the young boy hero of McCay’s comic strip for an 11-year-old girl with the same name (the plucky, winsome Marlow Barkley), and replacing the non-linear nature of Nemo’s adventures with a now standard-issue YA narrative about a child learning to cope with the loss of a parent, “Slumberland” begins with its best foot forward. Everything about Nemo’s life seems like the stuff of a fairy tale: She and her lighthouse operator single dad (a bearded and fittingly dreamy Kyle Chandler) live on an adorable one-house island somewhere in the Pacific Northwest, a place so isolated, twee, and saturated with candy store colors that it basically suggests what Moonrise Kingdom might look like if it were gentrified by Willy Wonka.

“What is a lighthouse for?,” Nemo’s father asks her at the end of the whirlwind montage that’s somehow meant to provide the emotional bedrock for the unmoored spectacle to come. It’s the kind of question that begs a poetically heart-tugging answer, but Nemo’s father drowns amid a blue squall of murky CGI before his daughter can figure it out for herself.

The next thing the newly orphaned Nemo knows, she’s living on the mainland with her awkward yuppie uncle Phillip (Chris O’Dowd), who’s the opposite of his late brother in every way. Instead of a rugged outdoorsman who lives off the grid and inspires his daughter to follow her imagination, Phillip is a dry as chalk doorknob salesman who lives in a Toronto high-rise and doesn’t like to step even a foot out of place. He’s not a bad guy by any means, just a joyless one; O’Dowd always makes for a likable downer, and his glum deadpan provides all of this movie’s funniest moments (e.g. the bit where he’s introduced while taking a work call at his sibling’s funeral and casually explaining to the person on the other end of the line that “my brother was lost at sea.” He also owns a series of hardbound books called “Extraordinary Knobs,” which turn into a clever running gag).

Lucky for Nemo, she can still see her dad in her dreams. There’s only one problem: He isn’t in them. Instead, the unconscious girl is greeted by a smelly giant scoundrel named Flip (a very game Jason Momoa), who appears to be the misbegotten lovechild between Slash from Guns N’ Roses and Tumnus from The Chronicles of N’arnia, complete with a pair of pointy fawn ears and a purple top hat that accommodates his two giant horns (did I mention that he also has two giant horns?).

Amusingly introducing himself as “a troubling mix of father-figure and pent-up masculinity,” Flip is obsessed with eluding the Dream Cops from the Bureau and collecting magic pearls from The Sea of Nightmares that will grant him his greatest wish, which is… uh…to win a Johnny Depp lookalike contest? To exact revenge on screenwriters David Guion and Michael Handelman for giving him so little to work with? To escape the Best Buy TV demo reel that he’s been stuck inside since the night he fell so deeply into Slumberland that he forgot who he is in the waking world? The details are frustratingly unclear, even if the character makes good on this movie’s “Inception” lineage by constantly explaining the convoluted rules of his colorful dream world. 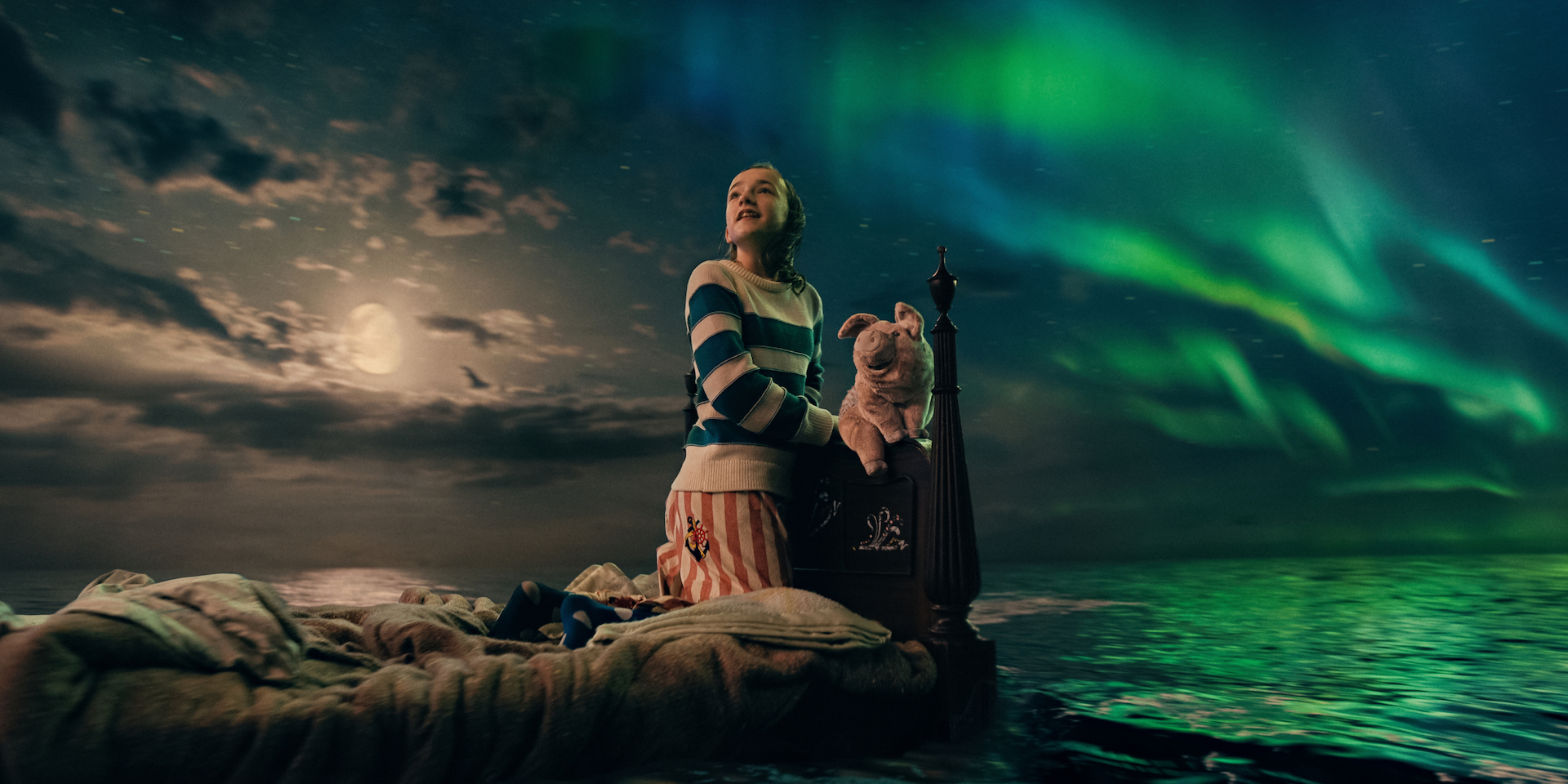 The basics of Slumberland are easy enough to understand: Flip has a key that allows him and Nemo to move through other people’s dreams, meaning that each of the movie’s CGI-heavy cornucopias are unconscious expressions of a random character our heroes meet between one door and the next. Agent Green (Weruche Opia) of the Dream Police chases them through a hotel ballroom where butterfly people are taking a salsa class because that happens to be what’s going on in one of the dancer’s sleeping minds. A fight scene of sorts takes place in a mirrored bathroom that feels like an unused set from the last “John Wick” movie, while a chase scene leads Flip and Nemo to hitch a ride from a little kid with a rockabilly pompadour who’s driving a big-rig truck through an empty city of color-coded blocks, because that’s what a 10-year-old might dream about.

That might sound fun, but the action is so unmoored from any real emotional stakes that even the most exciting setpieces and cleverest visual gags — including a room that folds into an elevator — feel like empty stimuli. Similarly, the dreamscapes of Slumberland might look much crisper and less garish than most of the CGI-heavy kids movies that Hollywood has made from the paints left over from Tim Burton’s hell palette, but the visuals are too uniform and plastic to reflect the possibility of even one person’s dreams, let alone the Jungian network that supposedly links our collective unconscious together. Lawrence’s film reflects the lushness of McCay’s drawings, but not their hand-drawn splendor.

In fact, viewers are liable to forget that any of these green screen environments are supposed to reflect the neuronal fireworks inside someone’s head, as opposed to wrinkles in time or folds in the multiverse. For all of the non-stop metaphorical blathering about dreams and nightmares, only a small handful of moments effectively seize on the unique properties of this movie’s premise; the brief sequence in which we get to see who the various dream hosts really are in real life is so delightful that it makes everything around it feel like a missed opportunity.

And “Slumberland” is nothing if not an exhausting roller-coaster of missed opportunities, virtually all of which stem from the film’s lack of a solid emotional foundation. There are some poignant turns in the story — the lighthouse question is answered rather beautifully for something that hangs in the air for two full hours — but the waking and dreaming worlds are too disconnected from each other for the actions on one side to resonate across the other, and even the yeoman’s work that O’Dowd does to help bridge them together can’t stretch over the gap.

A lighthouse does prove to be a lovely metaphor for parenthood, but little else in “Slumberland” proves to be anything for anything. It’s just another night spent dreaming that Netflix will do better next time.

news ‘The Sandman’ Renewed for Season 2 at Netflix