Hulk stories have never been the Marvel Cinematic Universe’s forte, so “She-Hulk: Attorney at Law” has its work cut out for it.

The latest Marvel Disney+ series follows practicing lawyer Jennifer Walters (Tatiana Maslany) who acquires superpowers after a car accident and ends up living and working as a hulk. Created by “Rick and Morty” writer Jessica Gao and directed by “Marry Me”s Kat Coiro, the nine-episode series is baseline enjoyable with an adventure-of-the-week structure, but doesn’t meet the potential of a captivating cast, talented writers, and the might of the MCU.

In the comics, Jen receives a life-saving blood transfusion from cousin Bruce Banner (Mark Ruffalo), but the show makes things both simpler and more dull: His blood drips into her open wounds after the crash, and she transforms — but with coordination and control well beyond Bruce’s best days as a Hulk, even after 15 years.

“I’m better than you?” Jen asks when he tells her that her blood actually healed his wounds. Bruce bristles, but the short answer is yes. She can even control if and when she changes into Hulk form, and in no time at all she’s heading back to life as a lawyer, tapped to head a superhuman law division and represent Emil Blonsky (Tim Roth), the man who turned into Abomination in “The Incredible Hulk” and tried to kill Bruce.

The aspirational tone of “She-Hulk” is comedic legal procedural with a superhero twist, but any lawyer would tell you it’s hard to uphold something with no precedent. As the first show of its kind, “She-Hulk” gets to build and break the rules of its universe — like “WandaVision” or the non-MCU masterclass of “Kevin Can F*** Himself” — but it does not feel nearly as confident, focused, or purposeful. There are a handful of promising bits, from Jen’s obsession with Steve Rogers’ sex life to how Wong spends his free time to an truly insane Episode 2 cameo — all of which are amusing, but are either taken too far or not far enough, and thereby ultimately missing the sweet spot (an ongoing joke about Blonsky’s pen pal “soulmates” oddly works). Tongue-in-cheek references to Hulk’s inconsistencies and other MCU moments fall flat alongside shameless peddling of Pixar, Hulu, and other Disney properties.

The “She-Hulk” team doesn’t lack for comedy writing talent (with alums from “Robot Chicken,” “On My Block,” “Santa Clarita Diet,” and actual She-Hulk comics), but the show still searches for its voice, bogged down by larger tasks of fitting into the Marvel Cinematic Universe, developing Phase 4, and establishing this character in a world teeming with superheroes. In the four episodes screened for critics, there’s no hint of where “She-Hulk” is heading. Jameela Jamil’s Titania and Renée Elise Goldsberry’s Amelia both get exactly one scene each, and Charlie Cox’s Daredevil is nowhere to be seen. Jen orders the audience directly to “not forget whose show this really is,” but Blonsky, Banner, and Wong dominate early episodes, the latter two undoubtedly benefiting from established characters, performances, and voice. Blonsky’s trial does not end up being the central conflict, nor is Jen’s struggle to live as a hulk or what appears to be a plot to steal her blood. The Sacarrian Class A aircraft that causes Jen and Bruce’s car crash has yet to be explained, though that may have something to do with the premiere being a recut version of Episode 8. Jen is adamant about not wanting to save the world, so something has to change her mind — but that something has ostensibly not happened yet.

Despite all that, the cast charms, with Maslany at ease in the lead. She’s a natural fit with any costar, particularly Ruffalo, nailing everything from Jen’s sweet impudence to her command of a courtroom. Jen and Bruce tease each other like siblings, and though he quickly exits the show, their relationship carries the pilot. Benedict Wong continues to steal every scene as Wong, now established across multiple films as impeccable comedic relief that never undermines his powers, sorcery, or status. Ginger Gonzaga and Josh Segarra make an impression in early episodes as Jen’s best friend/paralegal and a fellow lawyer at her new firm, with Gonzaga quick to nail romcom-bestie energy and Segarra as wholesome and endearing as he is on “The Other Two,” now with legal expertise to boot. 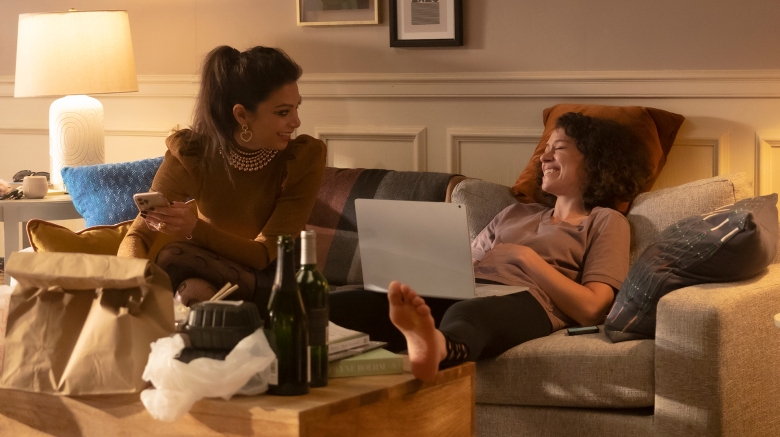 Ginger Gonzaga and Tatiana Maslany in “She-Hulk: Attorney at Law”

The “She-Hulk” trailer CGI prompted backlash from viewers, and while it has notably improved (and the team has spoken up for VFX artists), it’s still distracting. Ruffalo’s Smart-Hulk was hardly ever photorealistic, but he was part of a massive ensemble in “Endgame” that included multiple CGI aliens. “She-Hulk” sticks out in the everyday office, bar, and household settings, not because of her size and shape, but because she simply doesn’t match the fabric of her surrounding reality.

Gao, Coiro, and Maslany have all spoken about how “She-Hulk” explores societal perceptions of women and their bodies, and it’s clear that they’ve put thought into every way that manifests in Jen’s life. Her Hulk form is taller and curvier with a perpetual blowout. She gets more matches on dating apps than Jen does and when she does go on dates, the men are awed rather than intimidated. Other than a comment about the lack of clothing options for her size, being a Hulk seems to only benefit Jen in early episodes, including the ability to completely demolish a group of men who try to attack her.

When Bruce tells Jen to control her anger in Episode 1, she all but laughs in his face. Her entire existence is an exercise in moderating emotions, she says, from being catcalled and mansplained to being taken seriously at work. It’s a clever subversion of Bruce’s own “I’m always angry” from “The Avengers”; Jen is such a pro at what took him years to master that she doesn’t even need to say it. “She-Hulk” isn’t yet incredible, but it excels at taking something known and dismantling it, with five episodes left to reveal its true power.

news How ‘She-Hulk’ Taught the Online Trolls a Lesson

news Tatiana Maslany Fires Back at ‘Reductive’ Strong Female Lead Trope: ‘As If We’re Supposed to Be Grateful’