From Pawnee City Hall to the bowels of Lumon Industries, Adam Scott’s acting career has revolved around the American workplace.

“I’m still sort of absorbing it, the shock of it,” Scott told IndieWire over the phone less than two hours after nominations were announced. “I was not expecting it and couldn’t be more pleasantly and delightfully surprised — that sounds a little whimsical, but I am really just so, so happy for the show and Dan and Patricia and John and Chris — all the actors because they all made this show what it is, everybody that was nominated and the show as a whole.”

Scott says it was director Ben Stiller who was “interested in the idea of the workplace comedy and turning it on its head a little bit.” Their professional history — including Stiller’s 2013 adaptation of “The Secret Life of Walter Mitty” — lent itself to the partnership, as did Scott’s own resume, but “Severance” challenged the actor in unexpected ways.

“When I’m working, a lot of time I have this protective eye I keep on myself, an eye on my performance in a way to try and protect myself,” Scott said. “You never know what they’re going to use or not use, and so you try and keep yourself from doing something that is not good. With Ben, I realized early on when we were making the show that I was just going to need to surrender all of that and depend on him completely. I wasn’t gonna be able to finish the job unless I went completely underwater with it. I needed to let him be that eye on the performance, and Aoife McArdle, who directed three of the episodes. It’s just a full trust that I have in Ben, which is why I felt safe doing that and I’m so glad I did. There would have been a distance in the performance if I tried to keep an eye on it. It was a much more satisfying experience having surrendered any of that.”

Scott made that call because of the workload; not only is he in a large number of scenes, but as the rare character depicted both in and outside of Lumon (along with Patricia Arquette’s).

“The duality of it was super interesting and a really fun opportunity to be able to play a range,” he said. “When we were trying to game out how to play those two different sides of the character — the Innie versus the Outtie — what Dan and Ben and I landed on was that it should feel like the same guy. One of them has that 40 odd years of life experience of sorrow and joy and all of the stuff that goes into this full life, and then the other one is for all intents and purposes, like two-and-a-half years old. It became like this math problem between the two.”

“Since we were shooting the season all at once, sometimes we’d be doing an Innie scene from Episode 2 in the morning and then Outie scene from Episode 8 in the afternoon,” he continued. “Sometimes jumping back and forth became this addition or subtraction of life experience in a way, and how that manifests physically. It all began and ended with the internal shift that we had to make between the two.” 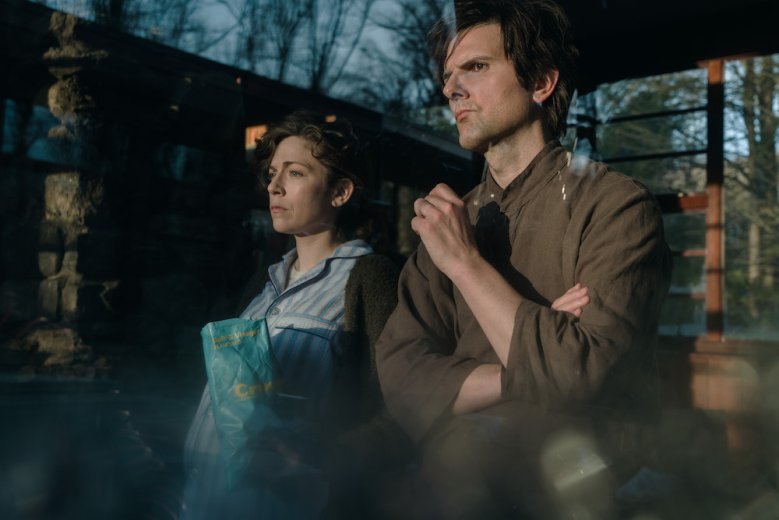 Scott wanted to be part of “Severance” “more than I’d ever wanted to do something,” but like Erickson, he was blown away by its popularity.

“While were making it, if not every day then every few days we would all kind of stop and look at each other and just marvel at how weird this all was,” he said. “‘Who… what is… what are we do — this is insane. Who is going to watch this?’ But taking a big swing is the not knowing. That’s the fun of it, is all of us joining hands and jumping off the cliff together in a way, because if there was a set formula that you knew people were going to connect to and enjoy, it would be maybe less interesting.”

As for why it resonated so strongly with audiences, Scott is right that there’s no formula — but he’s glad that quality work is being recognized and finding audiences when they most need it.

“It’s beautifully written and it looks incredible,” he said. “The show has this really unique look and feeling to it. There’s also a cultural moment that was happening that was unintended, that people were reevaluating their relationships with their jobs or the work they do. That that really connected on a level that wasn’t anticipated at all, but Dan created a group of really interesting characters, and the ensemble really brought them to life in a lovely, cool away.”

In addition to glowing reviews and award nominations, “Severance” also spawned a mighty fan base with sprawling theories, reddit threads, memes, and more.

“I remember around the finale, Ben and I on the phone just saying, ‘This is so weird! Two months ago, nobody gave a shit,'” Scott said. “Now if we’re ever discussing anything having to do with the show we have to be really, really careful because now people care. It’s just so strange to have something that we were in a bubble making for so long, and then suddenly it feels like a lot of people are invested in it and care about it. It’s really wonderful. I think it’s incredible and super cool, because I’m one of those people — this is exactly the kind of show I gravitate towards and love as a fan, so I get it.”

Though he can’t breathe a word about Season 2, the actor still has high hopes for Mark S.

“My dream is that Mark is able to get a goat,” he said. “A baby goat of his very own, and live happily ever after somewhere super comfy.”

Our theory? Probably not.

To keep updated with IndieWire’s coverage throughout Phase 2 of Emmy season, click here to sign up for our awards season and TV e-mail newsletters, as well as breaking news alerts.
Click to expand...