Marvel’s first “Black Panther” movie was a cultural and commercial phenomenon, grossing well over a billion dollars worldwide and earning three Academy Awards, including one for the costume designs of Ruth Carter, who’d been previously nominated for her work on Spike Lee’s “Malcolm X” and Steven Spielberg’s “Amistad.” For the sequel “Wakanda Forever,” Carter had to retain the satisfactions of the original “Black Panther” without simply repeating herself — all while knowing that the expectations would be stratospheric.

“We wanted to keep Wakanda intact,” she told IndieWire, “but just like any other big superhero film, you enhance it, you upgrade.” Characters like the Dora Milaje, the Wakandan special forces team made up entirely of women, were given new armor to increase their sense of power and menace, while Lupita Nyong’o’s character Nakia received a new submersible suit for an underwater rescue sequence.

That underwater component was both an opportunity for Carter to expand the “Black Panther” universe and her biggest challenge. In “Wakanda Forever,” the people of Wakanda find themselves in contact with Namor (Tenoch Huerta) and the undersea kingdom he rules, Talokan. Carter discovered that many of the original “Black Panther” costumes wouldn’t work in the new setting. “There was a lot of fighting in water, so we were not able to use most of the costumes from the first movie,” she said. “We had to start from scratch because the Dora costumes were made from leather and beads, so we remade them with silicone rubber basically.”

The costumes of the mountain-dwelling Jabari tribe also had to be rethought, since no one knew how their fur would react underwater. “We had to test that costume in a 20-foot tank to see what the hell this fur was going to do in the water,” Carter said. “We had to go with all kinds of synthetic fur and dip it in water — sometimes just a glass of water to see how it would respond. It was a huge task to figure that one out.”

For the warriors of Talokan, Carter had the freedom to create new designs, which were heavily influenced by Mayan culture and history as well as Carter’s research with marine experts who helped her incorporate deep-sea elements into the Talokan looks. For Namor, Carter made a kelp headress and added a variety of shells and beads to give a sense that he had traveled through time. 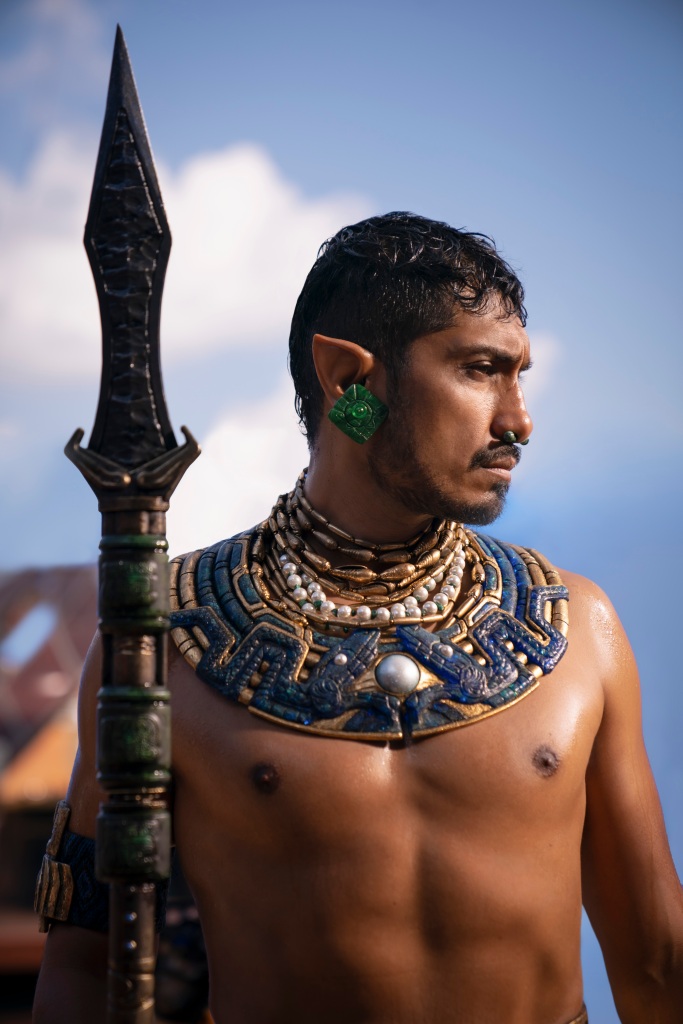 The creative and logistical challenges of “Wakanda Forever” would have been daunting under any circumstances, but the COVID-19 pandemic added its own struggles — as did “Black Panther” star Chadwick Boseman’s death in 2020. “Our hero passed away, and then [director] Ryan Coogler became our hero,” Carter said. “He had to write a new story in the midst of grief, because Chadwick was his friend. And he was our friend and we were all stunned, but we came together as a wounded family on Zoom.” Carter found that the intimacy offered by Zoom calls was an unexpectedly positive byproduct of the pandemic. “When you see babies crawling up into the laps of the director and executives, and you see people at home and we’re having a meeting but eating our yogurt, it connects you in a way that I don’t think you connect when you have to get your presentation ready and go to the board.”

“So that helped us,” Carter continued, “and not having a script for a long time forced us to deal with the world building. We submitted lots of ideas for Namor and the Talokans — you know, hundreds of illustrations are submitted and as a team we go over everything together and decide which ones are going to be fabricated. Then everybody goes away and I’m by myself and I’ve got to make it all.”
Click to expand...

news ‘Babylon’ Goes Wide: This Is What a Smart Oscar Play Looks Like