news Oscars 2021 Producers Press Conference, What We Know About the Show

On Saturday morning, first-time Oscar producers Steven Soderbergh, Stacey Sher, and Jesse Collins gave an L.A. press conference to fill in the gaps on the looming Oscar show. Details have been coming thick and fast in the past week as plans solidified, and nominees and their guests make their travel arrangements for the two-month-delayed Academy Awards (televised live on April 25 on ABC at 8 p.m. ET/5 p.m. PT. and in more than 225 countries and territories worldwide). Oscars 2021 could not have been accomplished without the delay, the producers said, from safety concerns to increased access to vaccinations.

Their goal: to stage a zoom-less affair packed (at a safe distance) with as many live human nominees and presenters (each allowed one guest) as possible, the producers reiterated. “This is the walking definition of trying to build an airplane while it’s in the air,” said Soderbergh.

The filmmaker, who has been shooting his second film during COVID, wants viewers to feel drawn into a cinematic experience far away from the television they’ve been watching and the trapped-at-home feeling of the pandemic, from wide-angle lenses, 24 fps images, and a Questlove score, to creative over-the-shoulder camera angles of attendees reacting to the show. “I want the whole thing to announce itself out of the gate as different,” Soderbergh said. “It’s going to be wonderfully intense.”

When asked if any Zooms were permitted: “Satellite hook-up,” Soderbergh said. “We want to make it feel integrated into the overall feeling of the show.” As for masks, they “are going to play an important role in the story of this evening. If that’s cryptic, it’s meant to be. It’s a topic central to the narrative.”

Along with 15 already-announced Oscar presenters (more will be announced next week), nominees and guests are on their way to Los Angeles. Among others, Emerald Fennell, nominated for directing and writing “Promising Young Woman,” moved into a Los Angeles airbnb this week in advance of the ceremony. Glenn Close is flying into town from her home in Montana. “Another Round” writer-director Thomas Vinterberg and producers Sisse Graum and Kasper Dissing are jetting from Copenhagen to Los Angeles.

83-year-old Anthony Hopkins, however, is sticking with his home pod in Wales rather than fly to Oscar hubs in Dublin or London at BFI Southbank, as his reps apply for Oscar Zoom dispensation. There’s a good chance if he wins for “The Father” that we won’t see his acceptance speech. (Tune into Stephen Colbert on Monday night for Hopkins’ appearance, even before Oscar ballots are due.) Other U.K.-based nominees include Carey Mulligan, Daniel Kaluuya, Riz Ahmed, and Vanessa Kirby.

While the Oscars will primarily be held at the Dolby Theatre at Hollywood and Highland as well as interiors and exteriors at Union Station, where sets are now being erected 24/7, the producers are arranging 10-to-12 Oscar hubs around the world, starting in London and Paris, which will join via satellite feeds in the wee hours of April 26. An eight-hour time difference with Los Angeles marks BFI Southbank in London, which is just emerging from a three-month lockdown, and nine hours does for the Paris Canal+ studio and rooftop that will host about seven local nominees (and guests) representing Florian Zeller’s “The Father” and Darius Marder’s “Sound of Metal.” 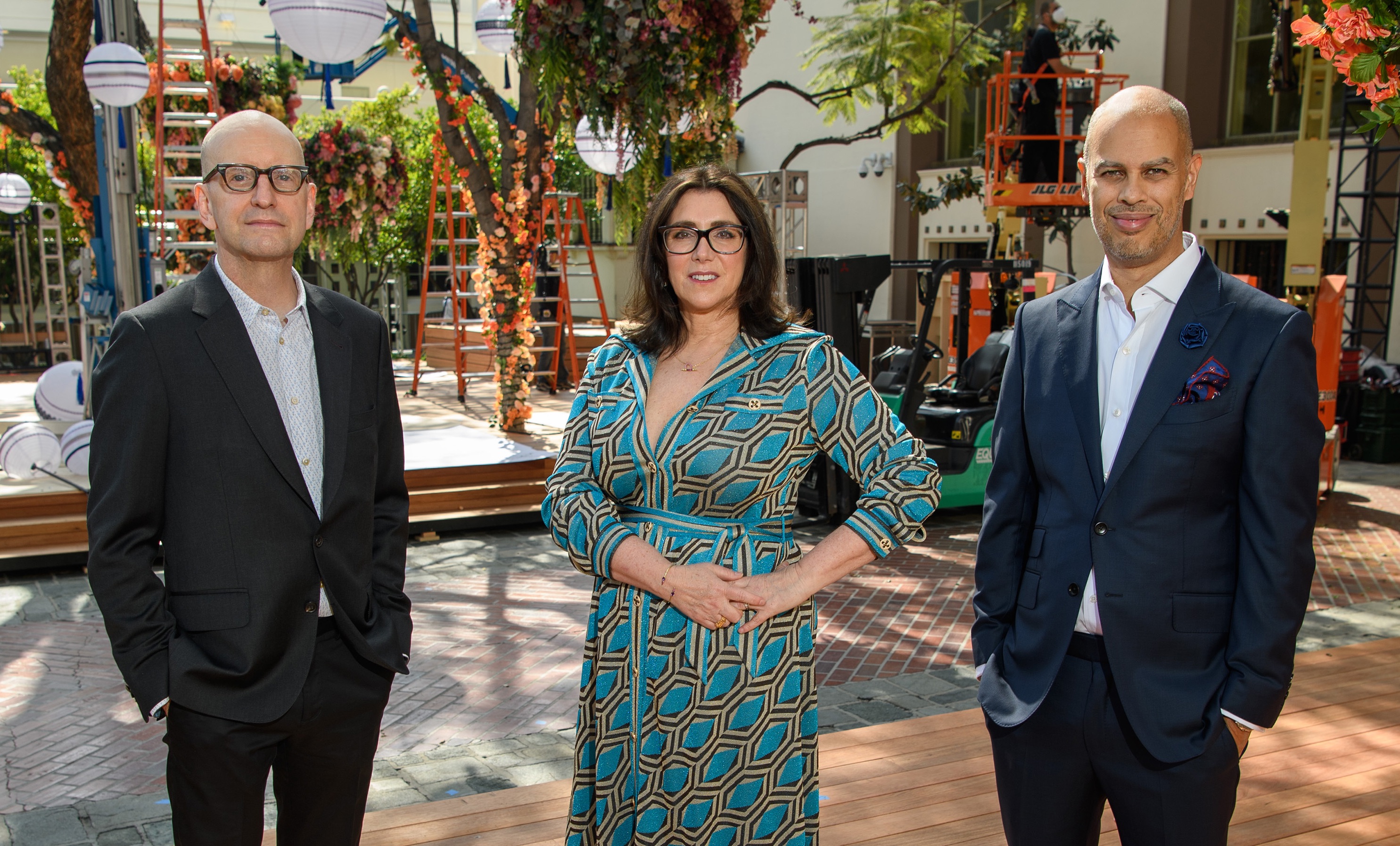 Central to the producers’ concept for the hostless show is to use “guides” to take the audience through each of the chapters of the three-hour “movie,” using pre-recorded interviews with the people in front of and behind the cameras to draw audiences into their narratives so they will have someone to root for when the winner is announced. The producers may be able to fit in montages of some of the nominees’ answers. “Movie storytelling is so unique,” said Soderbergh. “We have the resources, through the stories the nominees are telling us, to tease out the detail of what makes movies so special, why we connect to them so strongly all over the world.” Finally, he wanted the show to “feel more personal, wanted the show to have a voice.”

The live Oscars will allow audiences some access to the attendees hanging out together in two courtyard exteriors at Union Station. The plan is to move nominees and guests from space to space (with access to cocktails). But Disney chief Bob Iger will not be there, Soderbergh reminded, as Hollywood’s usual suspects are not welcome. That would have been impossible to control from safety perspective. “We’ve had a lot of practice,” he said of the safety protocols, reminding that Hollywood has shown the world “how to get people back to work safely. It’s labor intensive and logistically complex and it’s expensive. This is all part of the narrative of the evening.” 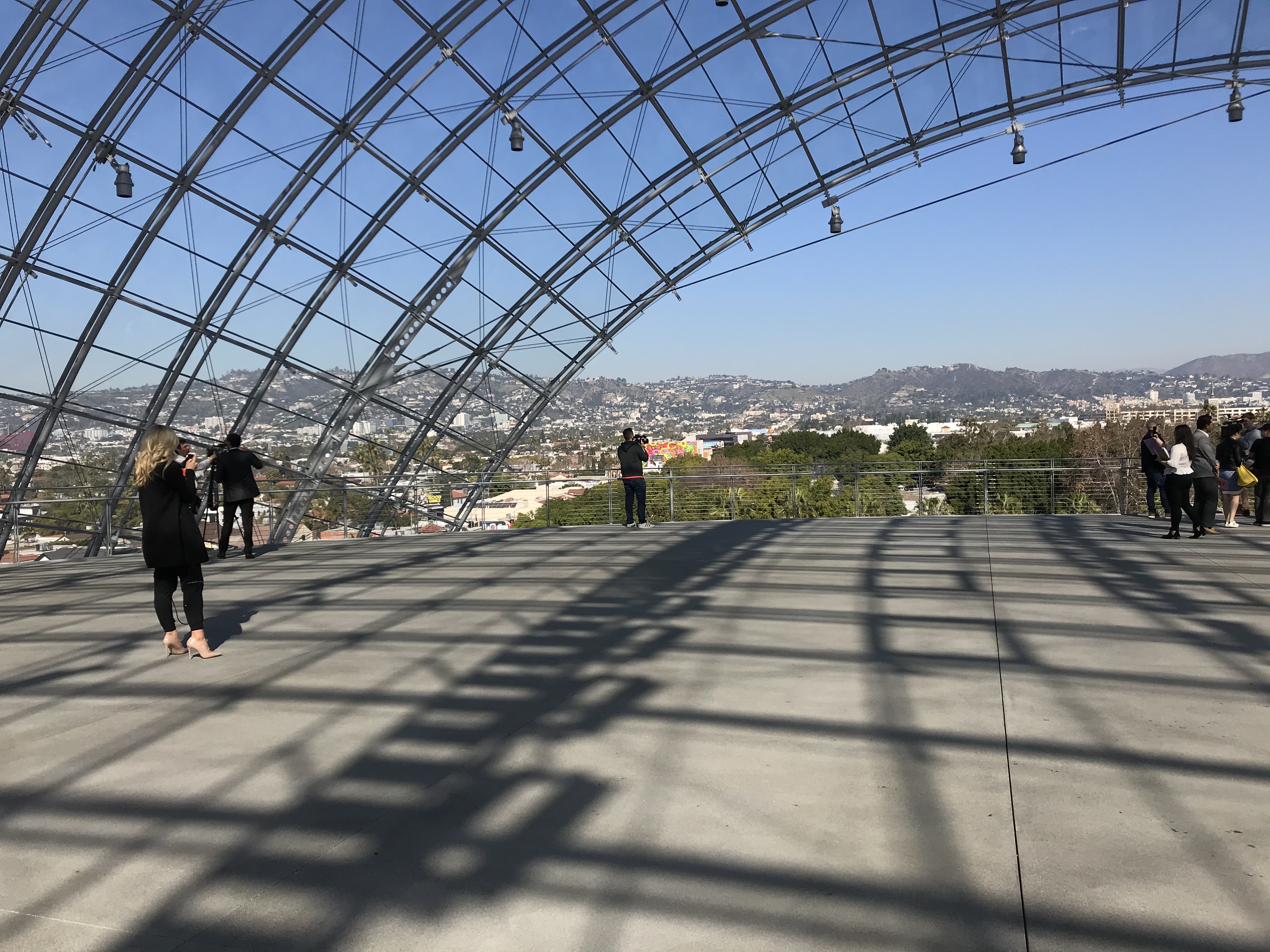 In one big change from the usual Oscar ceremony, four Oscar-nominated songs will be performed on the Academy Museum of Motion Pictures rooftop at full length and shown on a 90-minute pre-taped Oscar pre-show hosted by actors Ariana DeBose (“Hamilton”) and Lil Rel Howery (“Bad Trip”), “Oscars: Into the Spotlight” (ABC, 6:30 p.m. ET/3:30 p.m. PT.), including Celeste, H.E.R., Leslie Odom, Jr., Laura Pausini, Daniel Pemberton, and Diane Warren. The fifth, “Húsavík,” will be recorded with Molly Sandén in Húsavík, Iceland. The plan is to use the pre-show to frame the show much like the usual Oscar nominees luncheon, creating a sense of community, including an intimate — “teeny-tiny,” said Sher — small-footprint version of a red carpet.

And the Oscar producers are delivering a live after-party, as well: “Oscars: After Dark,” with hosts Colman Domingo (“Zola”) and Andrew Rannells (“The Prom”), and conversations with KCRW interviewer Elvis Mitchell. The special will recap highlights from the Oscar show and allow viewers to watch the winners getting their statues engraved, which usually happens at the Governors Ball.

Finally, as much as the producers welcomed the chance to reinvent the Oscar wheel (including changing the expected order of the awards presentations), they had to work within defined restraints, and that includes a three-hour show with the tagline, “Bring Your Movie Love” that will hand out 23 Oscars and two Governors awards (Jean Hersholt Humanitarian Awards to Tyler Perry and the Motion Picture Television Fund) along with an in memoriam reel. This year Soderbergh, who in 2000 memorably accepted his Directing Oscar for “Traffic” under the influence, is making sure to give winners time to deliver a proper speech. “I was drunk and that is not a lie,” he said. “We want people to say something, we’re giving them space, and we’ve encouraged them to tell a story and say something personal. We’re giving real estate to the winners to create a moment.”

Soderbergh also admitted that while the producers were happy with the final Oscar nominations, a list of Best Picture contenders that have frequently been compared to Indie Spirit nominees — likely to draw historic low ratings — was also not under their control. “We were happy when the nominations came out that they represented the most diverse films and nominations in the history of the Academy,” he said.

Added Sher, this year these movies “are available to everyone in the audience globally.” Whether anyone will watch, the producers could not say. “We have to have hope to move forward, we have to fight for cinema,” Sher added.
Click to expand...