It’s no surprise to those who know Lesley Manville, the London-based Olivier Award winner (Ibsen’s “Ghosts”) and 2018 Oscar nominee (Paul Thomas Anderson’s “Phantom Thread”), that she charmingly carries the title role in the third movie incarnation of “Mrs. Harris Goes to Paris,” adapted by writer-director Anthony Fabian from Paul Gallico’s popular 1958 novel. (Back in the day, Angela Lansbury and Gracie Fields did the honors in respective TV movies.)

Cinephiles discovered Manville over her ten-year detour from her early musical theater career (when she was married to Gary Oldman; they raised a son) to collaborate with filmmaker Mike Leigh after 1980’s BBC movie “Grown-Ups.” After that, she helped him to create memorable characters in seven films, most notably the heartbreakingly annoying Mary in “Another Year” (2010).

Manville recently rejoined her “Vera Drake” costar Imelda Staunton in Peter Morgan’s “The Crown” Season 5 (which starts streaming this November on Netflix) as Princess Margaret to Staunton’s Queen Elizabeth, which recently wrapped in London, to be followed by the sixth and final season. (For her part, Manville played Elizabeth II in “The Theory of Everything.”)

Truth is, prizes come for roles that grab attention. Manville was robbed of awards glory for her delicate performance opposite Liam Neeson in the 2020 two-hander “Ordinary Love” as a happily married woman isolated by breast cancer, even as she’s lovingly supported by her husband. The well-reviewed but small-scale relationship drama never registered with awards voters during the pandemic.

On the other hand, Focus Features, which picked up “Mrs. Harris Goes to Paris” for $15 million in March 2021, opened the movie well this July weekend, although a summer release makes it tougher to bring the film back into the Oscar conversation.

Manville deserves more than credit for her Mrs. Harris performance: when she was tipped to the script by her producer friend Rima Horton, the widow of actor Alan Rickman, who had long been a fan of the book, Manville signed on as executive producer. The actress not only delivers a stellar turn as Ada, a widowed cleaning woman who falls in love with a client’s couture Dior gown and sets her sights on acquiring one, but helped with key hiring decisions including cinematographer Felix Biederman. Isabelle Huppert as Ada’s Paris House of Dior nemesis Claudine Colbert, who seeks to keep out the riff-raff, was already on board.

“I wanted to have creative input with the film, because I am putting myself up front,” said Manville on Zoom from Belfast on one of her rare days off. “I wanted to make sure I’d be surrounded by actors who would be the best people to be playing those parts. Directors do ask me about other actors that I’d like to have in the project, or costume designers, cinematographers, and hair and makeup. But this time round, I just wanted to make that official. Anthony Fabian is a director who has not made as many films as me. So I thought, ‘I’ve got a lot of experience to bring to the table here.'” 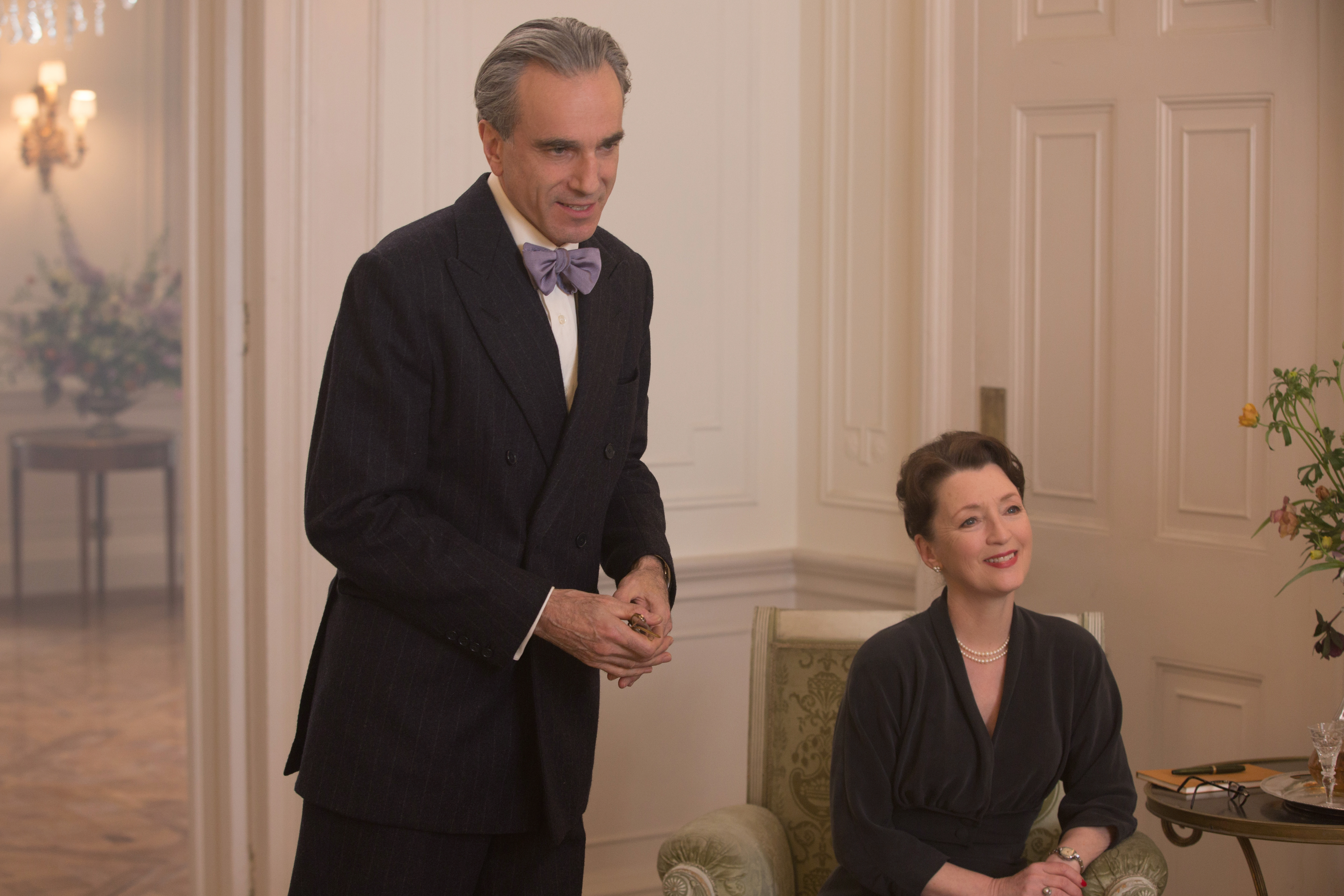 Manville relished carrying the film. “A lot of films that I have done have been supporting rather than leading roles,” she said. “And also characters that were were often unlikable: big, complicated, and troubled. There was something so wholesome and lovely about Mrs. Harris. And I thought, just because she’s that way, it doesn’t mean she’s any less of a complex character. She’s still got to be invested with everything that I would do with any other character I’m playing, but it’ll just be nice to play somebody who’s this good and posits such a positive force for all the other characters in the film.”

And there’s also tremendous allure for the makeover trope in a Cinderella story. “There are so many women from whatever class and background who love to put on an amazing gown and feel transformed,” Manville said. “Even more for Ada Harris, because she hasn’t come from money. It’s an epic thing in her life to be able to go and get herself a Dior gown. And she wants it for no other reason than for its beauty. She wants to do it all herself. I can understand that simplicity and drive to achieve that on your own, without any support from anybody else. It’s heroic, in a way.”

The movie takes Mrs. Harris from London’s entrenched class divisions to Paris, which has its own tiers of snobbery. It’s satisfying not only to watch Harris transform from an invisible person in the corner into a mighty force for change. Despite myriad setbacks and humiliations, she prevails because of her decent character, which makes her attractive to many people, if not her various romantic interests (Lambert Wilson and Jason Isaacs). 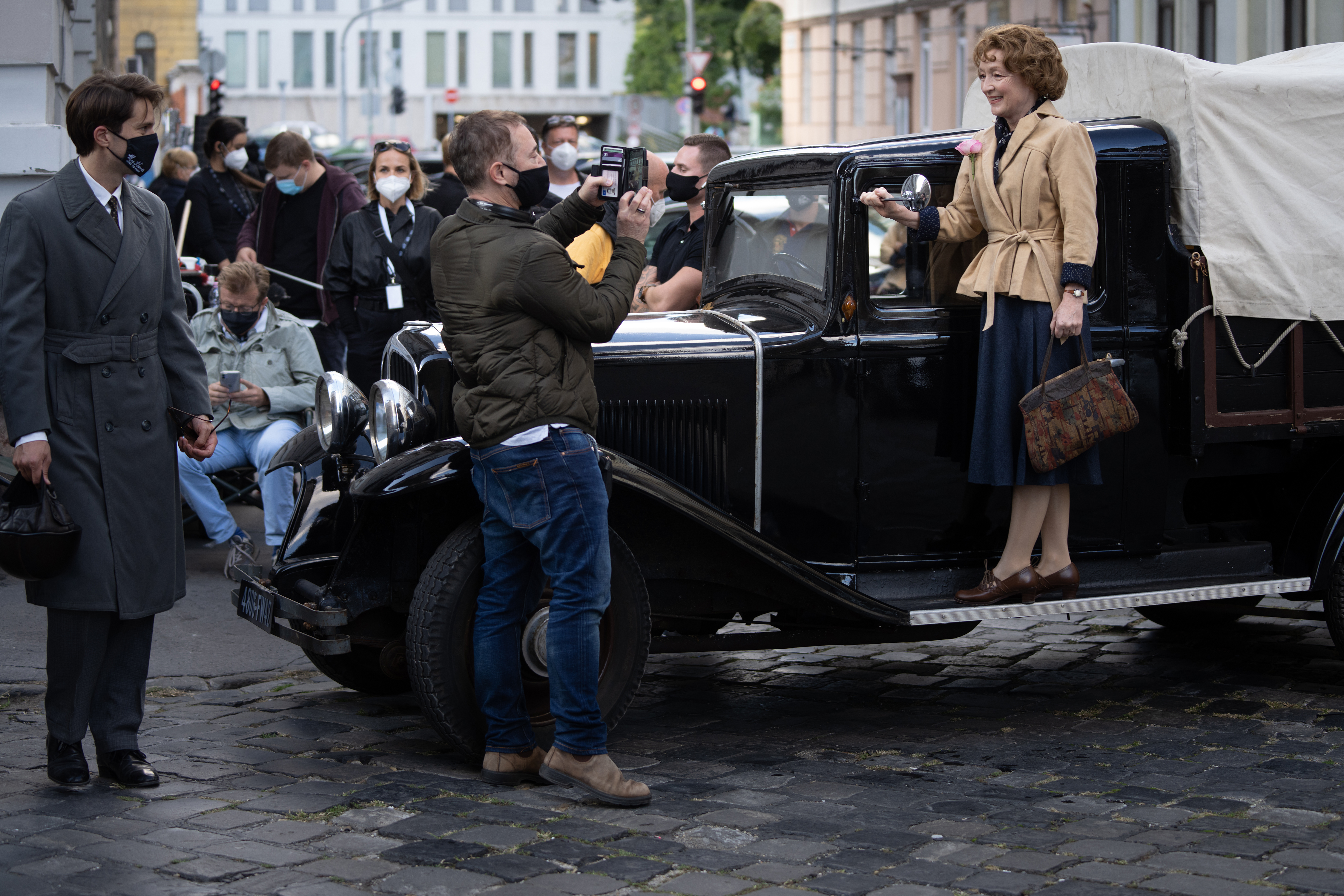 Lucas Bravo, Tony Fabian, and Lesley Manville on the set of “Mrs. Harris Goes to Paris”

Isaacs is Ada’s old bar pal Archie, who still flirts with her before heading to the dance floor with younger women. “His shortcoming is that he doesn’t see her until she gets the [Dior] gown on,” said Manville. “And then: ‘You’re beautiful inside and out.’ And you think, ‘Well, yeah, but you didn’t think that earlier on when she was still wearing her old woolly coat and homemade hat, when you were more interested in the 25-year-old?'”

Watching Manville spar with Huppert is like seeing two titans in the ring. “Ada Harris wasn’t intimidated by [Claudine Colbert],” said Manville. “And neither were Isabelle and I intimidated by each other. We’re both big theater actresses and we’ve both played many of the same parts. So there were really nice conversations to be had.”

Costumes are obviously key to the story. Manville has worked with many brilliant costume designers, from Mark Bridges on “Phantom Thread” to Amy Roberts on “The Crown.” She was thrilled to collaborate again with three-time Oscar winner Jenny Beavan (“Cruella,” “Mad Max: Fury Road,” “Room with a View”).

“She’s a great woman to spend a day with trying on frocks,” said Manville, “but when I’m working with somebody so clever, it helps me to build the character. Because obviously, there’s the Dior dresses, which she’s done spectacularly. But she helped me to find Ada with her ideas about what day-to-day conditions were like: it’s as important to get that right, the aprons that she wears to go and clean, as it is to get the Dior gowns right. And we established that Ada is pretty good with a needle and cotton herself, so the hat had little felt flowers stitched on it.”

As for “The Crown” series’ Princess Margaret, “she is such a formidable character,” said Manville. “This whole project is the highest possible standards of filmmaking. My dear friend Imelda and I are having an absolute ball playing sisters. Margaret and Elizabeth were each other’s closest relationship. They loved each other deeply and dearly. And so it’s very nice to be doing that with Imelda. Because we’ve known each other for decades. We’re good friends. We love each other. That lovely, lovely combination makes the filming very special.”

As for another Mike Leigh reunion, his next one boasts an all-Black cast, so Manville will have to wait. “I’d like to think that we’ve got another film or play in us,” she said. “I’d hate to think that I’d worked with him for the last time. I’ve been working with him since I was in my twenties. So I’m hoping that it’ll continue.”

A Focus Features release, “Mrs. Harris Goes to Paris” is now in theaters.
Click to expand...