“Wow, what a room! Who wouldn’t want to be here tonight?” was both the line Academy President Janet Yang opened the 13th Annual Governors Awards, and the thought attendees had in their minds entering the ballroom at the Fairmont Century Plaza in Los Angeles.

While the event has long had the reputation of being the best place for Oscar hopefuls to mingle with influential voters, its first real post-COVID ceremony (last year’s was ravaged by Omicron) was packed to the brim with boldfaced names like Robert Downey Jr., Gabrielle Union, Adam Sandler, and Margot Robbie. At a certain point it became easier to keep track of contenders that were not there (i.e. “The Son” star Hugh Jackman and “Empire of Light” lead Olivia Colman).

This year, the honorees were actor Michael J. Fox, songwriter Diane Warren, and directors Peter Weir and Euzhan Palcy. After Yang’s speech where she declared her and new Academy CEO Bill Kramer “are committed to refreshing and rebranding what the Academy and the Oscars mean to [people] around the world,” actress/writer Mindy Kaling was brought on stage to give a monologue that served as one of the best Oscar host auditions the audience had seen in a while.

The TV mogul immediately won the audience over by saying “There’s no better time for the Governors Awards than tonight, the Saturday before Thanksgiving, a famously convenient and errand-free time,” and cracked more jokes about the joys of nepotism, and how “it’s so much fun to see women go to battle and for something other than our own bodily autonomy.” While she had a good line for every honoree, the two that made viewers’ jaws drop were asking Fox where Alex P. Keaton was on January 6, 2021, and saying of Palcy: “She is perhaps best known for directing ‘A Dry White Season,’ which until recently was what I called award season.”

Up first to collect a trophy was Fox, this year’s recipient of the Jean Hersholt Humanitarian Award. Woody Harrelson, a current Best Supporting Actor hopeful for “Triangle of Sadness,” introduced his fellow sitcom-turned-movie star by telling a story of the pair drinking cobra blood on location in Thailand, and got serious for a moment to say “Michael J. Fox never asked for the role of Parkinson’s patient or disease advocate, but make no mistake, it is his greatest performance.” 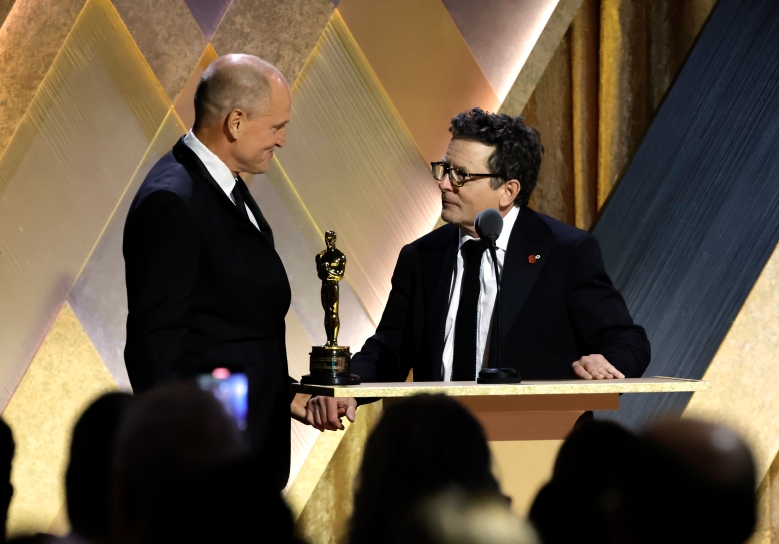 Fox, who has raised over a billion dollars dedicated to a Parkinson’s Disease cure after being diagnosed with the affliction at 29, couldn’t help himself from responding to the room’s standing ovation with the joke “You guys are making me shake.” An expert comedic actor, as Harrelson pointed out, the “Back to the Future” star bounced seamlessly between funny lines like how his parents would have loved to been at the awards because “Irish people kvell too,” and tear jerking moments like a recollection of his wife Tracy Pollan committing to seeing it through with him as he battled the disease. To that same effect, Fox left the stage by saying “My optimism is fueled by my gratitude and with gratitude optimism is sustainable. I can’t believe I’ve been standing here for this long. It’s a miracle. I definitely can’t walk and carry this thing, so I ask Tracy to once again carry the weight.”

Next up was Diane Warren, the first of the three receiving an honorary Oscar, who was introduced by Cher. While the icon and Oscar-winning star of “Moonstruck” gave hilarious anecdotes about all the songs Warren pitched her, even following her to an Al-Anon meeting to get the job done, when it came time to hand over the award, Cher looked close into Warren’s eyes to say “I’m so thrilled to present this to you. You’ve waited so fucking long.”

Finally holding her own Oscar statue after 13 losses in the Best Original Song category over the years, Warren first joked “Mom, I finally found a man.” Becoming more earnest, the prolific songwriter expressed gratitude for the moment, saying “I finally get to say a speech because I’ve had a lot of speeches that got crumpled up in my pocket,” and addressed her late parents watching her from up above.

“This is emotional. And ugly crying on a big screen is not pretty. But my dad is saying to my mom, ‘See I told you so. The kid has talent,’” Warren said. “One more time, the words I thought I would never get to say, but always dreamed I would: I’d like to thank the Academy.”

After an introduction by “Fearless” star Jeff Bridges, writer-director Peter Weir was the next honorary at the podium recounting the early days of Australian filmmaking, and goings on behind the scenes of his movies “Witness” and “Dead Poets Society.” The only speaker to not take advantage of the teleprompter, Weir paused before addressing his late friend and star of the latter film: “To Robin Williams, dear Robin. If I could just have him back here just for five minutes, then he could be here and I would say to him, ‘Robin, I’ve got something, could you do something on being an intimacy supervisor?’” The director ended his address to the Academy Board of Governors with a special shoutout to members of the 53-member group representing 17 branches that work in crafts. “That’s what it’s really all about.” 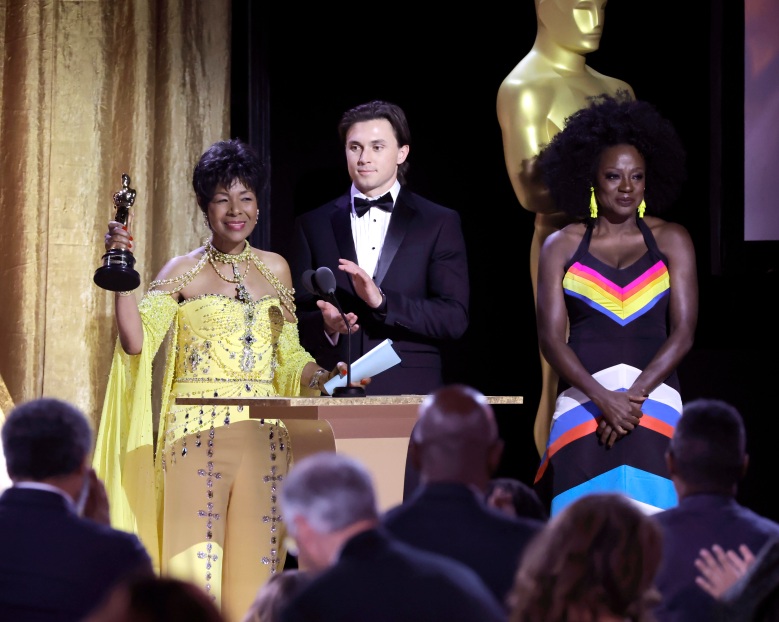 As a closer, Best Actress contender Viola Davis came out to introduce Euzhan Palcy, the final honorary Oscar recipient of the night. In a stirring speech, “The Woman King” star went off script to praise the pioneering director with lines like “You epitomize the Emile Zola quote that is ‘I’ll tell you what I came here to do. I, an artist, came here to live out loud.’” Though Palcy is the first Black woman to make a studio film, the aforementioned, Oscar-nominated apartheid drama “A Dry White Season,” she accepted the award by talking about what pulled her away from filmmaking.

“Many have asked me why for a time I stepped back from the career I love. The answer is I stepped back so I could truly stand up and stand tall,” said Palcy. “If I didn’t make any movies for a few years, it’s because I decided to keep silent, and I kept my silence because I was exhausted. I was so tired of being told that I was a pioneer. I was so tired of hearing praise for being the first of too many firsts but denied the chance to make some movies I’m compelled to make.”

The Martinique-born filmmaker, who brought film students from her home country with her to celebrate, said that she did not find her fire again until she started seeing the successes of directors like Ava DuVernay, Kasi Lemmons, and Gina Prince-Bythewood (who the audience camera then zoomed in on). Expanding on her break from directing, Palcy said “It was because I had lost my willingness to hear those words. ‘Black is not bankable.’ ‘Female is not bankable.’ ‘Black and female is not bankable.’” Gesturing toward Davis beside her, Palcy added “Come on guys, look at my sister standing by me. Black is bankable. Female is bankable. Black and female are bankable.”

Bringing the house down, Palcy ended her speech with the magnetic energy of a political candidate announcing their choice to run for President: “Tonight I have been given credence to what I’ve always voiced: The impossible is possible. And you spark in me the joy to shout again. Camera sound then, action. This is my shot tonight, a shot of inclusion, of pride, of happiness. I congratulate the Academy for helping to lead the charge to change our industry and for opening the doors that were closed to the ideas and vision that I championed for so long. It encourages me to raise my voice again to offer you movies of all genres that I always wanted to make in my own way without having my voice censored or silenced. And very importantly, my stories are not Black, my stories are not white, my stories are universal.”

Afterward, Prince-Bythewood was in awe to be mentioned by “the queen.” She and other Black female filmmakers in attendance, like her “The Woman King” colleague Terilyn A. Shropshire (a governor of the film editor branch), “Black Panther” Oscar winner Ruth E. Carter (a governor of the costume designers branch), and “Black Panther: Wakanda Forever stars Angela Bassett and Danai Gurira, all gathered near the exit of the ballroom to pose for a photo with Palcy and her Oscar. 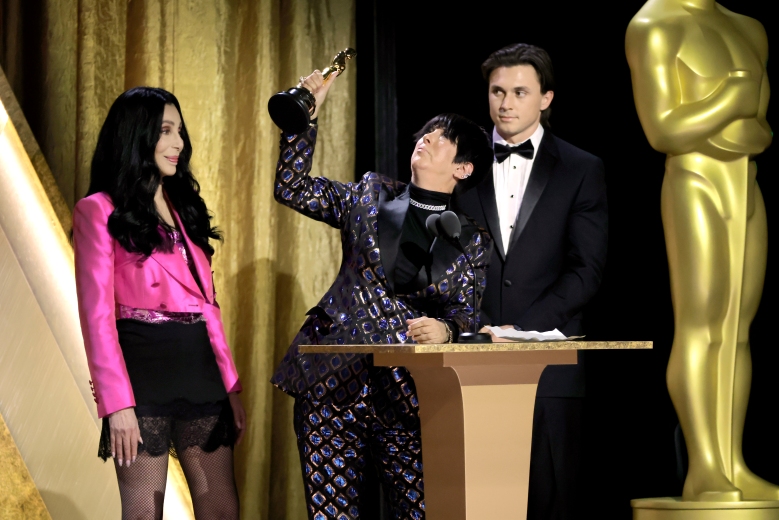 Cher presents Diane Warren with an Oscar onstage during the 13th Governors Awards.

Elsewhere, Diane Warren was surrounded by a crowd of friends, family, and music colleagues to pose for more pictures onstage with her Oscar. Earlier, during the event’s pre-reception, as the lobby of the ballroom started to fill with punctual attendees like “The Whale” screenwriter Samuel D. Hunter, “RRR” director S.S. Rajamouli, “Everything Everywhere All at Once” directors Daniel Scheinert and Daniel Kwan, and “The Good Nurse” star Eddie Redmayne, there was a joke that Warren rolled so deep that you could find a guest of hers at every corner.

As groups started to form, interesting, innocuous interactions between Oscar hopefuls were born, like “Causeway” star Brian Tyree Henry in a corner with “Devotion” director J.D. Dillard and star Jonathan Majors, plus “She Said” stars Carey Mulligan and Zoe Kazan, and “The Fabelmans” star Paul Dano (Kazan’s husband), comparing notes on attending Yale with Majors and Kazan. “The Inspection” star Jeremy Pope, a Best Actor contender, came in ready to look for “Top Gun: Maverick” actress Jennifer Connelly. Her husband Paul Bettany, who is getting ready to star with Pope in “The Collaboration” on Broadway, tipped the actor off to the fact that she would be wearing a white dress.

While he was not there with any project to promote to Academy voters, producer/director J.J. Abrams chatted with Academy CEO Kramer near the bar, as “Marcel the Shell With Shoes On” filmmakers Jenny Slate and Dean Fleischer-Camp and “Aftersun” director Charlotte Wells and star Paul Mescal (another Best Actor contender) conversed with each other on the opposite side.

When everyone was in the ballroom, it was clearer that most major frontrunners for Oscar nominations were in attendance, with “The Whale” star Brendan Fraser, “TÁR” star Cate Blanchett, and “The Banshees of Inisherin” stars Colin Farrell and Brendan Gleeson all seated at tables paid for by their film’s studios. However, some of the more popular attendees drawing partygoers ready to chat with them were Majors and his “Devotion” co-star Glen Powell (pulling double duty hanging with the “Top Gun: Maverick” crew as well). Jennifer Lawrence was also fielding congratulations for her work leading Apple TV+ drama “Causeway,” and as the night was coming to an end, there was a point where “Top Gun: Maverick” actor Danny Ramirez bowed down to “Everything Everywhere All at Once” star Michelle Yeoh, one the attendees who was best able to work the room while others were stuck in a corner.
Click to expand...