David Gutnik’s debut feature “Materna” starts with an all-too familiar scene: a woman on a train, obviously desiring to be left alone, is being talked to by a highly aggressive man. He’s shouting, causing a scene, and the more the woman ignores him, the more frustrated he becomes. It’s unfortunate that the rest of “Materna” simultaneously never lives up to that opening intensity nor authenticity with regards to women in contemporary society, more content to look at elements of femininity that just feel old-fashioned.

Gutnik utilizes the technique of telling four separate stories, each spotlighting one woman on the train that day. We’ve seen this method of storytelling done so often in other independent features and when done poorly it feels like what it is: a gimmick. Here, there’s never a feeling of unity between the women at any point — outside of them being women with motherhood issues — so they play like four disparate stories with a highly tangential reason for being told as one.

The first woman we see on-screen, the one being harassed, is Jean (Kate Lyn Sheil). Jean lives a life of total solitude, spending her days brushing her teeth, eating, and arguing over the phone with her mom about the prospect of freezing Jean’s eggs. This is the first instance of the script — credited to Gutnik as well as Assol Abdullina (who won a Best Actress award for the film when it debuted at Tribeca 2020) and Jade Eshete, who also star in the film — beating in the theme that women are too often defined by motherhood, both their embrace of it and their resistance to it.

The way Sheil plays the role, it’s easy to believe that Jean just doesn’t want any other human interaction, though there’s not nearly enough about her life to prove that theory. The only thing passing for a plot is that she makes money testing out some type of VR app that mimics sexual encounters. Sheil is such an expressive performance, whether she’s in pain or enacting a one-woman sex session in a motion-capture suit. Much is made of a possible glitch in the app, and she later talks as if what happened during the app testing was assault.

When Jean turns up pregnant, it’s enough to make you think you’re watching a modern interpretation of “Demon Seed.” Frustratingly, for all the movie’s emphasis on motherhood, and Jean’s mom yammering about egg freezing, the movie doesn’t live in Jean’s world long enough for us to figure out how she feels about being pregnant at all, let alone that she’s become pregnant with seemingly zero human interaction. 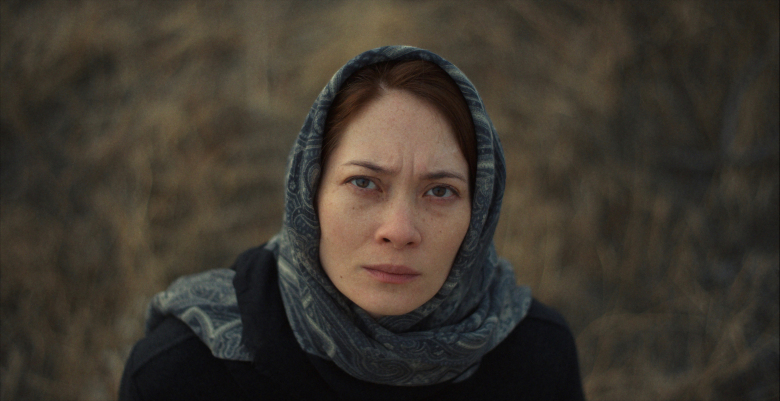 It’s one of several moments where ambiguous, shadowy themes are meant to substitute for actual storytelling. The topic of abortion is soon brought up, and while Sheil plays that scene wonderfully, showcasing a range of emotion not often seen in movies focused on pregnancy, her storyline ends too abruptly to process any point the movie seeks to make on it before moving on to the next woman.

That woman is Mona (Eshete), an actress struggling to process a contentious relationship with her mother who’s a Jehovah’s Witness. Eshete and Cassandra Freeman, who plays Mona’s acting coach Wanda, are just as wonderful as Sheil. Compared to Jean, Mona has a more thorough plotline as she struggles with differences in lifestyle and faith with her mother.

The two talk primarily in text, giving audiences all they need to know about this relationship and why it’s failed so horribly. An extended dialogue sequence wherein Wanda portrays Mona’s mother almost veers into surrealism. Is Mona seeing her mother in some way that we aren’t? But it ends up being a beautiful moment where Mona can say what she’s long wanted to.

The third story follows Ruth (Lindsay Burdge), a wealthy Jewish woman who enlists the help of her younger brother (played by Rory Culkin) to talk to her young son. If the first two segments focus on daughters and mothers, this one looks at motherhood itself, but the message is completely anathema to the previous two stories. 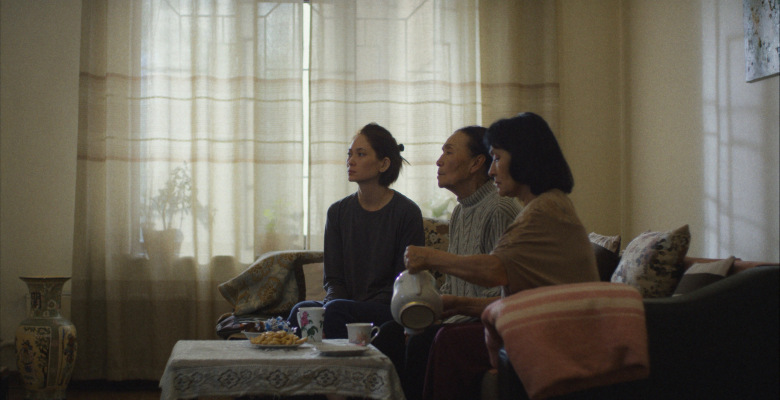 It’s truly unclear what we’re supposed to take away from this story because, like Jean’s, there’s not a whole lot of history to suss out a point. Why does Ruth even bother to call her brother Gabe, considering his political views skew so far from hers? The entire reason for Culkin’s arrival is to present an extended dinner sequence that no doubt several families have had over the last year and probably don’t want to see utilized for filmic purposes. Culkin, to his credit, tries to get at the heart of the narrative but is often just left speaking in questions.

The final story, following Perizad (Abdullina), a woman traveling to her home country in the wake of her father’s death, feels the most like a fully formed story. Had it been in a different film, it could have worked as its own standalone feature. Abdullina, alongside Zhamilya Sydykbaeva, who plays her mother, are wonderful. Where the previous stories feel like trite explanations of why people can’t communicate, this story contextualizes that with Perizad’s desire to move to New York, away from her family and their strict Muslim ways. Too often that viewpoint is filtered through a male perspective, but here we see three generations of women coping with what that sense of feminine connection has done to them.

“Materna” has some good ideas, but the surrounding landscape feels generic. Abdullina, Sheil, and Eshete do great work, but it’s hard to suss out what the intention is when their characters and history feel half-formed. By the time the inevitable encounter on the train occurs, it’s just tiring to see the same segment repeated, another go-round on a familiar track.

Utopia opens “Materna” in select theaters in NY and LA today, a digital release will follow on Tuesday, August 10.
Click to expand...

Staff Member
Moderator
Reading this review (without having seen the movie), the first thing I thought was: why did this man decide to make a movie about four WOMEN on a train? He might have done better with one about four men. Or maybe not...
www.maralesemann.com
You must log in or register to reply here.

news ‘Zola’ Broke the Rules, and Janicza Bravo Deserves Awards for Taking It There