news Lynn Shelton Wasn’t Finished: How the Filmmaking Community Scrambled to Celebrate the Director During the Pandemic

​
When filmmaker Lynn Shelton died suddenly in May 2020, much of the independent film community was beside itself. One month later, several of her peers came together in a powerful hourlong tribute posted to YouTube, one of the first pandemic-era specials that actually seemed to work in the format. “Her Effortless Brilliance: A Celebration of Lynn Shelton Through Film and Music” assembles many of Shelton’s collaborators to provide an overview of her career, with stunning musical performances from many of her credits interspersed throughout. It was exactly the sort of DIY initiative that Shelton embraced throughout her career, but for director Megan Griffiths, it was just the starting point for bolstering Shelton’s legacy.

Shelton broke out of the Seattle film scene with her lo-fi comedy “My Effortless Brilliance” in 2008. Appreciation for her naturalistic style grew around her poignant character studies like “Humpday,” “Your Sister’s Sister,” and “Laggies,” but she spent the past decade navigating the larger arena of TV production, with directing credits that ranged from “Mad Men” to “New Girl” and “GLOW,” the latter of which was one of several collaborations with her romantic partner, Marc Maron. The couple were on the verge of developing a new feature together when Shelton passed from acute myeloid leukemia, a matter of weeks after the release of her latest directing effort, “Little Fires Everywhere.”

“Her Effortless Brilliance” was produced by Mel Eslyn, the president of Duplass Brothers Productions, along with Griffiths (“Sadie”), another Seattle-based filmmaker, and Shelton’s longtime publicist, Adam Kersh. Mark and Jay Duplass, both of whom worked with Shelton on a range of projects, executive produced. The result, which has been submitted to the Emmys for the pre-recorded variety special category, provides a touching immersion into Shelton’s communal spirit: It careens from testimonials from collaborators such as Rosemary Dewitt and Reese Witherspoon to moving performances from a diverse array of musicians. The result is an aesthetic triumph as much as a tribute, and a key starting point for anyone keen on understanding Shelton’s long-term impact. In this oral history, Eslyn, Griffiths, and Mark Duplass explain how the project came together — and why it’s hardly the last word on Shelton’s career. 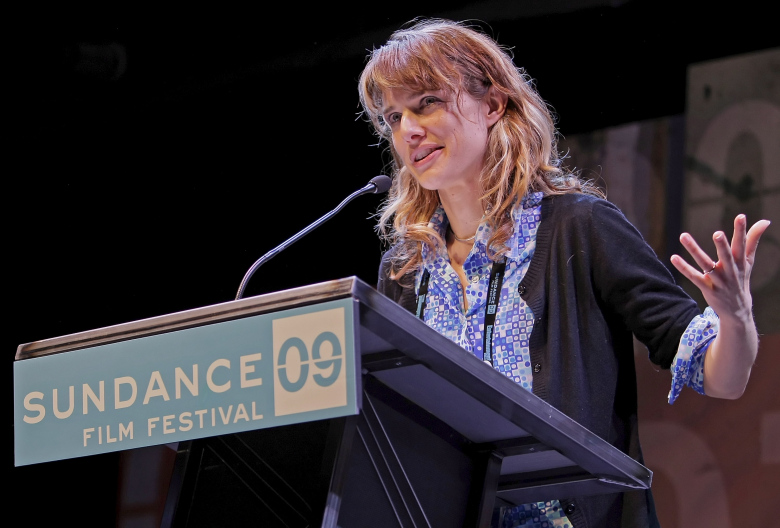 MEL ESLYN: The day after Lynn passed, Michaela Watkins started a nightly Zoom meetup that anyone could join. All three of us were on, but it was [Shelton’s publicist] Adam Kersh’s idea. We all just felt this collective energy and nobody knew what to do with it. We knew that so many people, including those who weren’t on those Zooms, wanted to find a way to honor Lynn and also to work through their grief. Adam said, “There are all these musicians on these Zooms and actors and artists. How can we take all of that and make something beautiful together?”

MARK DUPLASS: Megan grabbed that baton and took the leadership role. Megan had these wonderful ways of galvanizing all of the different elements of the community. It was very in line with what I noticed about her when I first started working with Lynn and the rest of the Seattle scene around 2007. Megan was like the ultimate first AD at that time. And she really first AD’d the ever-living shit out of the Lynn Shelton grieving process for all of us.

MEGAN GRIFFITHS: Lynn’s process of making things was always such an inspiration to me. It was such a huge part of my filmmaking sort of school, as I was working on everybody else’s movies before I was doing mine. And I just wanted to share that aspect of her. But it was just a small part of her life. I’ve spent a lot of time with her immediate family in the wake of all of this, and there’s like a whole different project that exists that would just celebrate her in that sphere, and in the television sphere — all the other professional sides of her.

ME: Everybody wanted to be involved. It was incredibly hard to make something that she would have been the most excited about, but can never experience. There were a lot of conversations about who we thought could speak best to each project and half the time it would be three people, so we had to dwindle it down a lot.

MD: The one thing that really crossed my mind as these guys were making this thing was that this was basically the kind of movie that Lynn would have made for one of her closest friends or family members if they had passed. This was her kind of thing. She would move quickly. She would move on instinct. She would jump into a project and think, “This is cool, there’s a connection between music and film here with this person. I don’t know exactly what it is. I want to start gathering the favorite people and I’ll figure it out as we do it.” And there would be lots of laughter along the way.

MG: We made a little cheat sheet for folks in terms of how best to record yourself. It was early in the pandemic so we weren’t all these professional Zoomers as we are now, but there was a lot of outreach to figure out who was going to do what, and then it was trying to get the best audio, especially for the music. Luckily, all those people who did that were musicians and so they were really self-sufficient from their own studios and provided such beautiful recordings. The most challenging ones involved more than one person, like Breathe Owl Breathe, who did “Playing Dead,” from “Your Sister’s Sister.” They each recorded separately and I was doing a mix based on what they had sent me, but they ended up sending me their own mix because they had all three of them as well.

For “Old Town” from “$5 Cover,” I asked Kevin Murphy from Moondoggies to record his version, then sent it out as a blast to everybody who had been a cast member on “$5 Cover” and said, if they felt like it, they could add an instrument to the mix. There was no dictating who would do what. I just said, “Please let me know before you do it just so it’s not like a cacophony of a ton of guitars.” It ended up just being this really beautiful mix that included Seth Warren with his violent and other instruments that weren’t in the song before. It was a really special, heartfelt performance. It was one of the many parts of the tribute that made me cry, and it was just as emotional to put it together.

MG: When we had our YouTube premiere, I was just getting texts from so many different parts of my career that had also intertwined with Lynn’s career. There were the people that I had met along the way, because of her, but also people who didn’t know her and felt like they were getting to know her through watching the tribute. It ended up giving a lot of people a window into her life. Some of the projects we showcased were lesser-known, like “$5 Cover,” which is technically a web series that we included because it stands on its own as a feature. So we were able to expand people’s view of Lynn from all sorts of parts of her life. 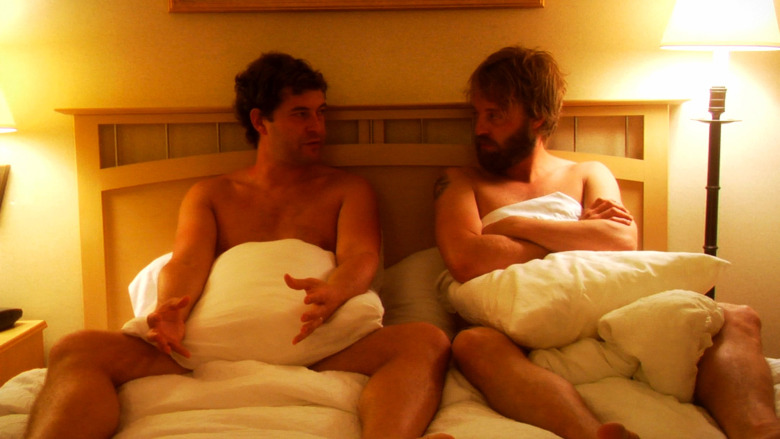 MD: For the past 15 years, I have found myself that I’m looking for “young” up-and-coming talent. Now, we’ve helped to spearhead this Women of a Certain Age grant that is aimed at first-time female filmmakers over the age of 39, because that’s where Lynn was when she made her first feature film. And I’ve tried to stop saying the word “young” when I’m trying to talk about fostering new or fresh voices. Lynn made her first feature with a sense of wide-eyed youthfulness and excitement, but also with this whole life that she had led — having been married, raising a child, going through multiple careers. Why are we not giving these people their shots? Why are we only looking at the 22-year-olds coming out of film school? That was a blind spot for me.

MG: And there’s no shortage of those women. Mel and I watched all of their application materials. It’s such a rich group of talent that isn’t being given a platform. So it felt like a very fitting legacy.

ME: After Lynn passed, I went into her home where she had moved. She had just started to settle into a life in Los Angeles with Marc Maron. I remember finding a piece of paper that just said, “I have yet to make my masterpiece.” It was something that Lynn had written down.

For somebody who has had such a body of work, there were umpteen things in the lineup for her. Marc was a big part of that. I know they were writing a movie together. It’s in a vault somewhere underneath that guitar case or something. There was a whole wealth of material opening up for her. She had been doing so much TV and was shifting into doing more films.

ME: Thank God she was able to make “Sword of Trust” with Marc. I think that was just a tiny sliver of a window into where she was heading with him. 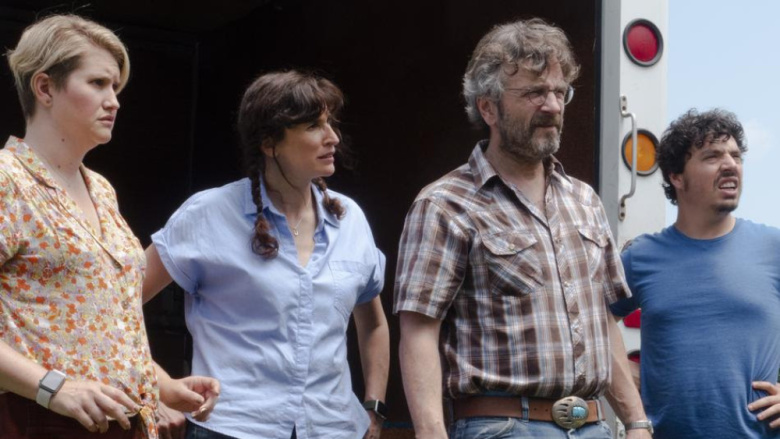 MG: I’ve found work from her days in school, and the photography is really what knocks my socks off. She had a lot of really interesting New York street photography in the ’90s, and she did a lot of Cindy Sherman-style portraiture. It’s a whole different version of her just playing with gender and identity. She was ahead of a lot of conversations that we’re currently having. She made a really great documentary called “The Down of Her,” about female body hair, which I just watched for the first time after she passed and it’s so good. And that’s just the tip of the iceberg. There’s a bunch of stuff I haven’t even seen yet that was on Super 8 and just got transferred. It’s just a really deep well.

MD: I think she made quite a few masterpieces, but she still had some hunger left in her. The last time I spent with her was on the set of “The Morning Show,” when she was directing me in one of those episodes. We hadn’t seen each other in a little while and we had this really nice, surreal moment of seeing each other from across the room. Without saying it, we both were thinking the same thing: What are we doing here on the set of this multimillion-dollar-an-episode show? How did we get here over the last 15 years? What I felt from her was a sense of calm and a sense of certainty that I hadn’t sensed from her in a while. It’s impossible to say whether these pieces of art we’re after were going to be better or worse than what we’ve made before, but I knew she was excited for it and I feel really sad that we’re not going to get to see what those things turned out to be.

news ‘Zola’ Broke the Rules, and Janicza Bravo Deserves Awards for Taking It There

news From ‘Spencer’ to ‘Spotlight,’ Topic Studios Is Backing One Quality Indie After the Next