Kate Winslet, the seven-time Academy Award nominee and Commander of the Order of the British Empire, is pulling her left leg out from under the table, stretching her bare foot out above her head, and showing off the black leggings she’s chosen for her long day of Zoom interviews.

“Sure, I put a bit of mascara on because I’m talking to fine journalists, but trust me, I’m wearing tracksuit trousers,” Winslet said. “I’m wearing sweats and bare feet right now, and wouldn’t normally wear makeup at all.”

This particular comment arose when the Berkshire-born actor was explaining what inspired Mare Sheehan’s perma-lounge look in HBO’s limited series “Mare of Easttown” — and how the character’s relaxed style isn’t that far removed from Winslet’s.

“Mare Sheehan is — she’s kind of disgusting,” Winslet said. “She’s a hot mess most of the time, she doesn’t give a shit what she looks like, she’s kind of stopped caring what people even think about her… We made decisions creatively that this was a woman who looked at herself in the mirror when she brushed her teeth in the morning and would not look in the mirror again [all day]. That’s just who she is. That’s like most busy mothers I know — that’s like me. It really is.”

And that’s when the leg came out.

She has reason to remind everyone. Over the years, Winslet’s unvarnished interviews and breezy persona have proven just how far removed she is from many of the characters she plays. You wouldn’t catch Rose from “Titanic” telling anyone to “Keep on trucking” or Mildred Pierce calling out a friend’s heightened interest in feet.

Still, most people aren’t as familiar with Winslet’s offscreen life as they are her onscreen characters, and the seven-time Oscar nominee (and winner for “The Reader”) has played a lot of women in history. Five of her seven nominations came for period roles, and her only mainstream TV part before Mare was as a working mother from the 1930s. Most audiences are used to seeing Winslet at her most proper.

That, in part, is what makes her performance in “Mare of Easttown” such a breath of fresh air. Introduced puffing on her vape pen before huffing her way through a prolonged foot pursuit, Mare is a far cry from the prim and proper version of Winslet last seen on HBO 10 years ago. “Mildred Pierce” gave us a classic Winslet performance in an instant-classic miniseries. Watching her embody the eponymous entrepreneur for five brilliant hours of perfectly crafted television was a thrill in its own right. Now, seeing the same actor slump into a wooden chair, throw her leg up on the kitchen table, and spread Cheez Whiz on top of a cheese ball serves as divine dichotomy.

“P.S. That was my addition, on the day,” Winslet said of the double cheese scene. “I was like, ‘Laney!’ — our standby prop [master, Laney Sifford] — Laney! Can you get the Cheese Whiz?’ She’s like, ‘Are you fucking serious, girl?’ And I’m like, ‘Yes, we need the Cheese Whiz on the cheese balls!’ And she’s like, ‘You got it, sister.'”

How fully Winslet embraces Mare’s mentality, physicality, and, yes, the challenging Delco accent lays any worries to rest that this part was easier than any other. On top of that, Winslet also took on the title of executive producer, which didn’t come lightly. Winslet said she had to “earn my stripes” over the last 10-to-15 years, as she got more creatively involved with projects “from a very early stage.”

“I’m not one to follow a trend. I just like to do my own thing. So there’s a reason that I didn’t get into producing earlier in my career. I’m an actor, and I love my job. I was always fine doing exactly that. It’s enough for me, anyway, to just be doing that,” she said. “With ‘Mare,’ it just felt like the right time. Plus, I had learned so much about producing, and I thought, ‘Well, if ever I’m going to produce, I want to know what I’m doing.’ I don’t want to have the title in name only. I don’t want to do that. I think people maybe do that a bit, and that’s not my bag.” 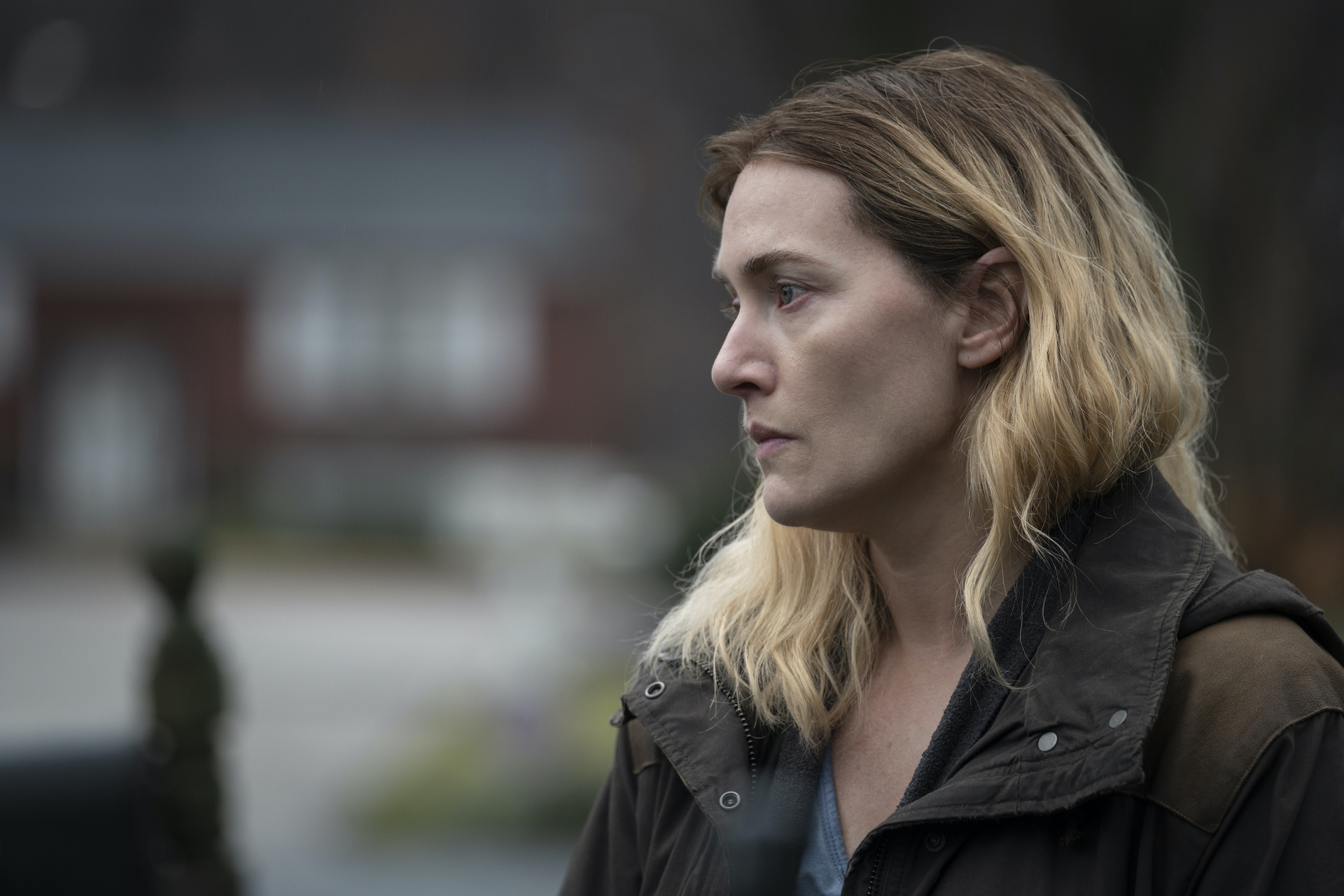 Kate Winslet in “Mare of Easttown”

Winslet assumed plenty of standard, non-movie-star responsibilities as an executive producer. When we spoke in late March, she and writer Brad Ingelsby were having conversations every other day “because we’re still tweaking things within the show or refining story arcs that might need a little clarity or might need pulling back on,” she said.

“She’s been intimately involved from the outset,” Ingelsby said in a separate interview. “It’s really [about], ‘How do we stick the landing?’ All my conversations with Kate are just, ‘Hey, do we need to do a little more in Episode 2 just so that Episode 6 [works]?’ and ‘Can we add another ADR line in Episode 3 so that Episode 7 can pay off?’ It’s great with Kate because she’s so invested in the story, she knows what’s happening, and so she’s constantly asking, ‘Have we done enough so that when this happens, the audience isn’t going to feel cheated?’ She’s just been a wonderful ally in terms of the creative.”

Winslet had an impact on set, too. For one, she was there every day — which, as Winslet noted, isn’t always the case for all EPs — helping foster a familial environment and “actually looking out for them.”

“I think she was invaluable,” director and executive producer Craig Zobel said. “I cannot stress enough how impressed I was with her — yes, as a performer, but also as a person. I felt like it was a really collaborative environment between all of us, and she really did care about the show in a story-driven way, in a creative-producer sort of way, and she also just cared about people. She was a really strong leader with all the other actors in a way that you want your No. 1 on the call sheet to be. She was the best I’ve ever seen, in that way.”

As noted in a Vanity Fair interview, Winslet even crawled into the trunk of a car while her co-star Angourie Rice shot a kissing scene, just to make her younger colleague as comfortable as possible.

“There was no intimacy coordinator called in that day, which was fine — it was not a mistake, it was just a scene they weren’t required for,” Winslet said. “But having gone through this as a young actor myself, I remember there are even certain lines of dialogue that feel awkward when you’re young and perhaps a bit inexperienced, or as a person who has had less experience than the character has. Sometimes just having a conversation about those scenes with a director, even that in and of itself can feel a bit awkward because they might just be conversations that you’re not really emotionally ready to be able to have.”

She said, “I did end up getting in the car. I was like, ‘Girls, I’m just going to get in the trunk. I’m just gonna be in the trunk if anyone needs me.’ And actually it was quite good that I was there because the camera operators were the only other people in the car, and they happened to both be men — lovely, respectful, wonderful gentlemen, but still, it made it awkward for those two actors internally. To be there, it just sort of cut through the ice a little bit.” 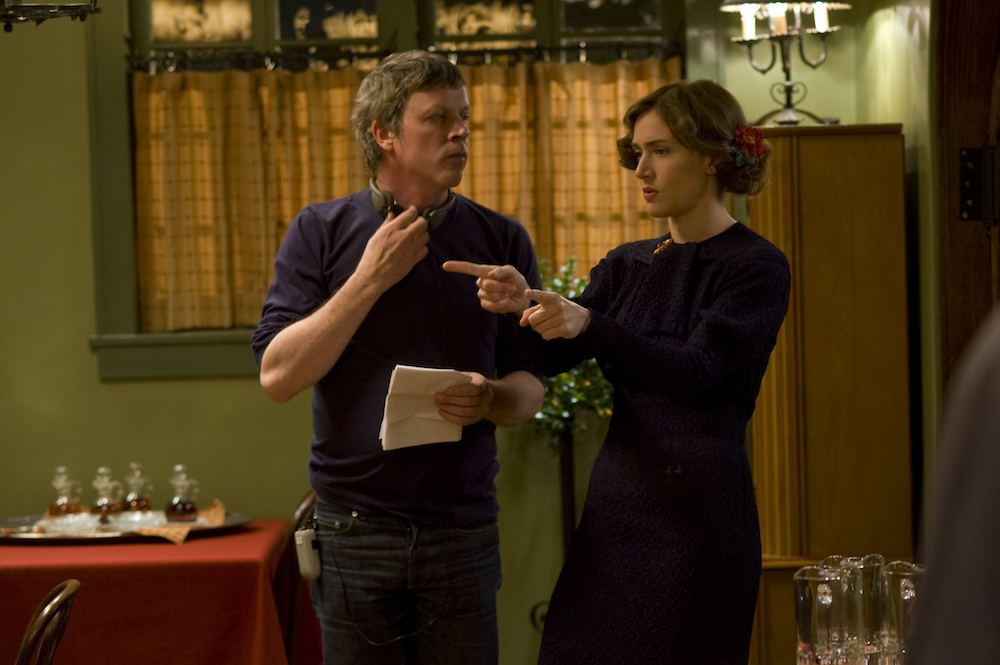 Todd Haynes and Kate Winslet on the set of “Mildred Pierce”

At a young age, Winslet said the way Emma Thompson led as a writer and star on “Sense & Sensibility” inspired her to become a similarly warm and considerate leader. But rather than only look for good examples, she also “stockpiled” less thoughtful and appropriate tactics that she hopes to cut out of shoots entirely. One of Winslet’s central tenets as a producer, or simply a working professional, is to eliminate waste and superficial status symbols. To wit, she insisted her trailer on the “Mare” set was the same size as all the others, fulfilling a long-term wish that was regularly ignored when she was just an actor.

“I remember telling our producer Mark Roybal, about a week before we started, ‘Oh, just quickly, it’s very, very important to me that you know this: I don’t know how the process works with booking trucks and equipment, but if I arrive on day one and I have a trailer that’s bigger than everyone else’s, no matter what it says on my contract, I will actually cry,” Winslet said. “And then they changed everything! Because, sure enough, there was a trailer that I was supposed to have that was bigger, and then there were probably two or three other cast members [who were set up to] have the same as me, and I said, ‘No, we’re not doing any of that, none of that! Everyone is having the same!'”

Winslet cites her involvement as an executive producer as the main shift between making “Mildred Pierce” and “Mare of Easttown.” Despite the 10 years between them and the disparity in Winslet’s roles, both projects share DNA in their star, her co-star — Guy Pearce plays Winslet’s paramour in each series — and HBO, the only network to lure Winslet to television. (“I love working with them,” she said. “Francesca Orsi and Nora Skinner were my go-to women on the show. They are outstanding, strong women with brilliant creative minds.”) The work has evolved alongside Winslet, and she couldn’t be prouder of the equality she’s able to foster while still turning in commanding, all-consuming performances.

“It’s just how it should be,” she said. “It’s how I endeavor to be as an actor, but it’s also how I try to be in my life, as well. I don’t believe in hierarchy. I really don’t, especially amongst actors. I generally think it’s quite bad, and it’s also where a lot of money can get wasted.”

One thing’s for certain: Mare wouldn’t tolerate it. Just like Winslet, she’s too busy putting in the work to waste time on appearances.

“Mare of Easttown” airs new episodes Sundays at 10 p.m. on HBO. “Mildred Pierce” is available to stream on HBO Max.
Click to expand...

news The ‘Mildred Pierce’ Food Scenes Are Still Worth Savoring