When two veteran stars collide in a romantic triangle psychodrama directed by French auteur Claire Denis, the alchemy is powerful. “Both Sides of the Blade,” adapted by Denis and Christine Angot from her 2018 novel “Un tournant de la vie,” won raves and the Silver Bear for Best Director at the 2022 Berlinale. That’s partly because Oscar winner Juliette Binoche (“The English Patient”) and Vincent Lindon (Palme d’Or-winner “Titane”), who had never worked together before, struck sparks on their austere pandemic set.

“There was some tension sometimes because of his nature,” Binoche told IndieWire during a recent Zoom call. “His need of controlling is very strong. And I’m not like that at all. So I was a little taken aback by that situation. But at the same time, I had to accept it, because there was no other way. And Claire was letting it happen. She’s not a director who would say ‘no’ — sometimes she would. At the end, it worked well for the film. That’s the main thing. Claire knew, because she knew Vincent from the past and she knew me, that we were very different.”

Lindon starred in Denis’ “Bastards” and “Friday Night,” while Binoche worked with the filmmaker on “High Life” and “Let the Sunshine In.” In “Both Sides of the Blade,” a marriage dynamic is revealed: at the start they’re on vacation, relaxed, swimming in the sea, making love. (Denis and her cinematographer Éric Gautier shot the scene in Corsica with iPhones.) Back home in their sparse Paris apartment, Sara is a professional, a radio journalist, the provider of the household, while her husband Jean, an ex-con with no credit card who has served time for fraud, is trying to get back in the game as a sport scout. After ten years of stability, Sara unexpectedly catches a glimpse of her ex-partner François (Grégoire Colin, “Beau Travail”), who is Jean’s best friend. He’s with a younger woman, and she feels a pang. When François contacts Jean with a business proposal, her ex comes back into her life — and things get messy.

The experience of filming during the lockdown with roaming hand-held cameras on a 360 degree set was a challenge for everyone. Working with Denis is always exhilarating for Binoche. There are no rehearsals. While Binoche prefers to keep the script in mind, Denis and Lindon, especially, like to improvise.

“There’s a freedom in her way of telling the story through moviemaking,” Binoche said. “When she’s choosing a shot, she goes around like a little bit like an animal, who will catch what she needs, what she wants to be in tune with, or touched by. She has a lens that she’s using in order to find the frame she wants, how far she wants to be, close or far away. She walks around with this lens, trying to find the best place to tell the story. She’s searching even though she has made schools for learning filming, has made many films, has been the assistant of different remarkable directors [Wim Wenders, Jim Jarmusch]. But it feels like she’s still a student. And during the shooting time, she’s leaving you absolutely free. And if you want to do another take, she’s happy to go with it. So the trust is bringing joy in me each time, because when the director tries to control the actor, I understand the fear in the director. But when the director trusts the actor, it just gives wings.”

Denis left space for the actors to find their own choreography. “It was not always easy,” said Binoche. “Most of the time, it was difficult, because of the film’s complex themes. There’s love to start with, but doubt is coming into that couple, which brings conflicts. Vincent and I were very different, almost opposites. He likes to improvise and let go of the lines. Because it was a script that was written by a specific writer, I felt like I needed to be fair with writing that is quite precise. But it brought a certain energy between us that was not always easy. We were quite brave, to continue no matter what. Because we love Claire. You never know how it’s going to be and how you transform things. Because the film needs to find its own rhythm and its own genuine genuine back and forth. In a conflict, there’s the need to be together and the need to explode. It’s both.” 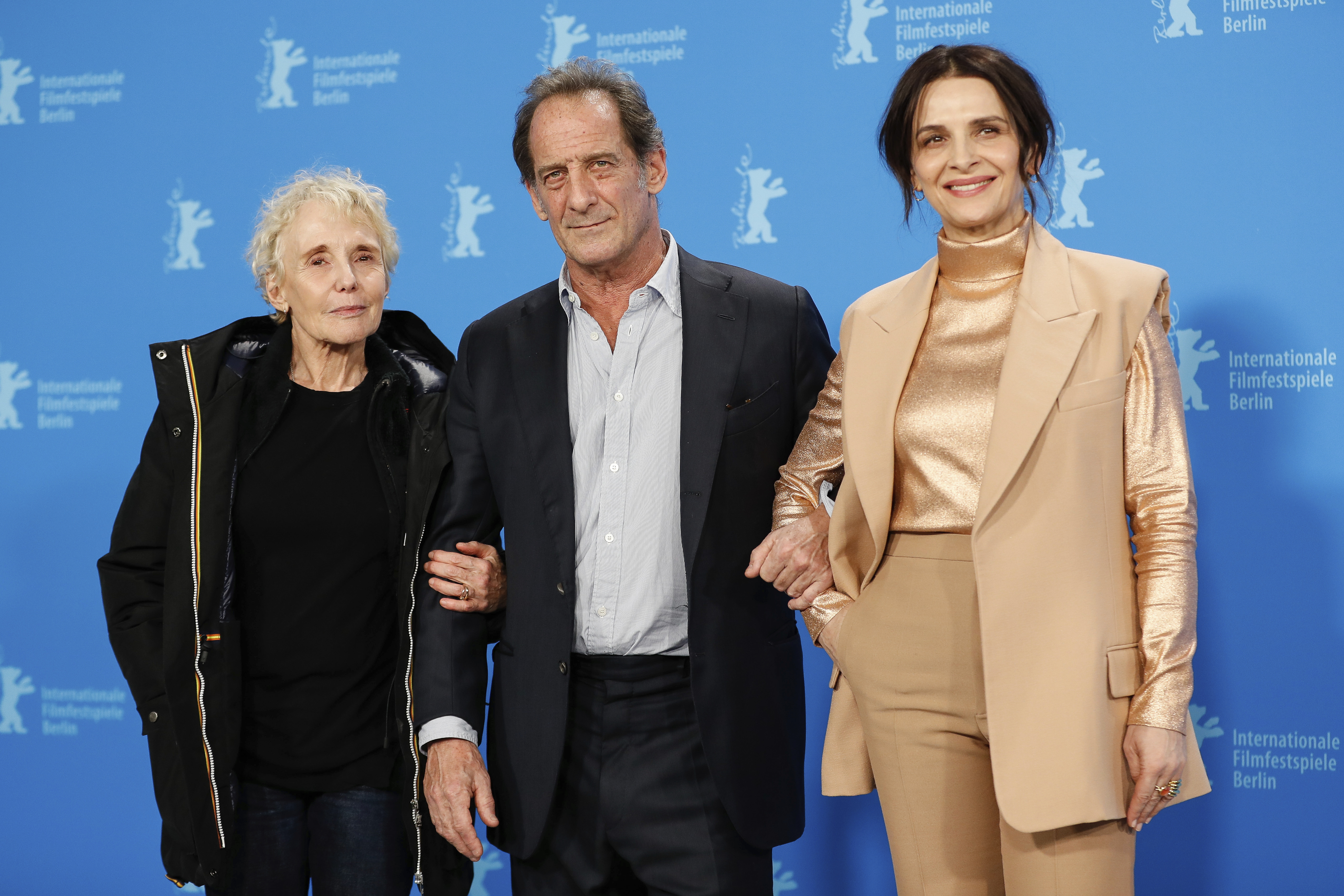 Director Claire Denis, actor Vincent Lindon, and actress Juliette Binoche are at the photocall of the competition film “Both Sides of the Blade” at the 72nd International Film Festival in Berlin

And Binoche was riding the whirlwind of a woman who was not in control of her surprising emotions. “She’s surprised by this need she has in her that she needs to explore, in order to know why it’s there, and what she’s feeling, and who she is,” said Binoche, “to go back to that love, even though it feels totally inappropriate because as a couple you don’t go out with somebody else, you stay faithful. But she feels that she needs to go there in order to know what it is exactly. That’s hitting her. So it’s not a comfortable situation. It’s painful, it’s frightening, it’s fearful. But she wants to live life, and know what’s going on in her.”

All the tension comes to a head in an explosive scene, shot in one long take, between the husband and wife. It took all night to shoot. Binoche confirmed that it was painful and excruciating. For some reason, she wound up on the floor. “Claire is very much where the actors are and what they want to do,” she said. “And I tend to not give too many ideas in order to see how things go together, as Vincent needs to control the situation. So he almost wants to direct, so it was interesting to see the energy that was going on.”

Binoche has another movie coming out this month: “Paradise Highway” (hitting theaters on July 29, from Lionsgate), filmed in Mississippi with Norwegian-American short filmmaker Anna Gutto, making her feature film debut. Even though it would be a hot, muggy, mosquito-ridden, quick low-budget shoot, Binoche liked the script about a Quebecois truck driver who winds up smuggling an underage fugitive from sex trafficking (discovery Hala Finley) across state lines. “She was struggling to have people trust that she could make it,” Binoche said. “So I thought, ‘Well, she needs to do it.’ And it was a challenging role. And I like this subject matter. I felt it was an important one. And I wanted to work with Morgan Freeman.”

And she got to drive a semi. “It was physically difficult, exhausting,” she said. “But emotionally, it was such a roller coaster. And time is pressing, and this subject matters.”

Binoche is having a fine time demanding a lot of herself as she fields multiple offers across English and French film and TV. And that means playing real women who are complicated and not necessarily likable. “Probably because of maturing, it becomes fun,” she said with a laugh, “because I feel free. I’m freer to just explore the human condition and hearts and go with it.”

IFC Films will release “Both Side of the Blade” in theaters on Friday, July 8.
Click to expand...