Staff Member
Los Angeles City Hall was packed with hundreds of climate change activists and several celebrities Friday morning. Though their backgrounds were diverse — speakers ranged from indigenous community leaders to actors Jane Fonda and Joaquin Phoenix — they all shared a unifying message: “Our house is on fire” and the climate crisis must be confronted.

The participants congregated for the city’s first Fire Drill Friday, an ongoing environmental activism movement that was spearheaded by Fonda and Greenpeace last year. Fonda, a lifelong activist who supported the Civil Rights Movement and opposed the Vietnam and Iraq wars, has dedicated much of the last few months to the movement; she moved to Washington D.C. and started protesting outside the Capitol every Friday to urge elected officials to address the planet’s ongoing climate crisis.

Though filming duties for Netflix’s “Grace and Frankie” required Fonda to move back to Los Angeles, she brought Fire Drill Fridays with her, and the movement has continued to grow. The Los Angeles-based Fire Drill Fridays will only occur the first Friday of each month due to Fonda’s work schedule, but once “Grace and Frankie” filming wraps up, Fonda plans on touring the nation with Greenpeace and hosting local events, with the end goal being to make the 2020 presidential election more climate-focused.

Many news headlines regarding Fire Drill Fridays have focused on the arrests of its high-profile activists. The typical Fire Drill Friday event includes a variety of speakers, which leads to acts of nonviolent civil disobedience, usually for crowding or obstructing. Fonda was arrested five times during the Fire Drill Friday events in Washington D.C. (one of those arrests prevented her from accepting a British Academy Britannia Award in-person) and stressed that civil disobedience was a powerful political tool, particularly when used by celebrities with a strong public platform.

“Every week you have the opportunity to put yourself on the line,” Fonda said in an interview. “Civil disobedience is not a first resort, but it’s a step up. You’ve petitioned, marched, pleaded, and begged, and you haven’t been heard, so you take the next step. To align your body with your values is very empowering, and this offers that opportunity.”

Civil disobedience is not a requisite of Fire Drill Friday events. Though Fonda still speaks during each gathering, she noted that she cannot participate in civil disobedience for three months due a court agreement stemming from her D.C. arrests. 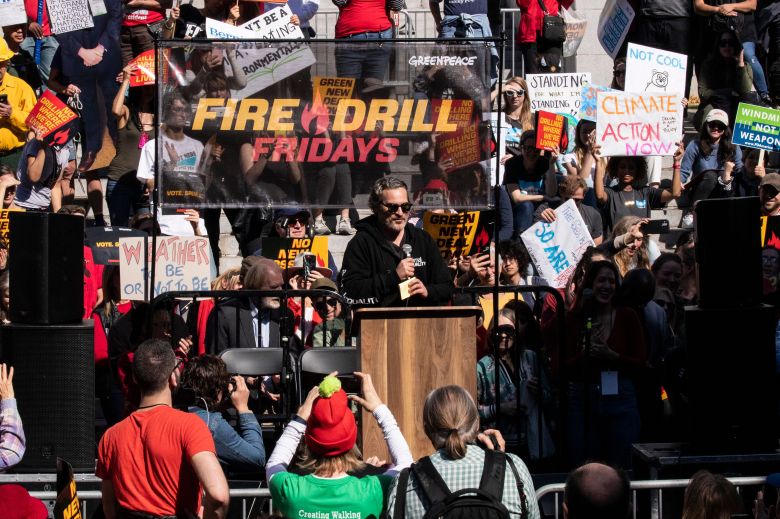 A Greenpeace spokesperson said that several dozen participants gathered at Maverick Natural Resources (a company that operates a large number of oil and gas wells in Southern California and the Central Valley) in an act of civil disobedience Friday afternoon. No arrests were made, per the spokesperson.

While the mainstream media and the cultural zeitgeist have begun paying more mind to climate-related issues in recent years, Fonda’s Fire Drill Fridays has enjoyed particularly rapid growth thanks to its high-profile participants. Celebrity activism is a key component, and the latest event’s other participating Hollywood workers included Joaquin Phoenix, Amber Valletta, Bonnie Wright, Brooklyn Decker, June Diane Raphael, and Norman Lear, though most of their speeches were intentionally brief and served to hype up the event’s primary speakers, who were all environmental activists or community organizers.

Fonda also led the movement’s teach-in events, where she’d join prominent activists and climate change experts to discuss climate’s impact on subjects ranging from jobs, agriculture and the military, with the talks broadcast via Facebook Live.

While courting well-known individuals such as Phoenix — who was arrested during a Fire Drill Friday event in Washington D.C. last month — helps raise awareness about the movement, Fire Drill Fridays’ celebrity elements are primarily intended to provide a platform for more overlooked demographics to stress the importance of climate activism, according to Greenpeace executive director Annie Leonard.

“The high-profile celebrities draw the spotlight, but understand that the real voices needing to be amplified aren’t theirs,” Leonard said in an interview. “The celebrities have the role of introducing the speakers, drawing the cameras, elevating the issue, and growing the audience. They create an incredible spotlight that we use to prioritize the voices that are marginalized in national conversations, such as women, youth, and indigenous people who often live at the forefront of climate change.”

Fonda noted that the movement has expanded far more quickly than she anticipated. Fonda reached out to Leonard to discuss climate activism last September and the duo found that they were influenced by the same activists, namely Greta Thunberg — hence the movement’s oft-repeated warning that “our house is on fire” — and author Naomi Klein’s “On Fire: The Burning Case for a Green New Deal.” The work of anti-apartheid activist Randall Robinson, who also practiced civil disobedience with well-known influencers, was another key influence and inspired the duo to get additional celebrities involved with their environmental movement. Other celebrities who have participated in prior Fire Drill Friday events include Martin Sheen, Ted Danson, Susan Sarandon, and Sam Waterston.

“We’re growing in numbers and want more people to be comfortable being out and demanding,” Fonda said in an interview. “We always focus on the science and the demands are: No new fossil fuel expansions, phasing out existing fossil fuels over 30 years, and supporting a Green New Deal.”
You must log in or register to reply here.
Share:
Facebook Twitter Reddit Pinterest Tumblr WhatsApp Email Link
Top