Independent cinema has long been enamored with the coming-of-age story. Especially for early career filmmakers, the rough road from adolescence to some semblance of adulthood offers the ultimate hero’s journey — mired in unexpected obstacles both external and within. There’s another reason so many first-time filmmakers choose this narrative path: they’re usually quite close to it themselves.

In her scrappy feature debut “Inbetween Girl,” writer/director Mei Makino shows small town America through the experience of a biracial Chinese American teenager as she navigates first love, sexuality, family upheaval, and artistic ambitions. With so many irons in the fire, “Inbetween Girl” bites off more than it can chew, and the amateur cast does it no favors, but it is bursting with heart and vision.

The saving grace of “Inbetween Girl” is its boisterous, sarcastic, and amiable protagonist, sixteen-year-old Angie Chen, who is brought to life by a naturalistic performance from newcomer Emma Galbraith. Though the film saddles Angie with a few too many narrative threads to wrangle all by herself, her charm and poise shine through the obstructions. Makino employs a hodgepodge of filmmaking conventions throughout the film, from old VHS footage to direct address via Angie’s personal vlog. Much of the story’s exposition comes from Angie’s diaristic narration, which she addresses to “future Angie,” which feels both hokey and surprisingly underutilized during key timeline issues.

When we first meet Angie, she’s pining after popular doofus Liam (William Magnuson), who would rather hang out with Angie than his “very Catholic” (read: prudish) girlfriend Sheryl (Emily Garrett). One night, Liam climbs into Angie’s bedroom window and unceremoniously kisses for a few seconds before whipping out a condom. Given all the focus on consent in teen fare of late, this murky beginning feels clunky at best and problematic at worst. While it’s clear Angie and the film don’t side with Liam, the blurred lines aspect of his behavior is mostly glossed over in service of the larger overarching theme that he’s an asshole. While indie film thrives on creative freedom, this is a case where notes might have been helpful. 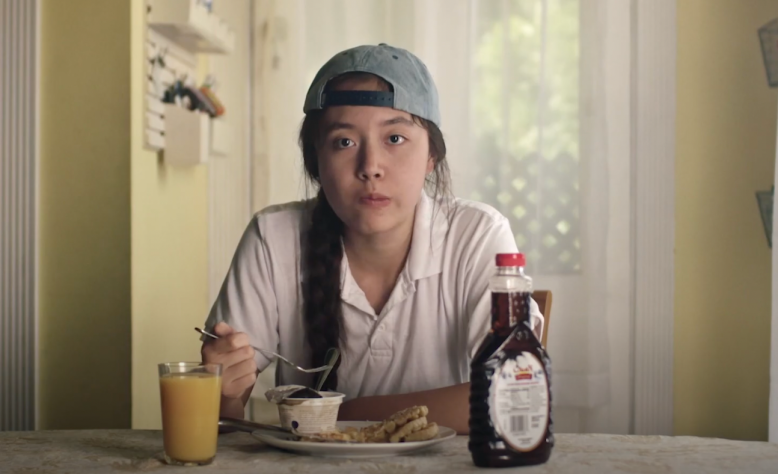 While Angie begins to enjoy herself (a sex-on-the-brain montage is particularly fun), Liam is determined to keep their little trysts a secret, especially from his blonde influencer girlfriend. Meanwhile, Angie’s mom is absent and her dad is playing house with his new girlfriend, a Chinese woman with a perfect daughter destined for Stanford. Angie’s relationship with her dad, and her reaction to his personality changes once he’s able to embrace parts of his culture, offers ripe dramatic opportunities, but the film is juggling too much to engage with them meaningfully. The film ends with a series of reconciliation scenes, including one with her potential step-sister, that could have used a heavy editing hand.

Angie’s whimsical creature drawings appear throughout the film, though it’s light on the animation that would tie it all together. There’s a huge missed opportunity for animation during the first sex scene, which instead cuts to black for far too long and uses only voiceover. Set in Galveston, Texas, the setting looks like Anywhere, USA. We get a brief explanation of the local term B.O.I. (born on the island), but other than a short beach shot towards the finale, the benefits of regional filmmaking aren’t apparent on the screen. Angie’s story maybe universal, but there is beauty in the specific.

Disregarding its unwieldy structure, Makino’s script is quite funny in parts. It’s no doubt what SXSW jurors saw when the film won the Texas festival’s Visions Award when the film debuted at the festival last spring. When Angie’s mom finds a condom wrapper in her bedroom, she improvises a glittery condom sculpture as explanation, which she then must hastily slap together in art class. Extolling her sexual endeavors to her future self, she offers a proud you’re welcome: “I am really learning how to bang.” When she comes clean to her mom about Liam, she sweetly cries: “I was having an affair with that boy.”

These punctuated moments, and Galbraith’s wry delivery of them, offer a glimpse of Makino’s sharp dialogue and sense of character, something that could have shined through if only she had been hemmed in a bit.

But as Angie feels caught between many worlds, so does her story. A little bit teen sex romp, a little bit female friendship plug, a little bit Asian American immigrant story, “Inbetween Girl” has no shortage of things to say. It just needed to trim out the noise so we could hear them.

A Utopia release, “Inbetween Girl” is now on VOD.
Click to expand...