news In ‘We’re All Going to The World’s Fair,’ Director Jane Schoenbrun Found Their Voice and Their Identity

When Jane Schoenbrun’s “We’re All Going to The World’s Fair” debuted at the 2021 Sundance Film Festival, they were not only introduced as a solo filmmaker, but as their true self for the first time. A longtime fixture in New York’s independent film scene, Schoenbrun has worn many hats. They co-created the experimental online variety show “The Eyeslicer,” which featured work from David Lowery, Ari Aster, and Shaka King, among others. They spearheaded the omnibus film “collective:unconscious,” which saw five experimental filmmakers interpreting each other’s dreams. They also launched The Radical Film Fair, an ambitious but short-lived film flea market that connected independent filmmakers, film-lovers, and distributors.

That was all before their “egg cracked,” a shorthand for the moment when a trans person finally comes out to themselves. In true Shoenbrun fashion, “We’re All Going to The World’s Fair” isn’t a straightforward narrative about being trans. It’s an experimental horror thriller about the perils of being a very online teenage girl. As an early millennial filmmaker who came of age during the heyday of the internet, Schoenbrun evokes the wild west feeling of AOL chat rooms and the sense that one could take on any identity. In an impressive performance from newcomer Anna Cobb, the character of Casey deftly embodies a specifically teenage online presence as an outlet for the exhausting desire to be anyone other than who you are.

It’s a feeling Schoenbrun knows all too well.

I’ve known Jane personally for a few years, and I was curious how much their transition aligned with the conceiving and making of the film. As I suspected, the two things were indelibly linked.

This interview has been edited and condensed for clarity.

IndieWire: The film played Sundance over a year ago now. How has the way you’ve thought about it changed in that time?

Jane Schoenbrun: It feels really distant now, honestly, and I think that’s compounded by transition, for sure. I edited it myself, and I think this thing happens when you’re editing where you’re just watching it over and over again … and you get so insulated from what it is, you know? There is still this really intense feeling of watching it with an audience through fresh eyes that I hadn’t really had before. That really shocked me in how dark the film was and how dark it felt.

I remember sitting there and feeling such a distance from the person who made it, not in terms of “Oh, who the hell did this?” But I’ve changed so much already since I’ve made this, in this really intense and surreal way. Anyone who makes a film would look back a year later and feel a little bit different, but it’s very much compounded by transition and how getting to be comfortable in your own identity and skin, how radically and quickly that can shift your emotional perspective on the world. 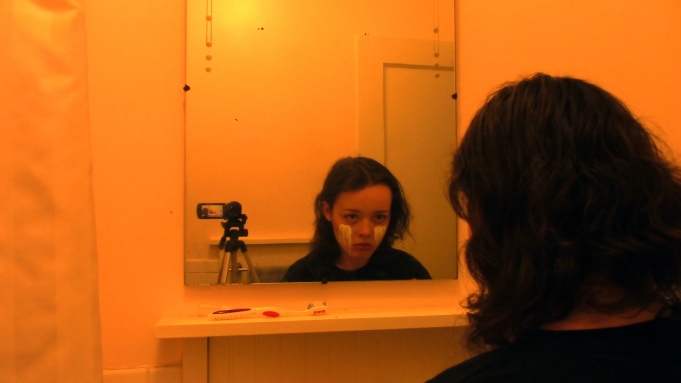 “We’re All Going to the World’s Fair”

I’m so happy for you now that you’re in the light, you’ve come out, you’re transitioning. It seems like you’re doing wonderfully. How much of the writing and filmmaking process mirrored your own coming out process to yourself?

I mean, completely. I wrote the film slowly over many years, although the actual words on the page that resulted in the film only came towards the end of that process. It was sort of a process of knowing what I wanted to explore, both in terms of the world of the film, but also in terms of the feelings underneath the world that I was looking to unpack for myself. And it was the process of looking for a language to talk about that.

Many years and at least one life-changing mushrooms trip later, my egg cracked. And my egg cracked while thinking about why I felt such shame about making art. And the answer to that question was a rather simple one. It was that I was trans and that I was ashamed of that fact. I hadn’t made peace with it yet. I was so repressed. So the process of accepting my identity and, by extension, the kind of art that I wanted to make and what I wanted to talk about that was real and personal and from the ribcage.

And which are excellent.

Thank you. But they were so much easier for me to do than focusing on my own voice as an artist, and I was working with some filmmakers, kind of collaborating and writing screenplays, and I kept finding that every screenplay I wrote was about trans shit. This was before I knew I was trans, which is ridiculous. The warning signs that the universe sends you are so loud, or that your subconscious sends you.

Was there a therapeutic element to making the film?

Yeah, I think I was processing trauma. Trauma that I didn’t have any language for and processing a feeling that had been with me in a very visceral way and was actually coming back, and I don’t think it was an accident that it was coming back at that time. It was becoming harder to hide from myself in a life, a professional life and a personal life. I was aging, in the same way that when I aged through puberty and for the first time was confronted with the horror that a lot of trans people face when they go through puberty, which is the horror of your body changing in a way that is out of your control and something that is, to you, horrifying. 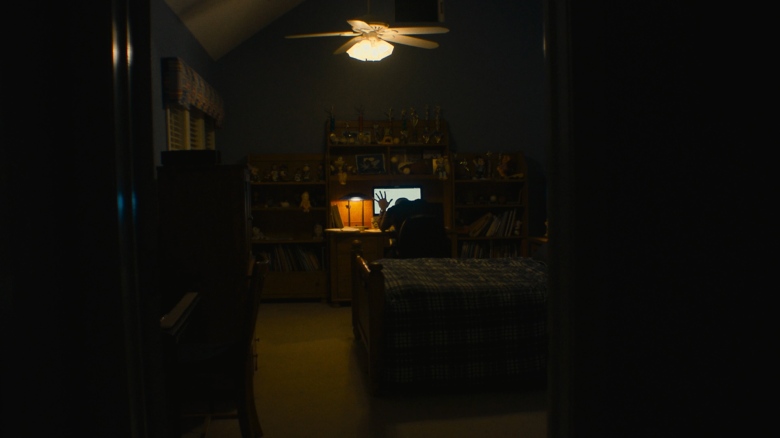 “We’re All Going to the World’s Fair”

It’s interesting, because the film feels metaphorical to me, but maybe to you it felt literal.

How does it feel metaphorical to you?

That she’s waiting for something to happen to her body from this external force that she doesn’t really understand. She’s going to sleep at night and hoping something will change when she wakes up. I’m filtering it through my own experience, but that very much is how I experienced my gender as a kid, going to sleep and wishing I would wake up different, you know?

Yeah, I think it’s very much that. … Post-puberty, I think I had resigned myself to how boring my life was going to be in reality because I was in the wrong body and there were no realistic options presented to me in 2001 that didn’t feel like complete social death, which is not something I wanted to embark on at that age. So fantasy became a really appealing space, and I think a disassociated space, and that is very much at the heart of the film.

I don’t think that Casey believes that these changes are happening to her, but I think she is really enjoying the space that she’s created to explore them in perhaps not the healthiest of ways. It’s also a space that specifically exists, right? The space of fantasy, role play, science fiction, horror. As long as she’s playing with all of this in the first person in that space, she doesn’t need to look at the reality of the feeling. That really resonates with me and my own experience.

Since you mention the first person, you’re playing a lot with subjectivity and audience in the film, from the point of view and the way it’s shot. How did you think about subjectivity and identity and personhood in the way that you set it up?

I thought about it mostly from a character perspective. It’s a strange way to write a character piece, and that is, I think, essentially what the film is. But perhaps it’s not so strange, because I do think that we say things that are different from how we actually mean and feel. Especially, myself as a trans person, you really learn performance in a very specific way. You learn to perform yourself. You learn to be very aware of what people want from you, the gaze that’s on you and your relationship to that gaze, and how you are or aren’t allowed to present within the context of that gaze and its expectations in your own inner self gaze.

I tend to think of the film as a film about performance, right? Because most of what we see in the film, we’re seeing the characters be “themselves” in quotation marks. It’s mediated through the fact that they’re filming themselves, that they know that they’re filming themselves. It’s quite premeditated. And yet, it can still tell us things about them and about how they’re really feeling, because if they’re choosing to present something to somebody else or just for themselves, there’s clearly a reason that. So I think that becomes the key to understanding the character.

How much do you think the lead actress, Anna Cobb, understood about what you were trying to do and say?

I didn’t come out to her until after we had finished production, although she did do a tarot card reading for me at our wrap party and told me that I needed to embrace my feminine side, which was really sweet.

I really tried not to think at all about the trans subtext in the film while writing it and making it. I knew it was there, and I knew that the world of the film was a reflection of dysphoria. I knew that the emotion that I was trying to call to mind was the emotion of not feeling like yourself, this feeling of unreality, of disappearing into a computer. But I think the way that’s reflected in the film isn’t necessarily as straightforward as, “This character is trans, so everything you’re seeing in the film is about that.”

I think that would’ve been pretty counter to the idea of the film, which is a film about not having language for what you’re going through, which is certainly how I felt at that time. It’s trans because I’m trans, and it’s as simple as that. And this is something that I’m proud of, because it was a scary thing to do, to not draw a more specific text or handholding for a cis audience to say, “Look, when the character says this that’s trans, and trans is okay, being trans is great.” That wasn’t the kind of work I was looking to do here. It was much more about like, let me very viscerally see if I can represent some things that I felt and see if there are other people out there who can relate to it.

A Utopia release, “We’re All Going to The World’s Fair” is now in theaters in New York and Chicago, and will expand to other markets and hit digital platforms on Friday, April 22.
Click to expand...

news Rupert Everett Was ‘Frustrated’ Seeing Colin Firth in ‘A Single Man’: ‘That Role Really Should Have Been Mine’

news Ethan Hawke Defends Marvel Movies That ‘People Put Their Hearts Into,’ but That’s Not All Cinema Is