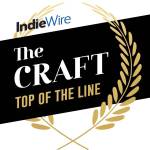 ​
“Mrs. Harris Goes to Paris” is the fourth screen adaptation of Paul Gallico’s 1958 novel “Flowers for Mrs. Harris,” which kicked off a series of bestselling books about an enchanting English cleaning woman and her unlikely international adventures. Though the tale has been filmed three times before (most popularly as a 1992 TV movie starring Angela Lansbury), director Anthony Fabian’s new adaptation seems destined to become the definitive version thanks to its exquisite evocation of post-WWII Europe and the delicacy with which it tells its simple but heartfelt story.

In the film, the title character played by Lesley Manville is inspired to change her life when she lays eyes on her employer’s Christian Dior dress; the British housekeeper is so dazzled that she scrapes together all the money she can and travels to Paris to get her own Dior gown straight from the source. This simple premise belies the complex challenges faced by the film’s costume designer, who had to create a dress so stunning it would instigate a character’s transformation and be a convincing imitation of the work of one of the greatest fashion designers of all time.

Luckily, Jenny Beavan was up to the task. A three-time Academy Award-winner of wildly diverse talents (she designed costumes for many of James Ivory’s genteel pictures as well as for George Miller’s rip-roaring “Mad Max: Fury Road”), Beavan was already a fan of Christian Dior and used his work as a reference point for Emma Thompson’s character in “Cruella.” For “Mrs. Harris Goes to Paris,” she utilized Dior’s historical archives, which contained the designer’s original sketchbooks, workbooks, and patterns, to recreate the dozens of dresses necessary to bring the fashion house to life. Some were vintage pieces borrowed from the house of Dior, some were replicas, and some – like that initial dress that sparks Mrs. Harris’ imagination – were pure Beavan inventions designed in the Dior tradition.

Beavan was able to draw upon not only Dior’s archives but hours of YouTube footage of classic Dior shows and interviews with his models, all of which helped her in her quest for accuracy. When it came to designing the pivotal dress that Mrs. Harris first discovers in her boss’ closet, however, verisimilitude was only one of the requirements Beavan had to fulfill. “There were a lot of storytelling factors that had to be taken into consideration,” Beavan told IndieWire. “It’s got to be something that completely takes Mrs. Harris’ imagination, so there’s a lot of pressure.” That pressure was exacerbated by the fact that, as Beavan noted, usually a dress comes to life when someone puts it on and brings their body language and shape to it – something that would not occur in the case of this dress.

Because Mrs. Harris loves flowers, Beavan went with a floral design that comes across as even more vibrant when juxtaposed with the floral apron and dress that the housekeeper happens to be wearing as she cleans. When she holds the dress up the audience is invited to share her vision of what it would be like to wear it, which leads to another unique challenge of this costume – it had to be designed for two people who would never actually be seen wearing it in the movie. “It was incredibly important that this dress was something Anna Chancellor’s character [Mrs. Harris’ boss, Lady Dant] would choose, and you’ve got to believe she would look great in it,” Beavan said.

A similarly unusual costume design puzzle emerged for Beavan later in the film. When Mrs. Harris ends up staying longer than expected in Paris, she borrows dresses from her new friend André, whose sister is conveniently out of town. Mrs. Harris raids the sister’s closet, which meant that Beavan had to once again design a series of dresses serving dual purposes: to bring to life a character we never see, and to add a new flavor to Mrs. Harris and her adventures.

Beavan’s first step was to create a history for the unseen sister and answer a series of questions. “Number one, where is she? She hasn’t taken her clothes. Has she gone to a nudist colony? Who is this girl who’s the sister of an existentialist? Maybe she’s a little studious.” When Beavan first put the sister’s clothes on Lesley Manville, she realized she had a problem. “When we dressed Lesley from top to bottom, she just looked like Lesley Manville in another costume,” Beavan said. She realized that by keeping Mrs. Harris’ own shoes and stockings – which made sense since the sister’s shoes probably wouldn’t fit her – the transformation was more successful. “Then she looked like Mrs. Harris dressed in someone else’s clothes.” 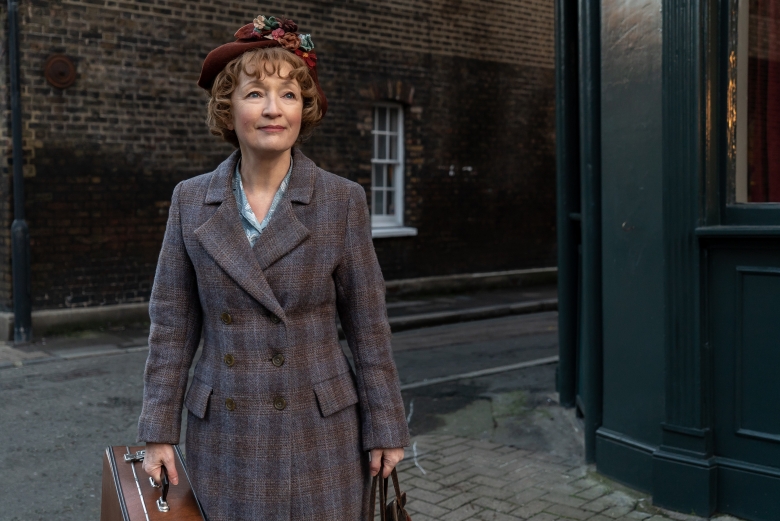 For Mrs. Harris’ own clothes that she wears before her delay in Paris, Beavan didn’t have to do much research. “I come from that period,” she said. “A little later maybe, but I absolutely remember 1957 and my mother and the other people around us and the class differences. I backdated her slightly to push the fact that Paris was very much the fashion place and London wasn’t, and also because people didn’t just throw away clothes and move on because fashion changed, especially not the working class. Mrs. Harris would have kept a dress for ages; mended it, worn her apron over it to keep it nice, and if it finally wore out she would cut it into pieces and use it for patches or to make cushion covers or something.”

“I didn’t give her too many changes because she wouldn’t have much,” Beavan added. “Back then we only had three pairs of shoes: your indoor shoes, your outdoor shoes, and your gym shoes. It’s not like kids today who have four pairs of Crocs before they even start on the party shoes.” Most of Mrs. Harris’ clothes were vintage pieces from costume houses or secondhand shops, partly due to the film’s modest budget. Yet for Beavan, this approach was ultimately beneficial. “When you use secondhand clothes, they’ve got a life already,” she explained, adding that finding the right pieces with Manville was one of the great pleasures of the movie. “Working with the actors is what really gets my creativity going,” Beavan concluded. “That’s the job: supporting the actors with the clothes they wear.”
Click to expand...