Peacock has had a rough time with their original content. Outside of their nostalgic reboot of “Saved By the Bell,” the rest of Peacock’s original slate has failed to entice audiences — but that should change with the premiere of “Girls5Eva.” Though peddling in a similar sense of nostalgia — our collective love of girl groups and ’90s/early ’00s music — what creator Meredith Scardino does is tell a hilarious, boppy story of growing up but still desiring the comfort of the past.

In the late ’90s, the band Girls5Eva had a brief moment in the sun but weren’t famous “5Eva.” Over 20 years later former member Dawn (Sara Bareilles) discovers a a rapper has lifted a sample of their song, and believes there might be a career resurgence. But getting the band back together is only half the battle as they deal with personal issues — as well as the sad reality that society generally gives female singers a shelf life.

Nearly every element of this series is funny, sweet, and fresh. Though executive produced by “30 Rock” alums Robert Carlock and Tina Fey, Scardino’s tone feels similar to her work on Netflix’s “The Unbreakable Kimmy Schmidt” — albeit far more pointed. When we first see Girls5Eva during a “TRL” performance, golden-voiced Wickie (“Hamilton” star and Tony winner Renee Elise Goldsberry) talks about being discovered by a man in his hotel room, a hint of the dark background that surrounded most girl groups.

In fact, “Girls5Eva” is a fantastic critique of the girl group craze of the millennium, a plot that runs alongside a fun musical about the way the band can transition into being fully dimensional women. The four current members of the group — there’s a humorous explanation for why the band’s name isn’t current — are all going through different struggles, but immediately see a chance to reunite as a way to fix everything. For Dawn, she finds purpose outside of being a mother and working in her brother’s Italian restaurant; Summer (Busy Philipps), the breathy Britney Spears-esque member of the group, actually starts to enter adulthood; Gloria (Paula Pell) has recently lost her wife; while Wickie desperately wants the attention fame brought her.

The most perfect element within “Girls5Eva” is that cast, with absolutely no one feeling out of place. Bareilles obviously has proven her songwriting prowess before; a Grammy winner and multiple time nominee, she wrote the music and lyrics for the Broadway hit “Waitress.” But the series gives her a chance to be funny as the Tina Fey of the group (and it’s no surprise that Fey also makes a guest appearance at one point). During the group’s success Dawn dreamed of writing original songs, so when the group reunites but is unable to perform their own music it’s up to her to write them a hit that’s relatable. 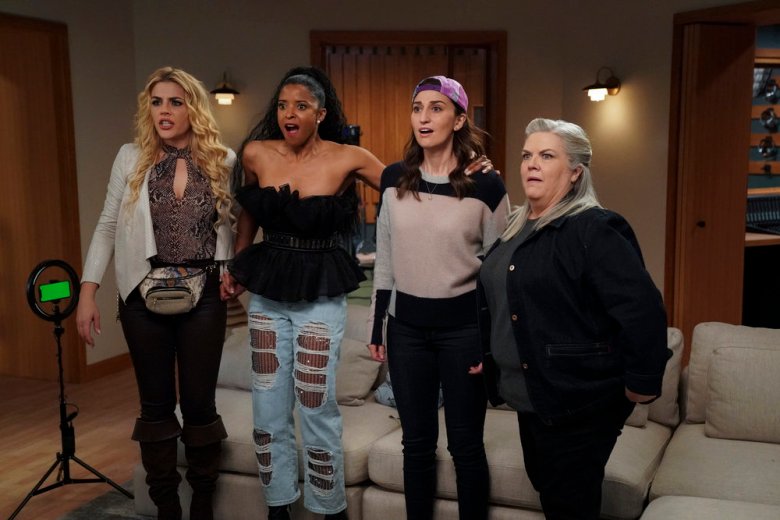 The songs assembled for the series feel like stuff you’d hear on the radio — and that you’ll eagerly want to grab on Spotify. The various Girls5Eva songs are cringeworthy, reminiscent of when we all learned the lyrics of “Semi-Charmed Life.” When the women sing the song “Dream Girlfriend” its lyrics include dated digs about how female comics aren’t funny and that they’re damaged because their dads are dead (but don’t worry, they had a cool uncle with a boat!) (Though it’ll be hard for any song to top “New York Lonely Boy,” an acoustic indie hit Dawn hears when she thinks of her son growing up an only child in the city.)

Bareilles is a solid straight woman for the series, especially because she’s surrounded by so many big personalities who could easily overshadow her. Goldsberry is a comic genius as the diva of the group; she has a remarkable way of taking a turn of phrase and creating a side-splitting joke out of it (“I get paid….by the goose!”) She’s also a great physical comedienne, as evidenced by a trip to the CVS that almost turns tragic. If Peacock were smart they’d start campaigning for Goldsberry to get closer to that EGOT.

Pell and Philipps are also wonderful as Gloria and Summer. Pell’s Gloria opens up the discussion of not just the sexuality of young women in these groups, but the emphasis on situating them as heterosexual. In flashbacks Gloria (played as young woman by Erika Henningsen), cringes and shies away from the moments where the girls are paired up with boybanders. Now an adult, Gloria overcompensates by losing herself in work to the detriment of her relationship.

Because of that, she bonds with Summer, who lives in a fantasy world with her husband, Kevin (Andrew Rannells) whose running joke is that he’s clearly gay. Philipps is also funny as the ditzy Summer, but instead of doing a series of dumb blond jokes there’s more of an examination into how the band forced Summer to rely on her sexuality. Like Goldsberry, Philipps also has fantastic facial reactions and her Girls5Eva flashbacks will easily make you remember all the half-naked women you saw on MTV whose job was to add a breathy phrase to the end of the stanza.

“Gonna be famous 5Eva cause 4Eva’s too short” is right. “Girls5Eva” always feels too short because you’re laughing at everything packed into the episodes. If you grew up following the teen music scene during the new millennium you’ll find everything you loved (and a bunch of stuff you missed) in the series. It’s a loving tribute to the music we loved — and the themes we’ve hopefully moved away from.

“Girls5Eva” is available to stream on Peacock.
Click to expand...