The clock, as Zedd and Alessia Cara like to say, was ticking.

Jason Sudeikis noticed it — how could he not, when shortly after his cast and producers gathered on stage to accept their second consecutive Emmy for Outstanding Comedy Series, he turned to thank the Academy and uttered the immortal words: “Wait, we just got here! And we’re down to 30 seconds.”

But it wasn’t just winners crowned near the end of Monday’s brisk and bizarre ceremony that faced the teleprompter’s wrath. Matthew Macfadyen took note of the night’s swift dismissal music by raising his golden statue slightly and smiling in wistful remembrance of an honor lost as he was still receiving it. “There it goes,” he said, before squeezing in a few more loved ones’ first names.

Yet the worst of it was reserved for one of the 2022 Emmys’ most anticipated victors: Jennifer Coolidge, whose decades of underappreciated work earned widespread reappraisal after her scene-stealing turn in “The White Lotus,” did indeed take home the Emmy for Outstanding Supporting Actress in a Limited Series, but rather than hear what the side-splitting comedian had cooked up for the ecstatic crowd, the producers cut her off not once, but twice. “Wait!” Coolidge said, when the first feared notes rang out. “Hold on! This is a once-in-a-lifetime thing!” But that plea was met with a louder, more aggressive melody, determined to oust her from a spotlight she had earned. Her microphone was cut off. Her words were lost.

And so she danced.

Coolidge’s triumphant shimmy managed to stand taller than a ceremony intent on cutting her off at the knees, as did surprise winner Sheryl Lee Ralph, who belted out the opening verse of Dianne Reeves’ “Endangered Species” in a jubilant embodiment of what an Emmy means to her that every single witness could feel, live, in the moment. Later, her “Abbott Elementary” co-star and showrunner Quinta Brunson towered over a faux-comatose Jimmy Kimmel as she accepted her Emmy for Outstanding Writing in a Comedy Series. Kimmel, who was dragged onstage by co-presenter Will Arnett, was pretending to be passed-out drunk, following yet another loss in the Variety Talk category. “Jimmy, wake up. I won!” Brunson said, as Arnett tried to reposition the host so the winner could reach the mike. But all he offered was a thumbs up, which a) isn’t enough, given Kimmel has now become part of a moment that should’ve been entirely Brunson’s, and b) came to represent the 2022 Emmy telecast as a whole: baring no ill will, but either uncooperative or uninterested in supporting a major honor.

Even for an award specifically designed for artists of the small screen, the 2022 Emmys felt far too small themselves. Executive producers Ian Stewart, Reginald Hudlin, Byron Phillips, and Jane Mun emphasized their top priority through the aggressive enforcement of their ticking clock. All awards shows try to keep things moving, mainly to appease an East Coast audience who are tiring by the minute, but not all awards shows are called out repeatedly, during all three hours of the broadcast, by some of the evening’s top talent — a tactic made even more infuriating given all nominees were asked to submit a list of people they’d like to thank ahead of time, so the chosen names could be displayed onscreen during an otherwise “heartfelt” and spontaneous speech. The chyrons worked out great, but why make room for heartfelt spontaneity only to then turnaround and demand a moving, memorable, human reaction in 30 seconds or less?

Still, more choices served to diminish a distinction that, to kick off the Emmys, Oprah Winfrey herself defined as “the most coveted television award on the planet.” The night began with a series of interpretive dance routines for rather random TV theme songs: “Friends,” “The Brady Bunch,” “Game of Thrones” — all that tied them together was identifiable opening credits’ tunes and the fact that none of them are on the air. At least following “The Brady Bunch” number, the original cast stood up and waved, but rather than build in surprises (if the Emmys want to be the Grammys, why not bring in big-name musical guests?) or build up anticipation for the actual nominees (which, one has to assume, is why some folks are watching in the first place), the non-monologue set the tone for a polite yet detached production. (I mean, come on: Weird Al Yankovic already did a musical bit on TV themes at the Emmys in 2014.)

As he’s done for nearly two decades on “SNL,” Kenan Thompson did his damnedest to elevate questionable material. His dance moves were solid. His presence remains amiable. His jokes — mainly, in a brief monologue delivered after the first set of winners were announced — were… fine. He made two digs at Netflix’s recent turmoil, two at Paramount’s sad vibes, and one at “Succession’s” lack of diversity (“[It’s] the only show that’s got three brothers and no brothers.”). Honestly, his best line came after the “Friends” dance filled with umbrellas, when he asked the audience, “Hey, have you ever seen ‘Living Single’? I think you guys would like it.” 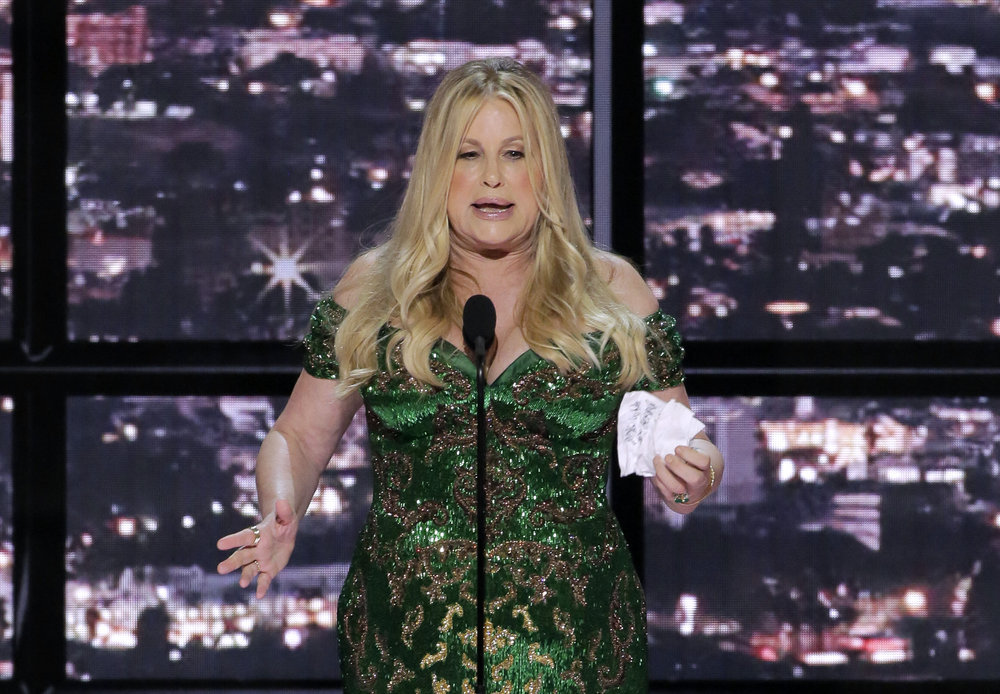 Jennifer Coolidge at the 2022 Emmys

That’s a joke made many times in many other venues, but Thompson wasn’t an obstacle the way the rest of the show proved to be; he was merely a sign of what NBC seemed to want out of TV’s biggest night: They wanted to make it 1997 again through science or magic. In 1997, no one would’ve blinked at an interpretive dance routine (not that they would’ve ever enjoyed it). In 1997, montages were still cool, and medical shows could still be revolutionary enough to deserve one. In 1997, a Kenan & Kel “Good Burger” reunion would’ve been given more than two seconds of airtime. (Granted, the movie would’ve only been a few months old, so maybe “reunion” is the wrong word.)

Most notably, in 1997, no one was arguing TV could go toe-to-toe with film when it came to artistic credibility — a regressive position the 2022 Emmys seemed eager to embrace. Rather than make time for speeches, the show made time for montages. Rather than find new, innovative ways to honor TV’s rising stars, it found new, innovative ways to integrate car commercials into the broadcast. (Thank you, Kia Telluride.) Rather than pay respect to the composers and/or music supervisors honored at last weekend’s Creative Arts Emmy Awards by selecting walk-up music related to each winner, someone thought it best to play “Shake Your Booty” as Jesse Armstrong took the stage for writing “Succession.”

The 2022 Emmys gave off big “who cares?” energy, whether it came from what the producers chose to include or who they chose to box out. Perhaps that shouldn’t be so surprising, even if it will always be disappointing. Awards shows are facing a steady ratings decline, along with everything on broadcast television that doesn’t involve throwing or kicking a pigskin. (The Emmys were held on a Monday because NBC didn’t want to sacrifice Sunday Night Football.) The clock is ticking, and the producers transferred their panic onto the night’s honorees. Desperate times may call for desperate measures, but desperation doesn’t have to be this damn boring.