The “English-language” distinction is important here as “Squid Game” is still the streaming service’s overall champ in both single-week and 28-day tallies. Netflix ranks shows and movies overall by their first 28 days; on that chart, “Dahmer” is already ninth (and damn close to eighth) all-time among English-language series. There is still lots of time left for “Dahmer” to climb up this chart: 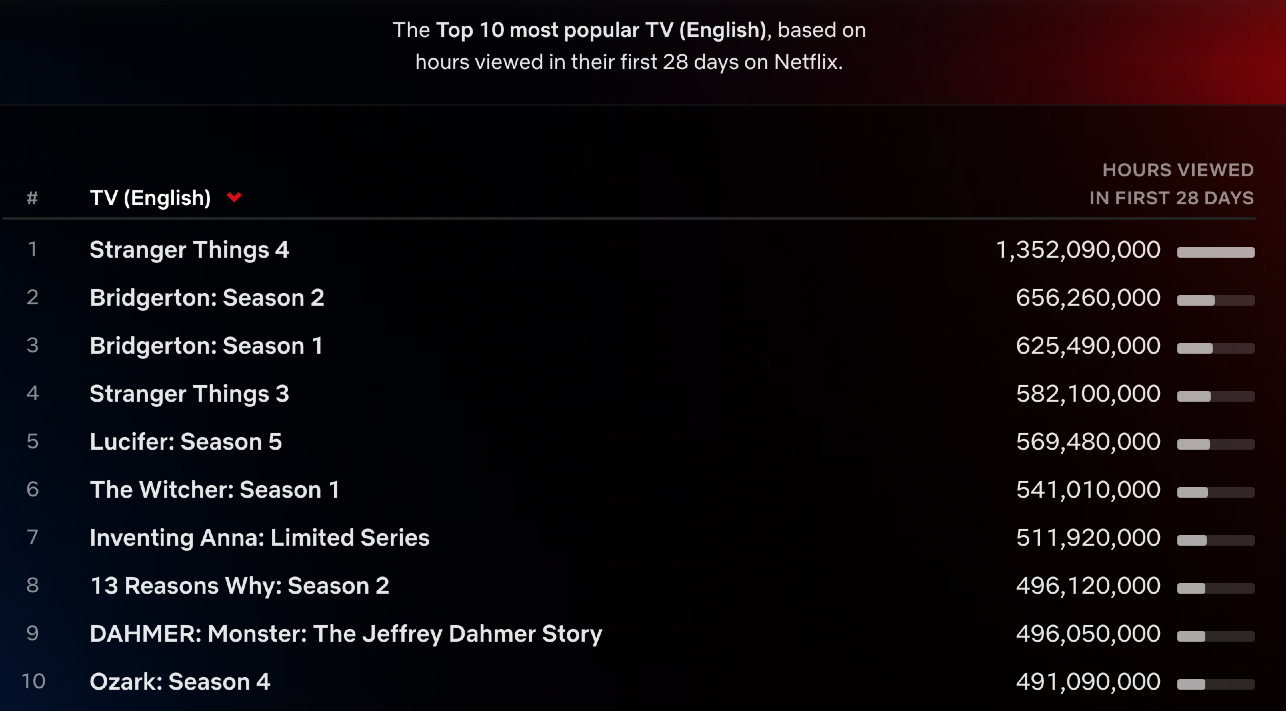 Seven days ago, “Dahmer – Monster: The Jeffrey Dahmer Story” shocked by delivering the biggest Week 1 results (196.2 million hours viewed) for any Netflix series (or film, for that matter) on record, English-language or otherwise. “Dahmer” debuted on a Wednesday, giving the Ryan Murphy and Ian Brennan drama starring Evan Peters a two-day head start on many other Netflix premieres. With some variation, the streaming service typically premieres projects on Fridays.

“Dahmer – Monster: The Jeffrey Dahmer Story” has renewed fascination with the Milwaukee, Wisconsin serial killer who dominated headlines in the early 1990s. With that comes scrutiny from those affected by Dahmer’s 17 murders. Since debuting September 23, the series has trended on Twitter with fierce and divided reactions to its use of fact and fiction to tell Dahmer’s story.

Also in the past week, “Monster” production assistant Kim Alsup called it “one of the worst shows I’ve ever worked on,” citing a racially troubling experience on the series.

Meanwhile, Anne E. Schwartz, the journalist who broke the Dahmer story and whose book inspired the series, called out numerous inaccuracies and clarified that “Monster” is “not a helpful representation” of the events. Schwartz pointed to fictional details related to Glenda Cleveland, who is played by Niecy Nash and situated as Dahmer’s next-door neighbor. In reality, she lived in the adjacent building, but here the character serves as a composite of Cleveland and Dahmer’s actual neighbor, Pamela Bass.

Rita Isbell, sister of Dahmer victim Errol Lindsey, said she refused to watch the show and was not contacted by the production team. Netflix also drummed up press scrutiny when it removed the “LGBTQ” streaming tag from the series two days after it debuted.

In addition to Peters, who doubles as an executive producer on the project, “Dahmer” also stars Richard Jenkins as Lionel Dahmer, Molly Ringwald as Shari Dahmer, and Michael Learned as Catherine Dahmer.
Click to expand...