The final word of Kristen Roupenian’s viral 2017 New Yorker short story “Cat Person” is a gut-punch, a fitting capper on 7,000-or-so words that alternate between the hilariously true and the painfully honest. As short stories go, Roupenian’s was a winner, a discomfiting tale that turned played-out romantic tropes (he’s awkward! she’s cute!) into something far richer and wiser. It follows the seemingly ill-fated and short-lived affair between college student Margot and older man (but not too much older) Robert as it dips from sweet to scary, awkward to downright creepy. For many women, it felt terribly, painfully familiar, and that it ended the way it did, with that single horrible word, was just perfect.

One small problem for the inevitable film adaptation: that ending doesn’t quite follow the typical expectations of a movie. More directly? “Cat Person” the story doesn’t have a “third act,” a pretty hefty ask for “Cat Person” the film. And while Susanna Fogel’s feature film version of the story is appropriately excruciating (this is a high compliment; mostly, it will set your teeth on edge and raise the hairs on the back of your neck, just as it should), its muddled, messy, and brand-new final act feels at odds with Roupenian’s story and the very emotions it raised with its readers.

Adapted for the screen by “Masters of Sex” creator Michelle Ashford (who certainly knows a thing or two about the ins and outs of human sexuality, power dynamics, and interpersonal communication), Fogel’s “Cat Person” boasts a strong start. College sophomore Margot (“CODA” breakout Emilia Jones) is wiling away another evening working the concession stand at her local arthouse theater when the awkward (but maybe cute?) Robert (“Succession” star Nicholas Braun) arrives, offering the bored Margot a chance to flirt, if only to break up the monotony of her night. Soon enough, he’s back, asking for Margot’s number and giving the whipsmart (but not street-smart) woman a new curiosity to occupy her time.

But even Margot is hip to more pressing concerns, like, oh, the general anxiety of being a woman in this world. And as she walks back to her dorm, all alone in the night, her best pal and roommate (the always-welcome Geraldine Viswanathan, taking on a role expanded from that of “Tamara” in the short story) chatters to her on the phone about being safe, getting home in good time, trying not to be murdered, etc. LOL! Isn’t being a lady fun?

It is, and it also isn’t, and that’s just one of the many binaries that exist in this story — the line between cute and weird, alluring and tragic, adventurous and just plain scary — and that Fogel ably examines in the film. Jones and Braun also make for keen casting, with Jones winningly working the line between Margot’s relative innocence and her tricky desires, and Braun turning creepy when you least expect it (again, another compliment). 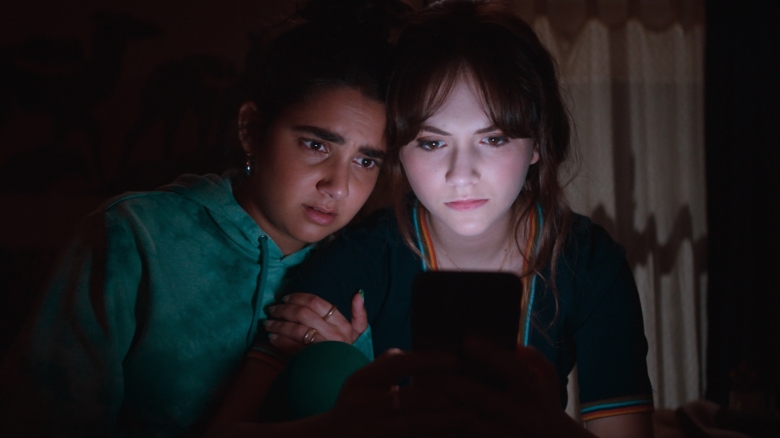 Like Roupenian’s story, much of “Cat Person” the film hinges on the early, giddy text exchanges between Margot and Robert. They’re zippy and fun and flirty, so much less awkward than their in-person interactions, and while it’s initially hard to grasp why Margot is even giving this guy the time of day, their textual chemistry makes a fine case. Fogel shows texts in various formats, both with on-screen chat bubbles and glimpses of Margot’s actual phone. We hear her tapping out messages, we eagerly await the ding of an incoming text, we’re right there with her. That’s how it should be.

Fans of the story will not be disappointed by the bulk of the film, which adheres closely to Roupenian’s text (never fear, Robert’s horrifyingly bad kissing is very much here, even more disgusting and hilarious in the hands — mouths? — of Jones and Braun). Even before the film hits the skids on its final act, there’s more padding on offer, and understandably so (the film clocks in at just under two hours, and it rarely drags).

Some of it is more funny than necessary (like that Taylor runs a feminist subreddit called “The Vagenda”), while some is oddly undercooked (Margot’s work alongside a beloved professor, played by Isabella Rossellini, feels like a limp attempt at adding an anthropological element to the whole thing). Other expansions add important context, like a trip home that sees Margot’s mother (played by a wonderfully brittle Hope Davis) offering up romantic tips to her daughter that seem cogent and later prove disastrous.

The portrayal of Margot’s inner monologue — a key element of the story — is similarly handled in ways both good and bad. Quick-cut fantasy sequences in which Margot is actually attacked by Robert feel jarring and unnecessary, mostly because Jones’ solid performance already suggests her terror at appropriate moments and because Fogel has a damn fine time shooting other scenes with a horror-film feel (also aided by Heather McIntosh’s nerve-shredding score). A more complex sequence in which Margot imagines Robert unpacking his relationship worries to a therapist (Fred Melamed) works better, but nothing is as good as Margot talking to herself (literally) during an unnerving sex scene.

It’s that entire sequence that most directly showcases the strengths of this adaptation. And while bringing a second Margot into the picture might sound like the easy way out, the best part is, it’s not. It’s the much harder way, the much more painful, the much more honest. As Margot (and we) survey Robert’s house (no cats, despite his endless chatter about them, but plenty of empty McDonald’s cups and one hilariously placed “Minority Report” DVD), even those unfamiliar with the short story will know where this is headed.

The real drama? How Margot feels about it, how she tries to talk herself into an experience she does not want to have, all while Robert continually shows himself to be (at best!) a very bad dude indeed. It’s the finest parts of “Cat Person,” both story and film, distilled to a powerful essence.

Less successful is the film’s final act, which attempts to tie up all sorts of loose ends, answering questions that range from the mundane (does Robert really have cats?) to the unnecessary (is Robert really a bad dude?), all of them sewing up tight a story that hits much harder when it’s allowed to be more open. Is Robert really a bad dude? Isn’t that the point of this entire story? That Ashford attempts to answer it is odd enough, but the script folds back on itself so much that it, weirdly, becomes too muddled to land any of the hard and fast observations it was trying to make. What a bummer way to end it.

The final word on “Cat Person” the film? Not nearly as biting and perfectly pitched as the story that inspired it: It’s good…enough. It could have been more.

“Cat Person” premiered at the 2023 Sundance Film Festival. It is currently seeking distribution.
Click to expand...