Tony Stark in “Captain America” asked, “Can you help a brother out?” For “Bros,” it turns out that, as was hoped, the help came from PVOD rentals.

The groundbreaking studio gay rom-com failed to gross $12 million in U.S./Canada results. Its failure generated much social media chit-chat, making it one of the best-known recent flops.

But it is the kind of release that benefits from Universal’s PVOD release policy (at $19.99) for most films after the third weekend: strong niche appeal, older audience, decent reviews, with an interest that might have been heightened by post-opening negative media about its performance.

“Bros” is either No. 2 (at Vudu, calculating by revenue) or No. 3 (iTunes and Google Play, which rank by transactions). That’s not sensational, but actually quite good for a studio release that fared this poorly in theaters. Whether the studio erred financially by not skipping theaters and the high marketing cost (likely above their ticket sales, from which Universal might earn 50 percent) is uncertain. But to make a dent in their investment ($22 million before marketing), their VOD results need to be maximized.

How successful it is will be a guessing game since revenues are never announced. But a high placement across the board, as “Bros” has done, means they are collecting around $14 per transaction at some volume. How long it can maintain a presence at the highest price is more important.

Some hint as to its performance can be determined by its No. 2 Vudu slot. It was topped by “Bullet Train” (Sony/$5.99), which reduced its price. To take No. 1 there with revenue as the basis, the Brad Pitt-starrer had to have more than triple the action that “Bros” did. “Bullet” also is No. 1 at Google Play.

“Top Gun: Maverick” (Paramount/$4.99) took No. 1 at iTunes, continuing to thrive as its cost goes down. All three charts had “Maverick,” “Bullet Train,” and “Bros” in their respective top three spots, though ordered differently. “Minions: The Rise of Gru” was the only other title to make all three lists.

The second new entry, though with only a No. 10 position at Vudu, was “Batman and Robin: Battle of the Super Sons” (Warner Bros. Discovery/$14.99). It’s the latest in their ongoing series of animated spinoffs in the prime D.C. franchise. Of note: WBD released this digitally and on Blu-Ray/DVD, but not yet on HBO Max. The delay is consistent with the studio initially prioritizing direct revenues for new content rather than favoring their streamer. 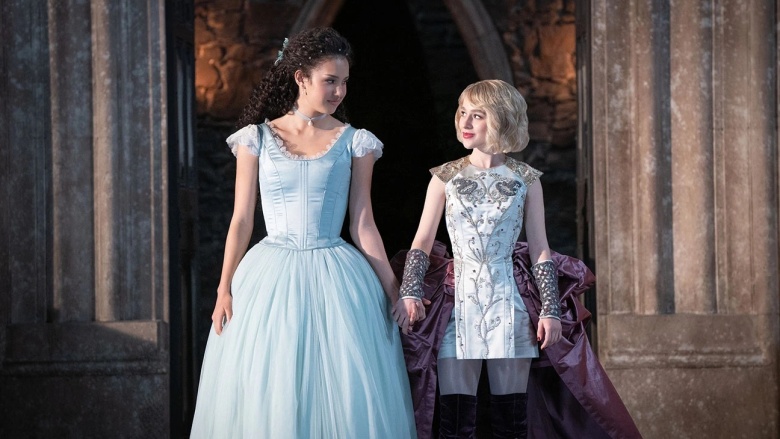 “The School for Good and Evil”

Netflix is original- and Halloween-oriented heavy this week, with three new releases topping their list. “The School for Good and Evil,” no doubt aided by the original novel’s 2.5 million worldwide sales, is No. 1. The fantasy set in an all-girls school was directed by Paul Feig (“Bridesmaids,” “Heat”) with a supporting cast that includes Charlize Theron, Kerry Washington, Patti LuPone, and Cate Blanchett’s voice. If that gets your attention, be aware that it runs nearly 150 minutes, which so far seems not to be reducing the interest.

No. 2 is “The Stranger,” an Australian thriller starring Joel Edgerton that premiered at Cannes in the Un Certain Regard section. “The Curse of Bridge Hollow,” last week’s No. 1, remains strong at No. 3. “The Luckiest Girl Alive,” No. 1 before that, is fourth. All these films look to have a better response than the much better-known “Blonde,” which had three days as No. 1 and only lasted a little over one week.

It’s rare for a Netflix film to return to popularity after its initial release. But “Hubie Halloween” with Adam Sandler is No. 10. Sandler remains the streamer’s most successful cinematic creative partner.

iTunes and Google Play rank films daily by number of transactions. These are the listings for October 24. Distributors listed are current rights owners. Prices for all titles are for rental.

Most viewed, current ranking on Netflix’s daily chart on Monday, October 24. Originals include both Netflix-produced and acquired titles it initially presents in the U.S. Netflix publishes its own weekly top 10 on Tuesdays based on time viewed.