Hauser has played his fair share of unlikable people but, for him, Hall challenged him at every turn. It was one thing to play a real character, but another to confront the dark demons at Hall’s core, as well as what series creator Dennis Lehane had conceived of the character Hauser would play. Hauser told IndieWire via Zoom that while he doesn’t usually take characters home with him, that might not have been true here.

Hauser went on to discuss working opposite Taron Egerton, why playing Hall was a challenge, and the episodes coming up that he struggled to perform. “I have a very gentle spirit and I don’t like to let darkness in,” he explained.

This interview has been condensed and edited for clarity.

IndieWire: What initially jumped out at you about Larry Hall?

Paul Walter Hauser: I was interested in the writing because I think Dennis Lehane is really, really talented. There are a lot of good dramatic writers, but what he does is he gets invasive into people’s psyches, the dark places of normal people and the normal places of dark people. [It] was attractive to see how intelligently and emotionally woven the story was. On top of it, I was a big fan of “Rocketman.” Taron is one of those exciting new actors, like Adam Driver and Jesse Plemons, where everything they do becomes a must-see project.

Did you engage in a research process?

It’s not worth over-analyzing. I just tried to honor what Dennis was writing, what he wanted to do with that character. So much of it was on the page. When I was shooting this project I was going through a pretty dark personal phase of my own. So, I don’t think it would have behooved me to research serial killers. More than anything, it was about researching yourself and saying, “Well, I don’t kill people, and kidnap people. But what do I have in common with this person?” What I share with Larry is the same desire to feel seen, occasional bouts of depression, and loneliness, and dark thoughts. That’s pretty human. That’s pretty universal. And then you simply act when it comes to the scary stuff. You’re not trying to inhabit any more than you have to.

Your vocal cadence in this series and your facial reactions are just so unique. How did you get those down?

The vocal choices are based on real life. I heard 12 seconds of composite audio of Larry Hall. I don’t sound exactly like him, I sound close to him. I tried to honor the real voice but then there’s so much I’m doing that people just won’t really know why I’m doing it. I know why I’m doing it, but they probably don’t. The scene might be about Jimmy trying to extract information from Larry and they’re eating a sandwich, but that scene is about seven other things for me that aren’t in the scene. [It’s] what I call mental multitasking. [It’s] what happens that gives people this thing of, “I think I’m following his emotions, but I can’t really predict them.” That leaves them with a sense of unease, and equal parts fascination and confusion, which is what I wanted to do.

It’s also like, unfortunately a lot of kids grow up with parents who have drinking problems, or anger issues, and when they come home from school they don’t know which version they’re getting of a parent. I think Jimmy doesn’t really know what version he’s getting of his cellmate here, and that’s scary. 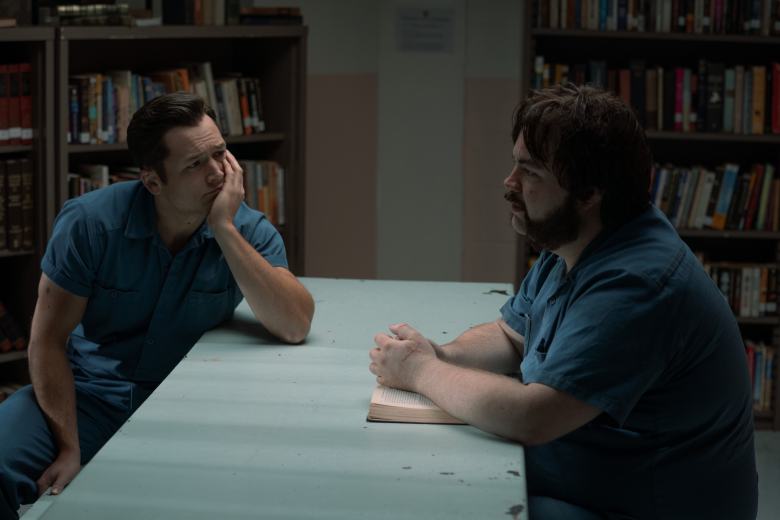 Was it easy to put this character aside at the end of the day or when you finished the series?

I was in a bad place, emotionally, before I shot the show and then it got worse as I was shooting the show to where I had to start getting sober about a year ago, July of last year. I was telling people I wasn’t taking the character home. I was like, “Nah, I’m fine.” But I don’t know if that’s true. I’m still working through some stuff, but not to sound over the top [but] I’m celebrating nine months of sobriety this month. I love the show. I’m grateful to be on the other side of it. And I have what matters the most, my wife and my son, and I have a piece of art that I’m pretty proud of.

Was there a moment you realized this show was different than others you’d encountered?

I had a moment offset. Taron and I were having a conversation at a bar early on when we were shooting Episode 1 and 2. He said to me, “This is our set. We’re in charge. We’re running the show.” When he said it, I’m like, “Okay, he’s had a couple drinks,” but it’s me not taking ownership on the authority I have as the co-lead of a show, not in an abusive manner but in a way of being a confident leader on the show. That’s the first time anyone said anything like that to me. I always feel like a freshman surrounded by seniors, and Taron looked at me and was like, “Dude, you’re a senior, bro. You’re on the varsity squad,” and that feels really good. That helped my confidence.

As far as what differentiates this show from other shows or movies I’ve done, it was hard work. Some things I do are not that hard. Playing a dummy in a comedy like “Cobra Kai,” or even being a dumb racist dude in “Black Klansmen,” that’s not that hard to play. But playing Larry Hall, the closest thing I’ve done to that is “Richard Jewell,” where you’re the leader and you have to do some emotionally difficult things. You have to trace the arc of your entire story while shooting out of order. You have to know how the character feels in that specific moment and have continuity of thought. Continuity of thought can be very tough. I can walk into the kitchen and forget why I went into the kitchen. If I forget why I entered the room three minutes after going in then [it’s] all the more difficult to memorize lines and keep the continuity of thought in the scene.

Was there a moment that was challenging for you to pull off?

There were two things, one in Episode 5 [and] one in Episode 6. In Episode 5 I have to say some things that I hate saying. I’m okay with saying them [but] had they asked me to portray some of what I talked about I don’t believe I would have done the role. I have a very gentle spirit and I don’t like to let darkness in, to that degree.

Episode 6 I say and do something that took over…I won’t say something untrue or over the top, but when I watched it for the first time with Dennis Lehane I left his house and had to call my sponsor and my therapist. I was just crying. I didn’t know why I was crying. Usually you can trace the origin of thought for why you’re tearful, couldn’t do it. I chalked it up to I wasn’t watching myself while watching the one scene that I’m talking about, and it scared me. It scared me like, “Am I a bad person for inhabiting that? Am I evil? Am I ugly, and disgusting, and cruel?” It’s hard to look at.

news How to Make a Mel Brooks Comedy in 2023: Nick Kroll Explains