A stunning debut that develops with the gradual poignancy of a Polaroid, Charlotte Wells’ “Aftersun” isn’t just an honest movie about the way that we remember the people we’ve lost — fragmented, elusive, nowhere and everywhere all at once — it’s also a heart-stopping act of remembering unto itself. Here, in the span of an oblique but tender story that feels small enough to fit on an instant photo (or squeeze into the LCD screen of an old camcorder), Wells creates a film that gradually echoes far beyond its frames. By the time it reaches fever pitch with the greatest Freddie Mercury needle drop this side of “Wayne’s World,” “Aftersun” has begun to shudder with the crushing weight of all that we can’t leave behind, and all that we may not have known to take with us in the first place.

When Sophie (remarkable newcomer Frankie Corio, real as can be) thinks of her father, she thinks of the Turkish holiday they went on together in the late ’90s. That was the trip when she turned 11, and Calum — played by “Normal People” breakout Paul Mescal, who makes a premature leap into dad roles with tremendous poise and a triggering sense of parental mystery — turned 32. Some kids at their rundown hotel assumed they were siblings, and now they would be about the same age.

As an adult who we only see in glimpses, Sophie rewatches the MiniDV footage that she and Calum recorded on that vacation, eagerly scanning the standard-definition video in search of the clues that a child might have missed. Clues to what? It doesn’t matter.

The eerily objective home videos and the semi-imagined 35mm scenes that “Aftersun” wraps around them both suggest that Calum was struggling with a demon of one stripe or another, and that he was doing his best to hide that struggle from his daughter during their too-rare time together, but Wells denies us the details. Like Sophie, all we can do is sift for meaning amidst the rubble and hope to fill in the haunted spaces between the man she knew and the man she lost. 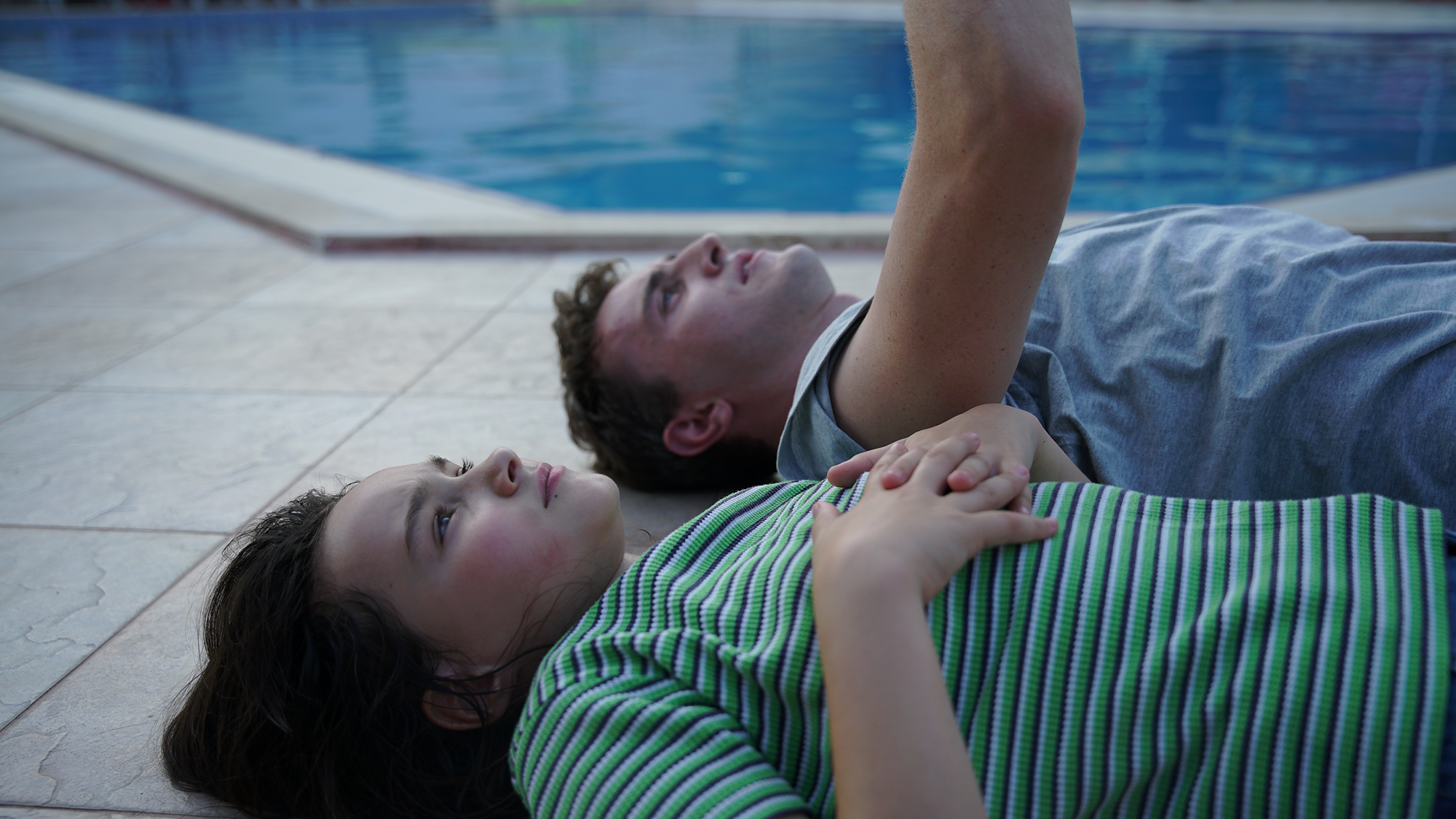 We tend to think of memories as crystallized moments of time, loosely strung together along the trellises of a drooping chandelier somewhere deep within our mind. And yet, personal experience tells us that our pasts are composed from an infinite swirl of different sources — real and invented — each of them crudely sewn together with the same desperation that our sleeping brains might arrange a billion random neurons into a semi-coherent dream.

Some of those sources are soft as ghosts, and likewise change shape in the shadows. Others are much harder, as still and tactile as a rug on the floor. Both can be evocative, but neither are enough to connect all the dots; not when you’re trying to re-trace someone you loved from the vague silhouette they left behind.

All these years later — an entire lifetime since the tan she got in Turkey faded back into freckled white — Sophie has only grown more desperate to see what the home videos from that trip will never show her. As if by osmosis, we intuit that she’s haunted by the feeling that some ineffable part of herself will always remain just out of reach, like the patch of skin between her boney pre-teen shoulders where Calum had to apply the sunscreen for her. We sense that she re-watches the camcorder footage in the desperate, keening hope that her dad might be able to show it to her in time to save her from it. And we sense that she does this because she never saw him again.

Wells’ ingenious construction allows “Aftersun” to unfold from a dual perspective that seems to filter it through the eyes of an adult and a child at the same time. We look for discrepancies, scanning the screen for answers to questions that we don’t even know to ask yet until even the film’s most banal images seem rife with secrets. Wells’ camera sometimes lingers on her characters during the kind of private moments when they suppose no one can see them, as if the film itself is goading us into assuming the worst. Gregory Oke’s fuzzy and tactile cinematography suggests a more sensitive read, its gossamer textures recalling the work of Lance Acord in a movie that often feels like a platonic riff on “Lost in Translation.”

Calum has a cast on his arm, but claims that he doesn’t remember how he hurt it. He calls Sophie “poppett,” and talks to his daughter with a guarded intimacy that makes it hard to say if he’s trying to keep her safe from the world or protect her from himself. Calum smokes on the balcony of their hotel room after she falls asleep, standing on the other side of a glass screen door. Sometimes he practices tai chi when he’s in the room by himself, his body obscured from the camera by a bathroom wall. At one point we see him spit at his reflection in the bathroom mirror. Is this what he was doing when Sophie was out making silly little videos on her dad’s camera?

Sometimes Sophie wears a “NO FEAR” hat, just one of the many impeccable period details in a film so precise about its point in time that it seems to take place at the exact moment when the “Macarena” was transitioning from “best part of the party” to “begrudging obligation” (a cringe-inducing karaoke scene in the second half of the movie is set to a period-appropriate track too perfect to spoil). Sophie plays with a group of older kids she meets at the pool and clearly delights in the thrilling autonomy of doing older kid stuff, but she’s never the least bit disinterested in hanging out with her dad.

There’s so much about Calum that she’s desperate to understand without asking, so we hang onto his every word in much the same way. We eavesdrop on his phone call with Sophie’s mother in order to figure out that they’re separated but on sweet terms, we listen as he talks (flirts?) with a scuba instructor, and we dissect the tone of his voice when he talks about “the pretty teacher” at Sophie’s school to hear if that sounds as honest.

Sophie jumps at the rare moments when Calum reveals himself to her, filing away precious bits of information for later that week, unaware that she’ll be holding on to them for decades longer. A pained confession about forgotten birthdays pays off several times over, leading to an indelible fade-out that crystallizes how this immensely powerful movie sneaks up on you in plain sight.

Some of that power can be credited to the masterstroke of how Wells ties her story together — “Aftersun” arriving at a sublime ending that exists in a liminal space between memory and imagination that every viewer will have to locate for themselves — but none of it would be possible without the real and instant sense of intimacy that she helps create between her two lead actors. Hardly a single moment feels didactic or instructive or reverse-engineered from the movie that Sophie might want to make about this trip one day; even after watching “Aftersun” four times, I’m still not sure if time will help Sophie come to a better understanding of who her dad was, or if their holiday was the last age when they could possibly have been as honest with each other as they were.

Wells’ film is able to follow its characters through the strobe light of lost time because Mescal and Corio make it so tempting for us to complete their performances for them — to fill in the gaps with the same urgency that we might want to close our own. Few movies have ever ended with a more tempting invitation to do something impossible, but “Aftersun” is so unforgettable because of the agonizing beauty it finds in the futile act of trying.

I often think of the wonderful scene in which Sophie tries to interview Calum on camera, only for her dad to clam up and make her shut it off. “Fine,” she says, “I’ll just record it in my little mind camera.” She doesn’t know it at the time, but it’s a lens she’ll be looking through for the rest of her life; it’s where we look for the people we love when there’s nowhere else to find them.

“Aftersun” premiered at the 2022 Cannes Film Festival, and was reviewed from the 2022 Telluride Film Festival. A24 will release it in theaters on Friday, October 21.
Click to expand...