Why Should I Watch? At this point, there are fewer reasons not to watch AMC’s landmark drama than to give in to one of the greatest television series ever made. Hailed in its era with a boatload of Emmys and hearty praise from critics, “Mad Men” earned a resurgence of late as stay-at-home orders invited re-watches and, of course, thinkpieces on its sustained timeliness. The truth is there’s always a reason to write about “Mad Men” and never a bad time to watch it, again or for the first time, which brings us to our next point…

Bonus Reason: “Mad Men” is leaving Netflix on June 9. Yes, the reports are true, and no, Lionsgate has yet to announce a new streaming home for its coveted 92 hours of content. But fear not: “Mad Men,” in both its stark reality outlined by crisp black suits and the ethereal fantasies conjured through wafts of gray smoke, is available in all its glory on Blu-Ray, which is the better way to watch it anyway. It’s not hard to find seasons available for less than Netflix’s monthly subscription fee — seasons that can’t be taken away the next time “Mad Men” jumps to a new service. So invest now, thank yourself later, and while you’re waiting for the discs to arrive in the mail, check out these worthy distractions from the Netflix June TV slate: 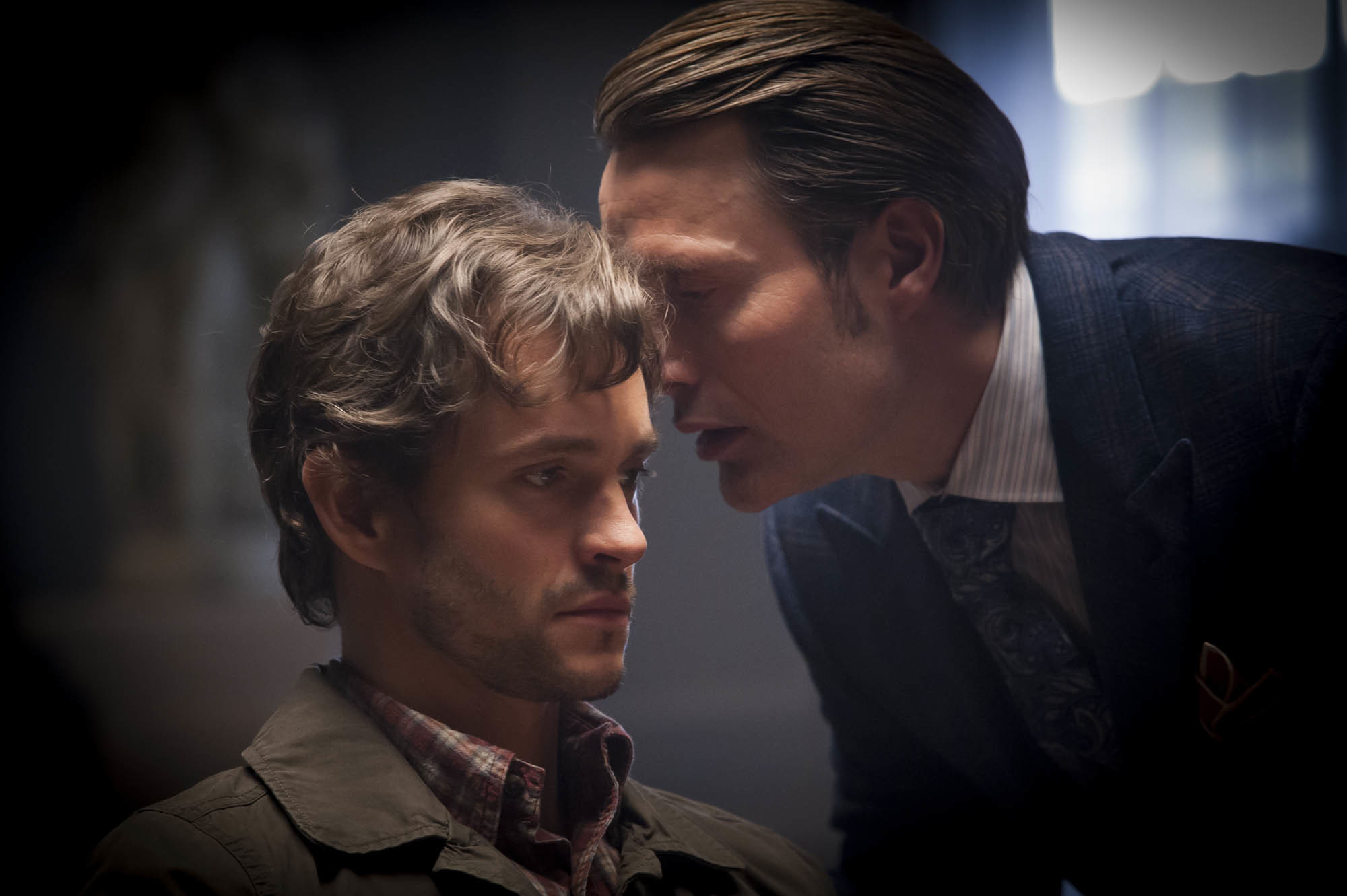 Why Should I Watch? Bryan Fuller’s wild series inspired by Thomas Harris’ Hannibal Lecter novels is an evocative, unsettling, and surprising adaptation at every turn. Those who haven’t watched but remember its original home — NBC — will be shocked at the level of carnage depicted in this very TV-MA drama; anyone a little too confidant in their ability to neutrally process televised horror stories may still awake to nightmares after a few psychologically penetrating episodes; and viewers who think horror is for genre fans only, well, they probably won’t watch this, but if they do, they’ll be set straight by the gorgeous production design and cinematography, not to mention the purpose behind each gruesome death. “Hannibal” engages with the curiosity, ubiquity, and, yes, the fear surrounding mortality in a way that’s both mind-bending and bone-chilling.

Bonus Reason: Mads Mikkelsen. For those only familiar with the Danish actor’s work in mega blockbusters like “Casino Royale,” “Doctor Strange,” “Rogue One,” and, most recently, the PS4 instant classic “Death Stranding,” “Hannibal” should open a lot of doors. Following up Anthony Hopkins’ iconic turn is no picnic, but Mikkelsen cooks up his own seven-course feast as the eponymous Dr. Lecter; while still dangerously charismatic and frighteningly intelligent, Mikkelsen’s “Hannibal the Cannibal” is stripped of any false-fronting propriety — he owns his secrets in a way that eliminates the civilized/uncivilized duality of Hopkins’ performance and ups the terror of watching the bad doctor at work. Mikkelsen doesn’t lower himself to slurping or gnashing when seeking to provoke his prey; he’s always hunting, always thinking, always manipulating Detective Will Graham (Hugh Dancy) like an all-powerful puppeteer. He makes “Hannibal” all the more unnerving, and he’ll make you want to seek out more great Mikkelsen movies, like “The Hunt,” “Arctic,” and, if you dare engage with Nicolas Winding Refn, a bonkers turn in “Valhalla Rising.” 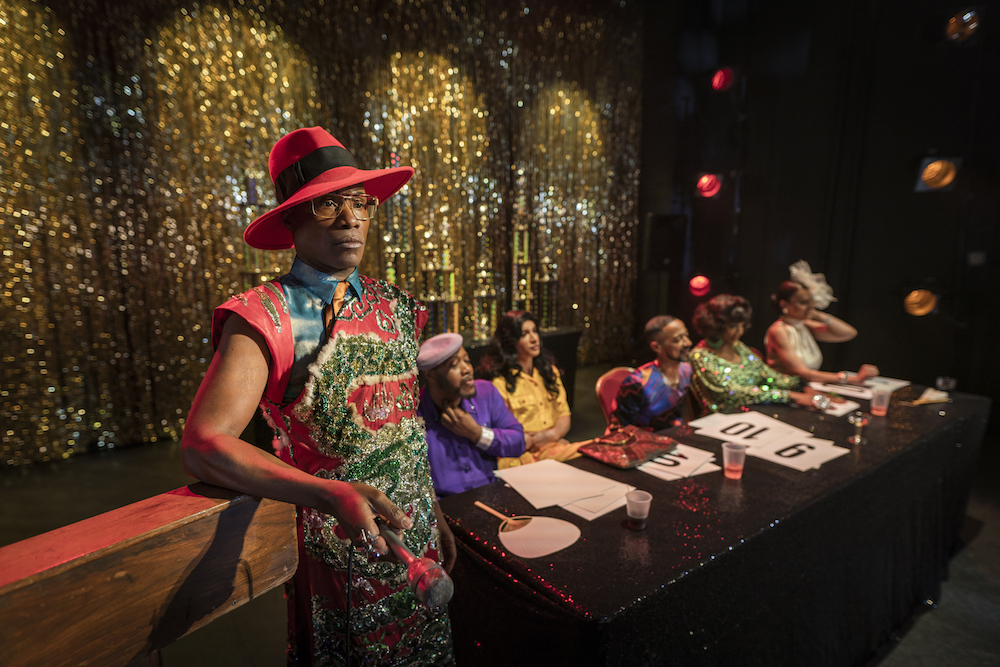 Why Should I Watch? Ryan Murphy’s FX drama takes the bolder is better approach in Season 2, using Madonna’s (contentious) emulation of ballroom culture as an ongoing framing device for personal stories centered on difficult, oft-ignored aspects of LGBTQ life. Jumping ahead to 1990, “Pose” shifts most of its drama from the warring houses that compete in nightly balls to more personal stories of the friendships and foes living within. Still, the balls are more raucous and magnificent than Season 1, the voguing is creative and captivating, and the arcs for Elektra (Dominique Jackson), Pray Tell (Billy Porter), and Blanca (Mj Rodriguez) shine a spotlight on the people who built the culture — as well as the sacrifices they made to make their world so sublime.

Bonus Reason: For Season 1, “Pose” received Emmy nominations for Costumes, Makeup, and Hairstyling — along with Casting, Lead Actor (Billy Porter), and Drama Series — which is an awards-centric way of saying, “This show looks great!” Just taking an hour or two to admire the artistry that goes into period NYC set design as well as the inventive ball scene is more than worth your time, especially as the glamour ramps up in Season 2. 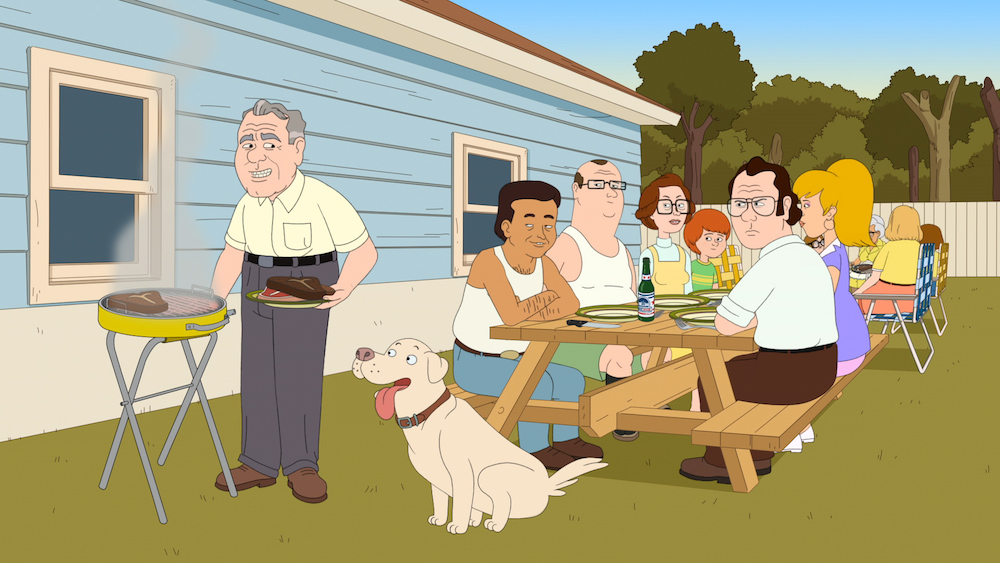 Why Should I Watch? If nostalgia is a drug too often used in entertainment to evoke a blissful, idyllic past, Bill Burr’s animated comedy is the antidote. Set in the 1970s, “F Is For Family” follows a lower-middle class nuclear unit who doesn’t embody the picturesque American dream many would prefer to remember, but a corrosive, fragile family that could fall apart at any moment. Frank (voiced by Burr) is a 40ish Korean War veteran who can barely hold down his job at the airport. When he’s not screaming about idiotic bosses, he’s screaming at his oft-mistaken kids, Kevin, Bill, and Maureen, or he’s trying to patch things up with his wife, Sue (Laura Dern), whose entrepreneurial skills are no joke, and thus a threat to Frank’s already weakening masculinity. There is, in fact, quite a bit of shouting in “F Is For Family,” as Frank is the parent who wants his kids to toughen up, but the series doesn’t embody his hard-nosed stance; it often takes the perspective of those suffering more than or because of Frank, and often pushes the insensitive lead character to change for the better or risk living through his worst nightmare: no job, no family, no chance at realizing the happiness he’s still chasing. “F Is For Family” can be a lot to take in, but the biting humor and stark honesty coalesce into an endearing portrait of family life few period shows want to embrace.

Bonus Reason: Uh, it’s funny? I know, I know — little described above sounds all that amusing, but “F Is For Family” will practically shock the laughs out of you. You may not even know what, exactly, provokes each particular chuckle; a joke of equal merit may catch you one minute and slide by the next. Still, the chortles are there, and they help balance out the series’ more abrasive elements. 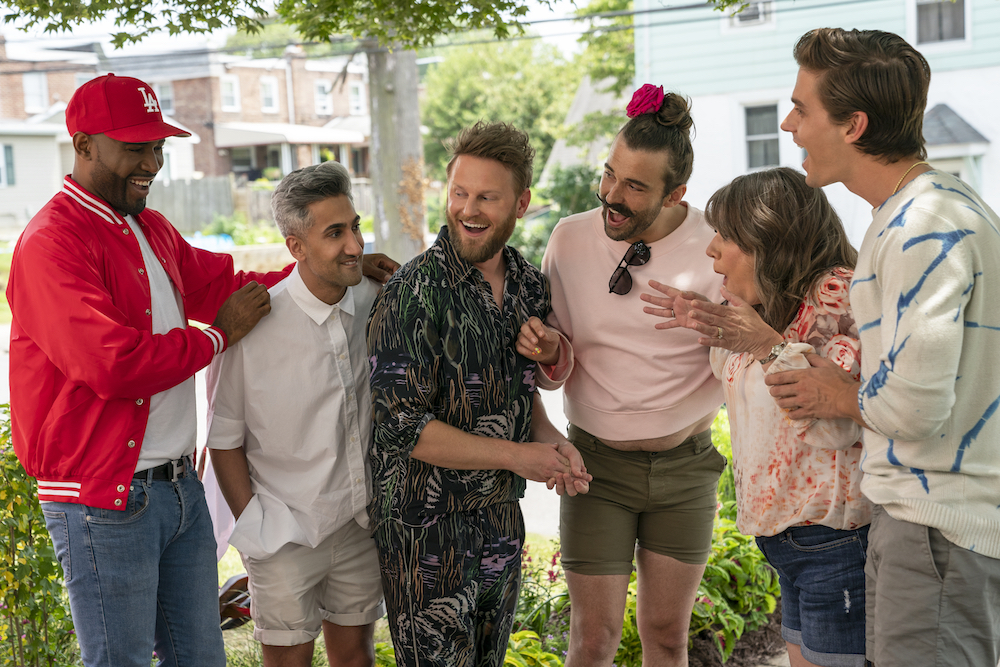 Why Should I Watch? One of Netflix’s early reality TV success stories, “Queer Eye” rebooted the Bravo original series with a new Fab Five, worldwide engagement, and fresh perspectives. So far, it’s earned seven Emmy wins (for Directing, Casting, and Structured Reality Program, among others), as well as PGA, DGA, and TCA recognition. If critics’ endorsements and awards aren’t enough for you, remember: It’s Pride month, and this new slate of episodes offers one more way to celebrate LGBTQ culture.

Bonus Reason: “Queer Eye” Season 5 heads to Atlanta and the surrounding area, where Antoni Porowski (Food & Wine), Bobby Berk (Interior Design), Karamo Brown (Culture), Jonathan Van Ness (Grooming) and Tan France (Fashion) will, per Netflix: “forge relationships with men and women from a wide array of backgrounds and beliefs often contrary to their own, touching on everything from LGBTQ rights and social commentary to how to make the best farm-to-table guacamole and more!” Entertaining and informative, “Queer Eye” offers an engaging escape without the guilt of certain other Netflix reality programs. 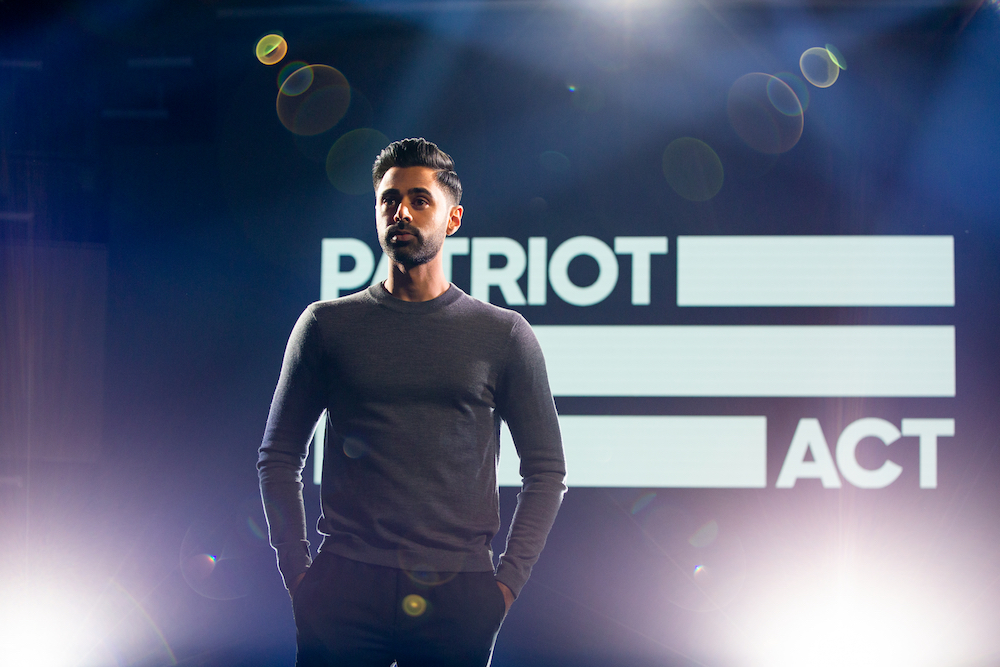 Why Should I Watch? Like so many late-night and streaming talk show hosts faced with a scaled-back production, Hasan Minhaj had to take a little time to reconfigure his Netflix series, “Patriot Act.” The expansive stage is gone, but the full-scale video overlay remains, as does Minhaj’s full-body delivery that gives the series so much extra energy. So far, the 20-minute episodes have tackled “How Coronavirus Broke America,” “The Legal Marijuana Industry Is Rigged,” and “What Happens if You Can’t Pay Rent?” With an onslaught of world-shaking news dominating headlines, there’s plenty more to come, and Minhaj has proven a clever, discerning voice over his 18 months with “Patriot Act.”

Bonus Reason: With everything [flails arms wildly] going on and plenty of people still staying at home as much as possible, it’s often tough to choose what to do with your time — research, donate, and take what actions you can first, of course, but quick doses of curated news programs can be a huge help in sorting the madness. “Patriot Act” packs a lot into its brief runtime, making it a good resource for anyone who may be winded, but wants to stay informed from fresh perspectives. 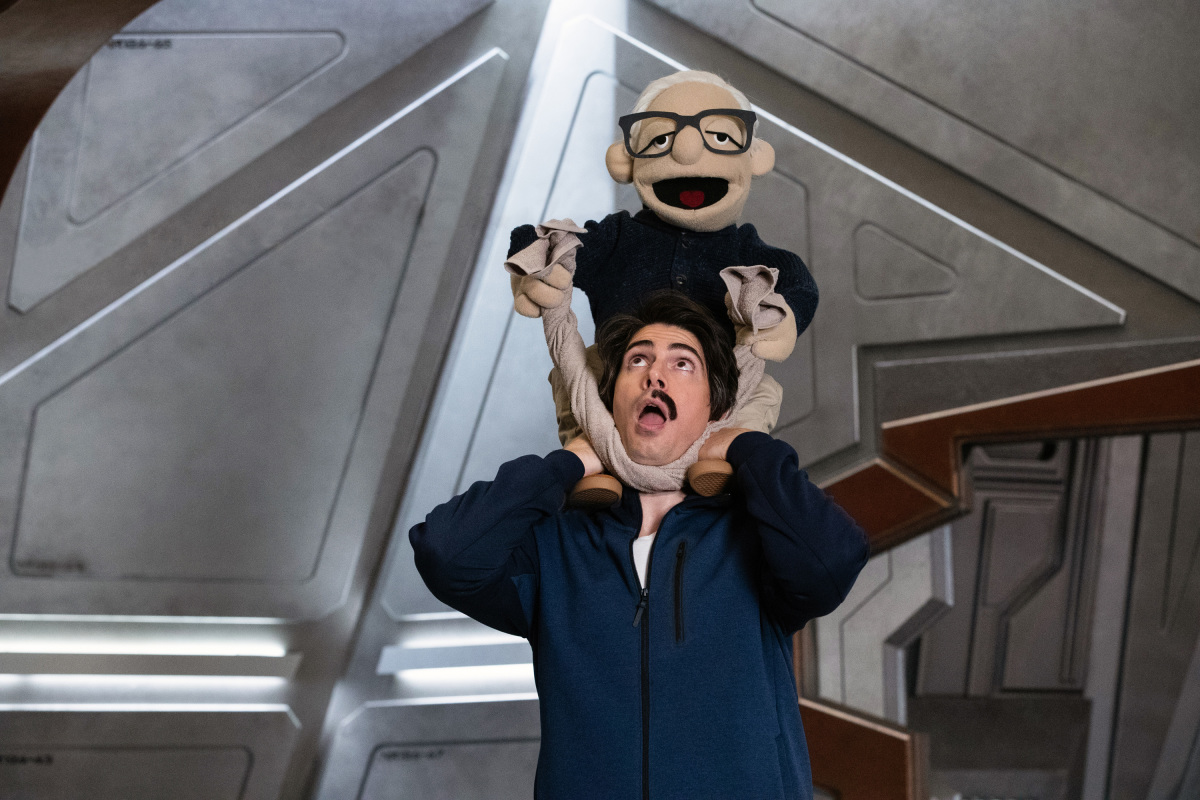 Why Should I Watch? The CW’s cult favorite superhero series is like the anti-“Mad Men”: So silly and so delighted by its own silliness, the show just kind of floats into the sky, like a blue, big-eyed, bundle of joy — sure, that can seem alienating at first, even terrifying, but if you’re looking for a way to jolt yourself out of your “Mad Men” obsession, this would do the trick.

Bonus Reason: People are seriously obsessed with this show. Some have actually co-opted a hyperbolic slogan to express their fanatic enthusiasm — “it’s the only good show on TV” — a slogan I first saw used to describe “Succession,” which makes a much stronger case for itself. While I can’t and won’t go that far with “Legends of Tomorrow,” such exuberance around any series is worth investigating, and a nice reminder you don’t always have to wait seven seasons to find happiness. 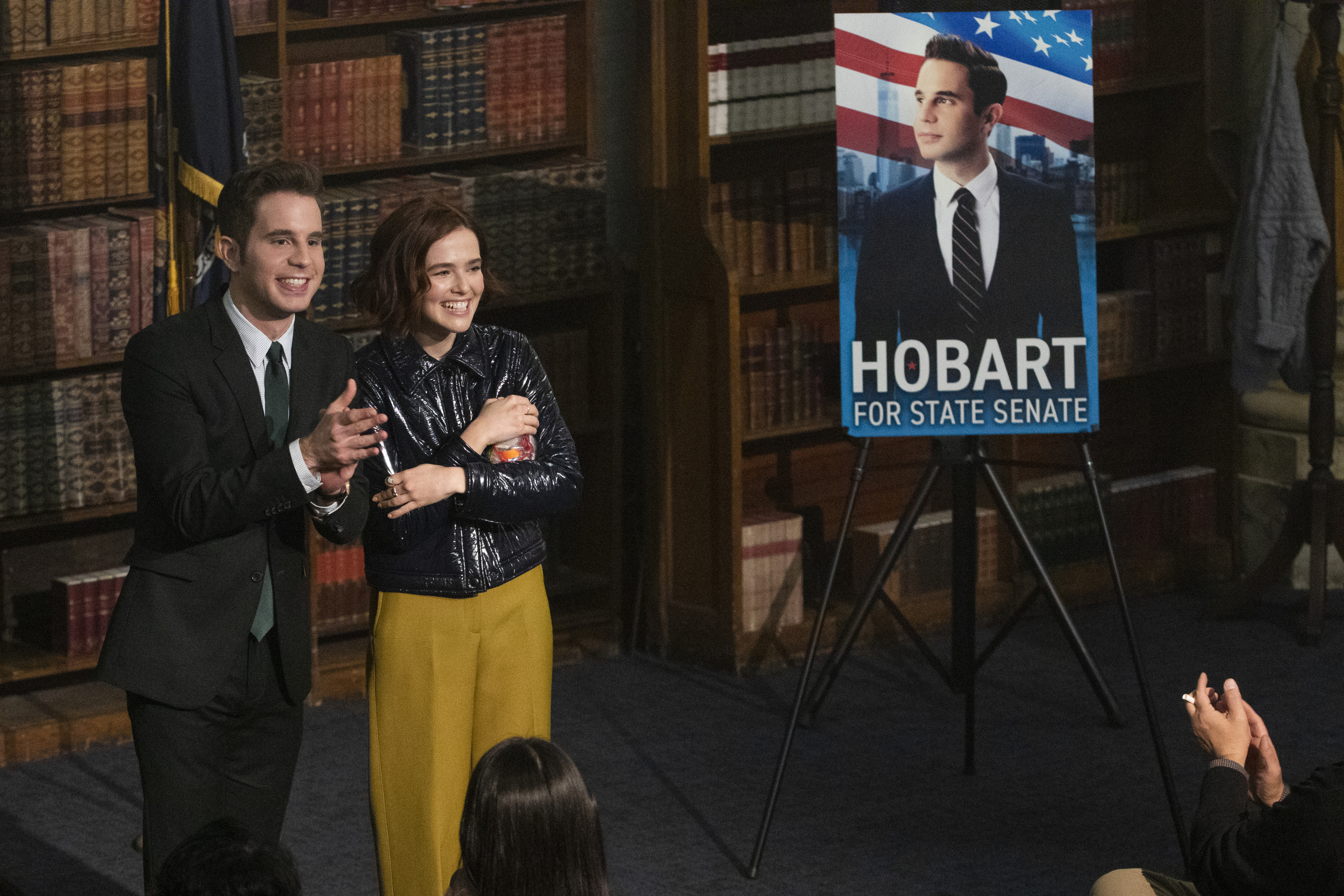 Ben Platt and Zoey Deutch in “The Politician”

Why Should I Watch? Weeeeeeeeell… that’s a good question. The first season of “The Politician” is both very watchable and very empty; a show about teens prematurely acting like adults, whose play-acting also applies to their superficial personalities. It’s a TV show in search of a purpose beyond melodrama, which, given the rapidly shifting state of modern politics, feels far too simplistic a take to sit down with for eight hours. But Season 1 ended with an intriguing leap forward in time and focus, putting the former high school presidential hopeful Payton Hobart (Ben Platt) in a Senate race against a politician played by Judith Light and her chief of staff, Bette Midler. Perhaps elevating the stakes beyond teen fantasy will give Season 2 a better, more pertinent perspective — at the very least, it will be fun to watch Light and Midler’s Old Guard go toe-to-toe with the wokes.

Bonus Reason: Uh, if you want to help Ryan Murphy? So far, the Emmy-winning TV producer’s megadeal with Netflix hasn’t paid off as well for the streaming giant as it has for Murphy. His first official Netflix original series — last month’s “Hollywood” — was savaged by critics and has already dropped off the radar. It also quickly exited Netflix Top 10 lists, being outpaced by other, far less costly melodramas like “White Lines” and “Outer Banks.” (“Hollywood” lasted less than three weeks in the TV Top 10 and never topped “Outer Banks,” which is in its sixth week on the list right now.) Meanwhile, the first season of “The Politician” (which was produced when Murphy was still under contract with Fox) didn’t make much of a dent in the zeitgeist, and earned just two Golden Globe nominations (as opposed to the many guild awards it went after). Dropping Season 2 less than a year later gives the impression that the series is on life support — both seasons will be Emmy eligible, and the late-arriving sequel seems to be a last-ditch attempt to boost awareness before voting.

The Rest of Incoming TV

series 7 New Netflix Shows in April 2020, and the Best Reasons to Watch