Husband-and-wife documentary filmmakers Sushmit Ghosh and Rintu Thomas were looking for the right subject for their first feature when they came upon a photo story about a lower-caste Dalit journalist in Uttar Pradesh. She stood out in an area where journalists are usually male and from the dominant caste. “I needed to know more,” said Thomas on a Zoom call (below). “We met them and were invited to a meeting.”

That memorable scene is included in “Writing with Fire,” a sleeper success playing at over 100 festivals that ultimately landed a North American distributor (Music Box) as well as a surprise Documentary Feature Oscar nomination. The film focuses on Meera Devi, a pioneering lower-caste woman journalist who teaches other Dalit women how to use their iPhones as a tool to interview, photograph, and post video footage online.

“We walked into a beautiful moment in time,” said Thomas. “Most of the women had never touched a smartphone. They had a naive energy and excitement and a surprising clarity of vision. Dalit women were framed in a certain type of narrative. I felt like these women had rescued themselves from the tyranny of that narrative. This story had to be told; it could change the perception around the power of women, inverting India’s own social pyramid. Dalit women are at the bottom of the political social hierarchy.”

The reality of venturing into a hot and arid region with film equipment fell hard on cinematographer Ghosh, who brought the film crew the team had worked with for a decade. “We were working in regions with an average temperature of 98-100 degrees,” he said, filming in a region rife with illegal mining belts. “Dust was all over us all the time. We realized we had to be a small, one-camera crew with a bag of lenses. We shot handheld with no boom mic. The spaces were hostile and traumatic, so our presence had to be as minimal as possible. We couldn’t stand out.” 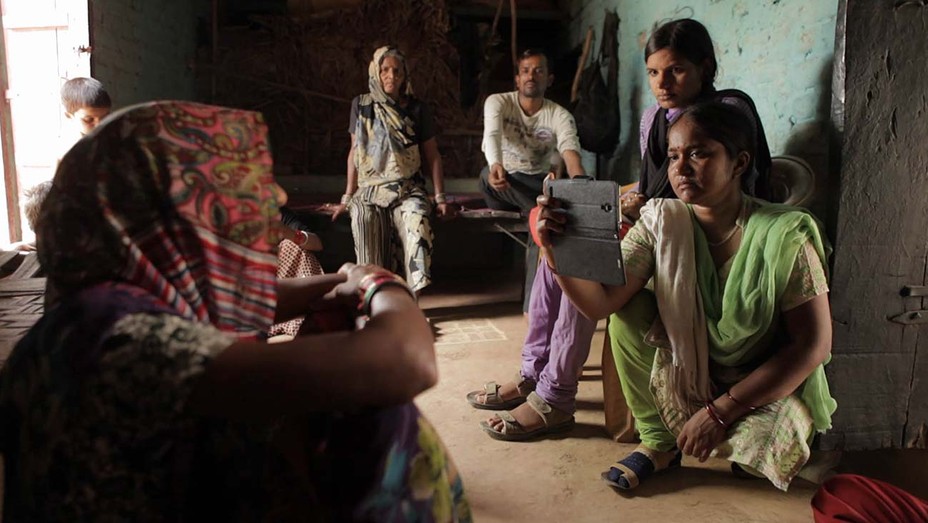 From that first training session, Ghosh and Thomas realized, “this is going to fly,” said Thomas. “We were standing at a station with a train already moving.” They stayed on that train for four years; the movie was completed in five.

The Dehli-based filmmakers also recognized that they came from positions of privilege divorced from the daily reality of their citizen-journalist subjects. They tried to embed themselves to shoot the story from the inside, rather than outside. The women journalists showed a flair for inserting themselves into challenging situations, negotiating both with their families at home and outside in the world as well, which was often dangerous to low caste women, the victims of more violence than anyone in India society.

“Day in and day out, they were working with the toughest odds,” said Thomas. The women saw that they were the only ones who would cover “the toilets in the maternity ward that won’t function if [they] don’t report on it. We saw them transforming in front of the camera with the power of the internet: ‘I’m here with the camera, you better speak to me.’ Everything started changing. It was amazing to capture that.”

As the journalists filmed their subjects, they were subjects for the filmmakers. “Frames within many frames,” said Thomas. “When we sat down to edit, new layers unraveled. We were discovering new things every time we went to the footage.”

Shosh and Thomas studied together in film school; after they graduated in 2008, they launched production company Black Ticket Films, hoping to change the conversation around nonfiction in India. They were interested in stories, said Ghosh, “of outliers on the margins creating tectonic shifts. Can it be sexy to engage and entertain and educate? Can you design impact around that? A story told well pulls at your heart and can push you to think of the world in a different way.” As they filmed, the website Khabar Lahariya — India’s only newspaper run entirely by women — exploded in popularity and hit 1 million views in the second year; its growth continues to be exponential. The reporters expanded their reach and delved deeper into the community, using smartphones as “a force shield,” said Ghosh. Before the penetration of video on the internet, “the literacy barrier was massive,” said Thomas. “They rode that wave with diversified kinds of programming. It had a cumulative effect. They built so much trust, despite the belittling and mansplaining from their male colleagues. Whatever access they got, we got.”

Thomas and Ghosh admired the growth of Devi’s team of women reporters. “That’s how to get transparency in a democracy,” said Ghosh. “We were shining a light on what a good journalist should be.”

After the movie won the audience award at digital Sundance 2021, it didn’t take long for star journalists like the Philippines’ Nobel prize-winner Maria Ressa, CNN’s Christiane Amanpour, and Gloria Steinem to show support. Social media also helped spread word of mouth. An Oscar run was uncharted waters for the filmmakers, but they booked the film at Film Forum in New York over Thanksgiving, which held the documentary for an extra week.

“The film had broken so many barriers,” said Thomas. “‘Let’s see where we can reach, building on that love, making sure more people are watching the film.'”

Ghosh figures audiences responded to the film as “a narrative of hope,” he said. “While we’re living in a fractured world, it’s still a narrative of resilience.”

“Writing with Fire” will make its television debut on PBS’s Independent Lens the day after the Oscars, March 28, 2022.

In conversation with Editor-at-Large of IndieWire Anne Thompson from Black Ticket Films on Vimeo.
Click to expand...