One week after the box office experienced decade lows, the fall film festivals have come to save the day, premiering dozens of new movies that hope to bring audiences back to theaters and maybe even win some awards.

At the opening day brunch, Telluride attendees were already chatting about what they have heard of the films that premiered out of Venice, which had kicked off two days ago. Naturally, the conversation turned to a couple of projects that also happen to be at Telluride as well.

While there is still much excitement for “TÁR,” which will close the Cate Blanchett tribute on Saturday night, the previous day’s wave of divisive reviews for “Bardo” had brunch goers wondering whether or not they can power through its ever-evolving runtime (there were whispers that even sure exceeds the 174 minutes listed on the program guide).

One person who is powering through the experience is director Alejandro González Iñárritu, who had just flown in from Italy and came straight to the brunch. One could not tell the filmmaker had just had such an arduous trip, as he kept a sunny disposition being surrounded both his family members and his cast (who kind of all blend together given how much of his personal story he is telling through the film). He did say he plans on getting some rest during the day though, in order to make it to the first “Bardo” screening at 8:45 p.m.

Exploring more of the picturesque locale, there was one enviable corner across from the gift bags, and near a little photo op with a cardboard cutout of former German chancellor Angela Merkel (the documentary “Merkel” is playing at the festival), where Robert Downey Jr. was cycling through conversations with press, other actors like the young stars of “Tori and Lokita” and “Close,” and even the sales agent for his documentary “‘Sr.’” about his late father. The film, which is produced by his wife Susan Downey and directed by Chris Smith, reportedly has offers from HBO, Amazon, and Netflix already.

“The Avengers” star, dressed in a cozy get-up complete with red sweatpants, shared that this is his third Telluride, the last two each being decades apart from each other. He first tagged along to support one of his dad’s films in the late 70s, then came on his own to promote “Two Girls and a Guy” in 1997. Downey also openly joked about not looking forward to people seeing how he looks in “‘Sr.,’” comparing himself to a bloated elf, but followed the suggestion of Smith to stay mum about why the title of the documentary includes quotation marks. 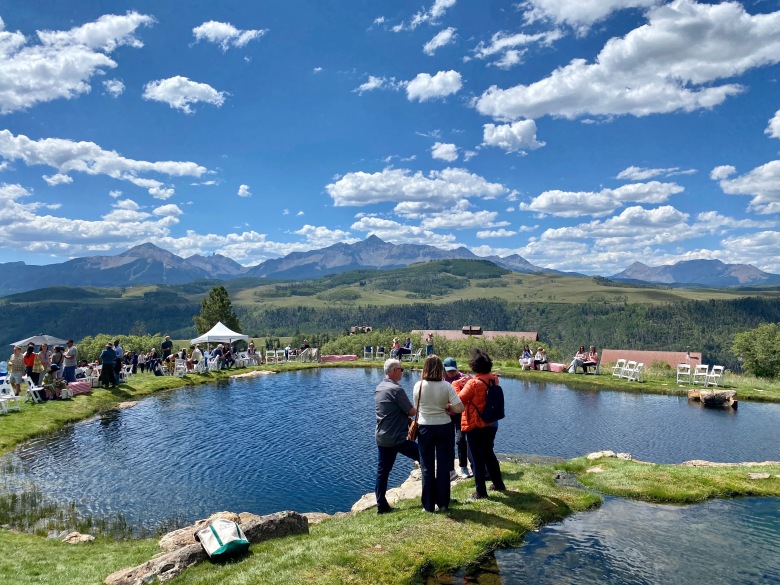 The scene at the 2022 Telluride Film Festival Patron Brunch

If there was a consensus about the one film that Telluride attendees are dying to see, it would be “Women Talking.” As star Rooney Mara roamed the area serving food, the film’s producer Dede Gardner struck up a conversation with “Armageddon Time” actor Jeremy Strong, who expressed lots of interest in seeing it. Elsewhere, director Sarah Polley said she was excited for the upcoming tribute to her, “but I’m really afraid I’ll say something stupid.”

The last of the three filmmakers receiving a tribute, documentarian Mark Cousins, was also at the brunch talking to director Sally Potter, in Telluride to present a restoration of her film “Orlando.” The pair took a selfie to send to mutual friend Tilda Swinton.

Finally, the two attendees that elicited the most curious “why are they here?” reactions were actor Paul Mescal and his partner Phoebe Bridgers, a Grammy-nominated rock musician. Mescal has two films coming out this fall—”God’s Creatures” and “Aftersun”—but neither have been announced as playing at Telluride. The assumption is the latter will fill one of several TBAs on the schedule.

At the press briefing, the festival’s executive director Julie Huntsinger told IndieWire that author and former Telluride attendee Salman Rushdie has “rebounded quite well” from being the victim of a stabbing attack earlier this month. A guest director in 2001 who was brought back for the 40th anniversary, Huntsinger added that she hopes he can come back for the festival’s 50th anniversary next year. She also revealed that the festival will mark the occasion by adding an extra day next year, eliciting applause from the audience.

More importantly, the festival director gave an idea of her thought process going into the future of Telluride, saying “We’re in a transition time, everywhere, the festival, the world, everything. We’re about to turn 50 next year. I want to set us up for the next 50.” As this year’s festival gets going, she has already promised that next year “I’m going to try and pull out all the stops.”

news ‘Wildcat’ Trailer Follows a Veteran, a Ph.D. Candidate, and an Ocelot Into the Amazon

news Consider This Brunch: ‘Bardo’ Was as Personal for Its Cast as It Was for Iñárritu