Here we are, halfway through the month of January and there’s no better time to take a moment and check-in on the state of TV’s winter awards season (and beyond.) Just this week saw the announcement of Golden Globe winners, in addition to nominations for both the Writers Guild Awards and the Screen Actors Guild Awards. Plus, the nominees for the Critics Choice Awards and Indie Spirit Awards are still outstanding, so here’s where things stand heading into upcoming weeks, which will see nominations for the ACE Eddie Awards, Annie Awards, DGA, and PGA, to name a few.

But before we get too far into it, while there has been a lot of love lavished on shows including HBO Max’s “Hacks” or HBO’s “Mare of Easttown,” the TV this story will be focusing on are shows that are in the mix for the rest of the aforementioned winter awards season (and beyond.) What that means is that shows whose eligible seasons have already competed at last year’s Emmy Awards won’t be included, as there just wouldn’t be enough room to make sure everyone got equal playing time.

Let’s first examine those shows that we’re guaranteed to be talking about in upcoming weeks and well into Emmy season itself. We’ll call them our sure things. Seeing as there’s still a lot of clock to play out, this is where we’ll be the most conservative with our choices.

First on the list, Apple TV+’s “Ted Lasso.” Following a stellar showing at the 2021 Emmy Awards, everyone’s favorite inspiration football coach is back in the saddle, ready to ride the show’s second season all the way to September, with nary a hitch in its giddy-up. The comedy series continues to feel the love, as evidenced by Jason Sudeikis’ win at the Golden Globes (for as much as such an accomplishment is worth these days), plus a nomination from the writers guild in comedy series and four nominations from the Critics Choice Association. Where “Lasso” saw the most traction thus far, however, was with the Screen Actors Guild Awards, where it nabbed five mentions, one for the show’s ensemble in addition to individual nominations for Sudeikis, Brett Goldstein, Juno Temple, and Hannah Waddingham.

Mark it down now, “Ted Lasso” will still be the comedy to beat in upcoming months. 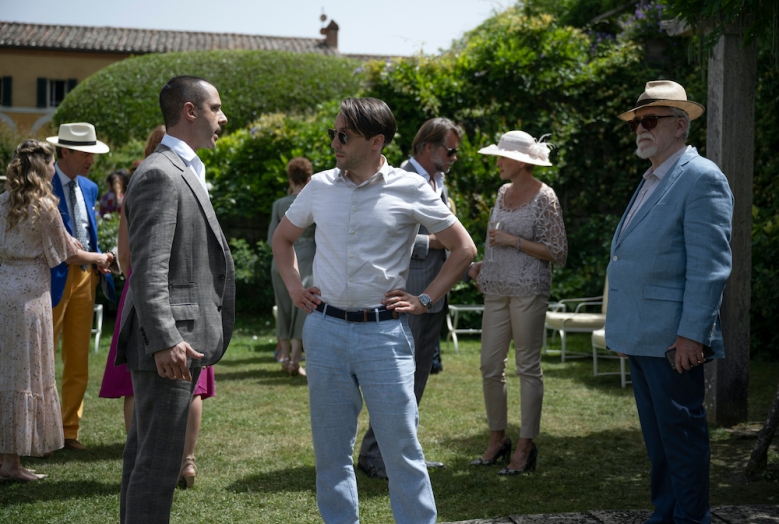 Drama programming has its sure thing locked and loaded as well. Despite going almost two full years between seasons, HBO’s “Succession” hasn’t missed a beat, narratively or awards-wise. At the Golden Globes, the series took home prizes for Jeremy Strong, Sarah Snook, and the series itself. As far as other mentions have gone this week, “Succession” was nominated twice by the writers (for series and “Retired Janitors of Idaho”) and five times by the actors (for Strong, Snook, Brian Cox, Kieran Culkin, and ensemble), and eight times by the Critics Choice Association, suggesting that, as previously suspected, this is the Roy family’s world and we’re just living in it.

But there’s plenty of new blood skulking around, looking to make a significant mark on the awards to come, two in particular which seem to have distinguished themselves.

On the comedy side, Hulu’s “Only Murders in the Building” has proven itself a crowd pleaser, particularly with awards bodies. With regards to the Critics Choice Awards, the series nabbed four nominations, for all three lead actors (Steve Martin, Martin Short, and Selena Gomez) and comedy series. On Wednesday, the series added three SAG nominations to their haul, for ensemble, Martin, and Short. And on Thursday, the series pulled off the WGA trifecta, earning nominations in comedy series, new series, and episodic comedy. I suspect we’ll be hearing about “Only Murders” a lot in the weeks and months to come. 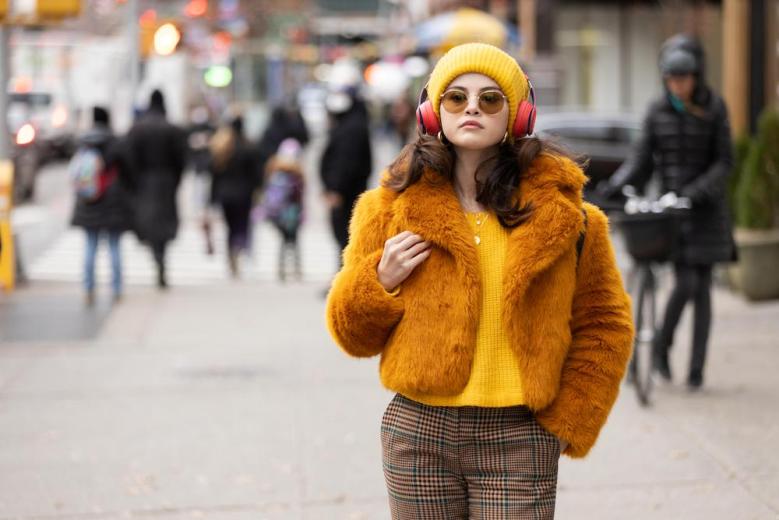 Selena Gomez in “Only Murders In The Building”

Similarly, Netflix’s “Squid Game” has already had a remarkable effect on the awards landscape in addition to being a global phenomenon. Over the last few months the series has garnered two nominations at the Gotham Awards (breakthrough series – long format and outstanding performance for Lee Jung-jae), one Indie Spirit nomination (male performance for Lee), three Critics Choice nominations (drama series, foreign language series, and actor in a drama series for Lee), and four SAG nominations (for ensemble, stunt ensemble, Lee, and Jung Ho-yeon). On top of all that, O Yeong-su won the Golden Globe for best supporting actor. This juggernaut is showing no signs of slowing, much less stopping, which is an incredible trajectory to watch, particularly for a non-English language series.

Of course, as we’re discussing all of this, it gets a little nebulous in certain areas, including limited series. It seems as though a disproportionate amount of nomination spots are being taken up by limited series that have already competed at the Emmys and it isn’t totally clear if the industry is wildly enthused about anything in particular. Showing up most consistently, however, has been Netflix’s “Maid” and lead actress Margaret Qualley, Hulu’s “Dopesick” and lead actor Michael Keaton, and HBO’s “White Lotus” and lead actor Murray Bartlett.

For now, let’s move on to my favorite weirdos, those shows hanging out on the fringes where it’s not clear if they’re going to accelerate into the light or fade into the night as awards season intensifies.

First up might be the contender that I’m most confused about overall: Apple TV+’s “The Morning Show.” Despite not getting appreciably better reviews than its first season, the drama series appears to be striking a nerve for some (but not all) awards bodies. The series garnered two nominations from the Writers Guild Awards, for drama series and episodic drama (“La Amara Vita”). The show had no WGA noms for its first season. Further, the show scored four nominations for the Screen Actors Guild Awards for Jennifer Aniston, Reese Witherspoon, Billy Crudup, and its ensemble cast. But for the Critics Choice Awards, where people who love TV really love TV, only Crudup was nominated. In short, it’s weird. I can’t get a bead on it and I love that for everyone. 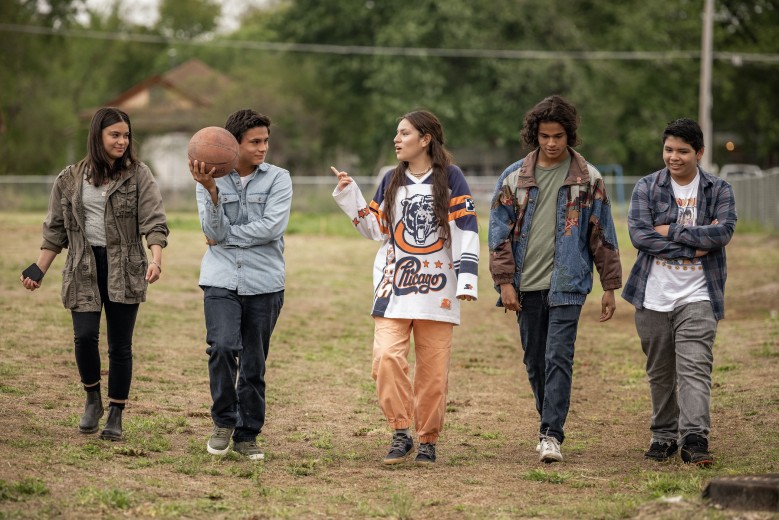 Next is FX’s “Reservation Dogs,” a distinctive comedy series following four Indigenous teens on an Oklahoma reservation. Both the Gotham and Indie Spirit nominations had love for the show, with two nominations (breakthrough series – short format, which it won, and outstanding performance for Devery Jacobs) at the former and one nomination (scripted series) and one juried prize (ensemble cast) for the latter. “Reservation Dogs” only got one nomination for the Critics Choice Awards, but that one nomination was for best comedy series. It missed completely for the SAG Awards, but nabbed two Writers Guild Awards (new series and episodic comedy for the pilot, “F*ckin’ Rez Dogs”). Any time the series seems to be picking up speed, things slow down. When its buzz threatens to die out altogether, it reappears on the scene. It’s chill like that.

Speaking of buzz, the final wildcard show might have the most awards buzz yet, but it definitely has people talking. Showtime’s “Yellowjackets,” featuring a championship girls’ high school soccer team stranded in the wilderness by a plane crash and the events that unfold after (as well as extremely after, as in 20 years later) the plane went down. Also, there may or may not be cannibalism. Still up in the air. The point is, “Yellowjackets” has only been showing up on the fringes of the awards scene, like a wild animal stays just outside the light of a campfire. The show received two nominations for the Critics Choice Awards, for drama series and actress in a drama series (Melanie Lynskey) and two nominations at the Writers Guild Awards, for drama series and new series. “Yellowjackets” had a relatively late 2021 premiere (November 14) and its conceivable that it didn’t have enough time to build up a fervor by the time voters were filling out their ballots. Maybe this is as hyped as things get for the series, but don’t say I didn’t warn you if it becomes an apex predator on the awards scene.
Click to expand...

Sunday at 8:19 AM
indienews