Sundance has long been a place for people who are searching. They could be looking for a first shot or a last chance, a new home or a lost love — and offscreen, their creators tend to be in search of something, too, be it a breakthrough into the biz or a boost to their artistic credibility. What a character wants is a great place to start for any movie, but the Sundance Film Festival — held way out in Utah, requiring a scenic trip for almost every badgeholder — tends to embrace subjects who can’t answer that question. They don’t know what they want. All they know is they’re eager to find it.

This year, in the Indie Episodic program, characters are searching for answers. The six distinct entries in the 2022 lineup of independent TV pilots are bound together by a few themes: Most center on women. Childhood reflections play their part, as do early emergences into adulthood. Every project sports at least one extra Sundance-y plot point, be it an assassin dressed like a preacher, a blunt, location-based metaphor, or a secret Sea Monkey formula. But the section’s predominant pattern is exploring the past in an oft-futile quest to fix, or better understand, the present. Goals sought, if met, guarantee little or offer little guarantee. What’s driving these characters is a desire to exit a stagnant state and emerge into something, anything, different. It’s a feeling audiences should have no trouble identifying, given the pandemic purgatory we’ve been in since long before the last Sundance, not to mention the general unease, if not outright despondency, regarding the future on the whole.

Program highlight “Chiqui” turns the clock back to the 1980s, when Ruth “Chiqui” Baretto (Brigitte Silva) and her husband Carlos (Sebastian Beltran) move from Medellín, Colombia to the United States in search of a brighter future. The 30-minute pilot sees the couple couch-surfing across the upper East Coast, moving from a cramped friends’ home in New Jersey to her sister’s place in Long Island with a private pool. There, Chiqui gets to borrow Judy’s (Catherine French) colorful wardrobe, while Carlos is promised a job hook-up from Ted (Greg Prosser). Things are looking up.

At night, Chiqui watches television, staring at an attractive pair riding off into the sunset on a motorcycle. She’s an ambitious dreamer, steadfast in her convictions, and you can tell how badly she wants to succeed even when she’s not berating her husband for holding them back by holding onto their old life. (His calls to his mother back home become an amusing, then dramatic, recurrence.) Still, setback after setback leave the duo in dire straits by episode’s end. Chiqui manages to recreate the image of freedom she sees on TV, but the closest she comes to the American Dream is a package of frozen chicken branded as such.

Out West, Kate Bosworth is similarly adrift in “Bring on the Dancing Horses,” an hourlong premiere about a contract killer (Bosworth) driving through magnificent vistas in between murders. Knocking on the doors of “Sopranos” star Joseph R. Gannascoli and everyone’s favorite android Lance Henriksen, only to walk inside and “help with [their] transition” — to hell, presumably — the opening episode also flashes back to the assassin’s adolescence, when she started working for her father in the business of death. “He was in charge of the hits on the jukebox,” she says. “I did it for a song.”

There’s a lot missing from the drawn-out opening episode, both intentional and otherwise. “Bring on the Dancing Horses” is one of the rare independent TV projects to shoot an entire season, rather than just a pilot, and creator/director Michael Polish will undoubtedly fill in his killer’s missing backstory in the remaining nine episodes. Why she kills who she kills, as well as what led her to a lonely, bleak life she claims to enjoy are nagging questions glossed over initially with overwritten dialogue and confounding logic. One of the risks in producing an entire season, rather than an opening sample, is that intrigued buyers may not be able to maneuver the story’s next steps as much as they’d want to; instead of potential, “Bring on the Dancing Horses” depends on viewers wanting to watch Bosworth give the same Angel of Death speech to different targets, again and again, until a reason to invest in her quest becomes clear. 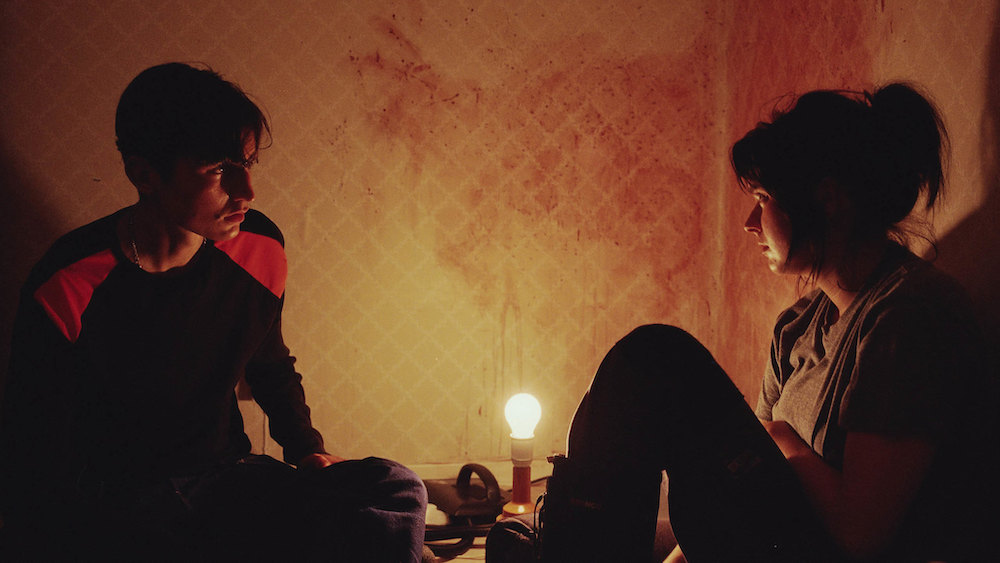 Courtesy of the Sundance Institute

“My Trip To Spain” finds another woman in stasis, though Alexis (played by writer/director Theda Hammel) is desperate to break free. About to leave on the titular trip — where she’s seeking facial feminization surgery — the home-owning trans woman welcomes a friend to mind her place while she’s gone. Charlie (John Early) has been holed up in his New York studio apartment for the past year, terrified of the pandemic, and he’s soon spilling his guts to Alexis as they share a quick, pre-flight lunch in the backyard. “We do not understand ourselves well enough to improve [ourselves],” Charlie says to his exasperated friend. “You think this is some sort of extravagance,” she counters, stressing the importance of her impending procedure. “This is a necessity!”

Meanwhile, as the two parties debate Alexis’ transformation, Bruno (Gordon Landenberger) is working on the house, repairing the repairs Alexis started earlier in the pandemic. Every overheard point about her appearance is accompanied by the whirring of machinery and clomping of wood that come with remodeling a house. Hammel’s roaming camera — sometimes pointedly narrowing around each character to create informative framings, other times floating around the house until a point of interest comes into focus — establishes a wistful atmosphere, supporting the testy discussions and fleeting moments of humor. Alexis and Charlie are trapped in a house in need of improvement, and the house, in turn, is trapping two people desperate to improve themselves.

Two more of Sundance’s Indie Episodic entries see two women waiting on fortunes once promised them. The stranger option by far is “Instant Life,” a three-hour documentary series (being sold by a24) tracking Yolanda Signorelli’s pending lawsuit against Big Time Toys — an attempt to retain the rights to her beloved Sea Monkeys. Yes, those Sea Monkeys. Yolanda’s husband, Harold von Braunhut, invented the product, and the two of them turned it into a healthy business. Not only that, but Harold and Yolanda kept the secret formula for creating the creatures to themselves — a decision which saved their business when, after Harold’s death, Big Time Toys tried outsourcing production to China and cutting Yolanda out entirely.

But that’s just the bookends for a very peculiar docuseries that bounces between Yolanda’s impoverished state in 2016 — living without power, feeding her pet raccoons, inviting every “Grey Gardens” comparison you can think of — her beginnings as a model, and her husband’s disturbing descent from a self-hating Jew to a full-blown Nazi. (He added the “von” to his name to sound more German.) Not always cohesive and drowning in extraneous material, “Instant Life” nevertheless makes moving points about the value of life in any form, as well as the people who would rather eradicate it.

Then there’s “The Dark Heart,” a Swedish true crime thriller that follows Sanna (Clara Christiansson Drake), the daughter of a wealthy landowner who returns from college with big plans for the family business. The only problem: Her father, Bengt (Peter Andersson), is tied to his way of doing things. Frustrations mount, but things really get heated when Sanna falls for Marcus (Gustav Lindh), a young man on a neighboring farm whose family is a sworn enemy of Bengt’s. As all this happens some two years in the past, “The Dark Heart” follows Tanja (Aliette Opheim) as she leads her Missing Persons volunteer unit on a case to find… Bengt, who’s been missing for two years.

“The Dark Heart” doesn’t dwell on the mystery of what happened to Bendt so much as it magnifies the power of stagnation. Sonna can’t stand working the land with one hand tied behind her back, just as Tanja grows irritable when her search keeps coming up empty. Neither has the power they crave (Sonna to make decisions for herself and the farm, Tanja to be trusted in a manner befitting her passion), nor is either of them given an accessible path to obtain it. How their stories overlap is intriguing, even if “The Dark Heart” puts a stronger emphasis on Sonna over it’s first three episodes, and there’s little to no suspense regarding either woman’s fate.

Of the program’s six titles — up from four in 2020, but down from eight in 2019 — “Culture Beat” is the odd man out. Only five minutes long, the prank show (produced by Eric Andre) stars Andre Hyland as three sketch characters: One is Cory Palmer, the episode’s sunglasses-sporting, energy drink-sponsored host, who goes to various local art retailers to ask, “What is art?” Edited down to nothing from that all-too-broad starting point, the reactions garnered from the real shop owners are minor compared to typical prank shows, and the even shorter appearances by Hyland’s alter egos Phil Gower (an earthy NPR obsessive who runs into people on his recumbent bike) and Lucas Anonymous (a “Matrix”-obsessed techie who runs over stuff with his segway) are too believable to count as pranks. They’re closer to reenactments of characters you might encounter in the greater Los Angeles area. (But hey, at least none of Hyland’s men are mean-spirited.)

This year’s Indie Episodic class is an admittedly sporadic bunch. Searching for answers is a broad theme capable of housing most stories, and now is already a time when viewers are more prone to project their own circumstances onto narratives. Sundance went virtual again in 2022 to accommodate audiences who remain stuck inside — for safety, for warmth, for basic childcare — and, no matter the reason, their perspective is even more affixed to whatever’s going on inside their own heads. But these titles are still straining to better understand the current moment. Maybe it’s by delving into history, where difficult discussions and acknowledgements still have to be reckoned with; maybe it’s a personal journey that’s needed to better understand what may help us, individually, in the present; maybe it’s recognizing the immediate value of a good chuckle, like when a well-meaning bro asks an art dealer if his “Blade 3” drawing is good enough for the gallery.

Whatever you glean from this year’s program, know you won’t be learning it alone. TV is a conversation, and conversations evoke change. Here’s hoping by next year, we can have more of both — in person.

The Indie Episodic Program is now available to watch virtually at the 2022 Sundance Film Festival.
Click to expand...